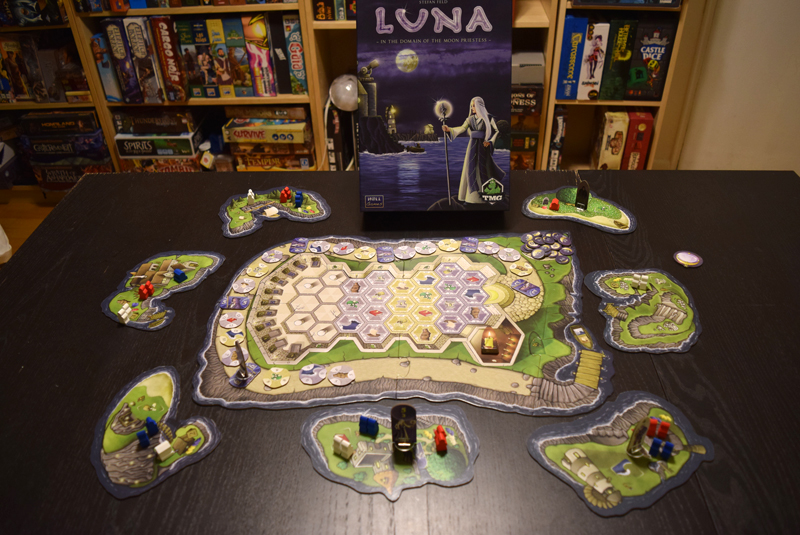 Luna, by Tasty Minstrel Games and Stefan Feld, is a pretty special game.  Something of a masterpiece of indirect competition, Luna combines area control, area influence, and worker placement mechanisms into a truly unique whole.  With no hidden information, no dice, and no cards, the game delivers a solid Euro experience, full of decisions and bereft of the chaos that I, admittedly, enjoy so much.

Andrew:  While it is true that I sort of worship chaos and adore my dice, I find myself really enjoying Luna.  There are a bunch of reasons why, but first a really quick summary of gameplay.  And I mean a quick summary; there are a lot of options available to players each turn, and, as always, I want to focus more on the experience of playing, rather than providing a how-to guide.

The story of the game is that the moon priestess Luna (because seriously, with a name like that, what other career could she reasonably follow) is planning on selecting her successor from among the various Orders who follow her in worship (apparently no one had the forethought to just name one of their novices Luna 2 or something).  In order to gain esteem in Luna’s eyes, the Orders (players) send acolytes to the Holy Isles, all hoping to be the one chosen to provide the next moon priestess by garnering the most influence points.

Jess:  We call them Moon Bucks!

The gameboards, representing these isles, will be where your novices toil away, gathering resources, sanctifying temple tiles, and interacting with several non-player characters.  Each isle provides a different resource (Favor tokens), and players can only ever hold a single resource of each type.  Unlike many worker placement games, in Luna, moving your novices from isle to isle will actually expend their action for the turn (unless you get yourself a boat), so placing your workers isn’t as simple as putting them where you need them – you must plan your movements as strategically as you plan your placements, to maximize your precious actions per turn.

Aside from gathering Favors and building Shrines (which are worth points and provide discounted actions for players who build them), players can send their Novices to the Temple Isle (that giant thing in the middle).  Along the path to the Temple are a series of tiles, arranged in ascending numerical value.  Watched over by a guard, these tiles can be sanctified by your Novices, moving them from the trail to the Temple proper.  This action causes any opposing novices adjacent to the tile you are placing (who are on tiles of a lower value than yours) to be ejected from the temple.

The Novice who sanctifies a tile stays with it, providing victory points each round, as well as some immediate points based on how far along the path the Guard has advanced.  Taking this action earlier in the game rewards you more, but since your Novices will be on tiles with lower numbers, they will be easier to knock out of the Temple.

Jess:  The whole ‘sanctify tiles’ action was probably the most finicky part of Luna’s gameplay to absorb.  It’s not really complicated, but it’s sort of tough to clearly explain in just a few words.  But, like all of Luna, once you get your brain around it, the potential for huge points and clever placements will quickly become apparent.

The final element of Luna are the Non-player figures which move around the island.  The one on the Temple Isle, the Guard, sets the value of temple tiles, as well as acting as a game timer.  The other three, the Priestess, the Master Builder, and the Apostate, play a much more active role.  The Priestess awards points to the player who holds majority on the island upon which she ends the round.  The Master Builder needs to be present for players to be able to build Shrines.  Finally, the Apostate-

Jess:  Is a jerkass.

Andrew:  I have no argument there.  This jerk will cost players their precious influence points-

Andrew:  …will cost players their precious Moon Bucks if he ends the round on the same island as their Novices.  Jerkass that he is.

Speaking of rounds, a game of Luna only lasts 6 six of them, after which everyone adds up their Moon Bucks and declares a winner.

Andrew:  Ok, so that’s the short of it, and that’s not getting into the Book of Wisdom or the Council track or anything else.  But even though there is a lot here, once you take it all in, it’s really not that complicated.

Jess:  I agree.  While it may seem like there are a lot of options and interlocking gameplay mechanisms (and there are), the fact is that once you get into it, Luna runs really smoothly and, aside from playing alongside some folks who suffer from Analysis Paralysis, a session of Luna should be delightfully brain-burny without being overly dense.  Your second game will take 30% less time than your first, for sure.

Andrew:  Luna is a highly strategic game, but in our playthroughs, I didn’t feel like it suffered too much from the need for ‘optimized’ decisions.  There are lots of paths to points, and what works best shifts situationally, but not so chaotically that you can’t plan ahead.  If anything, Luna encourages you to think one or two actions ahead, but not to try and plan your whole game out in the first round.  It’s forgiving, but not overly so – balanced, is what I’m saying.

Jess:  Yeah!  And it rewards you constantly; I never felt like I wasted a turn, but it’s also not the kinda game where you can just sit back and do whatever and expect to come out on top.  And it’s not solitaire – even though you won’t be blowing up your opponent’s acolytes, the decisions one player makes will absolutely impact the rest, which makes it even more engaging.

It’s true – Luna isn’t a ‘take that’ game by any stretch, but there are definitely options for messing with other players a bit.  Though, in fairness, our playthroughs only really saw these tactics used once or twice – usually the most aggressive thing a player can do is spend their action ticking down the round timer, shorting other players (and themselves) on the opportunity to make big plays.  It can feel a bit cut-throat, but nowhere near the viciousness of other games.

Luna is a beautiful game.  TMG’s print of it delivers big tiles with pretty illustrations, excellent physical layout, and sturdy bits.  Our only material complaint is that the colors of some of the temple tiles are just a little too close to each other, making one small aspect of setup mildly annoying.  Otherwise, the game looks great and those islands surrounding the central temple have great table presence.

Andrew:  It isn’t going to be a game I break out for true newbies, but Luna strikes me as an excellent game for people who are developing a taste for the delicious gameplay offered by Euro-style games.  It’s not a gateway game, to be sure, but nor is it so complex as to hedge out newer players.  And for someone like me, who likes his game light and engaging, Luna still manages to bring serious strategic gameplay to the table in an inviting, delightfully attractive package.

We think Luna is a really solid, beautifully tuned game and we absolutely recommend it!

(Thanks to Tasty Minstrel Games for getting us our copy of Luna for review.  Though everyone wants their share of influence, no amount of Moon Bucks could have affected our opinions.)

One thought on “Luna Review”