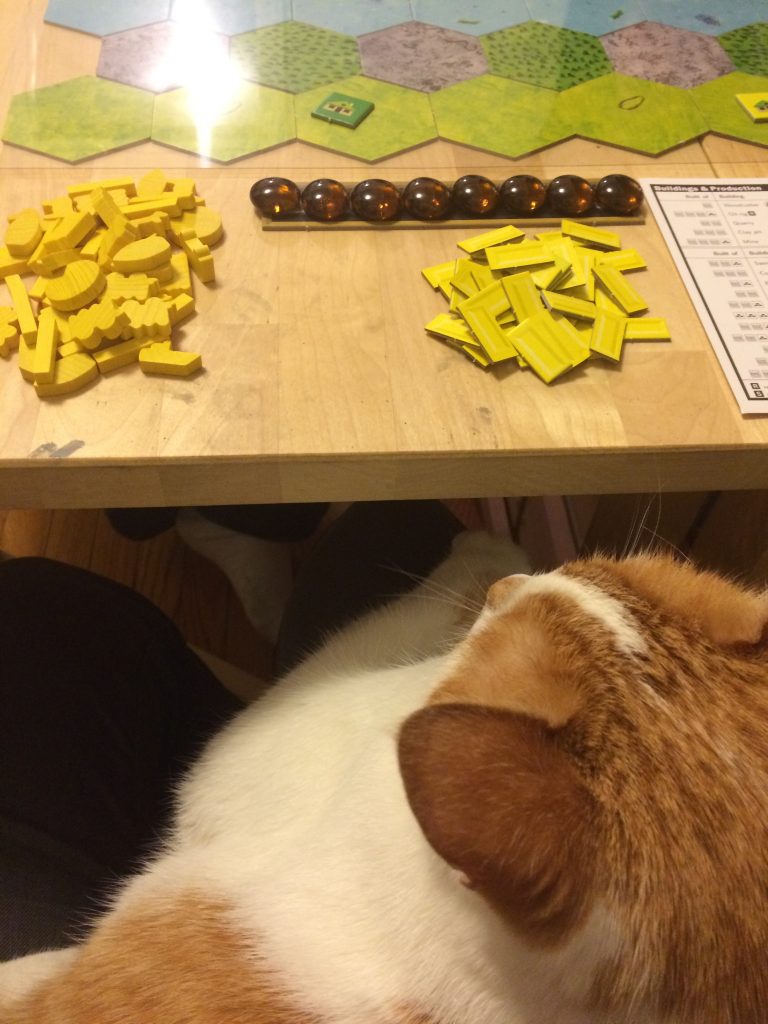 Two years ago, a scathing article called “Gaming with Cats” was published that painted us felines as devious thieves and meddling pranksters who’s only goal is to steal the human’s tasty colorful bits and interrupt their human games. Well, it’s all true! We cats just didn’t realize that the humans had caught onto our ways and were intelligent enough to devise possible counter measures.

It’s beyond belief that a human would want to pay more attention to a pile of colorful bits (that smell nothing like food at all!) than our warm, furry, itchy bellies. But it seems that they do, in fact, enjoy interacting with others of their kind as they gather around the table and move odd bits from one side of a colorful mat to the other. Worst of all, they don’t want us involved in any of this.

Fear not, my feline brothers and sisters, for I have devised several cleaver ways to insert yourselves into the center of the fun that the humans will never see coming!

These must be very important to the humans, though I don’t know what they’re actually good for. These things are slightly larger than dry food bits and are sometimes shaped like familiar food-like objects, however they don’t seem to be for eating. The humans like to store them in boxes and only take them out when there are more than one of them around. Unfortunately, these bits lead to many hours of ignoring us cats – and even worse, shooing us away! Horrifying.

Humans are very protective of these bits, but I’ve found small windows of time (usually when the humans are first taking the bits out of the box) that one or two can be stolen. If you see an opportunity, move quickly and take all you can fit in our mouth or bat away with one swipe. Move fast and don’t hesitate, which may draw unnecessary attention. Once away I highly recommend hiding the bits either under the couch or, if the couch is too easy for the humans to move, try under the fridge. This action may not lead to immediate petting as the bits seem to be plentiful, however repeating this process over time will deplete the bit pile enough that the game can no longer be played.

Sit on the Table

This requires perseverance and you’ll need to be steadfast in your determination. The humans will do everything they can to move you – up to and including shooing you, pushing you off the table, or picking you up and putting you elsewhere. Stay strong my brothers and sisters! I have had success with this procedure. After being shooed four times, yelled at twice, and picked up and set on the ground four times, my human gave up and let me join the game. I received petting from my human AND my human’s friend. I also made a few choice recommendations to my human, and thanks to me my human was the victor that day.

It would have been better to have the human’s undivided attention, but it was satisfactory.

Be as Cute as Possible

You know what to do. Puff your fur and make your eyes wide; sit like a little statue and purr while staring at your human; make tiny noises that only a kitten should make; turn them into putty in your paws, make them fawn over your tiny jelly bean toes. That’s they way. Yes, yessss! That’s how we prove our superiority over the humans and become their overlords. The next step in our plan to rule is [REDACTED] Um, I mean, that’s how you make them pay attention to you and not their game.

If these three simple suggestions put you in the center of the human attention, find the closest sunbeam, stretch out, and relax with the knowledge that you are cat. You don’t need some silly box filled with bits to keep you happy. Petty humans.