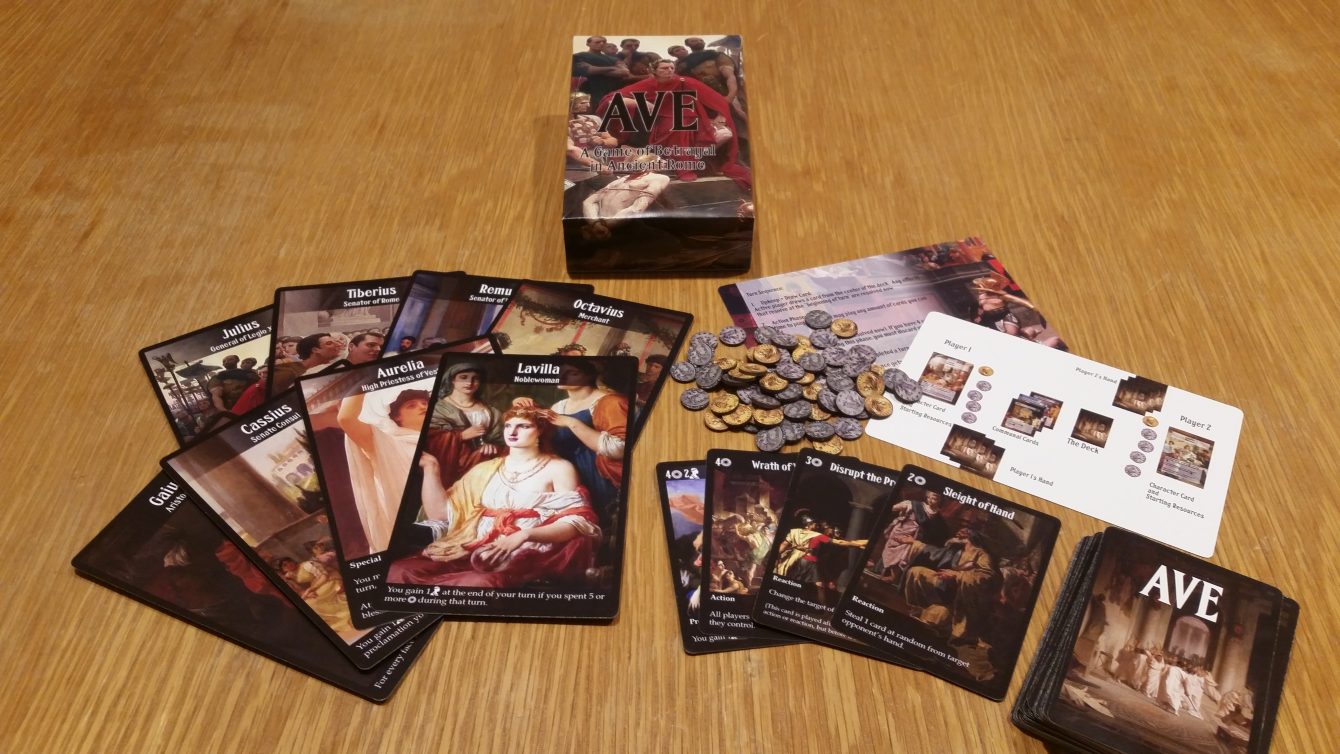 Ave, from Vitsika Games is a game of political intrigue and influence set in the court of the Roman Empire that will be up on Kickstarter shortly.  In Ave, 2-4 players will take on the roles of various persons of interest in the political sphere.  They will gather wealth and power, spending those resources only to garner more, as each vies to become the most influential member of the court.  It is a quick-playing card game, designed to run in under 30 minutes.

Jess:  Political intrigue?  You know I’m not really a fan of politics…

In Ave, each player will start with a hand of 3 cards, 4 Denarii to spend, and 1 Influence token.  On each player’s turn, they will draw a card and then play as many as they want to (and can afford).  There are three kinds of cards:

Jess:  This formula of cards will feel pretty familiar to anyone who has played head-to-head card games before.  They could have been ‘Instants’, ‘Interrupts’, and ‘Enchantments’.

Andrew:  Yeah, but the formula works, so I don’t fault Ave for it.  And ‘interrupts’?  When was the last time you played Magic?

Jess:  It may have been a really long time ago.

Ave does have some mechanical twists that differentiate it from other games of its genre.  First of all, to go along with the ‘intrigue’ concept, players always have the option of putting cards face down instead of playing them normally.  The benefits of doing this are two-fold.  Firstly, face-down cards generally can’t be targeted by targeted by other cards.  Secondly, when cards are played from their face-down position, they cost one less Denarii.  Of course, the drawback is that face-down cards can’t be activated the turn they are placed, so plan ahead!

Another unique mechanical element of Ave is that there are always 3 face-up cards in the center of the table which are ‘communal’ cards.  Every player can treat them as being in their hand, playing them for their cost as needed.  When more than one player wants to play a given card at the same time, a quick bidding round happens, with players bidding their precious Denarii for the privilege of using the card.

Andrew:  Interestingly, cards in Ave can have two kinds of costs – most require some amount of Denarii to spend, but many also require that you spend Influence.

Jess:  And Influence is the thing that we’re all trying to collect – the game ends as soon as one player has managed to scrape together 7 Influence at the end of their turn.  So the most powerful cards often cost Influence to use.  You’re spending victory points, hopefully to make back on your investment.

Andrew:  I actually really like that idea – the high-risk, high-reward nature of spending Influence is a really interesting tactical decision you are constantly assessing, and it’s one of the best things about Ave.

Jess:  Of course, it can also be one of the most frustrating things – investing in a Proclamation like Jupiter’s Blessing costs a bunch of Denarii and Influence, but it can be destroyed by a card that doesn’t cost nearly as much, possibly even before you can benefit from it!  High-risk, high-reward indeed.

Andrew:  And of course there is the fact that, should you lose your last Influence, you are simply out of the game.  It makes spending your Influence that much riskier.  Still, I genuinely like the mechanic.

Now, normally we shy away from take-that style games, and Ave is certainly that sort of experience.  You will be dismantling your opponent’s hard-spent cards just as frequently as you will be building up your own, often robbing them of both Denarii and Influence as you do so.  Some of the cards feel straight-up mean, too, though none felt broken or tremendously overpowered.

Interestingly, there are also a handful of cards which benefit both the player and an opponent.  These cards are interesting in 2-player games and highly strategic in 3 and 4 player games.

The same can be said of the variable player powers – many of them are really interesting, helping you form strategies, like Gaius who gets Influence from revealing face-down cards or Lavilla who earns Influence whenever she spends lots of Denarii.  But then there is Julius, whose power can essentially nuke a player halfway out of the game at great personal expense.  We won’t be playing with him if we can avoid it – his strategy is simply far too aggro for us to enjoy.

However, the game is fast and light, taking the sting out of the frequent impacts you will endure along the way.  Ave often ends abruptly, with a winning play emerging once all the Action-nullifying Reactions have been burned out by previous cards.  It’s definitely a bit brutal, but in a good way.

Jess:  I actually like Ave best as a 2-player game.  While the 3 and 4 player game allows for more strategy, it will tend to become shifting 2-1 alliances that will either ruin one player early on or cause a kingmaker scenario.  That’s not a swipe at Ave, more of an issue with those player counts in take-that games in general, though.  But Ave plays very tightly at the 2-player mark, and that’s where I enjoy it most.

Andrew:  I agree.  Vitsika Games is designing Ave as a ‘living card game’, meaning they plan on adding expansions to the base game.  Hopefully they continue to build on the huge potential the base game demonstrates, ideally by bringing in new characters and cards that let you form different kinds of strategies.

Ave is scheduled to hit Kickstarter on 4/23, costing less than $20 for the base game set (the deluxe version is identical, content-wise, but has nice cardboard chits rather than stock shards for Denarii and Influence).  If a head-to-head senatorial debate is your kinda fun (by which I mean stabbing.  Lots of stabbing), we strongly suggest you head on over to their Kickstarter and check it out! 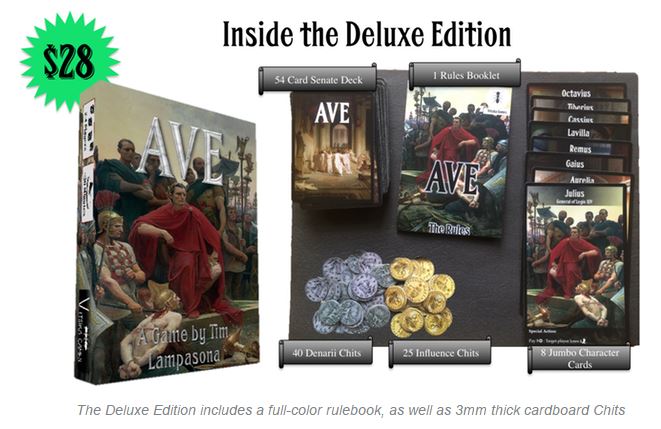 (Thanks to Vitsika Games for providing us with our prototype for preview.  No amount of denarii could have gained influence over us (not that they tried))