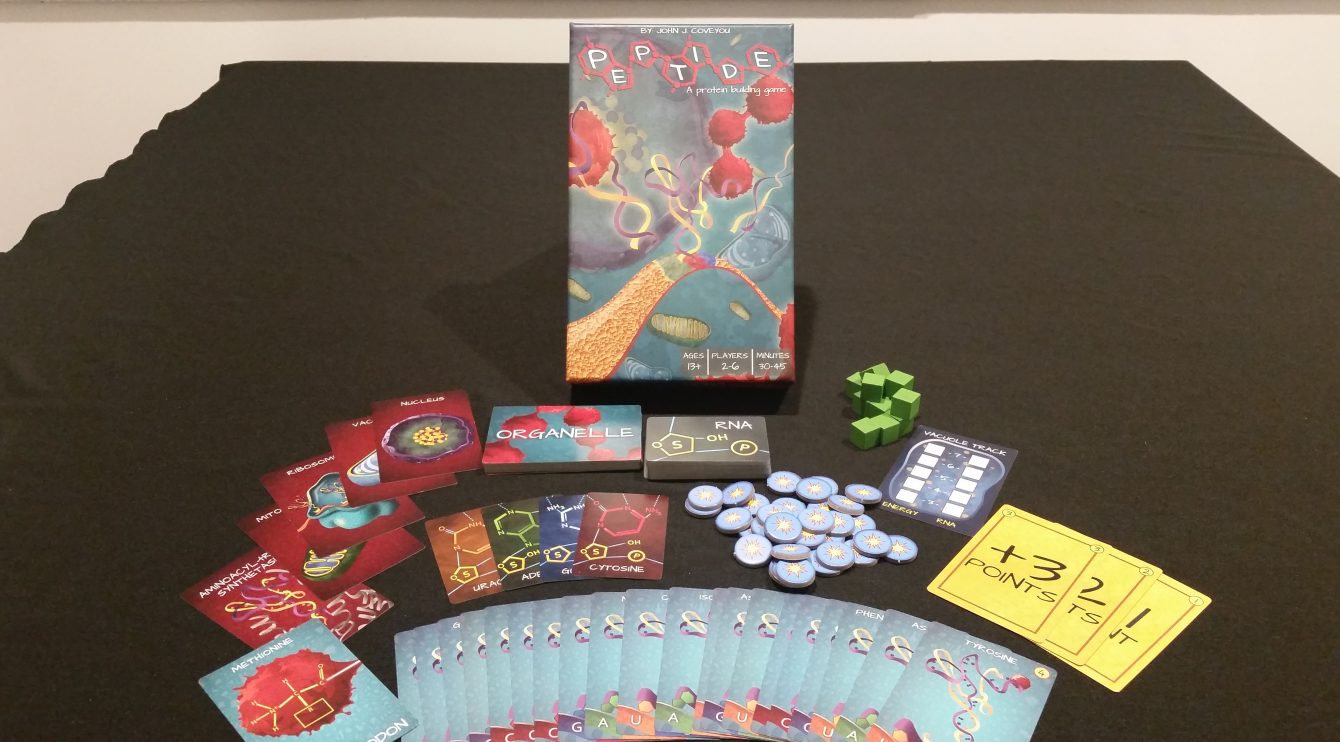 Peptide: A Protine Building Game, from John Coveyou and Genius Games, is a card drafting and set collection game all about the chemistry of RNA Translation.  Using a very straightforward series of drafting and action selection mechanics, 2-6 players will take on the challenge of building peptide chains by activating organelles, gathering requisite RNA cards, and collecting enough ATP to power the process.

Jess:  And it’s a whole lot more fun than that might sound!…I mean, unless you’re the kinda person who finds the whole RNA translation process particularly stimulating, in which case, uh, it’s precisely as fun as it might sound?

In Peptide, each player is competing to complete the most valuable chain of amino acids.  To start with, each player’s peptide chain will be empty.  As the game proceeds, players will add face up Amino Acid cards to the end of their chain.  These amino acids require specific sets of 3 RNA cards to be completed, and once completed, they need to be flipped face down to score, and to allow the peptide chain to continue to grow.

In order to do this, they will take turns claiming cards in an open draft – which is to say, all the cards on offer for the round are visible to all players, and each player claims one in turn order.  These cards, which depict organelles (the bits inside of your cells that do stuff, like your organs are the bits inside of your body that do stuff) each have a different game function when activated in the second half of the round, after the draft is complete.

The organelles (and therefore the available actions) are:

After everyone has claimed 2 organelle cards, in turn order players will activate the organelles they chose in whatever order makes the most sense.  Once that’s done, the field of organelles is reset and the process beings again.

Gameplay will continue in this way until one player draws the Stop Codon, which is buried near the bottom of the amino acid pile.  The game ends immediately and players score all of their successfully translated Amino Acid cards (the ones you’ve managed to both match and flip over).  The first players to successfully score amino acids will get some bonus points, but amino acid cards held but not scored impose a penalty.  Add it all up and the highest score wins!

Andrew:  Ok, it may be obvious, but I’m no biochemist.  however the basic concepts of Peptide don’t require a science degree to understand; gamers with no real grasp of what peptide chains are or why they matter will still be able to follow Peptide’s core mechanics.

Jess:  Which is great, because Peptide is a fun game with really great art and presentation to back it up.  But while the biochemical process it describes may be complex, the game itself is straightforward and accessible, and it may just teach you a thing or two about yourself.  Biologically speaking.  I was a little intimidated by the scientific terms at first, but honestly, it’s nothing to fret about.

Andrew:  Absolutely true.  I mean, if you need to think of the amino acids as quests, the RNA cards as adventurers needed to complete those quests, ATP as gold, and the organelles as guilds your heroes work with, you would have a perfectly functional, science-free reskin of Peptide…which would be pretty cool, actually.  But the whole point is that not only does Peptide deliver fun gameplay, but it also illuminates a bit of one of the biological processes that make life as we know it possible, and that’s awesome!  So I’ll take adenosine triphosphate over silver crowns any day!

Peptide is not precisely an educational game – it definitely is more ‘game’ than lesson – but it does give players a basic vocabulary in the RNA translation process, as well as some other basic biochemical concepts, and it definitely aligns with the designer’s mission of merging quality game design and scientific knowledge.  Its recommended starting age, 13, feels like the perfect fit for new players, but we enjoyed Peptide just fine as adult gamers, too.

Andrew:  One of the really interesting things about Peptide is that, because it’s not resources we are drafting, but rather actions, each turn has a unique layer of strategy.  There are plenty of resource-management and set collection games that make you jockey for resources, but in Peptide, you can’t always count on being able to take a specific action on a given turn, so you really need to be agile and work with whatever you can mange to draft…or stop other players from drafting…

The advanced rules for Peptide, included in the game, introduce a Vacuole track for each player.  These tracks impose limits on how many RNA cards and ATP tokens players can carry over from turn to turn.  This limit can be increased by selecting the Vacuole organelle during the draft.  It adds a challenge, to be sure, but it also slows down the game a little, and is perhaps better suited to smaller player counts.

Jess:  Actually, we think that Peptide is a great 2 or 3 player game and still solid at 4, but it threatens to slow down past that.  While the drafting phase scales perfectly, the organelle resolution phase does drag a little, since it is a solitaire process.  Waiting for one or two other players to resolve is no big deal, but if you have five players making tactical decisions between you and your next turn, well, you may get a little bored.  But we had no such issues at lower player counts, so no big deal.

Overall, we think that Peptide is a good game.  A bit heavier than a filler for sure, it has relatively simple core mechanics, ones which allow for some intriguing tactical decisions while not forcing players to be bogged down turn after turn.  And if you have any interest in biology (or have someone in your group who is in the process of studying it, perhaps), it’s even better.

(Thank you to Genius Games for providing us our copy of Peptide for review. They may have provided all the RNA, but it did not translate into influence over our opinions)

One thought on “Peptide: A Protine Building Game Review”