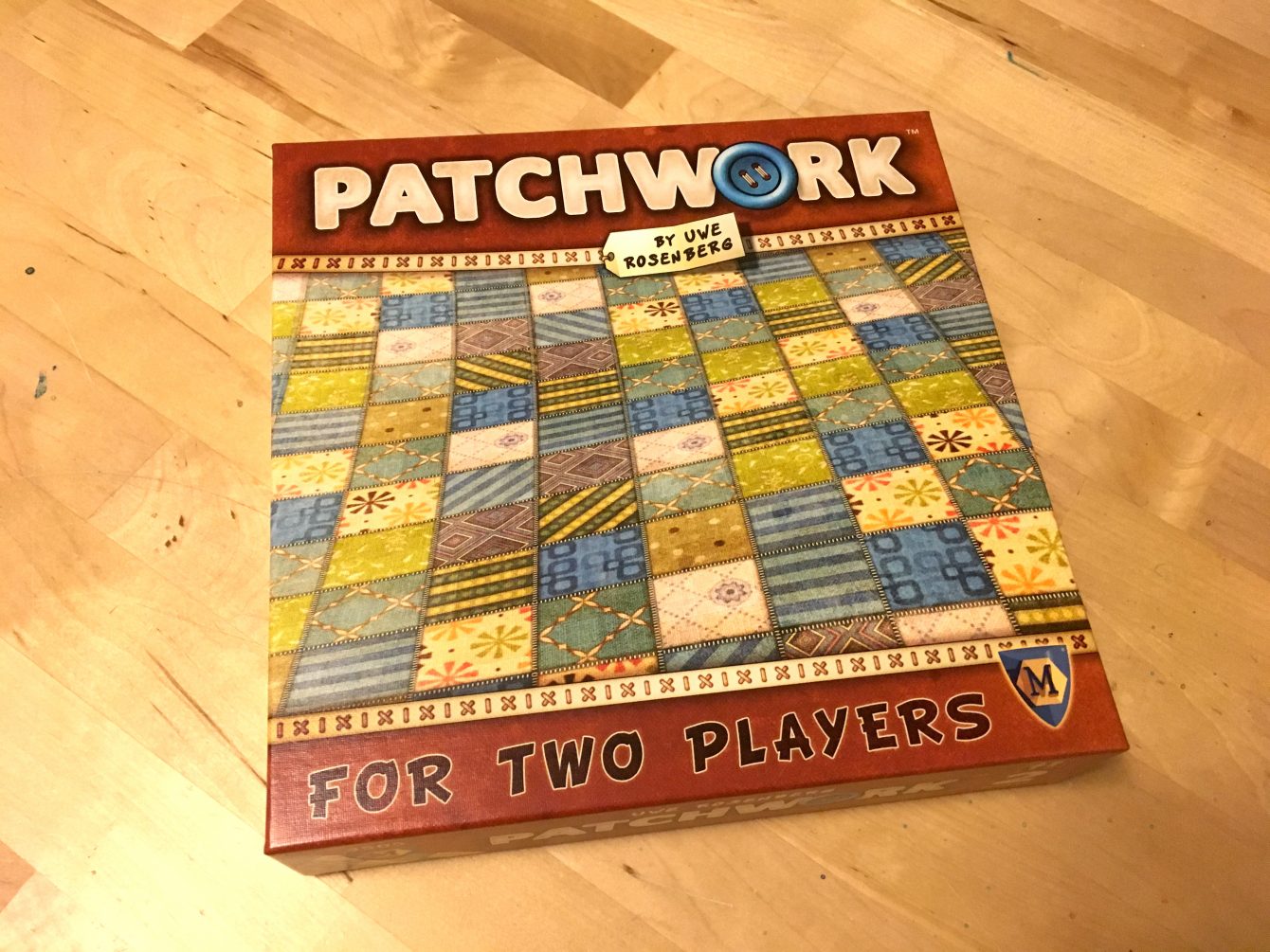 Even as a total Uwe Rosenberg fanboy, I wasn’t all that interested in checking out Patchwork. I mean he’s a great designer – one of my favorites – but a game about quilting? Meh.

Diana: But it’s a game about quilting!

Diana: How could you not like a game about quilting and buttons?

Rob: Please put down the sewing needle and give me a chance to explain!

Diana: Fine, but I’ve got my eye on you…

Point is, while the concept and theme of Patchwork didn’t seem particularly appealing at first, none of that mattered once we actually started playing it. This game is really, really fun. – quilting or no.

While I wasn’t lying when I said the whole quilting thing didn’t really appeal to me, I will admit that the idea of having two players compete against each other by constructing a quilt is indeed goofy and offbeat enough to pique my curiosity. And ultimately, that’s exactly what Patchwork is: two players vie for various pieces of fabric while trying to construct the most complete quilt possible (i.e. with few, if any, gaps).

Rob: No argument here. Granted, most of the pieces don’t qualify as tetrominoes, but fitting everything together while trying to minimize gaps definitely has a Tetris feel to it.

It really is that simple. You try to get your hands on the scraps you want, then puzzle them together to try and make something relatively solid. There’s more to it of course, which I’ll get to in a moment, but the core conceit of fitting shapes into one another is very easy to grasp.

Actually paying for those scraps of quilt is where things get a little more complicated – though not overwhelmingly so. You see, most scrap pieces have two costs: buttons and time.

You spend buttons to purchase the piece you want, then you have to move your “time token” forward on the central board a number of steps equal to the amount of time a piece requires. This means that grabbing a high-cost piece early has the trade-off of you moving way ahead on the board, and turns are handled like golf in that whoever’s behind gets to go as many times as necessary until they pull ahead. It’s a neat little idea, and it can lead to some really interesting strategies for grabbing multiple pieces one after the other or temporarily preventing your opponent from grabbing a piece they really want.

Diana: Get back to the buttons!

Rob: I am! I am! Just stop looking at me like that!

Things are even further complicated (in a good way) when you consider that the scraps with buttons on them will earn you additional buttons (i.e. income) as you pass certain points along the central board. In other words, you’re building a quilt that also serves as a sort of resource engine. A buttons-only resource engine.

The dynamic that all of these elements work together to create is actually kinda incredible. Sure, buying a really nice scrap and moving several spaces ahead might open the door for your opponent to gain the upper hand, but playing it safe and buying several low-cost scraps in a row when you’re behind might empty out your button reserves prematurely and leave you in the lurch when you finally have the opportunity to buy a piece you’ve been eyeballing for several turns.

Diana: Hehe, “button reserves.” That’s one of the things I really appreciate about this game: it’s just fun to talk about buttons as currency, and make button-based puns.

Rob: I suppose it is pretty cute.

I can’t emphasize enough just how surprised I was to find myself enjoying Patchwork as much as I have. I mean yes, it’s Uwe Rosenberg and I should never have doubted him, but it’s also a game about quilts. The thing is, it’s an incredibly well-designed (and tightly designed) game about quilts that’s a ton of fun to play.

It’s so simple but at the same time there’s an opportunity for an awful lot of strategy with every move you make. And for a 2-player game, it really does strike a great balance, being just heavy enough to keep both players engaged while not being nearly so heavy that it feels dense or unwieldy – great date-night gaming fodder.

You should absolutely give it a try!