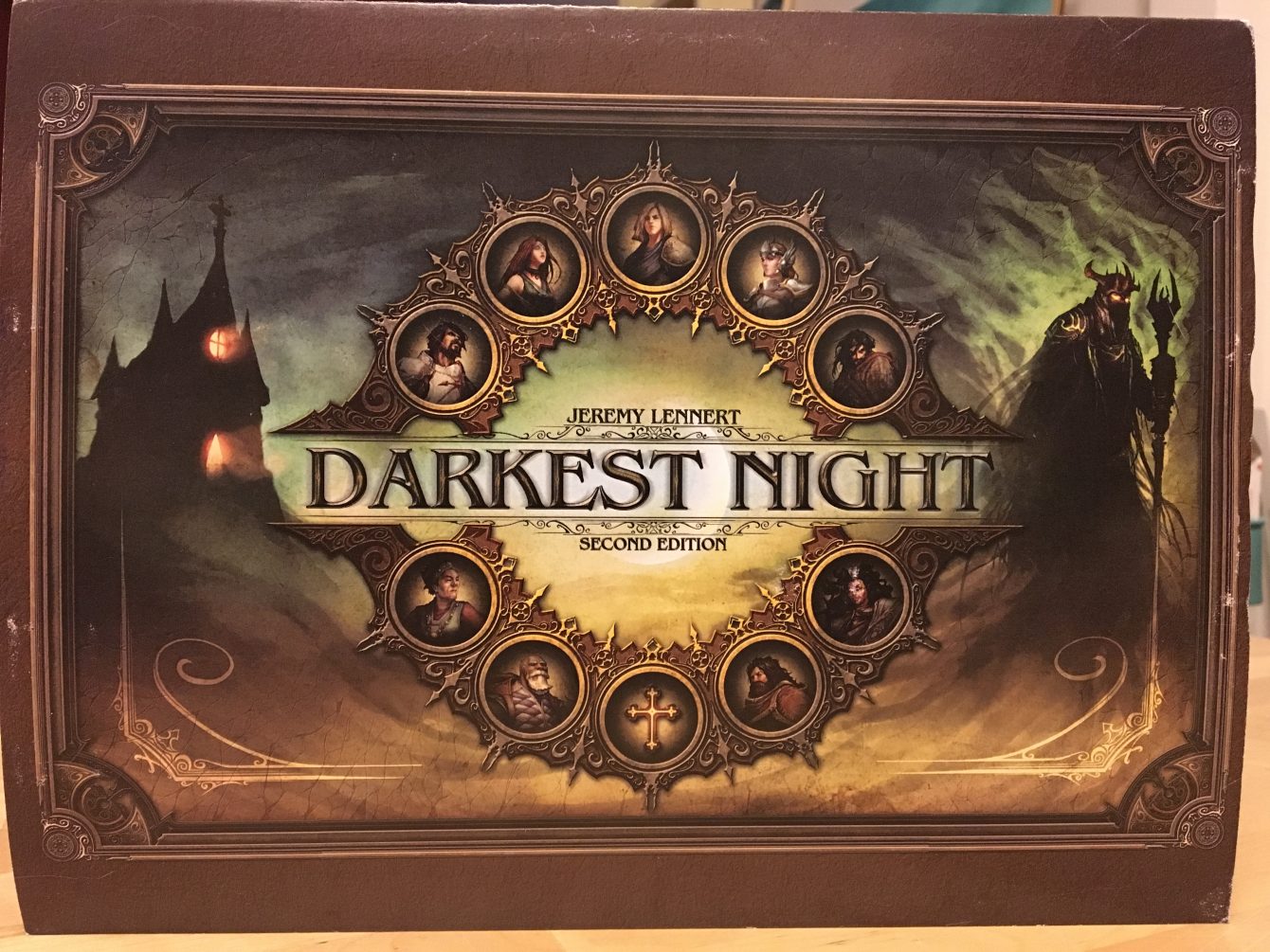 Okay they’re not releasing it yet, but they are starting a Kickstarter campaign for a second edition soon. But it’s not just a re-printing; the Kickstarter goal is to include lots of new stuff, improved stuff, and pretty much everything that you can find in all of the Darkest Night stuff that’s been released so far.  And thanks to Victory Point Games, we were able to get some hands-on time with a pre-production copy!

(So, obviously, Kickstarter prototype advisory – everything here is prototype, and not necessarily indicative of the final look of the game)

There are a lot of things worth mentioning in the behemoth of a Second Edition box we received – the most immediately noticeable of which is the sheer volume of content that’s inside of it. Map cards, quest cards, artifact cards, mystery cards, darkness cards, event cards, SO MANY hero ability cards, blight tokens, item tokens, status tokens, tracker tokens, hero tokens, and dice that it was actually pretty intimidating – getting everything sorted out took almost an hour – but who knows, maybe the final copy will be a little better organized for out-of-the-box play.

The second noticeable thing is that the components look quite a bit different than what you’ll find in the first edition, and are pretty much all upgraded somehow. Blight tokens are easier to decipher and are color-coded to make sorting and finding what you need easier. Hero ability cards sport new artwork on the backs and are also (mercifully) easier to sort at a glance. Map and event cards are larger than everything else, which helps them to stand out and makes reading all the info that’s crammed on them much easier.

The overall card stock feels a bit thicker and finely cut as well, though, again, I’m not entirely sure if it’s indicative of what will be in the final print. The game board is also sporting some improved and more detailed artwork, though it came as two folded sheets rather than a regular foldable board – which probably won’t be the case in the final release. Darkest Night was never a bad-looking game, but I think it’s safe to say that it’s going to look better than ever.

Initial impressions of actually playing the Second Edition is that there are a lot of interesting elements that can really mix things up. Quests are back, and add cool (if sometimes brutal) things to do that aren’t just dealing with blights. Mysteries create additional tasks you can complete, and are used in place of keys when it comes to finding the Holy Relics needed to banish the Necromancer – assuming you decide to play with them, of course; modules can be added or removed to customize the feel of the game for your taste.

Map cards have also been tweaked so that you can organize them into “subdecks,” which basically amounts to yet another decision about how delightfully difficult you want to make things on yourself.

Rob:  Or you could accidentally shuffle all the map cards together (like we did at first) and create a huge deck of awfulness that completely torpedoes your chances from the get go, but I wouldn’t recommend it.

And there are, to use a technical board game reviewer term, a metric buttload of heroes you can play as; each with unique skills and abilities that can give them an edge in combat, aid other heroes, help with searching, and so on. There’s also a deck of darkness cards which can be used to randomize the Necromancer’s special powers that kick in as the darkness track increases, which did keep us on our toes a bit but you’ll need to do things the hard way if you want to see more than a couple of these cards at a time.

However, the biggest addition – from a gameplay standpoint, I mean – has got to be Sparks. Sparks can be earned by completing events, triggering certain powers, and so on, and they’re… well they’re not exactly a game-changer, but they give heroes just a little bit more of a edge. Each Spark a hero uses (they can save up a maximum of three, and they don’t count as items) will allow them to roll one additional die during a single roll, which doesn’t sound like much but I think most Darkest Night players will agree is kind of a big deal.

Finally, the Second Edition also includes a special set of optional rules meant for a two-player only experience – the first edition of Darkest Night always required 4 heroes in play, no matter how many players were there to control them.

These rules are a little fiddly when it comes to tracking the use of tactics and action abilities, but they definitely make things interesting. The basic gist is that each player is controlling a more powerful hero with a main and sub-class, as well as a larger pool of abilities that draws from both class choices. Each hero also gets two turns/actions per round as opposed to the usual one.

Diana:  I wasn’t sure how much of a difference any of this would make at first, but a few minutes later I was pretty much sold. Being able to focus on a single hero makes it much easier to care about how well or poorly they’re doing. Similarly, taking two actions instead of one creates a much bigger sense of accomplishment – especially when you can move and perform an action at the new location during the same round. Thumbs-up for the two-player mode, basically!

What all of this amounts to is basically the definitive version of Darkest Night to own. It’s packed with content and optional goodies, it’s prettier, and it marks an overall refinement in a game that I honestly didn’t know needed any refining until now.

We are super excited to get our hands on this newest edition of Darkest Night, and we recommend you check out the Kickstarter right here to snag your own copy!

(Thanks to Victory Point Games for providing us our copy of Darkest Night Second Edition for preview.  Their generosity didn’t influence our opinions, nor did it make dealing with that jerk of a Necromancer any easier.)