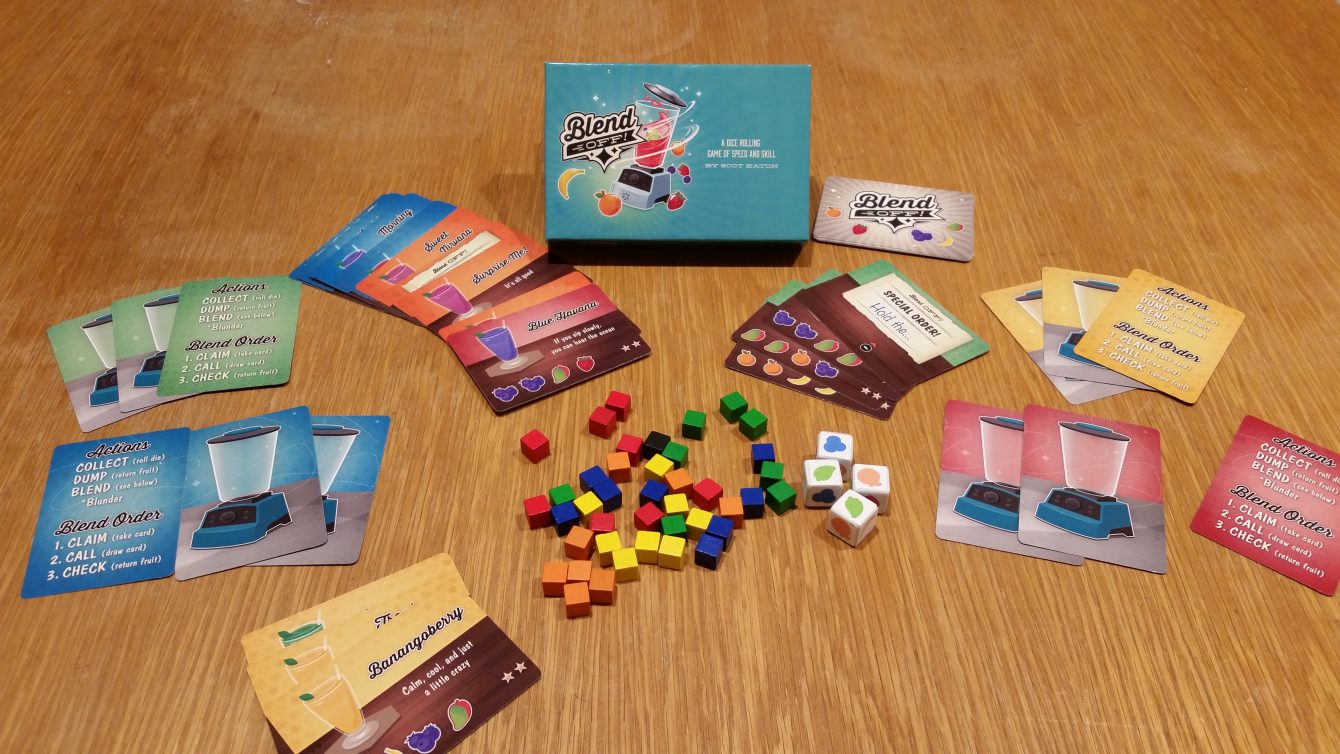 Blend Off! from Thunderworks Games and Scott Eaton, is a fast-paced dice-chucking set collection speed game up on Kickstarter right now!  In it, 2-4 players will do their darnedest to be the best master mixers, blending up smoothies as fast as possible for the evening rush of orders.

Each smoothie on order requires either 4 or 5 pieces of fruit to be blended together, and each player has two blenders so that they can work on multiple orders simultaneously. Order cards show precisely what ingredients need to be blended together to score them, as well as how many star points they are worth at the end of the game.  Some special order cards will add ingredients to existing drinks to increase their value, or omit ingredients, making those drinks easier to make.

There are no turns in Blend Off!; instead, players will rush to fill orders as fast as possible, with the best master mixer taking home the coveted prize of free smoothies for a month!*

(Kickstarter Prototype Warning!  None of these bits are necessarily reflective of the final version of the game!  Y’all have been warned!)

*Month’s supply of free smoothies not included, which is NONSENSE.

Jess:  That sounds fun!  Tossing fruit in the blender, slamming down drink orders, making people happy!  Of course there is the stress of trying to do it best and fast, but what could be difficult about it?

See, Kevin is a bit of a nervous guy.  His job is pretty simple; grab the fruit that the mixers need and run it to them.  But all the pressure of the sudden influx of customers seems to have Kevin in a bit of a tizz.  So instead of a steady stream of perfectly picked fruit, mixers are left to scramble, hoping Kevin gets is stuff together fast enough to get them what they need before their opponents manage to do it first.

Jess:  And avoiding the durian fruit.  Damn it Kevin, why the durian???

The goal of the game is simply to blend through the deck of order cards (which grows or shrinks with the player count), and the person who manages to blend the highest value of smoothies (not necessarily the most) is the winner!

Andrew: Blend Off! is a simple game – roll the dice like mad, hoping to get the sets of fruit you need faster than your opponents can do the same.  But it’s a really fun, frantic good time.  At two players it’s a good filler, providing five minutes of entertainment at a time.  But at 4 players it’s madness, with players swiping fruit and snatching orders out from under each other.  It’s awesome!

Jess:  Heck yeah!  The other cool thing is that it comes with a bunch of variant rules, including turn-based gameplay or alternate ways of distributing order cards and Jr. variants for playing with little kids.  The only thing in the box we didn’t like was the ‘Spill’ card that forces everyone to dump out their mixers – it’s a jerky card.  But honestly, Blend Off! is so fast and frantic that even that wouldn’t ruin the game.

The Blend Off! Kickstarter promises to bring nice fruit bits and custom dice (instead of the prototype Kevins we got, with stickers that make me sad).  Since the fruit bits will be uniquely shaped, the game should be very colorblind friendly, which is awesome.

At $19, we think that Blend Off! is exactly the kind of fast, light, giggle-inducing filler game that will work great for kids and adults alike, and as a great cool-down between heavier games.  It’s got board game night written all over it, for sure!

We hope you head on over to the Blend Off! Kickstarter and check it out!

(Thanks to Thunderworks Games for providing us our prototype of Blend Off! at our request.  We asked for it because it looked neat, and hey, we were right!)