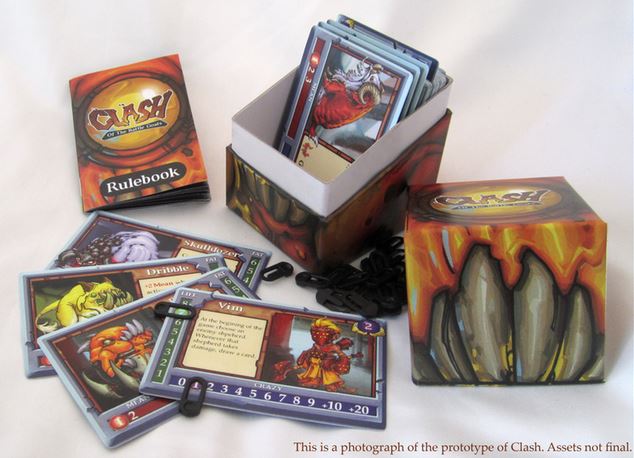 Brent Critchfield is at it again!  Last time we reviewed a game from Studio Woe, we got Gruff, a head-to-head card battler featuring mutated necromantic cyborg fairygoats battling it out (and yes, it is exactly as awesome as it sounds).  This time, Brent brings us Clash of the Battle Goats, a stand-alone 2-player only version of Gruff, complete with new Shepherds of Woe, new Gruffs, and some new rules that add to the winning Gruff formula.  It’s up on Kickstarter RIGHT NOW!, is weeeeell past funded, and has only 5 days to go!

(Prototype Alert! – Don’t get gruff with us about the images – this is a prototype, and we are certain that the final components will be as high quality and downright awesome as the original Gruff was)

Clash of the Battle Goats is a specially packaged 2-player only version of Gruff.  As such, if you know Gruff, you know Clash (and if you don’t know Gruff, here’s a link to our award-winning review – go ahead, I’ll wait…All caught up?  Good!).  The core mechanics are the same, as is the concept and design.  The art is still fantastic, and the components, such as the clips and box, are awesome.  Everything we expect from Studio Woe.

At the core of Clash (and Gruff before it) are these monstrosities – the battle goats which fight for the Shepherds of Woe.  Our Clash prototype came with 6 all-new Gruffs.  Like those found in the original game, each Gruff’s abilities are represented by a deck of cards as well as text on the Gruff’s themselves.  Interestingly, these new Gruffs are not less mechanically complex than those in the original – even though this is an ‘introductory’ version of the game, Studio Woe didn’t water-down the Gruffs they included.

On the contrary, some of these Gruffs have really unique attributes, like Lockjaw here, who gets Fat and Mean in a serious way, but contributes no Weird at all, forcing you to strategize around its particular strengths and weaknesses.  There are also a ton of opportunities to build synergies between Gruffs, so each combination of three plays out very differently.

The Shepherds of Woe

We got to take 2 brand-new Shepherds for a spin in Clash, and we love them.  North features several Thresholds – points on her Life meter that, when passed, will let her draw cards.  It’s an excellent kicker for when you’re getting knocked around a bit.  Vim capitalizes on other Shepherds’ suffering, letting him cycle cards whenever one takes damage.

Another new feature to these Shepherds is the Breaking Point number in the upper right corner of the card.  This number is the limit of Ultimate cards which can be included in that Shepherd’s deck.  However, rather than this being a limiter on the deck’s power, I think of it more as a license for Studio Woe to keep coming up with huge Ultimate powers for their Gruffs, since limiting the number of them in a deck acts as a balancer for their power.

Because of how successful the Clash Kickstarter has been, Studio Woe will be adding a ton of extra stuff to Clash.  This includes updates of original Shepherds as well as new, Legendary Gruffs, the powers of which I cannot even begin to fathom!

Andrew:  So Clash is really a gateway game into the world of competitive goat battling.  What’s not in the box is as important as what’s in it, letting new players get into the guts of the awesome, downright fun world of Gruff all at once.  And for veteran Shepherds, Clash brings all new and exciting  content, all of which can merge seamlessly with the original game.

Jess:  So it’s a standalone game and an expansion pack!  Awesome!

The Kickstarter is also a great opportunity to snag Gruff, as well as some of the gorgeous playmats that make setting up the game all that much more epic.  We were fans of the original, so grabbing ourselves a copy of Clash of the Battle Goats is a no-brainer.  But since this is an excellent place to start, if you’ve never tried your hand at monster goat combat, we recommend Clash for newcomers and veterans alike!

Now, time is running out to get over to the Clash Of The Battle Goats Kickstarter, so we suggest you get yourself over there and grab yourself some Battle Goat action!

(Thanks to Studio Woe for providing us our prototype copy of Clash of the Battle Goats for review. Their awesomeness didn’t influence our preview one bit.)