Morning Players, the company behind Kumo Hogosha,  is reviving their dreams with HOPE, a pre-apocalyptic race to save the universe. The game was previously promoted on Kickstarter, but after realizing they wanted to improve the visuals and rework some mechanics, the campaign was pulled before it could fund. Morning Players has been working all year to perfect their product and coming this June, they will be relaunching the Kickstarter. 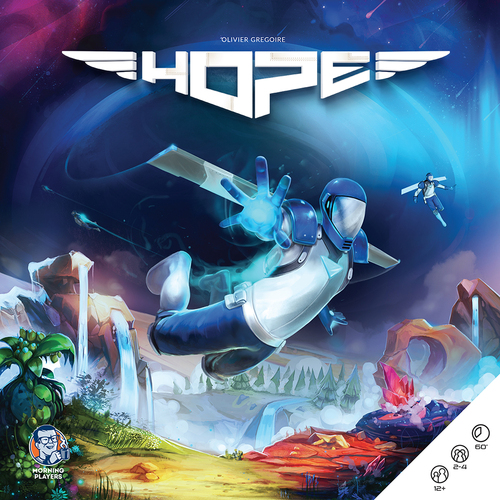 HOPE’s story begins with the oncoming collapse of the universe. Oh dear! Earth has created the H.O.P.E. (Human Organization to Preserve Existence) project in order to try to save humanity. If they can manage to restore life to the universe it will stabilize and avert catastrophe. Players will try to enact H.O.P.E, but there is one major problem: there is a traitor in their midst! A member of the faction N.O.P.E (Nefarious Organization to Pulverize Existence) is trying to ensure the natural course of the universe and will do anything it takes to make sure you fail.

Using tiles players create a 3D illusion map of the universe and will begin terraforming planets. If they manage to terraform all the planets, the universe is safe and they win! Since the first iteration of the game Morning Players has added a few things to make it more robust, such as: the traitor mechanic, redesigned spaceships figurines, pioneers and monoliths by Nassos Appolonatos, improved illustrations by Brazilian artist Marcelo Bastos, and they have reworked the quality and the readability of the game itself.

Jess: I’m looking forward to seeing how the game looks come this summer. The art for it already looks awesome and i think the ship minis are pretty slick.