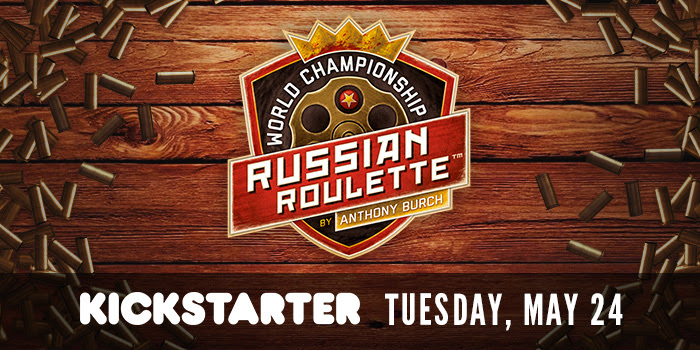 Anthony Burch, actor and writer, known for Hey Ash, Whatcha Playin’? (which we are HUGE fans of), is kickstarting his new game World Championship Russian Roulette (WCRR) next week!

In WCRR you have lucked your way through so many games of Russian Roulette, that you have made it all the way to the world championships! You will captain a team of of eager rouletters (is that a word?) in this press your luck, bluffing game for 2-6 players.

Unlike most games of Russian roulette, you don’t have to be the last man standing to win. Each team will compete for points by bidding on how many times you can pull the trigger before you turn your brains into a horrifying smoothie. Whoever gets 15 points first wins! That said, you can also just go the traditional route and outlast your opponents.

Each time a teammate bites the big one, you get an action card which allow you to do things like: peek at the top three cards of your gun deck before bidding, change a bid, or even shoot another player.

Jess: The game also has an interesting cheating rule. At the beginning of each round, you will place one of your gun cards in your pocket. You can cheat by adding your bullet card to your pocket, but if you get caught there is an ultimate price to pay.

World Championship Russian Roulette will be produced by Tuesday Knight Games, makers of Two Rooms and A boom and WOO-WEE! It’s Kickstarting May 24th so get your rouletting pistols ready!