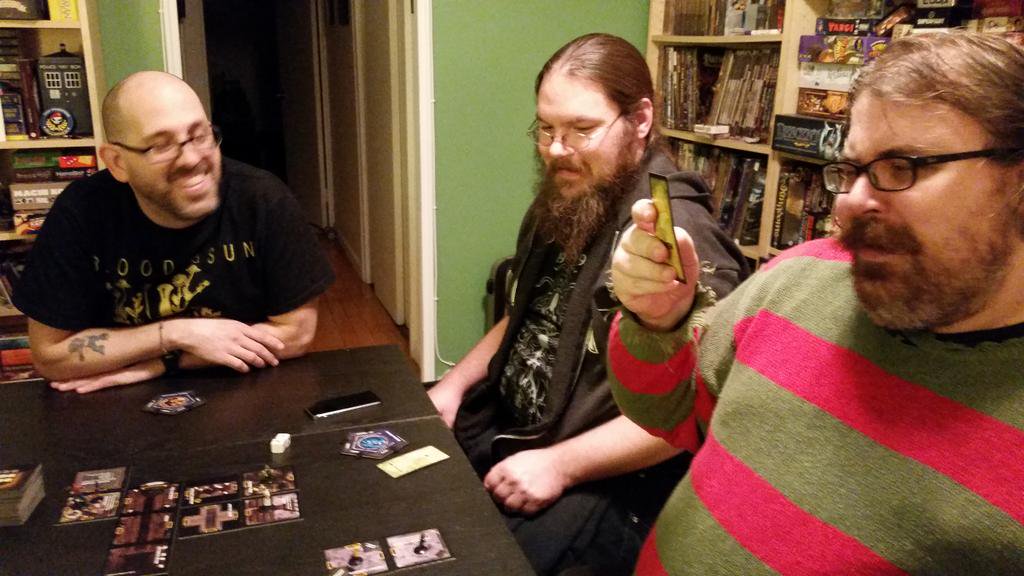 Hi!  I’m Andrew!  If you read Gameosity, you probably recognize me (or at least my little writer icon) from when I pipe in during our reviews (usually to inject something incredibly witty or whatever.  It’s no big deal).  Normally, I’d be here to tell you about some awesome new game or to help Jess deliver the news or whatnot.  But today, I have something different in mind.  I want to introduce Blogosity!

Blogosity is going to be our ‘show-within-a-show’ series of articles.  Predominantly, it will be my meandering thoughts on gaming (though I expect the others will certainly chime in…I’ve yet to figure out how to stop them), be it board games, tabletop roleplaying, video games or, well, whatever crosses my geeky little mind.

And for this first issue, I was inspired by two games I got to play this past weekend, The Grizzled from Cool Mini Or Not and Death Angel from Fantasy Flight Games – games which made me reflect on why I got so damn into boardgaming as a hobby.  And that got me thinking that maybe it would be a good start for this dialogue I want to have with you all.

So without further ado, let’s the Blogosity begin!

I game because I love people.

That wasn’t always the case (the loving people part, I mean.  Gam3r-4-lyfe, amirite?).  A lifetime of playing video games both fueled and was fueled by my relatively introverted nature as a young kid and teen (surprise surprise, I know), and I certainly took a huge amount of pleasure in the solitary nature of my favorite video games – I was fortunate enough to grow up in the golden age of the SNES JRPG boom, so games like Chrono Trigger, Final Fantasy 6, Breath of Fire, and the much-adored Earthbound consumed an inordinate amount of my teenage thoughts.

However, as I got older, my tastes changed.  No, not changed – I didn’t stop loving well-crafted video games, particularly RPGs.  But they broadened – college saw me meet my first tabletop roleplaying group and (after a rocky start, a story for another day, perhaps), the enthusiasm I had always held for video games suddenly found another avenue of expression.  I plowed hours, hundred of them, into systems like D&D 3.5, GURPS, Traveler, and Marvel SAGA, relishing the shared storytelling experience of roleplaying and getting from it a thrill that no video game had ever really given me.

See, I may describe myself as an introverted young teen, but to meet me now, the happily married 33-year-old who treats his living room more like a hotel than a fortress of solitude, ‘introvert’ might not immediately spring to mind.  I’m gregarious, loving the crowd of friends who I am fortunate enough to be perpetually surrounded by.  I’m loud and I take up space and I just love having people around.  And in those years at school, when I would run marathon 6-day sessions (no exaggeration) of Vampire: The Masquerade or we would slip into character during dinner to discuss what was happening that week at the Xavier Institute, I was coming to realize that it was the people I was connecting to which made the stories and the games come to life. 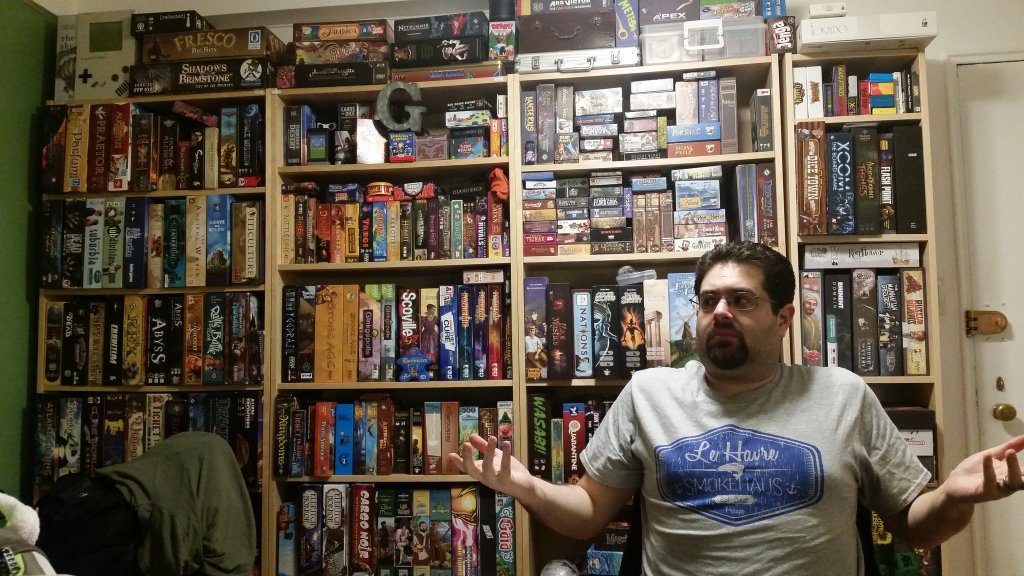 This happened because of co-op games.

When we started Gameosity, we wanted our first review to to be a game we all loved, a game the four of us played together often.  Elder Sign was the natural fit – not only is it a game all four of the Gameosity founders really enjoy, but, as a cooperative game, it really embodied my favorite aspect of boardgaming – playing together.

I’ve invested so much into board games for lots of reasons (obsessive personality besides), but the main reason this hobby has supplanted video games to such a degree for me is that it gets people facing each other.  Laughing together, playing together, gritting our teeth as Josh places his last meeple in the EXACT SPACE I NEEDED – these are the moments that make board games special for me.  And cooperative games tend to accentuate them.

The first modern hobby board games I played was Arkham Horror (a deep one, as gateway games go…that wasn’t a Lovecraft pun, I swear).  Somehow occupying a space between casual games and the tabletop RPGs I loved so much, the shared narrative of Fantasy Flight’s magnum opus, that of us against the elder gods, was something I could really get excited about.  Games like Risk or, ugh, Monopoly never really engaged me because they felt, I don’t know…petty?  All about knocking each other down, punch by punch.  Just not my thing.  But working together against a downright unfair enemy?  Yes, please!

Of course, I don’t really mind contention in my games.  I’m not the most competitive person I know, certainly, but I love winning and I don’t love losing, so there’s that.  And I can definitely appreciate a tight, brutally competitive game – some of my favorite losses have been against clever plays or last-second twists of fate that elevated my opponent above me.  And hell, if I couldn’t have a great time losing games to my wife, I simply couldn’t play with her.

Which brings me back to this weekend, when I played The Grizzled and Death Angel – games with a surprising number of similarities.  Both games are about a group of brothers-in-arms, both are 100% cooperative, both come in small boxes and provide a large amount of entertainment.  Where they differ, the ‘feel’ of the games, makes them as different as night and day.

Death Angel is about a squad of Space Marines – Omega-Bros in power armor who scream about how much they love their Emperor while swinging around their swords which are also chainsaws, facing down limitless waves of alien monstrosities as they fight their way to the core of a massive spaceship.  Its lore is among the most ludicrous, over-the-top sci-fi ever written, and Death Angel is a game of frantic (yet ultimately tactical) violence and glorified death (the foes you face, your own, everyone’s!)  It is a meat-grinder of a game, and you and your fellow space marines can only hope to die with honor, and maybe, just maybe, make it to the game’s mission-based objective.

Playing it is an experience in near-victories as the genestealers maul your troops to death and joyful destruction each time you manage to annihilate a horde of the baddies.  Gameplay-wise, it encourages group coordination and smart tactical maneuvers – without your battle-brothers, you will lose.  Grim, difficult, and delightfully bombastic, Death Angel is a fantastic little game that beats us waaay more frequently than we beat it.

Gameplay-wise, The Grizzled is little more than a hand-management game, mostly about emptying your hand of cards as quickly and efficiently as possible.  But the simplicity of the mechanics belie an atmosphere of tension and stress, where each card play can potentially tank the current round, which only adds more trauma to be experienced and brings defeat ever-closer.

It’s not a game about heroes – these trials aren’t about killing enemies or carrying out strategic missions.  Instead, The Grizzled is all about the wear and tear on the morale and mentality of its soldiers – normal people who just want to go home, and who find the scream of the combat whistle or the chill of winter to be as terrifying as any genestealer ever was.  Add to that the very real tragedy that befell the game’s artist (killed in the Charlie Habo terrorist attacks) and what you have is a very rough game, both in theme, mechanics, and history; a game that will bring your group together, either in shared triumph or, much more likely, shared trauma.

I was lucky enough to play both these games with good friends of mine.  And during all the tense moments of tactical analysis or card selection, in the times when an unbeatable column of genestealers flanked my squadmate’s characters and I threw myself into the fray to buy her a moment to get clear, when the last shell fell and we were all still alive, those were the kind of moments that make cooperative gaming so damn sweet to me.

We laughed, we cried, we killed some monsters.  And we did it together.

Of course, co-op play can have its drawbacks.  Some folks just don’t play well with others – the quarterbacking phenomenon, where one player dictates to the rest what they should do.  The gloryhound, the attention-hog.  And some people just don’t like co-op, unsatisfied if they can’t face down another player (or, perhaps unhappy relying on others to win).  And I get all that.

However, with the right group, for my money, these games accentuate the best part of board games – coming together with good people, face to face, and sharing an experience that makes you instant allies.  It goes a long way to making you friends, too.

But what do I know?  What are your thoughts on cooperative games?  Do you have any favorites?  Any you hate?  What was your best/worst/most flavorful co-op experience?  Tell me all that and anything else in the comments below!

So that’s it for issue 1 of Blogosity!  Thanks for wandering through with me, and I hope you’ll come back for more.  If you have any thoughts on the things I’ve shared or the format, please don’t hesitate to contact me so I can make improvements, and the comments section is always open!

See you next game!