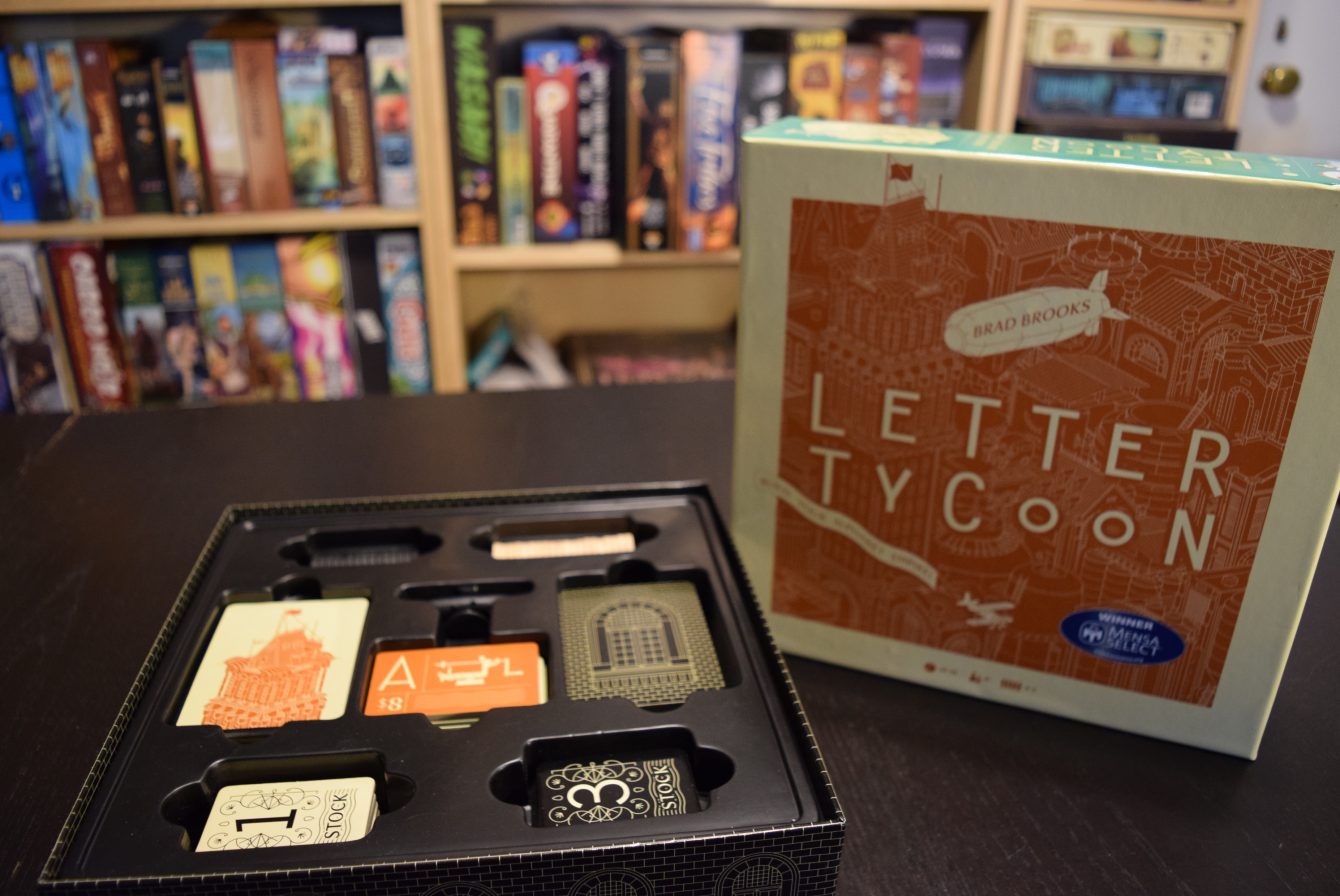 I don’t know what it is about ‘spelling’ games that turn me off so much.  I couldn’t tell you why, but games like Scrabble just sorta set me on edge – there is this constant sense that I am not going to be able to come up with a decent word, and I shrivel beneath the group’s scrutiny.  I don’t know, maybe language just isn’t my thing.

Andrew:  Uh, right.  Let’s not dwell on that too much.

However, Letter Tycoon, from Breaking Games & Squirmy Beast, is one of the very few spelling games I sincerely do enjoy.  By combining the spelling component with a simple market economy game, designer Brad Brooks has created a relatively quick-playing game that makes you care about what your opponents are spelling as much as your own words.

What makes Letter Tycoon interesting, though, is what you can do with your capital once you’ve spelled your way into some money.

Each turn, after spelling a word, you have the chance to purchase the Letter Patent on one of the letters you used that turn.  Once you own the patent on a letter, each time another player uses it to spell a word, you will collect some cash from the bank.

Andrew:  So, this is where things get really neat.  Common letters, like most vowels or the ever-loving ‘S’ cost quite a bit more than less-common letters.  But in exchange for your investment, you stand to make points on other players’ turns almost constantly.

Jess:  And what I like most about it is that the money you make comes from the bank, not the other players.  So its not going to break one player’s chances if they just happen to use a handful of letters another player owns.

Additionally, some of the letter patents will give you persistent abilities for the rest of the game.  For example, once you own the J, any time your word is at least half vowels, it earns you double the cash.  This further adds value to those letters that might not be used as frequently.

Everything in Letter Tycoon that you can collect, cash, stocks (VPs), and patents, all translate to victory points.  And as soon as one player hits a certain value of patents (determined by player count), the game ends and whomever has amassed the greatest fortune wins!

Jess:  The production quality and aesthetic of Letter Tycoon is *fantastic*.  Nice heavy Stock tokens, painted wooden coins, and some absolutely excellent artwork on the cards give the game a great table presence.

Andrew:  And the gameplay really is incredibly accessible.  There are precious few spelling games I enjoy (Paperback by Tim Fowers is probably my favorite), but Letter Tycoon immediately rockets toward the top of that list.

The only downside of note (aside from the fact that it’s a spelling game and that may not be your cup of tea) is that, between turns, there is very little for you to do aside from try to plan your next word.  However, since letters in the common pool are discarded when someone uses them, the only letters you can truly rely on having when your turn starts are the 7 in your hand.  Otherwise, you do kinda spend a good bit of time waiting for your fellow players to compose their words.  It’s not terrible, but if you’ve got someone in your group who tends to drag on their turn, well, there isn’t much you can do.

We absolutely recommend Letter Tycoon.  In a genre that won’t appeal to everyone, it manages to be light and accessible, while still throwing in just enough tactics and strategic options to keep everyone engaged.  The production value is high, the gameplay is fun, and it’s a solid experience for gamers of any stripe.

(Thanks to Breaking Games for getting us our review copy of Letter Tycoon.  Their generosity didn’t influence our opinions)