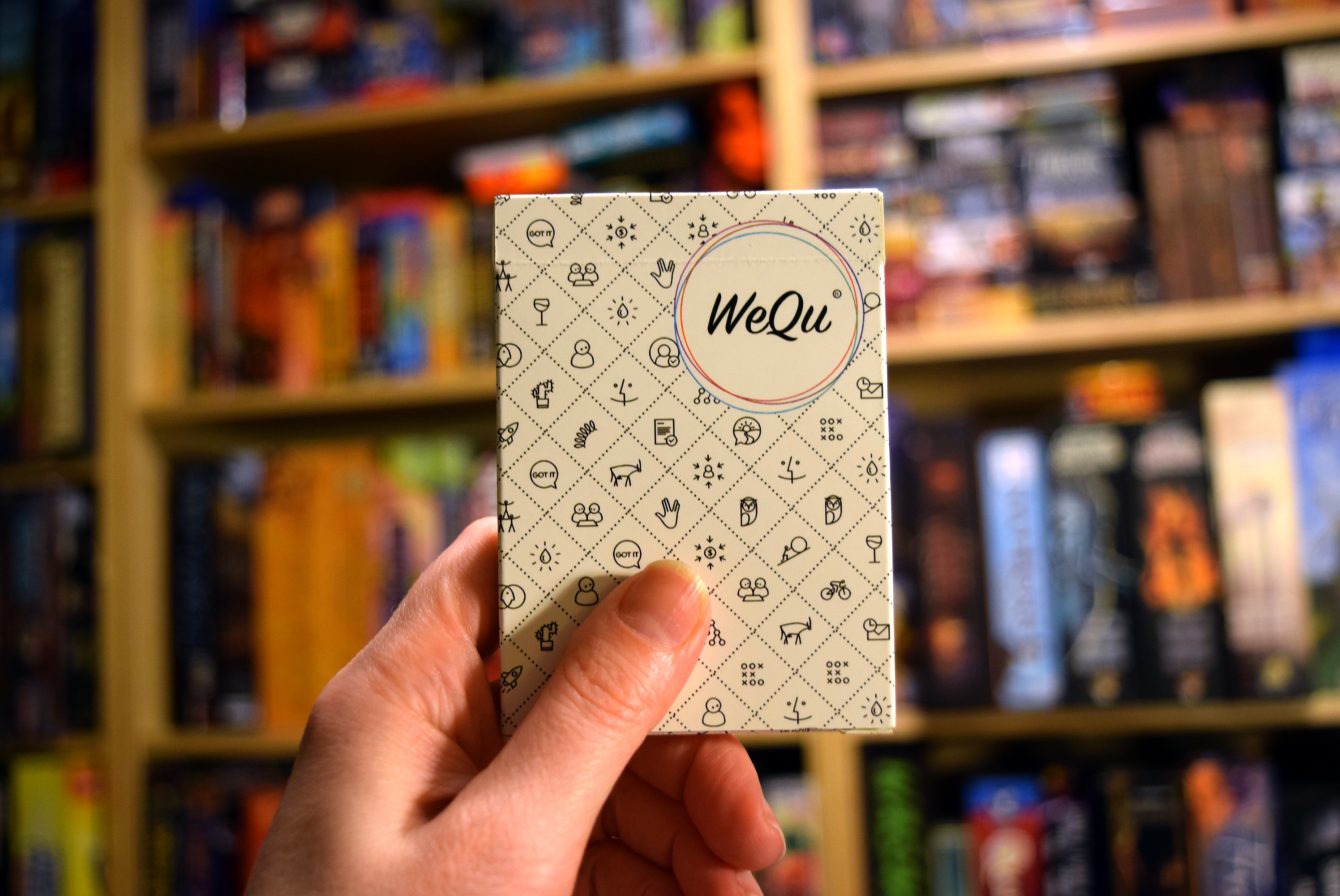 WeQu, created by Oh Kwon, Ted Munter and Hari Sreenevaslu, is described as “a new, revolutionary and interactive card game and app designed to bring friends, family, coworkers, and acquaintances closer together through positive communication”.

“WeQu prompts players to learn more about each other through intriguing discussion that can break the ice on the most tense and awkward of conversations,” said Oh Kwon, Co-Founder and Owner of WeQu. “As someone who emigrated from another country to the Netherlands, I know the struggles that come with language, social, and custom barriers. WeQu helps individuals focus on what really matters when it comes to conversing.”

The game is on Kickstarter right now and Andrew and I got a chance to check out a preview copy, sent to us by the designers.

(That said – Kickstarter Prototype Alert!!! – None of these components are necessarily final!) 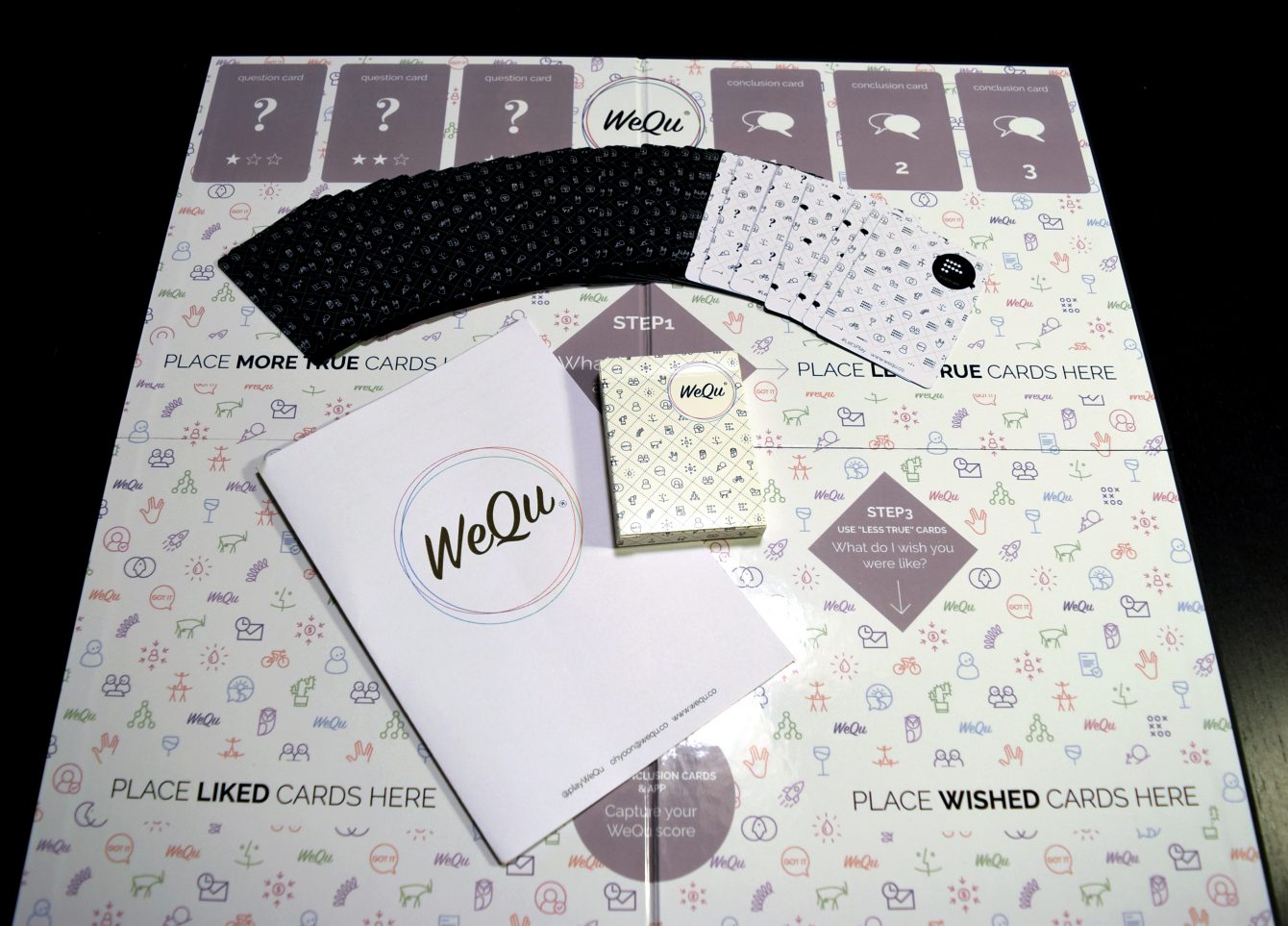 Jess: We’ve known each other for over 15 years. I wonder what we could possible learn about each other?

Andrew: Let’s play and find out!

WeQu uses a very simple set of cards to spark conversations. You get 3 question cards, a handful of characteristics, and conclusion cards. For people who are not familiar to one another, you play a modified version of the game that only uses 1 question card.

The game also comes with a board. It shows you how to arrange the cards as you play,  but, honestly, I found it largely unnecessary. If you plan to take the game along with you to a meeting or date, then the pack of cards fits neatly in a pocket and is all you really need to play. 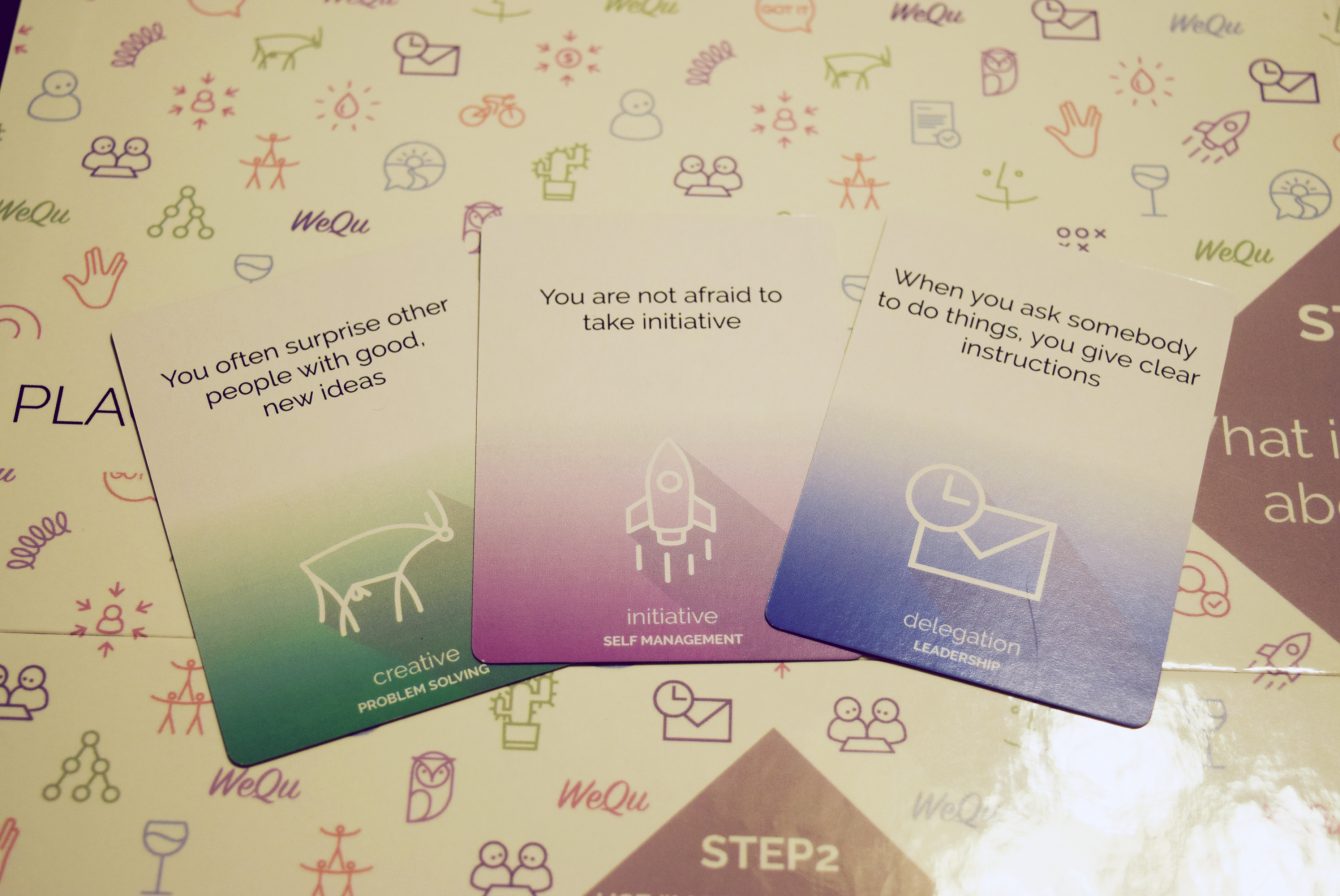 To play WeQu, one player will draw two characteristic cards and choose which of the two cards best describes the other player. These characteristics are 32 essential qualities based on the philosophy of Aristotle’s 11 virtues. The cards include things like emotional intelligence, self management, communication, problem solving, and leadership. According to the Kickstarter, players can take turns drawing cards for each other. In the version we played, player 1 continues drawing cards and choosing between them to form piles until the deck is empty. As you select cards, you are encouraged to give reasons why you chose or discarded cards.

Jess: When I first looked at this game, I thought it wasn’t going to be very effective. I mean, if you don’t know a person at all and you try to play the game, you cannot make these decisions based on anything but a shallow estimation. As we played though, Andrew pointed out an important fact: It did start conversations.

Andrew: While Jess and I know each other very well and the cards we chose for each other were not really surprising, they did get us talking and that it the point of the game; to open channels of communication. In that way it succeeds.

The game can be continued with the 2 other question cards, which further divide the piles into traits you like about the other person and traits you wish they would work on. You can also use the conclusion cards to select a few traits to celebrate or work on. 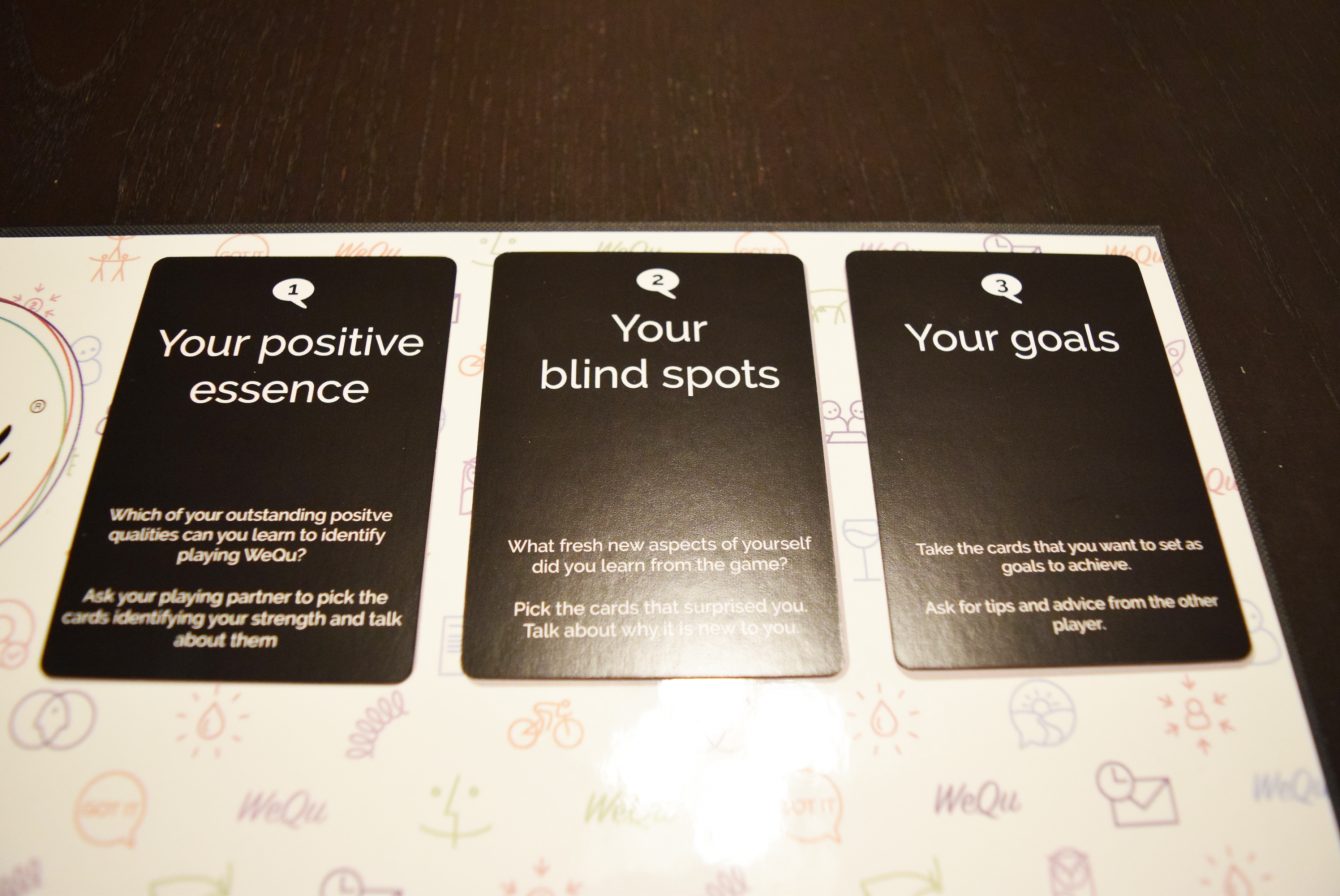 In the end you can tally up your score to see the different aspects of your personality as seen through another persons perspective. The Kickstarter version will have an app that helps keep track and analyze your results, but it was not available yet for us to try.

Jess: WeQu is an interesting tool for learning about yourself and others, but it really doesn’t feel much like a game. There are no points to score, or puzzle to solve, or meeple to move. That said it is a very cool way to create conversations that might be hard to have either because you don’t know much about someone or because you are having a hard time communicating for some reason. I could see coworkers using this enhance evaluations or couple using this to defuse an argument and promote a healthy discussion.

Andrew:  It’s sort of an odd little thing.  Like you say, not really a ‘game’, but more of an interactive personality test…which, I believe, is actually one of their slogans.  I don’t know where this would fit in a gamer’s library, but it does make an interesting conversation-starter, and ultimately, that’s a good thing.

(This preview was done with a prototype sent to us by the developer.  Our opinions were not influenced by their generosity)