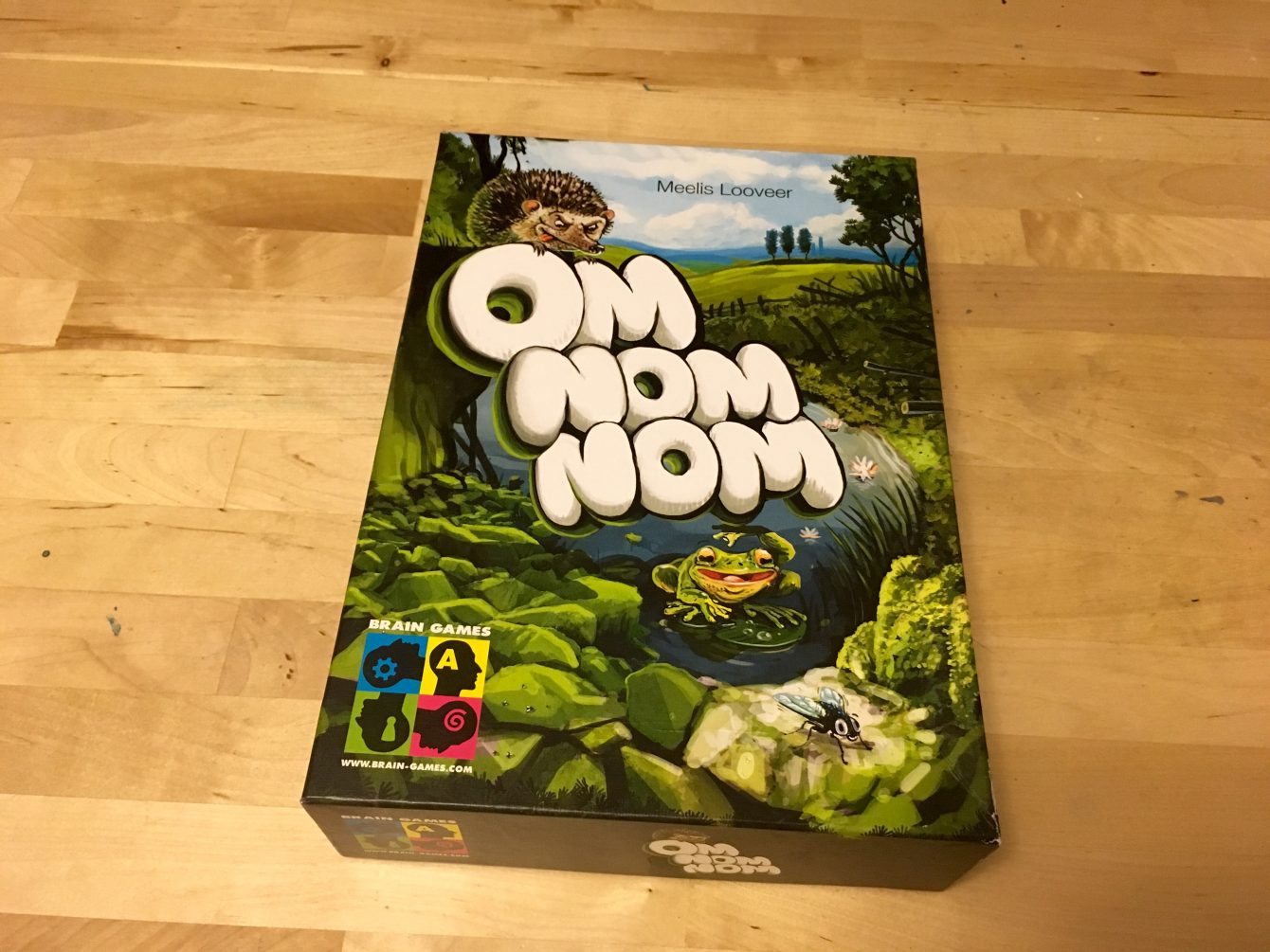 The food chain isn’t the sort of thing I’d have considered as a theme in a board game geared towards children, but in the case of Om Nom Nom – from designer Meelis Looveer and publisher Brain Games – it works surprisingly well. Plus it’s cute, cartoony, and glosses over the idea that these adorable little critters are eating each other. I suppose that helps.

Om Nom Nom is definitely a board game meant for a younger audience, though that doesn’t mean older players won’t be able to enjoy it as well. It’s a very simple premise, really: each player has a hand of six cards (everyone has the same six, representing different animals) that they have to play one at a time in order to try and “eat” as much as they can. Once all cards have been played the scores are tallied up, and at the end of three rounds the highest score wins.

Diana: It was a lot more fun than I expected!

Rob Me too. It’s definitely on the simple side, but it plays quickly and there’s a sort of energy to it. I dunno, it’s hard to explain.

Diana: You mean like that moment when everyone flips over their cards and sees if they get to eat or get eaten?

Rob: Yes! It creates this fun little window of time where players have already committed to their actions but can still sit there and psych each other out. All in good fun, of course.

Despite being simple there’s actually a fair bit of nuance to Om Nom Nom. Wolves eat the rabbits and the rabbits eat carrots; hedgehogs eat frogs and frogs eat flies; cats eat mice and mice eat cheese. Definitely simple, but consider this: if you play a frog card to try and eat all those tasty (and high-scoring) flies, you’re in trouble if another player decides to play a hedgehog. This creates a scenario where you basically have to try to get into your opponents’ heads while simultaneously trying to figure out the best way to “nom” the most stuff. Any cards played will remain visible too, which means savvy players should be able to figure out which cards everyone else still has in their hand and plan accordingly.

Rob: Playing with two people was alright, but using a randomized hand of cards for a simulated third player wasn’t particularly interesting. And I don’t really see myself having as good a time playing solo since much of the fun comes from joking around with other people. I feel like this is the sort of game that would be much better the more people you add.

Diana: Yeah! A bigger group in a silly mood would make for a really good time. Especially with some kids in the mix. It’s just silly enough that I could totally see everyone laughing and “om-noming” every time cards are played.

Om Nom Nom probably won’t find a permanent spot on the shelves of players who prefer complexity in their board games, but anyone looking for some light and silly fun is sure to enjoy themselves, especially if they have or regularly play with kids.

(Thanks to Brain Games for providing us with our copy of Om Nom Nom for review.  Their generosity didn’t influence our opinions)