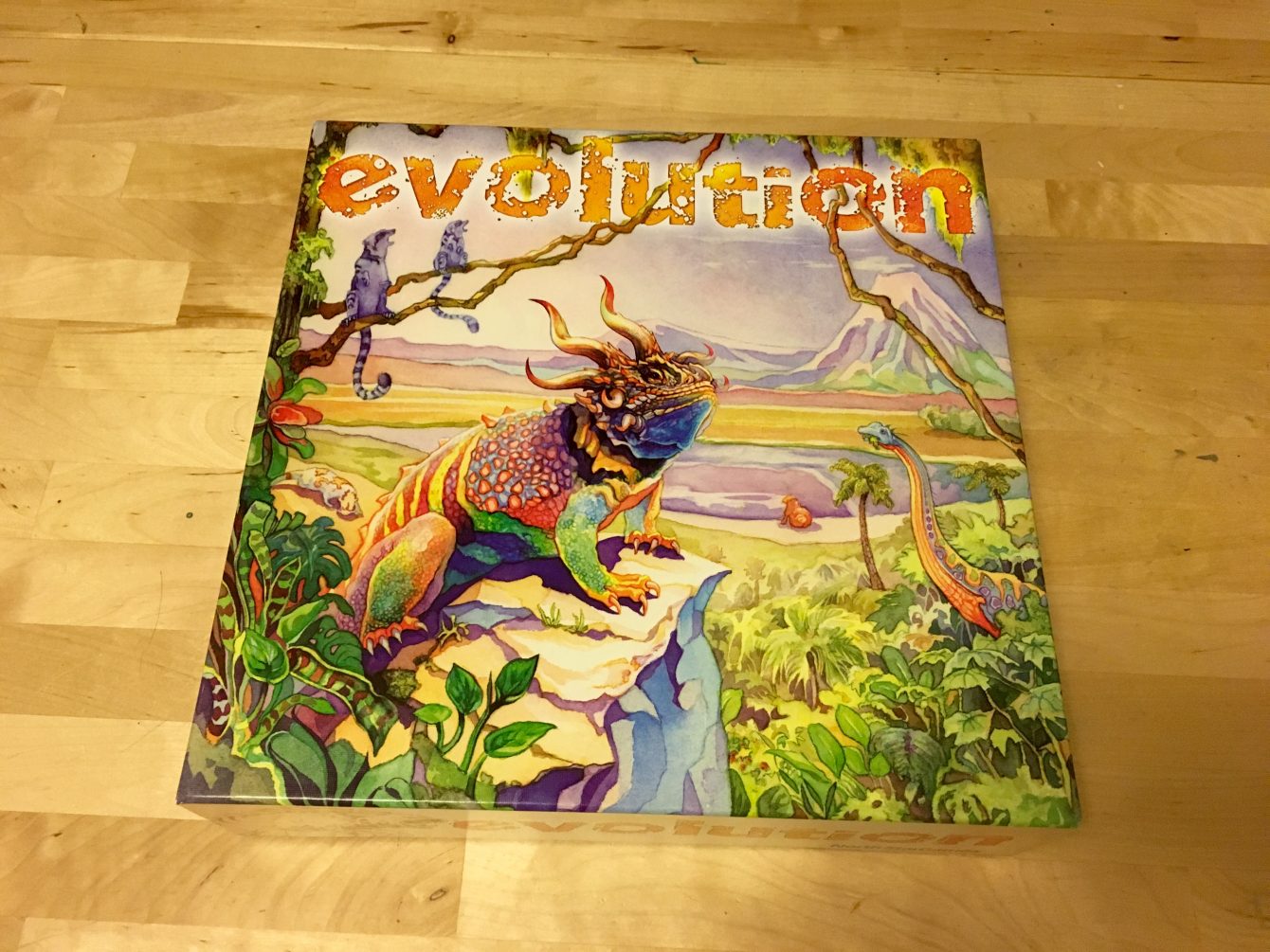 You know, for a while I’ve been hearing that Evolution – from designers Dominic Crapuchettes, Dmitry Knorre, and Sergey Machin, and publisher North Star Games – was an excellent game. Problem is there’s no solo option, which is pretty much an instant “no buy” for me, so I was never able to try it out for myself. Well, that and my adoration of Bios Megafauna made it difficult to justify buying another “evolution gone wacky” board game.

Anyway, thanks to Andrew’s acquisition of a copy (and insistence that I stop talking about Bios), I’ve finally been able to give Evolution a go. It definitely deserves all the praise – and yes, now I know it’s really nothing like Bios Megafauna.

First off I have to admit that this game isn’t anywhere near as heavy as I was expecting – my prior experience with similarly-themed games is probably to blame there.  But seriously, despite having to do with the evolution of multiple species and all that “survival of the fittest” business, Evolution is quite easy to get into. The concepts are abstracted down into some impressively simple mechanics that work very well in practice.

Each round consists of players drawing a number of Trait cards (adjusted based on how many species they have in play), contributing one card to what will eventually be the food stash that all players will need to pull from, playing cards to enhance existing species or make new ones, and finally making sure nobody starves. It’s the traits and the food that make Evolution so interesting.

Rob: Oh yeah, definitely. The way certain abilities can play off of each other, or even benefit other species, is really cool.

Some traits allow a species to collect extra food, others provide a defense against predators, and still others allow them to attack and eat other species. Many of these cards work really well in different combinations, such as when my long-necked herbivores with cooperation were able to preemptively acquire some food before feeding actually began, then share that food with their neighboring species.

Diana: I really liked having scavengers, too. It’s great how they get to take food whenever any carnivore kills and eats another species. Even if most of the time you were hunting my critters.

Rob: Yeah, I still feel kind of bad about that but that’s the nature of the game, right?

Diana: Yeah, sure it is.

Rob: Hey at least both of our scavengers had plenty to eat!

This is a little limited in a two-player game, however, with a limit of two traits allowed per species instead of the usual three in a three to six-player game. There’s still plenty of cool ways traits can play off of each other, but more players means even more possible combinations.

Now, as for feeding, it’s not as exciting as using traits but it is a pretty interesting concept, mechanically. Every time a species is given food (hopefully equal to but never exceeding the size of their population), a food token is placed on their species board. If there isn’t enough food to go around, any species that haven’t been fed enough have to reduce their population to match the amount of food they were able to acquire. Stick with me, I haven’t gotten to the interesting part just yet.

Once everybody is done feeding and adjusting population levels (if needed), all the food tokens on a given player’s species boards are put into their own personal food bag for the remainder of the game. Once the game is over, each food token in a player’s possession counts as one victory point (to be added to things like number of trait cards on surviving species and population sizes). What makes this such a cool idea is that, even if a species is wiped out due to starvation or predation, every single round they did survive will still count towards the final score. Losing a species still stings, of course, but it’s far less upsetting knowing that five rounds of steady feeding still count for something.

Rob: Very true. Like I said, I felt bad about constantly sending my predators after your species but that’s just how the game is played.

Diana: You also screwed up the feeding portion of the last round by adding a -3 to the offer.

Rob: It’s how the game is played!

Diana: I’m just giving you a hard time. I actually really enjoyed playing this! It wasn’t anywhere near as dense as I expected but there was still plenty to think about on every turn. And the first player token is adorable.

Andrew:  Hey, just to sneak in a word here.  Jess and I also think Evolution is pretty dang awesome, and at PAX East this year, we got a sneak peek at a preview of the digital version being developed by North Star Games.  We didn’t get to take any shots of the game, but the animations were fantastic and the look and feel was great.  Can’t wait to get our hands on this.  Once we hear more from North Star on it, we’ll pass it along!

(Thanks to North Star Games for providing our copy of Evolution for review. Their generosity didn’t influence our opinions)

One thought on “Evolution Review”