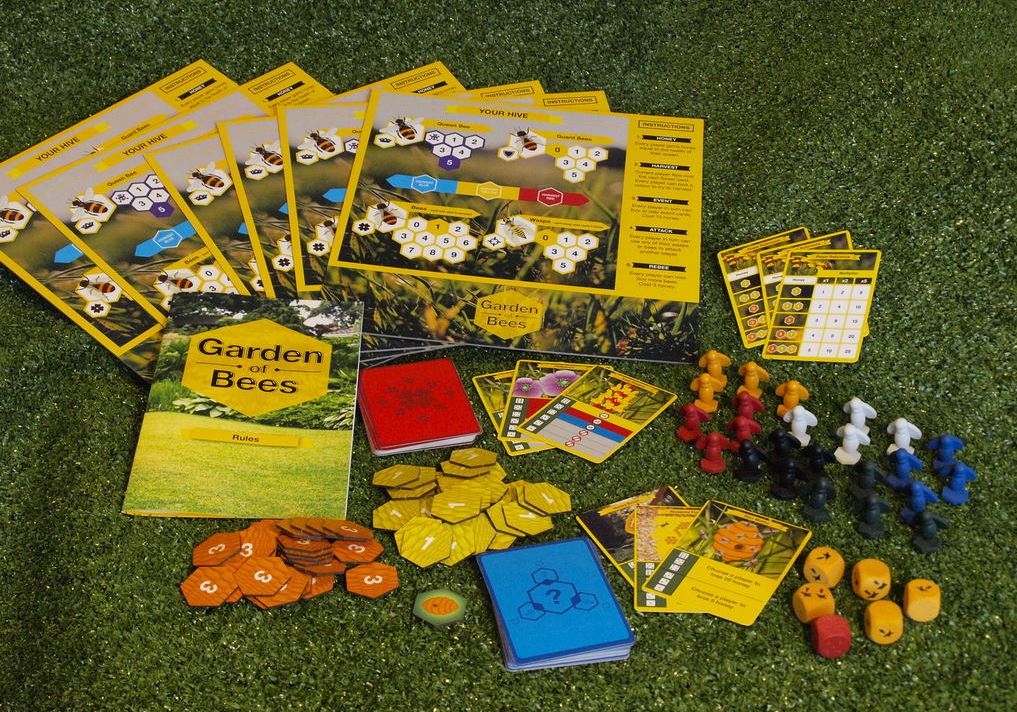 Garden of Bees, the first offering from Decking Awesome Games is up on Kickstarter right now.  In it, 2-6 players will each control their own hive of bees, competing for dominance over the garden.  They will collect honey, harvest flowers, draft drones, and attack each other, with the ultimate goal of being the last queen bee standing.

Andrew:  Honestly, when I first looked at Garden of Bees, the theme didn’t immediately convey the idea that this game was a knife-fight, but that’s exactly what it is.  Quick, brutal elimination of the opposition is the goal, and everything about your turn is dedicated to that end.

Jess:  Of course, that doesn’t mean the game doesn’t have room for some cuteness.  Our components are pre-Kickstarter, so we have harvested some shots from the campaign page.  However, we think that these little bee meeples (beeples, obvi) are adorable!

**Kickstarter Prototype Mumbo Jumbo – All photos are of prototype components, either taken ourselves or harvested from the Kickstarter page.  Ya’ll been warned!**

Gameplay takes place over the course of 5 phases.  Each phases is resolved by every player before moving on to the next.  In this way, Garden of Bees features very little downtime between actions, which well suits the game’s fast play style – turns are fast and the action is tight.

Event cards can be extremely powerful, often providing an excellent advantage for the player activating them, or possibly harming everyone else.  The Event cards are also the only way a player can acquire Guard Bees (which act as a barrier for your queen’s health, dying first), or Wasps (which are not depleted when they are sent out to attack, but must be payed honey each time they are used).  By drawing a good event card (and rolling well on it), a player can dramatically swing the state of their game board.

Ultimately, the aim of Garden of Bees is to be the only queen left alive.  Each time you send attackers against an opponent, you will roll one of the custom attack dice per bee sent.  Any stings you roll (the dice feature 3 ‘miss’ sides, 2 ‘sting’ sides, and 1 ‘double sting’ side) either kill a Guard bee or lower your target’s queen’s health.  Last bee standing wins!

Andrew:  So as you can see, there is a *lot* of dice-rolling in Garden of Bees.  What may not be apparent from the theme or the mechanics is just how focused on gambling and risk the gameplay tends to be.

Jess:  Yeah, that caught me pretty off-guard.  While I enjoy plenty of ‘push your luck’ style games, the constant mercy of the dice isn’t something I was necessarily loving – it makes planning really tough, and it is entirely possible to commit all your resources to an attack and have it come to nothing.  But on the other hand, there was never a reason to hold back, ever, so I never bothered to do so.

Andrew:  Yeah, for sure.  And, ultimately, I think that’s where Garden of Bees lost me.

And it breaks our little honey-filled hearts to say it, but Garden of Bees did lose us.

See, normally we don’t much care for take-that, head-to-head games, but that was absolutely not our issue here.  And the game’s gambling core didn’t trouble us, beyond this central issue – more than anything, our problem with Garden of Bees is that we didn’t feel we had enough choices.

Gathering honey each turn is complicated by the Harvest phase, where you can gamble on the roll of the dice.  Sometimes, the payouts can be huge – up to 5x your initial bet.  But much more frequently, a bad roll will set you back everything you wagered, and then your options are even more limited.  So, honestly, after a while, we simply started ignoring the Harvest phase altogether, because everyone just wanted to amass enough Honey to afford Bees or an Event card.

And Event cards aren’t always a safe bet, either.  Since they are also all dice-driven, it is entirely possible to invest 10 Honey in a card that ends up providing you with a single Bee (worth 3 Honey), or 5 Honey, or a lonely Guard Bee.  Sure, if you roll great you can get an advantage (or royally screw your opponents – the idea of having a player cost you 20 Honey could provoke a physical attack), but everything is entirely random.

Attacking is a no-brainer.  Since Bees don’t do anything other than attack, there was no real reason not to invest all your Bees every turn.  At most, your decision comes down to whom to send your bees after.  And even that is a crap-shoot (literally), since attack dice miss a staggering 50% of the time.

Finally, Garden of Bees suffers from a ‘Poor get poorer’ problem.  When someone manages to successfully attack your queen, you will get less Honey the following round (since it is tied to her health).  Not only is there no catch-up mechanism, but the more you get beaten down, the harder it is to hit back.  It makes being in anything other than first place truly suck, and drags out the end of the game, as two nearly-exhausted hives slap at each other until one dies.

Andrew:  So, it truly bums me out to say it, but Garden of Bees is a pass for me.  There is a lot of potential here, and maybe with some rebalancing and some rules tweaks, it could be exactly the kind of game we would enjoy, but as it is, it felt like a game bereft of choice, and that doesn’t work for us.

Which isn’t to say it isn’t for anyone.  The gambling aspect of the game makes it good for folks who like that sort of thing, especially if you also crave take-that gameplay.  And admittedly, it scales perfectly well, playing quickly at any player count.  We encourage you to check out the Garden of Bees Kickstarter and decide for yourselves if this is the kinda game you’d enjoy.

Jess:  I love bees and I love the idea of a bee-based game, so I so wanted to love this one – it just didn’t quite land for me.  We wish Decking Awesome Games all the luck in the world with their KS, and we’re sure we’ll see more from them in the future.

(This review was based on a prototype version of the game, provided to Gameosity explicitly for this purpose.  Images from the Kickstarter campaign may have been used as a supplement to our own photos, none of which are not necessarily reflective of the final version of the game)