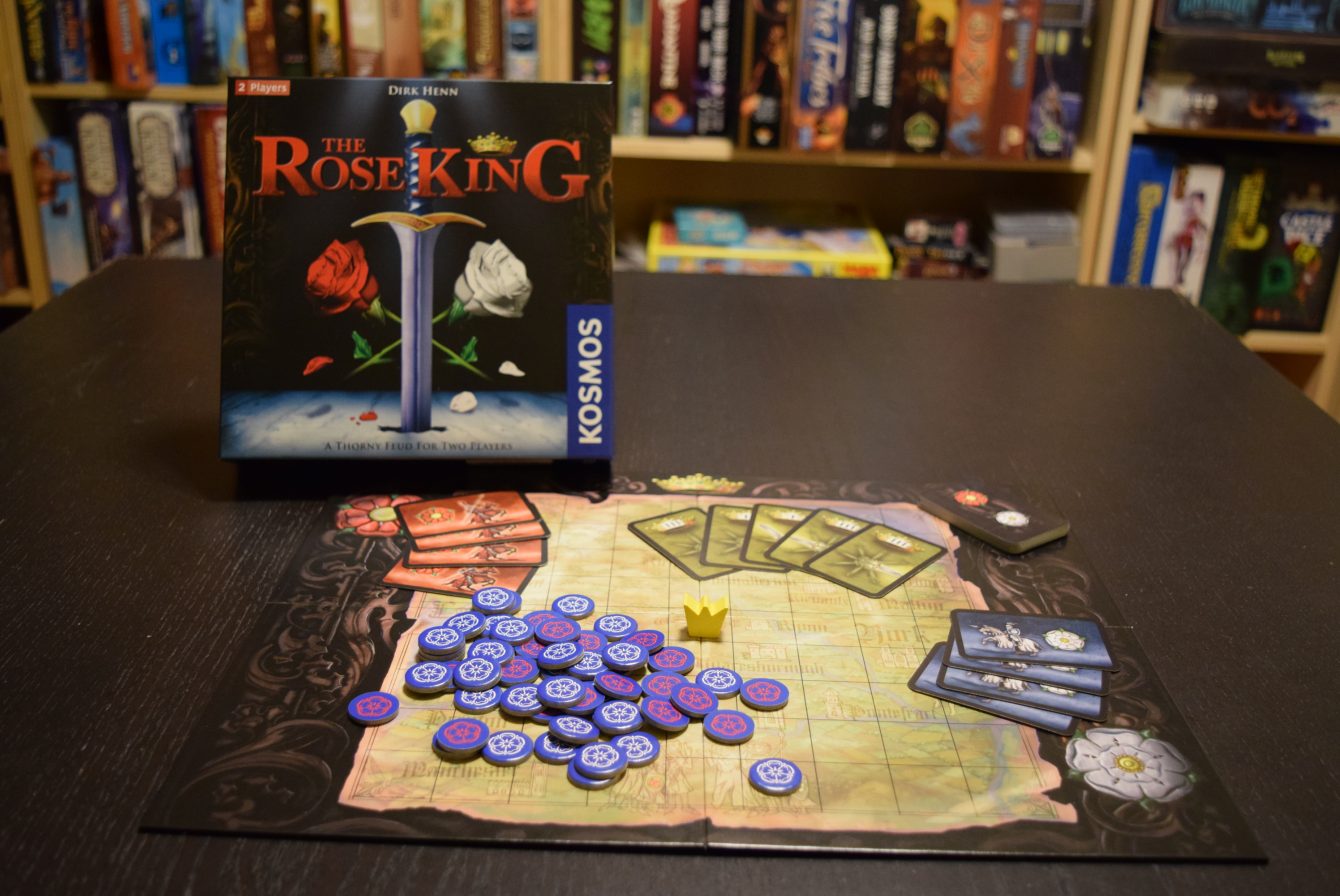 In The Rose King, by designer Dirk Henn, 2 players will reenact a bloody war between the houses of York and Lancaster in 15th century England.  This brutal conflict, called the War of the Roses, changed the face of English nobility and caused heavy casualties on both sides as it dragged on for over 30 years.

Jess:  But lucky for us, The Rose King is really more about moving around a wooden crown and placing colored tokens.

Andrew:  Thank the powers for a good abstract game!

The goal of The Rose King is to control contiguous areas of the field – the bigger the area, the more points it will be worth at the end.  Claiming a spaces is as simple as moving the crown token to them – each player will take turns moving the same token, so one player’s choices immediately change the other’s possible moves.  Wherever the crown lands, the controlling player places one of their power tokens.

To move the crown, each player will use one of their Power cards.  These cards depict a sword pointing on one of the 8 directions (relative to the crown’s current position), and the exact number of spaces that card would cause the crown to move.  The restrictions on movement make choosing the right card sometimes quite challenging – the crown cannot land outside the board (obviously), nor can it land on an existing power token, yours or your opponents.

The only exception to this rule is when a player chooses to use one of their Hero cards.  In doing so, a player can remove an opponent’s power token and replace it with their own – potentially breaking up a large group of their opponent’s tokens or bridging the gap between two areas of their own.  Each player only receives 4 Hero cards for the entire game, however, so canny use of these limited resources is extremely important.

Andrew:  The mechanism by which the crown is moved is definitely my favorite aspect of the game.  Since your options are limited by the cards in your hand, and since what cards each player has is always open information, it creates a really effective blend of luck and strategy.  You not only need to think about your own movement options, but also what your opponent will be able to do on their turn.  It’s just thinky enough to be engaging without being bogged down or complex.

Jess:  So, gamer geek confession time – I don’t really care for chess or chess-like abstracts.  And when I first looked at The Rose King’s dead-simple layout, I have to admit I was a little disheartened.  But the game suffers from none of the stifling contention that bug me so much about head-to-head abstracts, and it doesn’t overstay its welcome at all.

Andrew:  Yeah, I agree.  It is strategic, that’s for sure, but your options are quite finite and even your opportunities to disrupt your opponent’s strategies are limited.  It’s a tight game, but not a fussy or unfriendly one.

Jess:  Unless you break up one of my 12-token territories.  It gets pretty unfriendly at that point.

Andrew:  That territory was worth 144 points!!!

Jess:  Un. Friend. Ly.  But I forgive you.  Because now you’re out of heroes…

The Rose King is a really great example of an abstract game done right.  It is dead simple, and it is in its simplicity that its appeal can be found.  If you need thematic penetration or complex strategy or varied paths to victory, you’ll need to find something else to play.  But as a 2-player, 20-minute jump that’s just light enough to chat over while still making you slow down and play, you can’t go wrong with The Rose King.

(Thanks to Thames & Kosmos for providing us our copy of The Rose King for review.  Their generosity didn’t influence our opinions.)