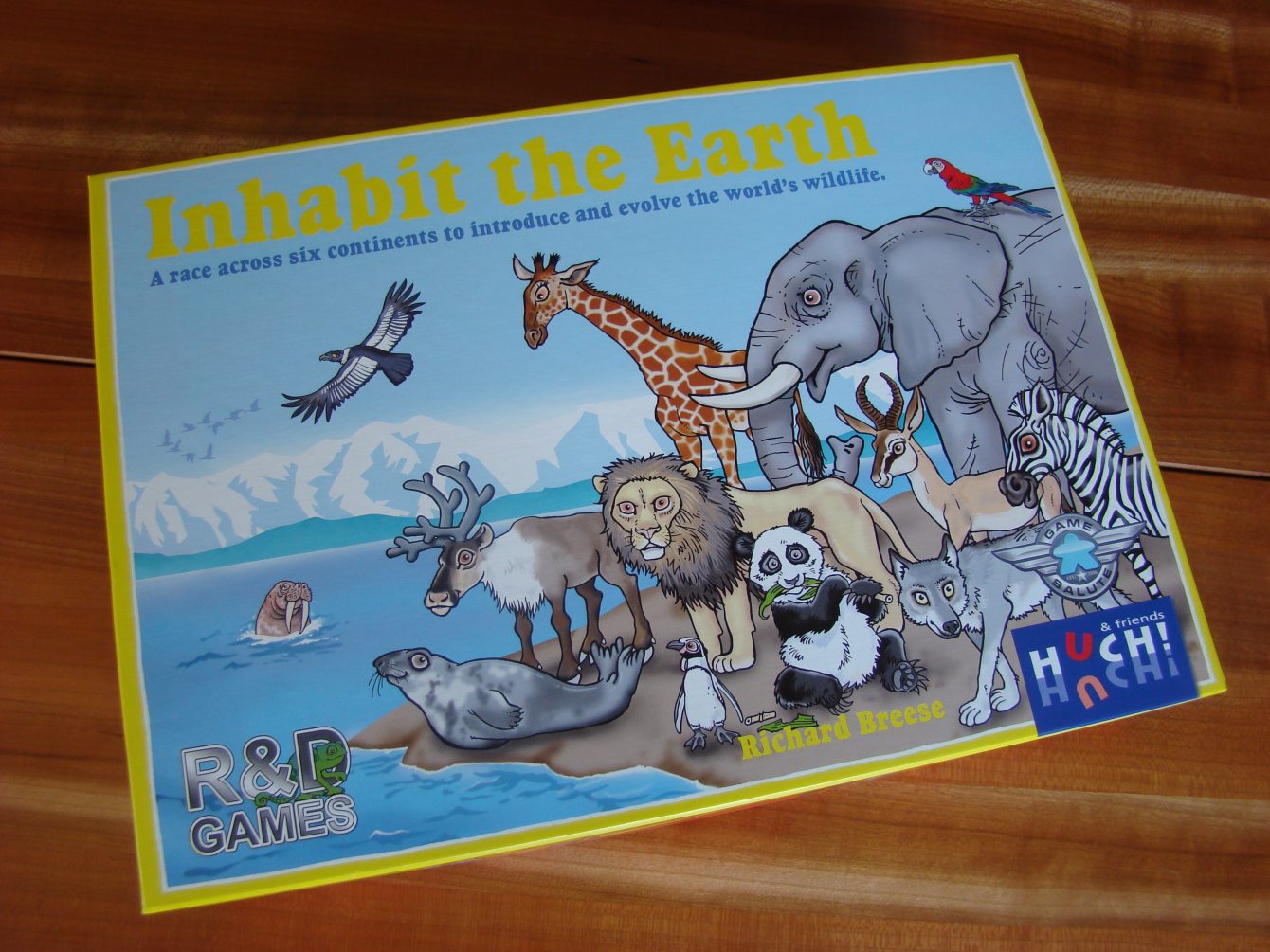 Richard Breese has achieved a kind of auteur status in the boardgaming world.  If Eric Lang is the J.J. Abrams of modern boardgaming, Richard Breese, with his off-center themes, his homegrown productions, his detailed designer notes incorporated into the box art, the colorful, idiosyncratic drawings by his sister, Juliet, is the Wes Anderson.

His Keyflower was, curiously enough, one of my very first forays into designer boardgaming, and it remains one of my favorite games to date.  So, despite the somewhat off-putting cover art (all demonic creatures great and small), his most recent production, Inhabit the Earth, was an automatic purchase for me. 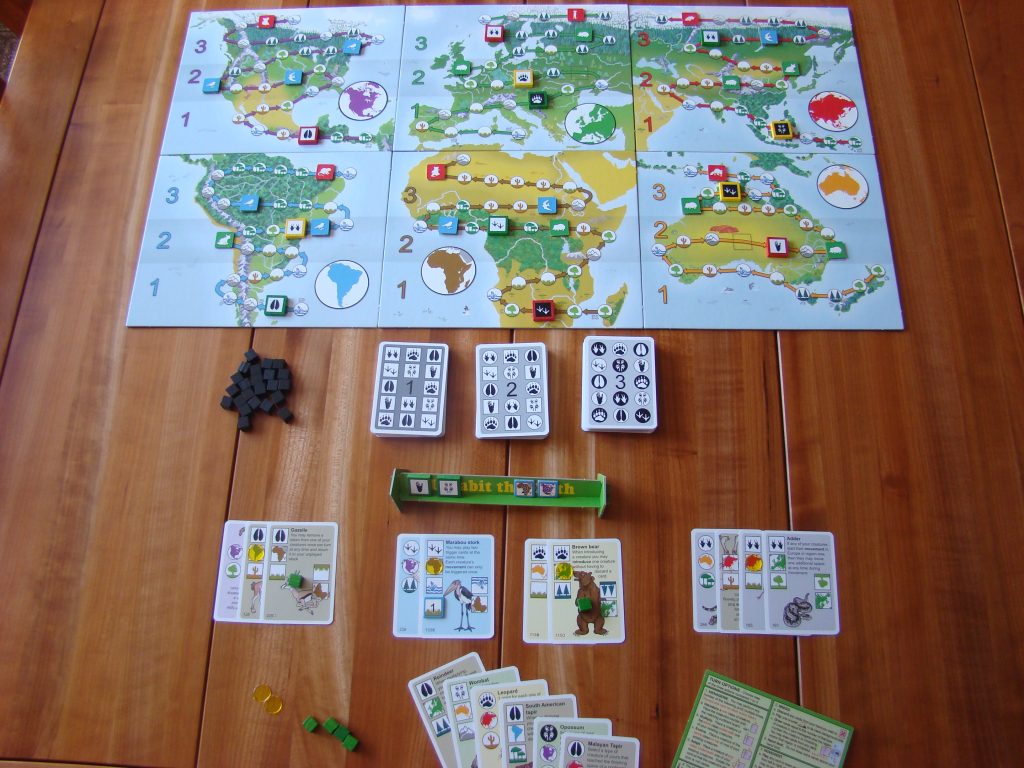 Thematically, Inhabit the Earth is a kinder, gentler Evolution.  While Evolution focuses on survival of the fittest (identifying your opponents’ weakest creations and chowing down on them, or shoring up your own shortcomings), Inhabit the Earth, ironically, has a more evolutionary perspective: your species never really die out—they just evolve into different species.  No one in the game is attacking anyone else.  Rather, it’s a race up the evolutionary ladder. 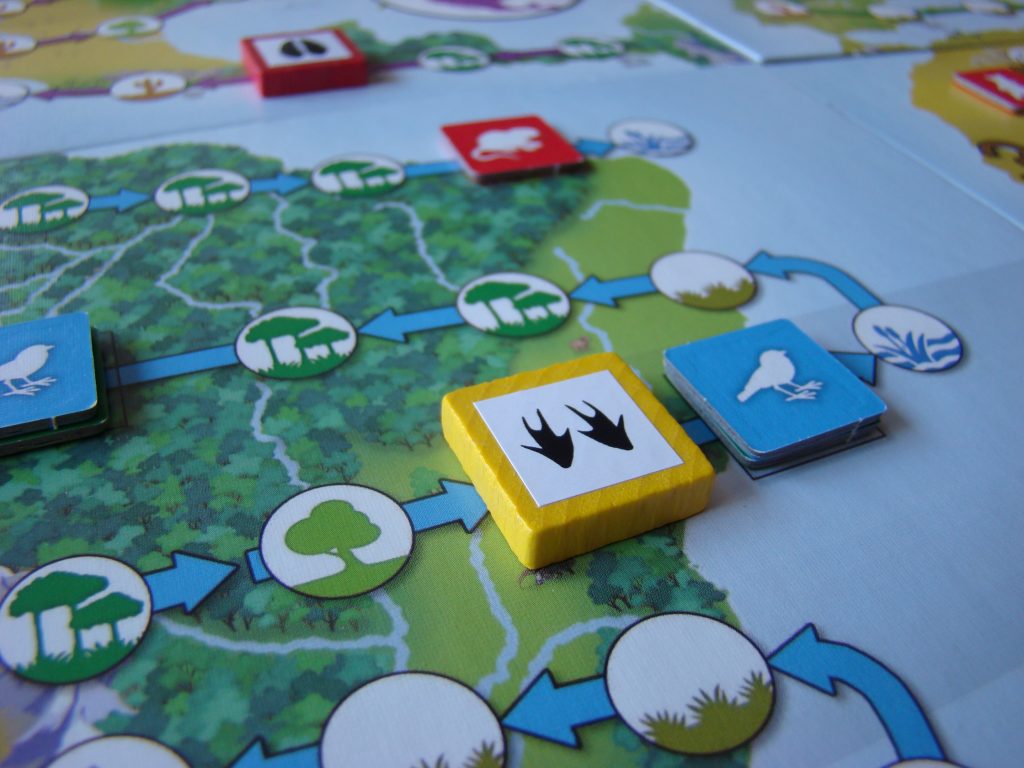 The challenge of the game is to tinker, god-like, with your species so that they can better adapt to their environments and leapfrog over your opponents’ species.  Let’s say your toucan has come face-to-face with a decidedly un-toucan-friendly desert.  You can extend your god-finger down from the clouds and mate your toucan with a vampire bat to create some unholy new species that will be just as comfortable in the desert plains as it will in the jungle.  Also, your toucan can now migrate to North America if that continent’s evolutionary race seems more profitable.

Inhabit the Earth is essentially a race game combined with a tableau-building game.  You use cards to introduce and adapt your species in your own individual tableau, and then you migrate those species, racing them up six different continental south-to-north S curves.  On your turn, you make adjustments to your animals through one of the following moves: 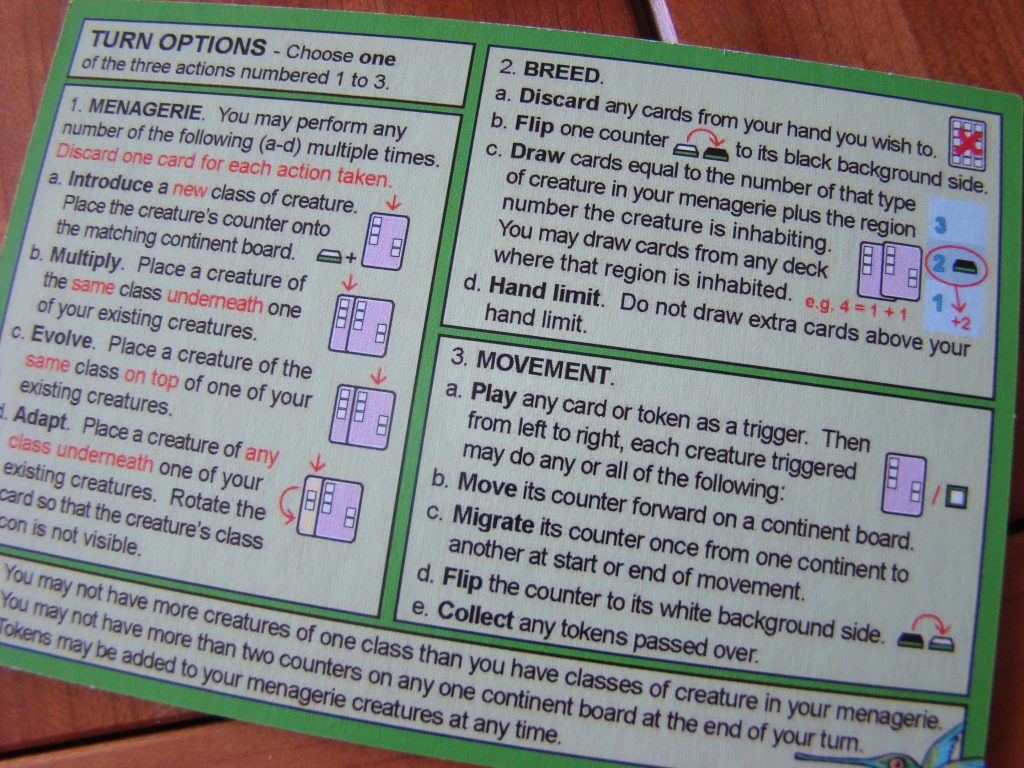 These moves are generally pretty quick, but they all build toward another kind of turn that you can take when you are ready: migration.  On a migration turn, you have the opportunity of moving at least one (but preferably more) of your animals up their respective tracks on the board, hopping over other species, tearing through forest and grassland, rushing to be the first in the northlands.

These turns are inevitably longer (by quite a bit) than the usual turn, because the active player has to move his or her animals, one at a time, checking multiple icons on each animal.  But these longer turns feel worth it.  They are the culmination of a lot of planning.  For many turns before that, you have bred and adapted and multiplied and evolved, and now, finally, you thunder ahead a bunch of spaces all at once.  Then, afterward, you and your animal are exhausted, and you revert back to the shorter planning turns for a few rounds. 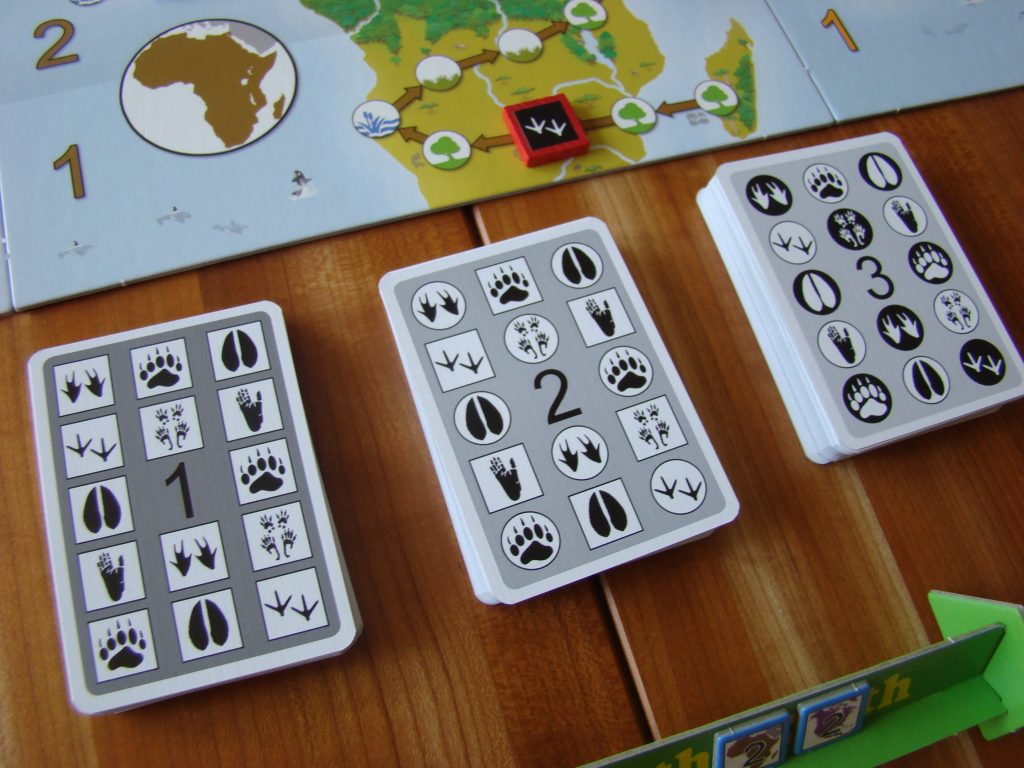 That ebb-and-flow pacing of the game is one of the most elegant things about it.  Granted, it requires a certain breed of player to appreciate it.  Some players who are unable to take an interest in other people’s games unless they are directly impacted by them might be bored while their opponents are working through their migration turns.  And, of course, there will be more of this downtime in games with more players.  But for those players who can muster the energy to be involved in what other players are doing (let’s call them the “socially unselfish”), there is joy to be found in the way an animal has adapted perfectly to multiple environments and launched its way forward through five or six spaces in one fell swoop—whether that animal is yours or an opponent’s.

The components of the game are functional.  Your animals are represented by symbolic stickered wooden squares—which is fine.  Nobody likes those little plastic winks, but they are used sparingly in the game.  Each player has an individualized tray constructed out of three cardboard pieces, which is a nice addition.  Graphically, my primary problem is that the six map boards that compose the main playing surface don’t actually meet properly at the edges to create an authentic looking world map.  It’s a minor thing, but I am just compulsive enough to long for seamless graphic design. 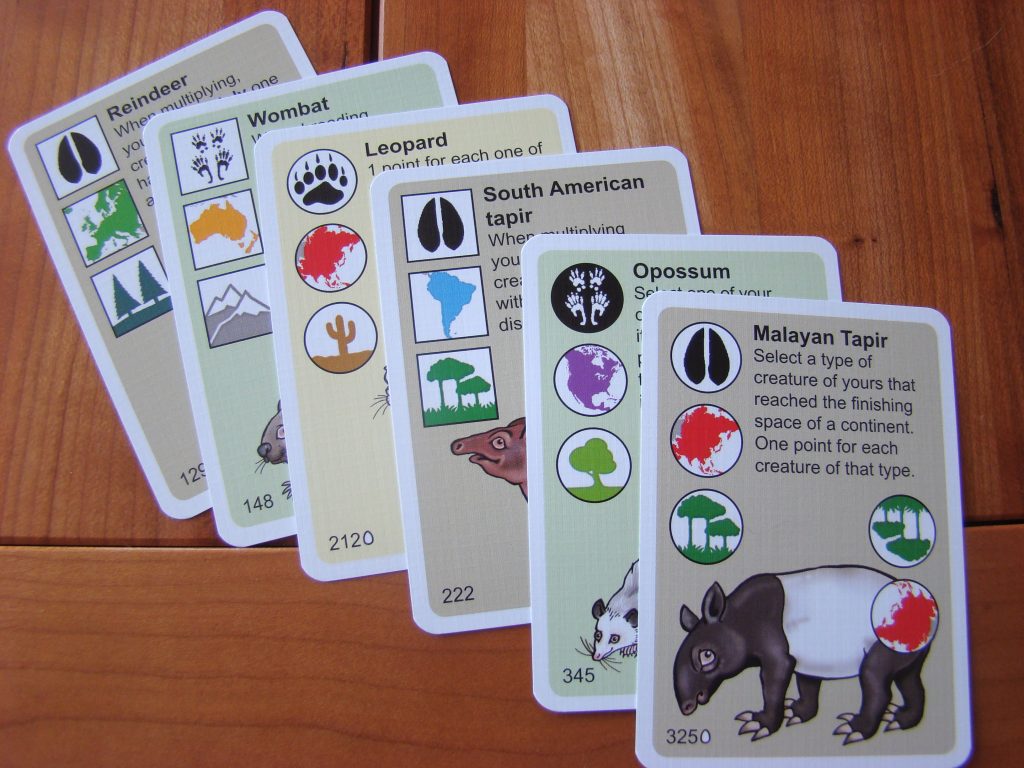 Then there’s the card art.  The truth is that the art is actually very nice—quaint, homespun, generous in its variety.  Every one of the 162 cards in the game features a unique animal with unique art.  (On further reflection, you realize that the only reason the cover art is so menacing is that the animals are gathered together, brooding, gazing upon you like some hive-mind menagerie; individually, they come across as downright amiable.)

Andrew:  Just to interject, I don’t know that I agree with that last sentiment.  Have you seen this bear?  This bear has seen some things, my friend.  And it came back…changed… 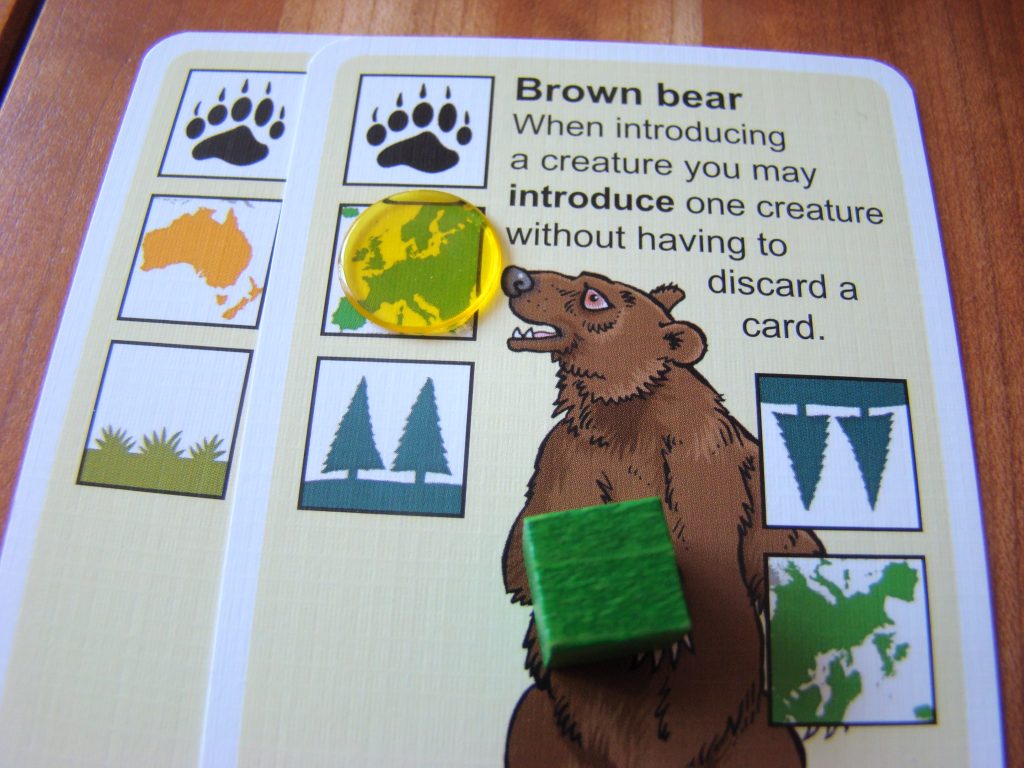 Ultimately, yes, I highly recommend the Inhabit the Earth.  The game is a pleasure to play because it feels crafted rather than assembled.  It’s not like other games you’ve played.  Yes, it has multiple-use cards, special powers, bonus scoring, and all those other little ornaments—but, rather than being some combination of other, pre-existing game mechanisms, Richard Breese has created something that feels authentically new. 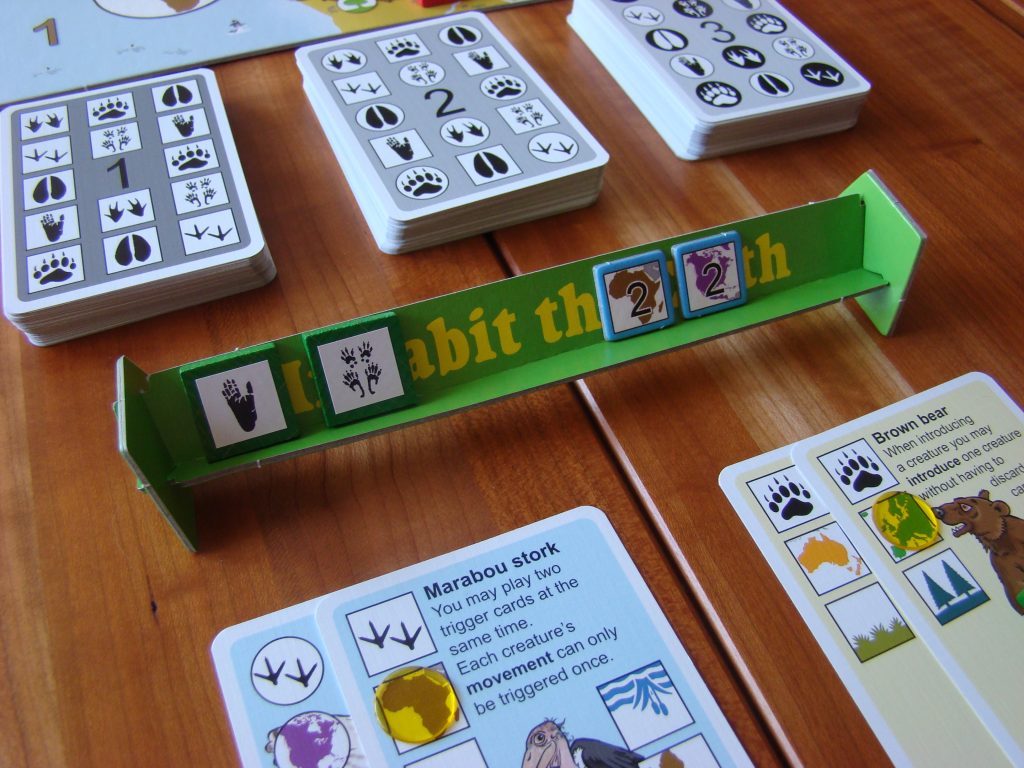 It’s fun to work on a species of animal that belongs to no one else at the table.  It’s fun to give that animal new adaptations, to build that animal into an incredible cockroach of a species that can traverse any landscape and live in any continent.  It’s fun to make progress and watch your efforts pay off in big moves.  Like many excellent games, Inhabit the Earth starts small and grows bigger and bigger as you invest time and care into your personal wild kingdom.  There’s great pride in watching your buffalope canter through a marshland, fighting its inevitable way north toward evolutionary victory.