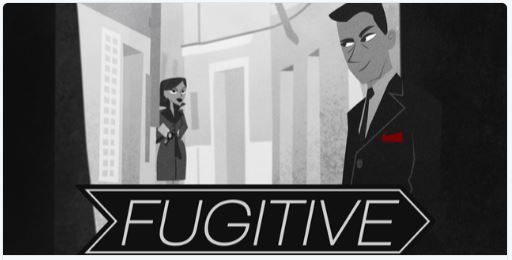 Tim Fowers has already done the unlikely.  In the first game of his which I had the pleasure of playing, Paperback, he managed to create a spelling game that I really love (the required backstory there is that I generally don’t love spelling games).  He returned in Burgle Bros (which we will be reviewing shortly), delivering a really fun co-op experience in a small, expertly-designed package.

And today, in Fugitive, Fowers (with an awesome assist from his ever-present artist, Ryan Goldsberry) brings to us a game about a quick-thinking and fleet-footed rogue, desperate to escape the ever-tightening manacles of the canny Marshal, who pursues her quarry with implacable certainty.

Andrew:  Or, if you want to be really unromantic about it, Fugitive is an asymmetrical abstract card-laying, bluffing, and deduction game for 2 players.

Jess:  But where’s the fun in that when you can have…this! 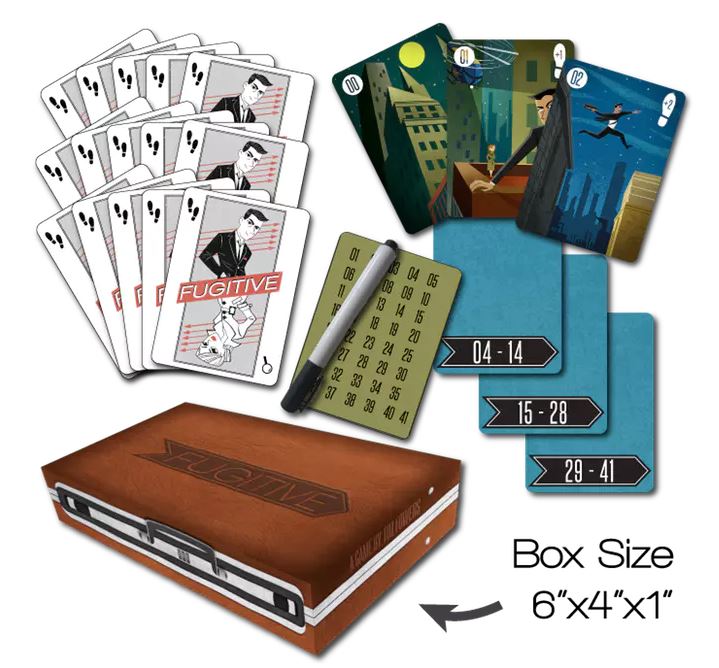 (Kickstarter prototype stuff – Our copy of the game did not have the final art, so keep that in mind!)

Andrew:  So, the Kickstarter page does an admirable job of conveying the rules of the game, but the summary is really quite simple.

The Fugitive (aside from being a great Harrison Ford/Tommy Lee Jones vehicle) wins by playing the ’42’ card, which represents a clean getaway.  To do this, though, he will need to build a chain of cards in ascending value.  There are limits to the intervals that the Fugitive can jump in card values, so he will need to create stepping-stones of cards – face-down piles that represent his hideouts, climbing ever-closer to 42 and the freedom it represents.

Jess:  I’ll be honest, at first I had a little trouble grasping the Fugitive’s strategy.  I mean, it might seem obvious that you should ascend in card values as quickly as possible, so you should draw lots of cards to make your jumps as broad as you could.

Andrew:  Right, but Fugitive has a bit more going on than just that.  Once I got the sense that’s what you were going to do, I switched to the ‘roadblock’ strategy, and started draining cards off the higher value decks to head you off.  It’s important that both players be able to switch tactics mid-stream.

One of the many effective aspects of Fugitive’s design is its asymmetrical playstyle.  The Fugitive plays a very calculating, cerebral game, with plenty of bluffing and card manipulation, pulling out every trick in the book to stay ahead of his pursuer.

The Marshal, though, is more Terminator than anything, relentlessly pursuing.  With a string of good (and well-deduced) guesses, the Marshal can leave her opponent scrambling for a bolt-hole, or caught entirely.  However, a few bad guesses will leave the Marshal desperate for a lead as the Fugitive fades further and further into the distance.

Jess:  I guess it clicked with me more once I got the swing of it – the strategies for both sides of the table are definitely different, and even though it really is a simple game, it took me a little to get into the groove.

Andrew:  But you won the first time we played!  You always manage to escape!  And catch me!

Jess:  Look, I may have been learning how to play, but I’m an expert on how you think, my love.

And that’s another thing that makes Fugitive is a really unique game; it rewards not only smart tactical play, but also knowing your opponent.  As the Fugitive, psyching out the Marshal is the name of the game – playing the player is the only way to keep ahead of that unstoppable hunter.  And as the Marshal, understanding the psychology of your prey is the best way to make sure you keep up.  But because of the randomness of the card draws, both sides will be desperately adapting to the ever-changing landscape, and each new card will become precious as the end-game approaches.  It all combines so well to create a really simple, yet really engaging puzzle for two.

Our Kickstarter prototype lacked Goldberry’s fantastic artwork, as well as the event cards which will be added to the game and, once drawn, will add unique, random elements to further enrich the experience.

Andrew:  I have to say, I’m pretty enamored with Fugitive.  It offers a single-serving logic puzzle that two people are simultaneously trying to solve to mutually-exclusive ends, and that’s something I’ve never seen before.  The table dynamic generates genuine tension in the best way, and I can’t wait to see how the Event cards will change the balance of things.  And more than all that, it’s just damn fun.  I’m really excited for this one.

Jess:  While I’m not as hot on it as you are, I will admit that the art showing up on the Kickstarter page may be enough to get me to want to see it on the table some more.  I guess the thing about it that I really liked was that, when it works in your favor, you just feel so clever, but when your opponent is just so clever, well, you know. And despite the fact that it is frequently a ‘thinky’ game, there have definitely been some nail-biting moments in it, and that’s always a great thing.

So there you have it, Fugitive from Tim Fowers, live on Kickstarter now! Head on over to the campaign and catch your copy before it slips away!

(Thanks to Tim Fowers for providing us our preview copy of Fugitive. His generosity didn’t influence our opinion)