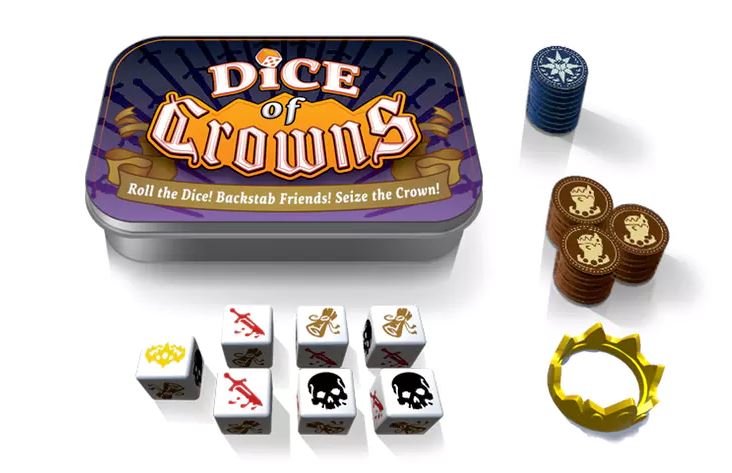 Dice of Crowns is a push your luck dice game (duh) up on Kickstarter right now. Designed by Brander Roullett and produced by Thing 12 Games, it has-

Jess:  Another push your luck dice game?  Let me guess, it has gorgeous custom dice.

Andrew:  Well, they are only prototypes, but yeah, the dice look really nice, and-

Jess:  And I bet you’re rolling to get specific combinations of faces, and some faces are bad and make you bust, right?

Andrew:  Yeah, totally, everyone is trying to roll crowns to-

Jess:  Crowns, martians, zombies, we own a million of these games!  And I love them because they are light and portable and quick, but how much fun is it to sit around and wait for you to finish rolling your dice?

…*ahem* Dice of Crowns is, well, it’s precisely what it may look like.  In turns, everyone throws the dice, hoping to get the right combination of symbols before they bust, hoping to be the first player to acquire 3 claim tokens and thereby seize the crown from their hungry rivals.  Each die has 4 types of symbols, and rolling them in combination has different effects:

Andrew:  Because when you roll, any dice that come up as Scrolls are immediately passed to other players.  Who gets those dice is up to the rolling player, but once she hands over the dice, those players get to roll them immediately and, depending on what face is shown, different effects are triggered.

Jess:  Ah, so I get it now!  It’s a push your luck game, but where the really interesting moments are born is when you roll a bunch of Scrolls and have to decide which opponents you give them to.

Andrew:  Right!  Because obviously everyone is in it for themselves, so ideally you’d never give them anything.  But when it comes time to hand those dice out, you need to be sure that the person you are giving them to isn’t going to turn around and stab you with them.  And that means bargains, banter, and perhaps some begging.

Jess:  That sounds pretty neat!  One question; how do you stab someone with dice?

Andrew:  A good running start would do it, I think.

One of the things I really enjoy about Dice of Crowns is how, given the quick format of the game, all these little micro-betrayals come and go so fast, it’s hard to get annoyed about any one of them.  It lets everyone play with their fangs out, backstabbing all over the place, but always moving the game forward.

Our prototype dice are 3d printed and they are perfectly serviceable, but the Kickstarter campaign, which has about a week left, is so over-funded that backers can look forward to engraved 16mm dice, which I am seriously excited about (my mild obsession over nice custom dice is well-documented).

Jess:  The game even comes with a tiny crown which the victor may place upon their head as they acquire their last claim token, all the better to instagram with!

Dice of Crowns is a very light filler of a game, and it embraces that wholeheartedly in its design.  The game comes in a metal tin that easily fits in a pocket or bag, and its total playtime is around 10 minutes (maybe a little more with the advanced variant that makes use of Fate tokens).  It’s a game that knows precisely what it is, and it delivers just enough clever twists on the well-loved push your luck mechanisms to stand on its own.

Andrew:  Also, it’s incredibly affordable.  Not that I feel that should sell a game, but it doesn’t hurt!

You can check out the Dice of Crowns Kickstarter now, as it is *well* past funded.  If a tin full of stabby dice sounds like your kinda fun, then definitely head on over and back it!

(Thanks to Thing 12 Games for providing us with a prototype for preview.  Their generosity didn’t influence our opinions)