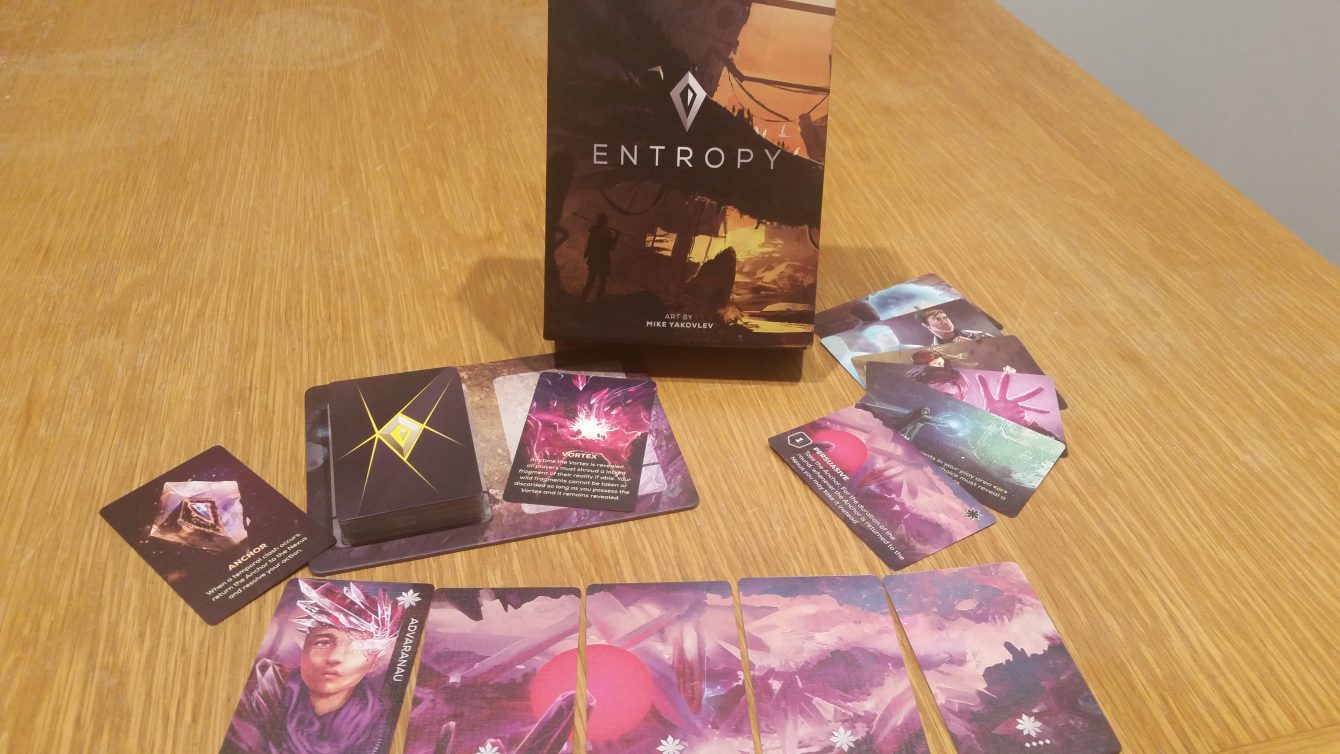 “Bluffing” is a game mechanic that doesn’t always resonate with me.  I’m not sure why – whether it’s my open, earnest demeanor, my group’s tendency toward more cooperative games, or the fact that Jess is ALWAYS the traitor and ALWAYS destroys us, but bluffing isn’t really my thing.

Now, Entropy from Rule & Make, is not a bluffing game, at least not on its surface.  It’s a set collection, action-selection style game with a snappy, simultaneous playstyle.  Designed by Allen Chang and Alistair Kearney, it also features gorgeous art by Mikhail Yakovlev that really brings this game to life.

A whopping 2-6 players will each take on the roles of multiverse-hopping individuals who are trying to survive something of a multi-dimensional cataclysm; their realities have crashed into each other, and each player is trying to be the first to weave together enough fragments of their native dimension to hop across and make it home.  Each character’s dimension cards, or Fragments, have distinct (and beautiful) artwork, which form a mural as they are collected, and each player has a unique ability to help them in their quest for home.

Andrew:  Of course, all that delicious theme is pasted on – Entropy is a set-collection game with clean mechanics and quick turns.  Thematic it isn’t, but that’s fine, because the gameplay is fun and what theme is present is attractive and actually really evocative.  It’s fun to imagine who these characters are and what their worlds must be like.

Turns work like this.  Each player has 6 (fewer in a 2-player game) action cards.  All but one are identical, but one is unique to each character.  Every turn, all players will choose one of their available actions, place it face down, and then simultaneously reveal it, resolving them in initiative order.These actions all center around gathering and manipulating Fragment cards, both your own and your opponents, as you strive to collect and uncover all the Fragments of your home reality.

Actions are resolved in initiative order.  Each Action card has two possible uses:

Once an Action is used, it is temporarily discarded, meaning that you have less options each turn (and everyone knows it…but more on that in a second).  After 4 total Actions have been resolved, the Temporal Reset phase activates.  This ominously-named mechanism causes all cards not nailed down (in player tableaus) to be reshuffled.  This keeps the cards churning and also lets players reclaim their used Action cards.  Once that’s done, the game continues until someone manages to piece together enough Fragments to make it home!

Jess:  Obviously, in all of this Fragment flipping and action picking, there are bound to be turns when two (or more) players pick the same action.  And that’s what triggers a Temporal Clash ::cue thunder & lightning::

Ironically, for as huge as it sounds, a Temporal Clash really means that all players involved in the clash have their turn neutralized, taking no Action but still losing the Action card they chose.

Andrew:  Now, admittedly, I pretty much detest any ‘lose a turn’ mechanisms in games, and in a game where you are racing to be the first to accomplish an objective, losing even a single action stings all the more.  However, there are three elements that act as balms to soothe your temporally ravaged body.

The first is the Anchor that I mentioned.  If you have it when you clash, then you discard it and still get to take your action.  Those you clash with, however, still lose their action.

Second is that all players involved in the clash have their actions cancelled.

So at the very minimum, it’s you and one other player who gets stymied (unless that one other player has the anchor, the lucky bum).  That makes it suck a little less, since it’s never just you who loses a turn, meaning you’re not losing a disproportionate amount of ground against other players (particularly in the 2-player game).  Not optimal, of course, but at least not personal.

The third thing is that if you manage to get involved in a clash 3 out of the 4 turns in a round, then you (and anyone else who did the same) get a chance to snag a Fragment from the Nexus as it resuffles during the Temporal Reset.  This can act as a great catch-up mechanism for someone who basically did nothing during the previous round…if you’re lucky enough to draw something useful.

And it is in this last bit that Entropy betrays itself to be the bluffing mind-game that it actually is.  See, because once you clash once or twice, you absolutely want to clash a third time.  So the whole game is not just about picking the best action for you, but it is trying to figure out what actions your opponents will play and either avoid them (to avoid the clash) or, deviously, intentionally clash with them, stopping their actions and hopefully getting you closer to the free draw during the Temporal Reset.

Jess:  Entropy is an action selection game and its a set-collection game, but more than anything it’s a get-inside-your-opponents’-heads kinda game.  There is a little bit of bluffing and a little bit of deduction with each play, and that really keeps things spicy.

Andrew:  True.  And that is one of the aspects of the Entropy’s design that stops it from being a real luck-fest, since fishing up the right cards from the Nexus is otherwise what the game is all about.

Our one bit of criticism of Entropy, aside from the bit about never playing it with Jess because she is a mind-reading supervillain-

-is that it isn’t nearly as good at the 2-player mark as it is with a higher player count.  While the low-player games are far more strategic (less clashes, less people mucking about with your Fragments), it also tends to be less interesting.  At 3 or 4, Entropy hums, with its simultaneous action selection keeping things snappy.  At 6, you’ll find yourself experiencing quite  a bit of chaos at the table, but it can be the fun kinda chaos, if that’s the kind of thing you like.

We think Entropy is a fantastic little filler.  With the right group and headcount, its unique take on bluffing and action selection can be really exciting and a good time for all, again, unless you are playing against your psychic spouse.

Excitingly, Rule & Make will be running a new printing of Entropy in the future, and they have told us that they are taking the opportunity to re-examine the game with all the feedback they have gotten from its two years in the wild.  No specifics have been relayed to us yet, but in the spirit of the reality-fracturing core of the game, they are taking this chance to look over every aspect of gameplay, promising to both enhance and streamline it.

In the meantime, though, we recommend Entropy as a light-weight filler for a moderate-sized group.  It is quick and agile, with just a hint of mind-games that makes it a lot of fun to play!

You can snag a copy directly from Rule & Make here!

(Thanks to Rule & Make for providing us this game for review.  Their generosity didn’t influence our opinions)