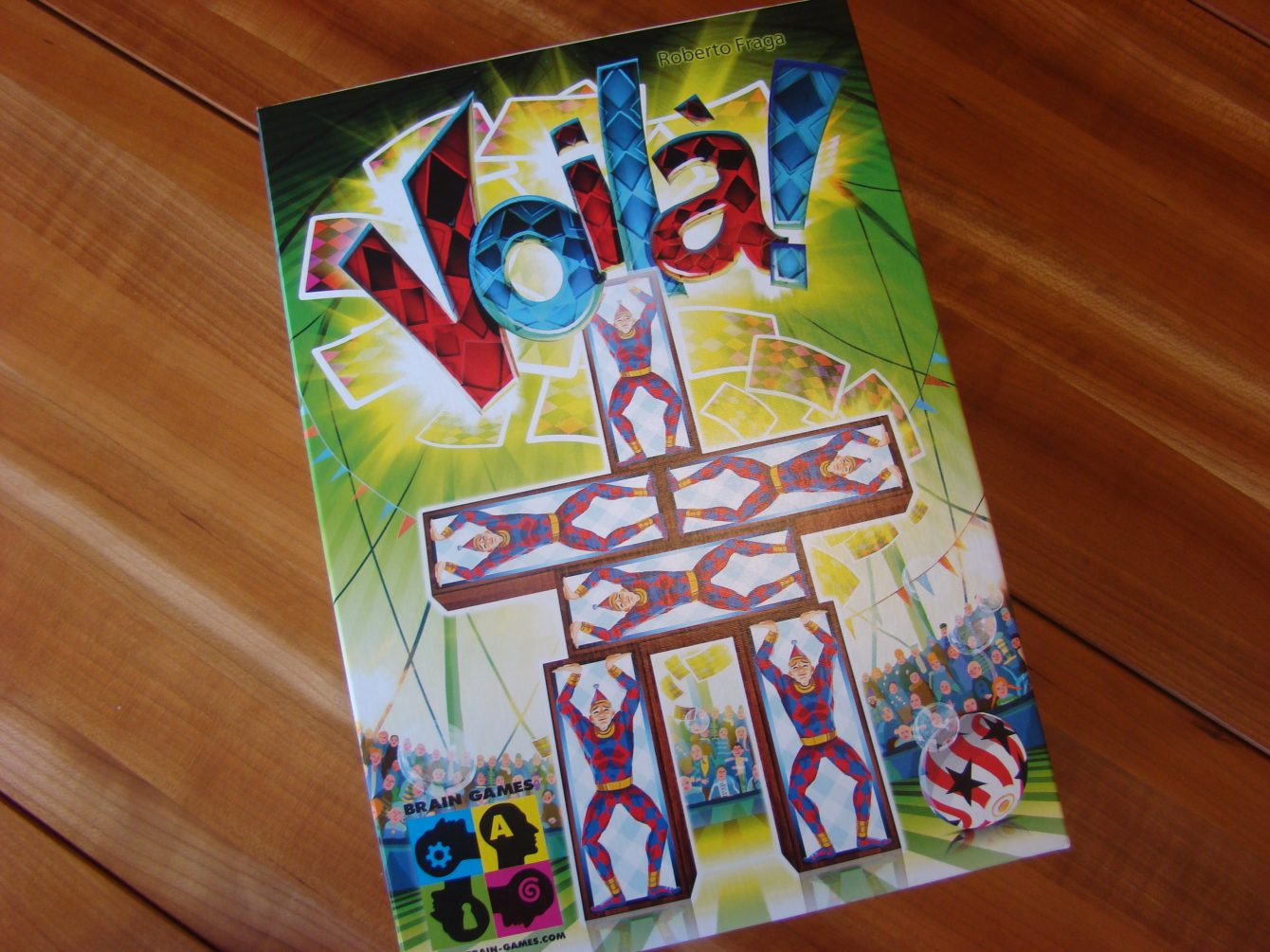 For most hobbyist boardgamers, it’s not uncommon to think about a long evening of gaming as a meal with many courses.  You might get started with an appetizer of Between Two Cites or Karuba.  Maybe some Resistance for the table.  A little No Thanks—but don’t fill up too much on the small dishes.  The main course: the centerpiece of the evening.  What do you feel like?  This is your menu of Terra Mysticas, your Trajans—or maybe your Blood Rages and your Elder Signs if you happen to prefer American.

In any case, you generally want to limit your evening to one main course.  Multiple meals at one sitting?—that’s the practice of gluttonous gourmands and libertines.  The balance of all these dishes is crucial.  Finish the evening with a shared dessert, many spoons: a big plate of Spyfall or Codenames.  Then swallow a chalky mint and get out before you overstay your welcome. 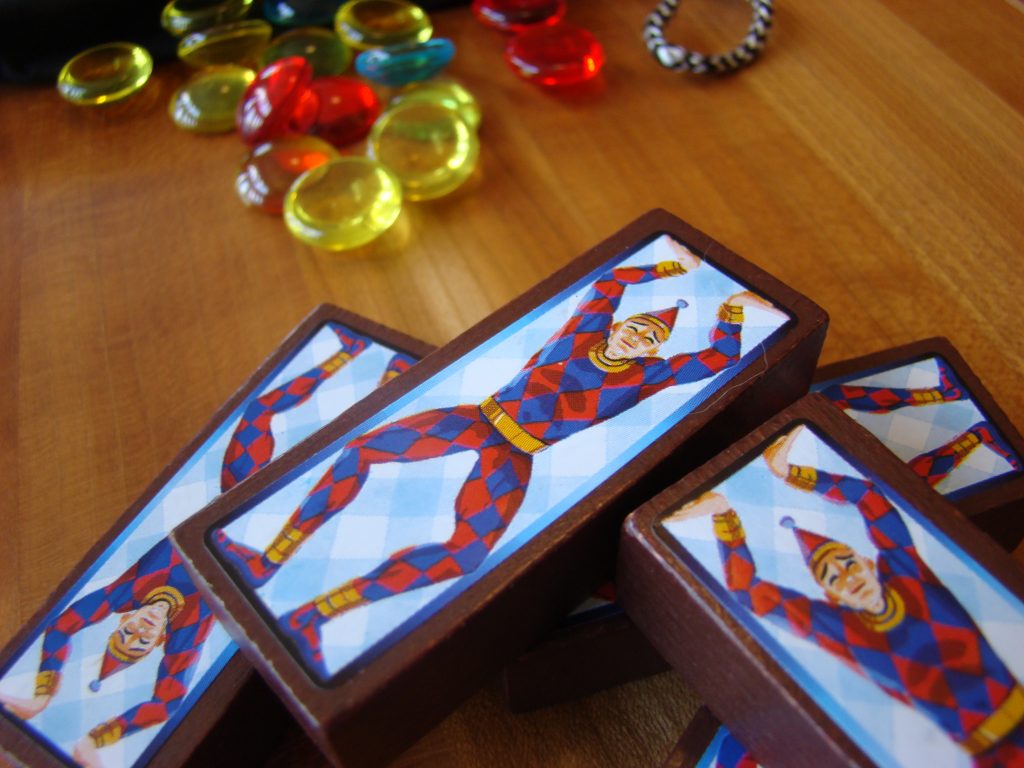 Voila, by designer Roberto Fraga and Brain Games (Om Nom Nom), is so light that it’s almost not even a game, but it occupies its own special little place in the long banquet of a gaming evening: it’s the intermezzo, the palette cleanser.  On the box, the game claims to play in 30 minutes, but it’s not even that long.  Each player has three time turns of 45 seconds each—which means that your entire game will be two minutes and fifteen seconds, and if you play at the full complement of six players, that’s not even fifteen minutes total. 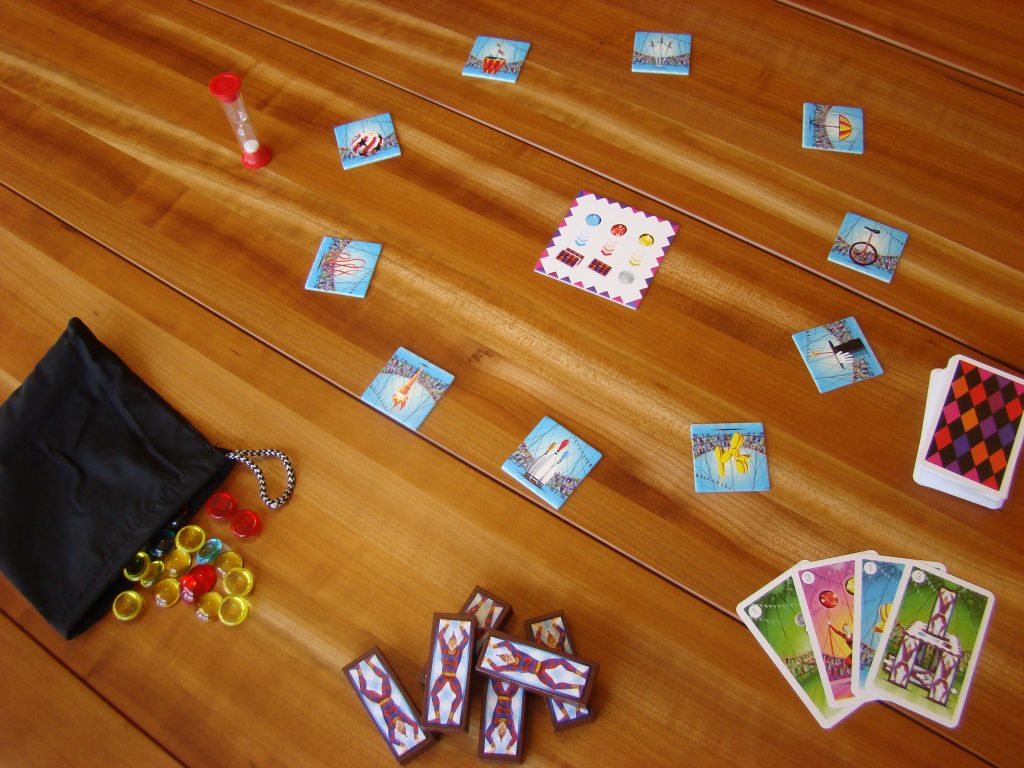 So what do you do on these brief turns?  Voila is a timed dexterity game.  You draw plastic beads out of a bag, and the color of the bead tells you what to do.  The yellow beads you just collect for end-of-turn scoring, and the red and blue beads require you to draw action cards (one and two, respectively) and take those actions before your time is up. 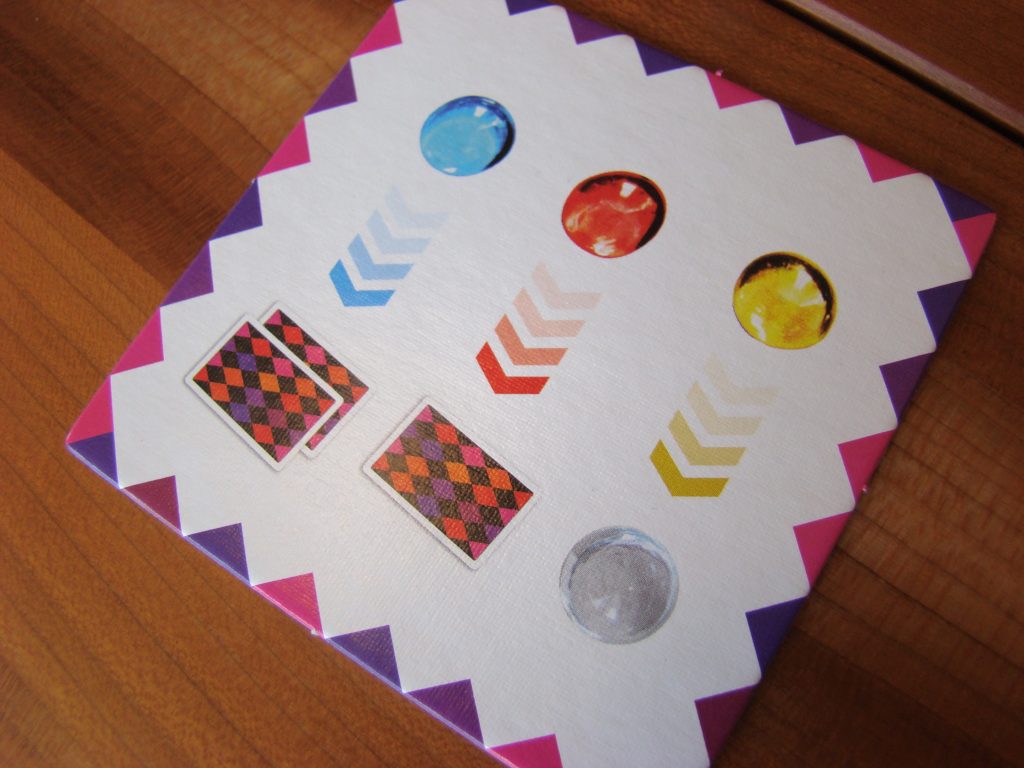 All the actions are very simple.  Sometimes it’s throwing a bead in the air and catching it in your hand.  Or quickly finding and slapping your hand on a tile before someone else does.  Or, and this is the most entertaining part, building structures out of rectangular wooden blocks (“acrobats”)—structures that may require you to incorporate tiles between the acrobats or even balance beads on top of them. 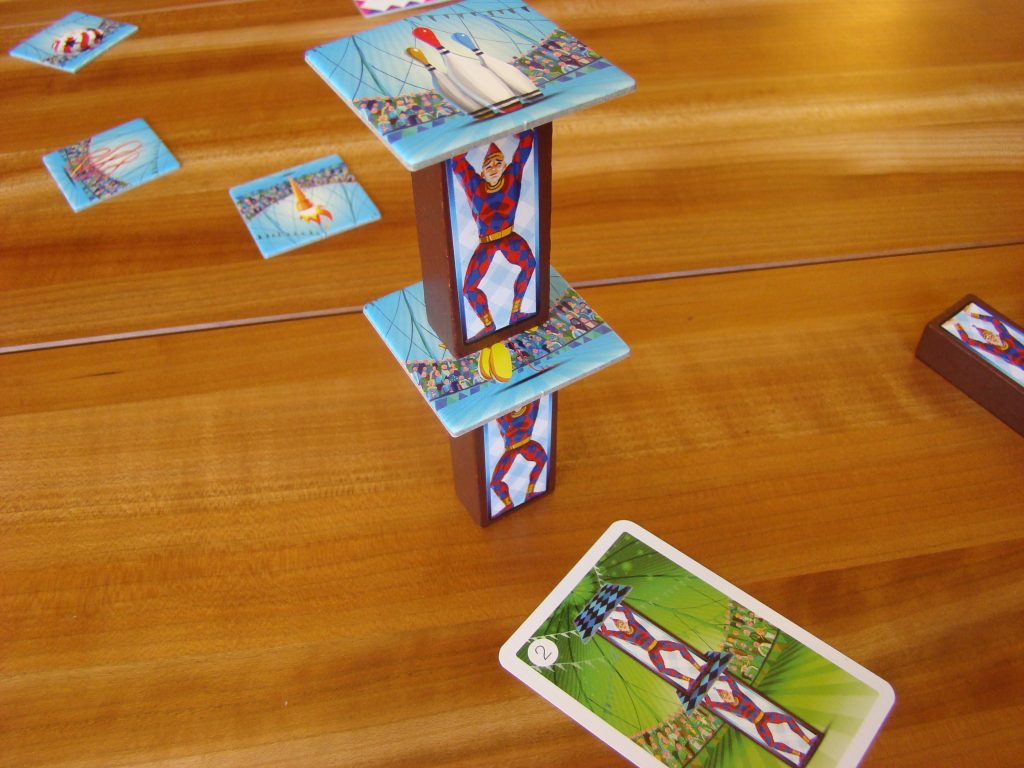 There’s also a press-your-luck element to the game, because you have to decide how many action beads to draw (and, therefore, how many actions to try to perform) in your 45-second window.  If you decide to stop drawing beads before your time is up, you declare, “Voila!”—and you get to keep the cards you’ve collected as points for the end of the game. 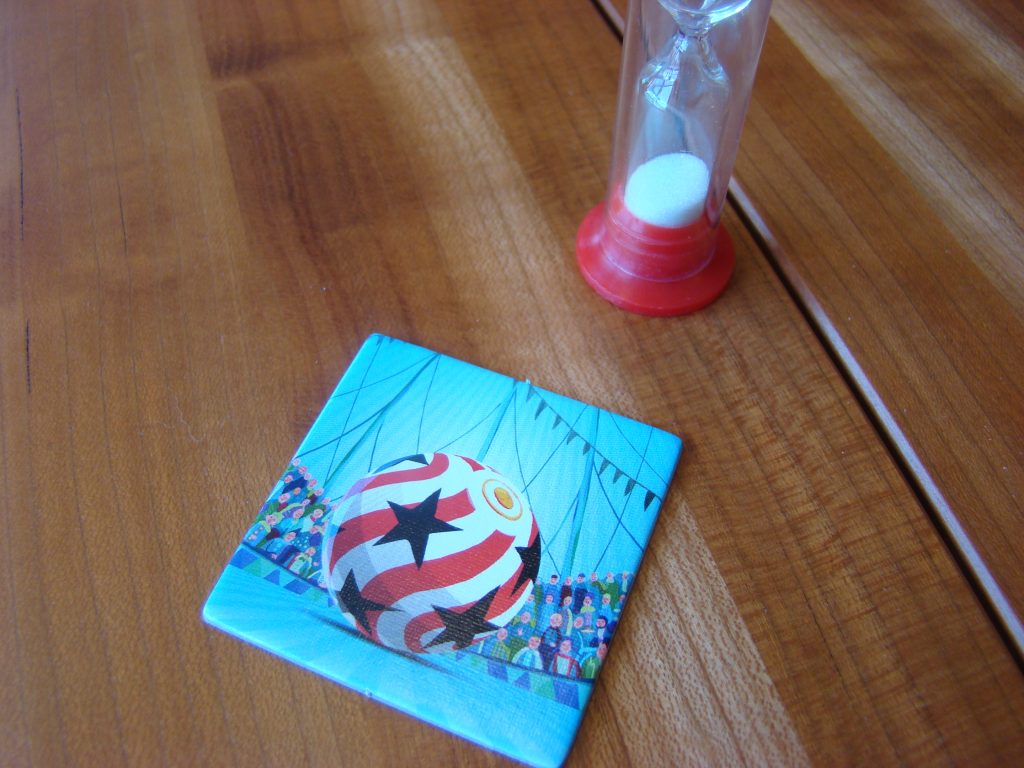 However, if you are in the middle of an uncompleted task when your time is up, you lose all your cards for that round and end up with nothing at all.  And, very cleverly, the game demands that the timer should be hidden from the active player’s sight.  In other words, as you’re frantically drawing beads, tossing them, balancing acrobats, you only have a vague sense of how much time has passed. 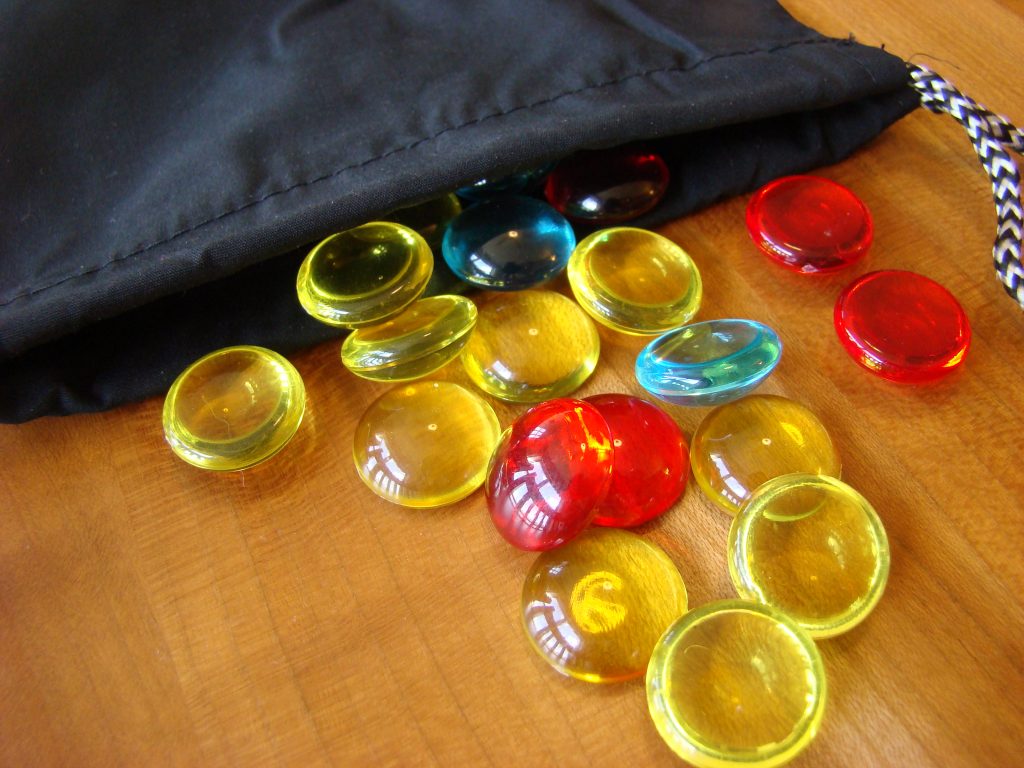 That’s where the most twitchy decisions come into play.  Say you’ve completed a couple of structures, and you’re feeling good.  You feel like you have a little time left.  Do you draw another bead?  Maybe you’ll draw a yellow bead, which gives you points for doing nothing at all.  Maybe you’ll draw a red bead that gives you one of the easier actions—you do have time to toss a bead in the air, after all. 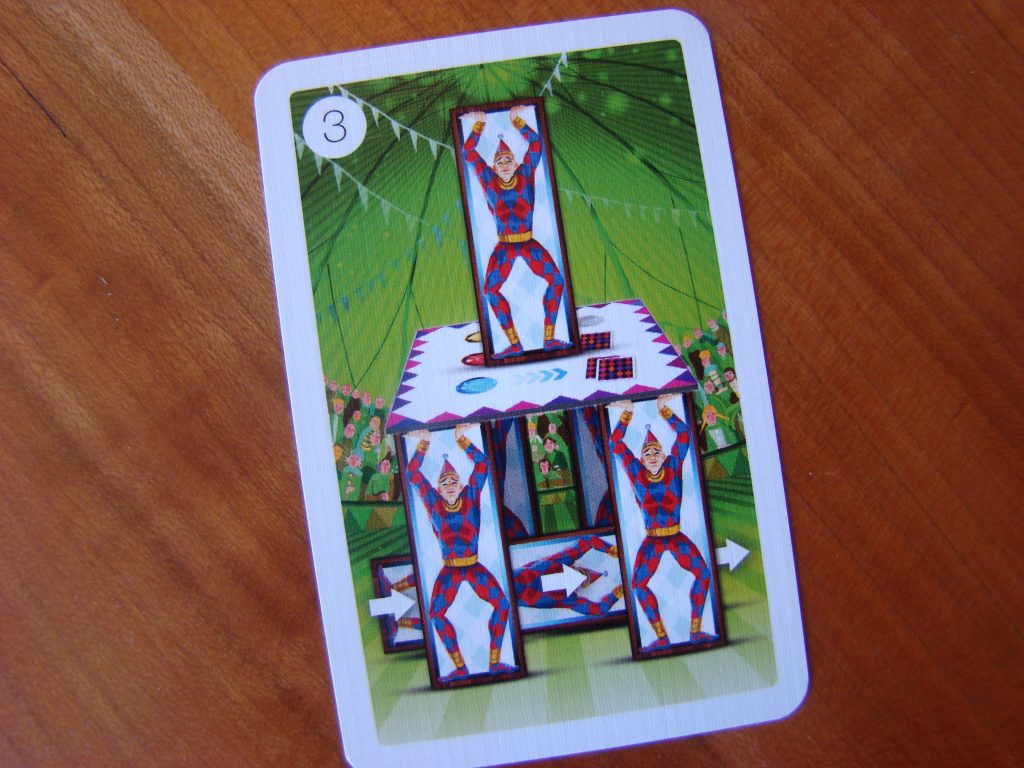 But what if you draw a blue bead that requires you to draw two actions cards, each of which has you building some wobbly tower of acrobats, or sending one acrobat under a tunnel created by the others?  Then you know you’re sunk, but that’s not going to stop you from trying to accomplish these feats with jittery, panicked hands.  That simple tower of blocks looks easy enough to build—but it’s hilariously impossible when you have an indeterminate few seconds left and all your hard-earned points are on the line. 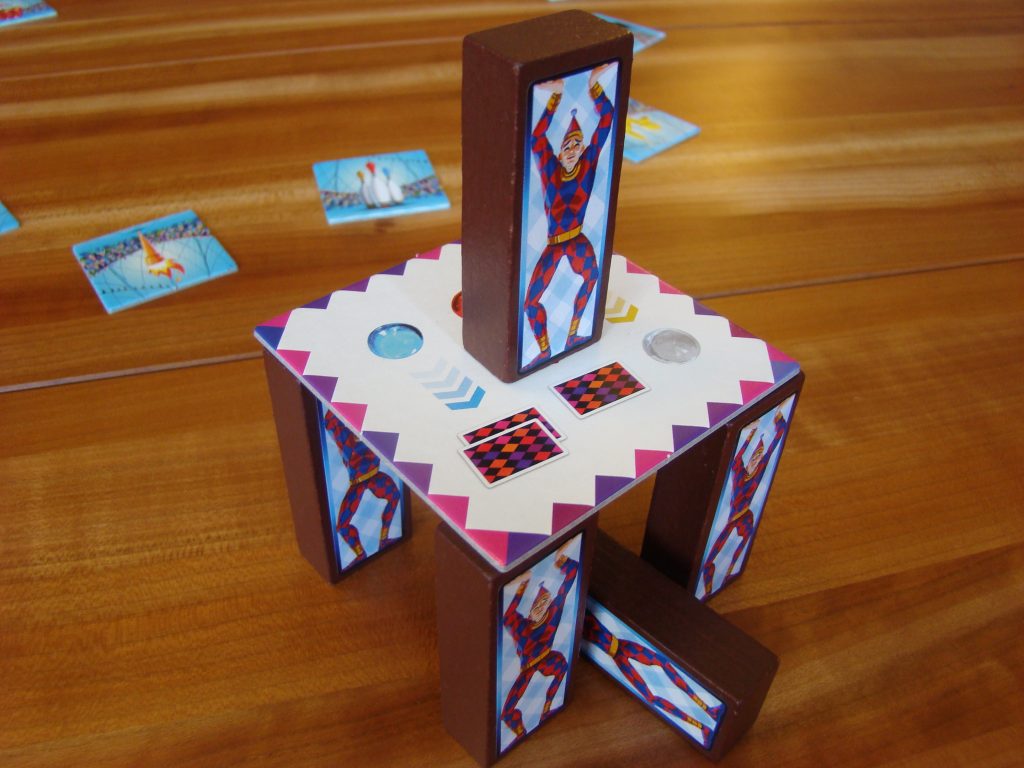 I went into Voila with low expectations.  It seemed like a nothing game, not even substantial enough for a filler—entertaining only if you’re a child and/or drunk.  But when we played it between two heavier games, I realized its true potential as a palette cleanser.  Like a scoop of sorbet or a cup of cucumber water, Voila reinvigorated us.  It was a few minutes of meaningless, physical fun. 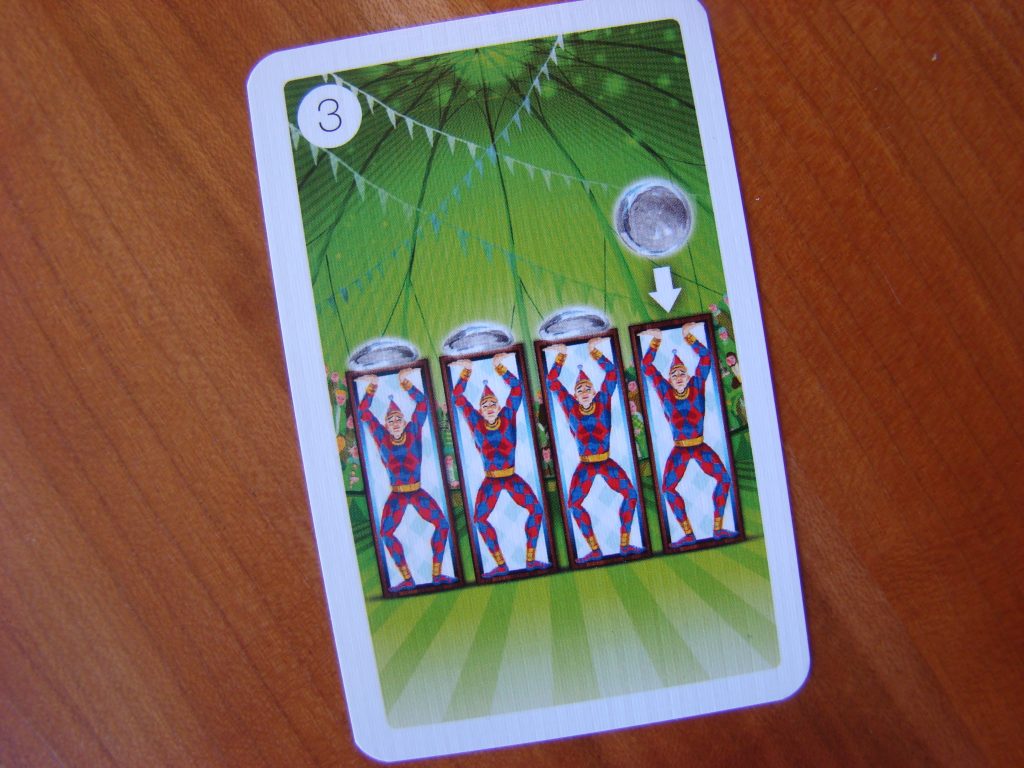 It elevated us out of that silent analytical lethargy that heavier games (with their cerebral tryptophan) sometimes inspire.  Personally, I only have one other game that occupies a similar position: Dead Man’s Draw, and even that quick luck-based card game is a bit more thinky, and bit less silly fun, and not as good with more players. 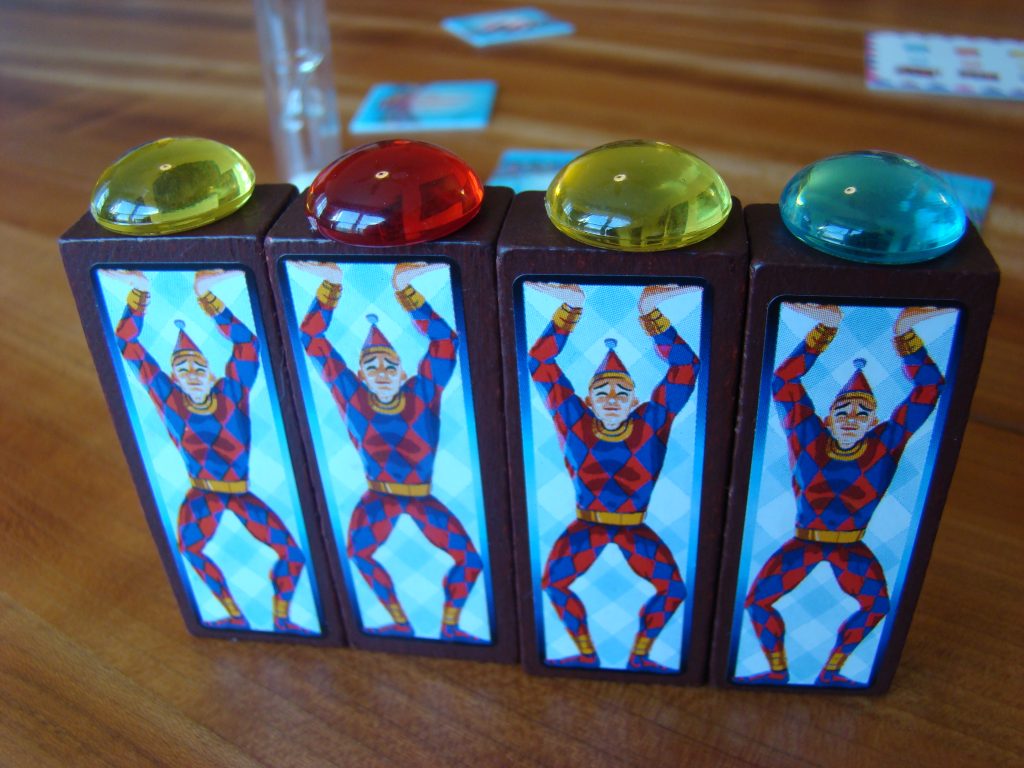 So Voila is an anomaly.  It’s an activity, perhaps, only for particular occasions, with particular groups.  Think of it as the pickled ginger of boardgames.  It’s certainly not a game for everyone—and not a game you want to play all the time—but if you pair it with the right accompaniments, if you bring it out at the perfect moment in the voluptuary arc of the evening, then it gives off just a little bit of magic.

You can order yourself a copy of Voila! here!

(Thanks to Brain Games for providing us with a review copy. Their generosity didn’t influence our opinions.)

One thought on “Voila! Review”