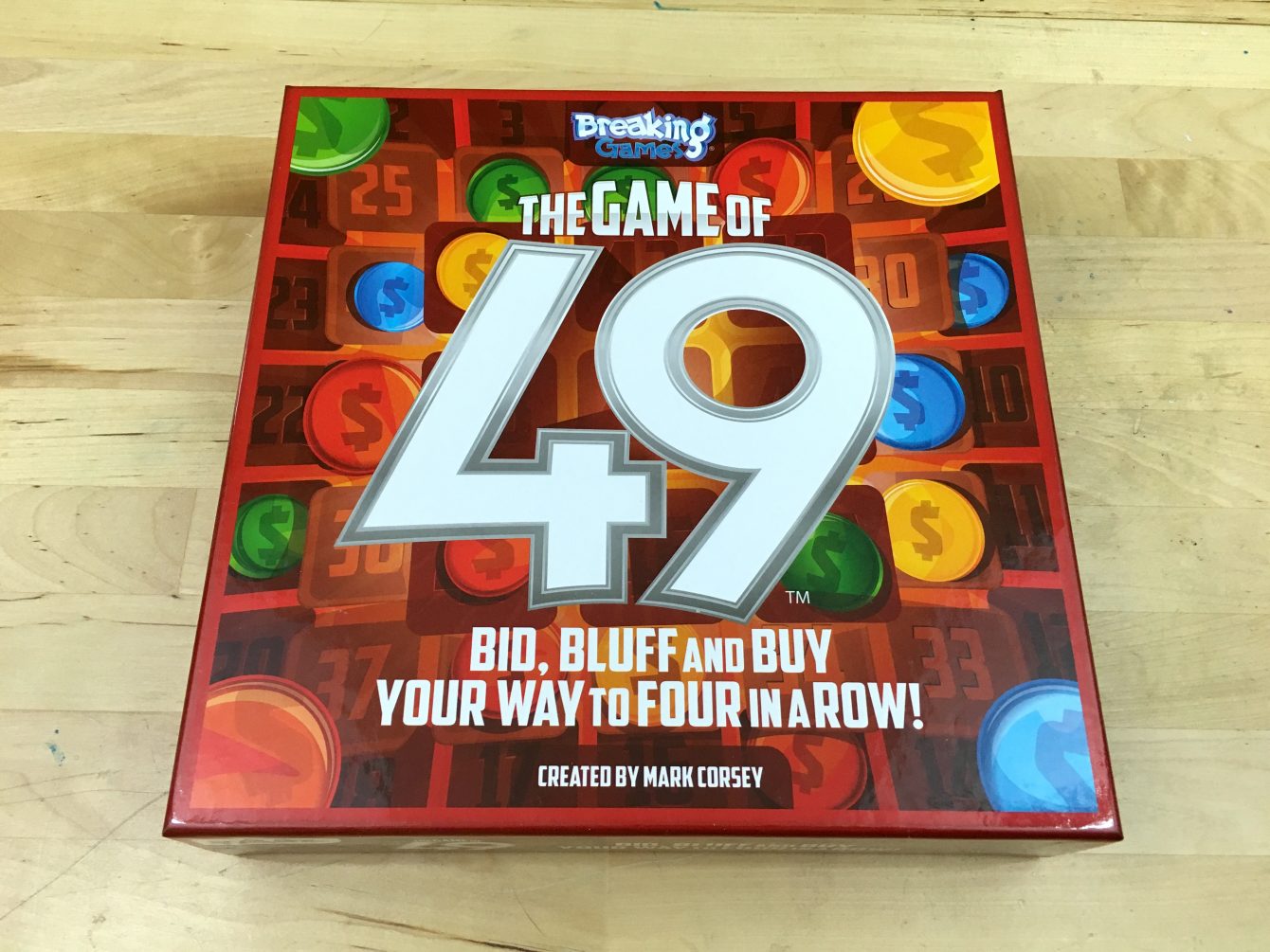 I have to admit, The Game of 49 – from designer Mark Corsey and publisher Breaking Games – was something of a surprise. I’m usually not one for competitive games that are slightly gamble-y, and it’s been quite a while since the last time I ever had the urge to play something as basic as Scrabble or Yahtzee. Even more basic, actually. Yet here I am, finding myself unexpectedly entertained by what could best be described as a hybrid of Connect Four and Bingo, with an auction element.

Sometimes board games can be weird.

The Game of 49 is all about bidding and bluffing and claiming spaces on a grid, with the first player to claim four spaces in a straight line (horizontal, vertical, or diagonal) being declared the winner. Hence the Connect Four, well, connection. The grid itself is made up of 49 squares (get it?), and players claim squares by bidding against each other every turn.

It’s quite simple in practice, really. On each turn the acting player (i.e. whoever won the last turn’s bid) flips over a card, then everyone starts throwing values out one by one. This is where the entirety of The Game of 49’s strategy comes into play, and I kind of dig it.

The wild cards also add an interesting element to the game. Not only do these cards give players the chance to claim their pick from a large selection of spaces (anything that sits within a given “ring,” as well as the coveted center 49 spot), but they’re also the only means for players to make more money. Every wild card, regardless of who wins it, will pay out various amounts of cash to each player based on how many spots they currently have claimed. Even losing an auction for a wild card can be extremely fortunate if you’re low on spending money.

First, there’s figuring out whether or not you even want to bother claiming a space. Maybe your plan involves spreading yourself out to allow for more opportunities. Maybe you want to keep your claimed spots relatively close to each other. Maybe you just don’t want an opponent to get their hands on a specific tile. Whatever the reason, it’s a crucial element to claiming victory.

Second, there’s the actual bidding. This is where The Game of 49 is at its most interesting. Aside from the starting cash that everybody is given ($49, naturally), nobody knows how much cash anyone else has in their coffers. Granted, a particularly savvy player could mentally keep track of everyone else’s spends and gains, but the average player will likely be in the dark. This means that you can never be entirely certain about being able to outbid someone else. It also means that you can mess with other players by bidding on spaces you don’t necessarily want – both as a way of taking it from them, and as a means of getting them to spend far more money than they would have otherwise.

About the only complaints I can level at The Game of 49 is that the artwork isn’t particularly interesting (it’s just numbers, numbers everywhere), and that it’s best played with a larger group. Well, I mean it only plays up to five, but definitely anything more than two is preferable. Not that it isn’t still fun with the minimum number of players, but adding even more people to the mix makes the auction even more enjoyably chaotic (and strategic), and it makes it a bit trickier to keep track of what everyone is up to.

The Game of 49 is a simple party game that gets what it means to be a simple party game. It’s extremely easy to learn, just as easy to play, and provides tons of opportunities for players to throw each other curveballs or otherwise mix things up. With a small, goofy group it’s bound to please.

Excitingly, as of this publication, The Game of 49 can also be bought at Target!

(Thanks to Breaking Games for providing our copy for review. Their generosity didn’t influence our opinions)

One thought on “The Game of 49 Review”