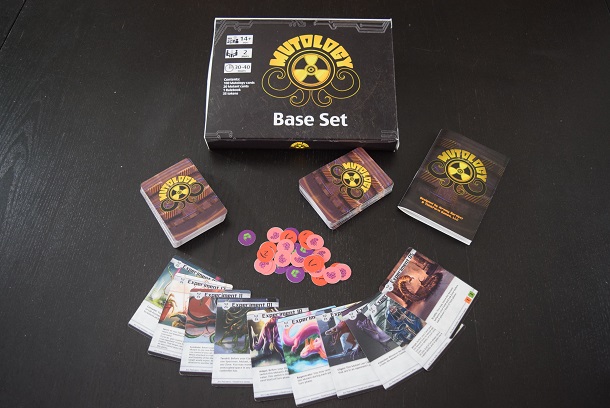 Mutology, going up on Kickstarter soon (we’ll provide links when it does), is a head-to-head card battle game and the first outing by Jeremy Bartlett & ThinkForm Games.  You and your opponent will take on the roles of Mutologists: ‘scientists’ with a dubious obsession with the recombobulation of otherwise perfectly harmless specimens into nightmarish, betentacled, fanged monstrosities, all in the name of SCIENCE!!!

Jess:  Ok, to be fair, some of these specimens start out pretty scary to begin with.  But some of them are a-DOR-able!

Each scientist will assemble their lab team, set up their equipment, and get to mutating.  Of course, all is fair in super science – with all these rampaging mutants smashing about, something is bound to get broken, and wouldn’t it just be a shame if that something was your opponent’s precious research…

**Kickstarter Preview – We were sent our copy of Mutology by ThinkForm Games ahead of their upcoming Kickstarter.  Art and rules are virtually finished, but not necessarily final!**

Andrew:  So let’s get this out of the way; Mutology has a lot of surface similarities to other card battle games.  Each of its different card types could just as easily be descibed using borrowed language from other games of the genre; specimens and are creatures, devices are artifacts, procedures are spells, etc.  But I’m happy to say that Mutology brings a flavor all its own and has a few twists on these familiar mechanics which justify its existence even in a field replete with games that appear, initially, just like it.

In the grand tradition of card battle games, each player in Mutology will arrive at the table with a preconstructed deck of exactly 45 cards (our Kickstarter preview copy came with enough cards to make 2 decks plus a few for further customization).  That 45 card limit also acts as a game timer – should you ever be out of cards, you lose immediately.

Players will take turns playing cards from their hands into their tableaus, each of which is divided into two rows, each with four spaces.  The row closer to you is your ‘Lab’ area.  Cards placed back here are safe from harm, but generally provide little or no mechanical benefit (after all, what good is an Exo Frame or a Technician if they are just sitting around your lab?).  The four positions in front of your Lab area are your ‘Field’ positions.  Cards placed (or moved) here are exposed to your opponent, but they grant much better benefits.

Decks are composed of several kinds of cards, each one costing a number of Concentration points to bring into play.  Each round, you start with a pool of 5 concentration, though many cards will affect this number.

The last kind of card in Mutology is, appropriately, the Mutant cards.  These cards are not added to your deck, but instead sit in your sideboard, waiting to be activated.  And it is in this mutation mechanic that Mutology starts to show itself to be different from other games of its ilk.

Each Specimen card has 2 distinct paths of mutation it can achieve.  By exposing a specimen to certain combinations of radiation, you will trigger their mutation into a completely new creature.  Each mutant has unique abilities and attack/defense stats, which can be further modified by radiation and equipment cards.

Andrew:  This is the heart of Mutology, right here; getting the right combination of radiation cards and speed-injecting them into some hapless little creature to generate just the right kind of monstrosity is incredibly satisfying.

Jess:  Yeah, and I really like how each specimen can mutate 2 different ways – it means that, as long as I have the right cards, I can mutate a specimen to fit my current strategy, or to give me some cool advantage.  It’s a really neat mechanic.

Andrew:  Totally.  Of course, as in any other game like this, if you run low on Radiation cards, your specimens will sit there being adorable instead of, you know, useful, but that’s why building an effective deck is key.

The ultimate goal of Mutology is to accrue 5 Research Points, thereby proving your science to be superior and winning the game.  At the beginning of each turn, you will score a single Research point for each mutant in your Field zone – so, in theory, all you have to do is mutate a single specimen, stick it in the field, and wait five turns for your inevitable victory.  Easy, right?  Well, we did mention that Mutants have attack/defense stats, and your opponent might not be cool with you cruising your wait to an easy win.

Each turn, Mutants in the field can initiate ‘clashes’ with cards in your opponent’s field.  This combat is extremely straightforward, with attackers and defenders simply dealing their damage to each other simultaneously, with anyone taking lethal damage getting removed from the field.  And mutants can attack any card in the opposing field, not just other mutants, so it is entirely possible for your opponent to smash that Force Field generator you built or unceremoniously kill your precious lab techs…of course, you can do that right back.

Andrew:  Mutology is a game that I feel is packed with potential.  The art is fantastic, the theme is interesting, and I like how it plays.  It’s not without its nit-picks, though.

Firstly, winning the game means needing Mutants.  And that means you need Specimen cards, and the right combination of Radiation to mutate them.  The games we played often ended up with players having more specimen cards than radiation, meaning that most of the time there was little for those critters to do, aside from get unceremoniously slaughtered.  Of course, that’s a deck construction challenge, and hopefully one which the final version of the game will work to eliminate.

Another issue we had was that an early lead was a huge advantage.  Since only Mutants can initiate clashes, if a player managed to spawn one before their opponent, it was always a race to mutate an appropriately powerful mutant to kill off your opponent’s victory point machine.  And if the cards were against you (you didn’t have the right radiation, for example), that could take several turns, leaving you potentially uncrecoverably behind on VP.

Finally, games like this are often dependent on expansions for added replayability – the cards in this base game are neat and functional, but it will only be a matter of time before you have played all the combinations that Mutology offers as-is.  It is important to note that ThinkForm Games is treating this as an ‘expandable’ card game, rather than a collectible one – after this Kickstarter (and depending on its success), there will hopefully be expansions which will add cards, but no randomness in which cards you get.

Jess:  Despite all that, we are really excited to see the Mutology Kickstarter go live soon.  It’s true, there are a lot of head-to-head card games out there, but this one has a really cool theme and some truly unique mechanics, which we think have the potential to merge into a monster of a game.

We will post up links to the Mutology Kickstarter as soon as it goes up!