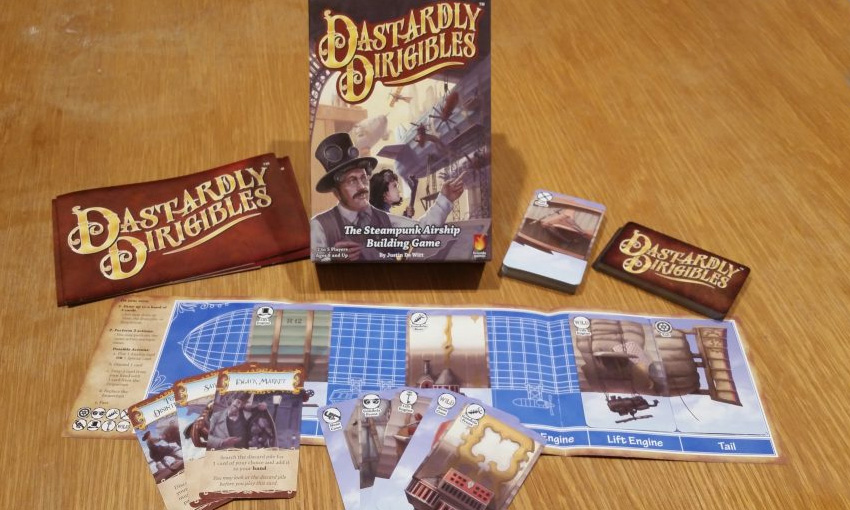 As everyone knows, airships are the only civilized way to travel.  From the tip of my tophat to the cap on my cane, it always gives me a thrill to step up onto the gantry and take my place on one of Professor Phineas Edmund Hornswaggle’s top-quality flying machines.  Which is why it breaks my heart to hear that the illustrious professor is retiring.

Jess:  Egad!  But who will run Hornswaggle Industries?

Andrew:  An excellent question – it seems the Professor has put out a call to all the best dirigible designers.  Whomsoever can design the finest airship will inherit his…what are all those scrolls?  Where are you going?

Jess:  Assembling my designs, of course.  I say, don’t be such a gongoozler, my dear.  See you at the factory!

Dastardly Dirigibles is a set collection game from Justin De Witt and Fireside Games.  In it, 2-5 players will compete to see who can assemble the best of the titular dirigibles in an attempt to score the most points over the course of three rounds, all the while attempting to avoid the dastardliness of their fellow designers (and, very likely, committing a bit of it themselves).

Gameplay is simple enough for even a gormless fopdoodle to comprehend (the game comes with a list of Victorian insults, in case you hadn’t caught on to the theme).

Each player will have a planning board (‘board’ might be overstating, but more on that shortly), as well as a hand of cards.  These cards are either Airship cards, which comprise the various segments of dirigible they are building, or Special cards, which each have some variable (often Dastardly) effect.  On every turn, players will draw up to their hand of 5 cards (either from the face-down deck or the face-up cards in the Emporium), and then take 3 actions.

Now, each player is trying to complete their own airship by placing Airship cards.  These cards come in 7 different segments, as well as 7 suits (plus wilds).  The most valuable airships are assembled from parts from the same suit, so would-be designers will swap, draw, and occasionally steal cards in an attempt to get the most of one particular suit into their airship design.

Andrew:  Now, here’s where things get a whole lot more dastardly.  Because whenever one player places an airship segment, like a drive engine, for example, each other player must place the same card type into their own airship immediately, even if it means discarding a card they already have in place.  Even if it means getting rid of a card they oh-so-want to leave where it is.

This, clearly, has some…strategic implications.  For instance, you could make sure your placements are designed to disrupt the beautiful airships your opponents are building, or you can capitalize on your opponent’s placement to let you add cards to your own ship off-turn.  The only way to avoid being forced into placing a segment card is if you don’t have that exact segment in your hand when called on to place it.  So cannily discarding cards you would rather not place is also an important strategy.

Jess:  Of course, since players’ hands are hidden information, there is no way of really ensuring that someone doesn’t have the part they claim to be missing, but the way we see it, it’s on you for having befriended a perfidious rampallian in the first place!

The game continues this way until one person manages to place a card in each of the 7 segments of their planning board, completing their airship.  This ends the round immediately, and players score based on the most common suit of airship part in their ship (even incomplete ships still score).  After three rounds, the points are tallied up and a winner is declared.

Andrew:  I really like Dastardly Dirigibles.  For such a simple premise, it has a lot going on, and provides a good dose of chaotic fillery fun.  At two players, it is a pretty strategic game, and at 4 or 5, it is madder than a bag of ferrets, with airship parts getting stripped and replaced almost constantly.  Both are good time!

We did have one or two little complaints about the physical production of the game.  The player mats are neither card stock nor proper boards – instead, Fireside has gone with thin plastic sheets that don’t ever quite unfold perfectly, but are otherwise quite serviceable and attractive.  The cards are similarly just a little thin and sorta cheap-feeling, which is a shame because we like the art in the game a great deal.  Everything in the box is fine, production-wise, but it feels like it could have been better, because Dastardly Dirigibles is a really fun little game and we would have liked to see it get a slightly more deluxe treatment; but then again, it’s also not a budget-breaker, likely for these exact reasons.

These minor complaints aside, we had a lot of fun with Dastardly Dirigibles.  It is the kind of filler game that is easy to teach and can be played quite quickly, and despite being a trixy game, doesn’t feel too attacky or aggressive.  It strikes a nice balance of interaction and then is over long before it has overstayed its welcome (that 1 hour gameplay estimate on the box is rubbish).

Dastardly Dirigibles is out as of today!

(Thanks to Fireside Games for providing our review copy.  Their generosity didn’t influence our opinions,)