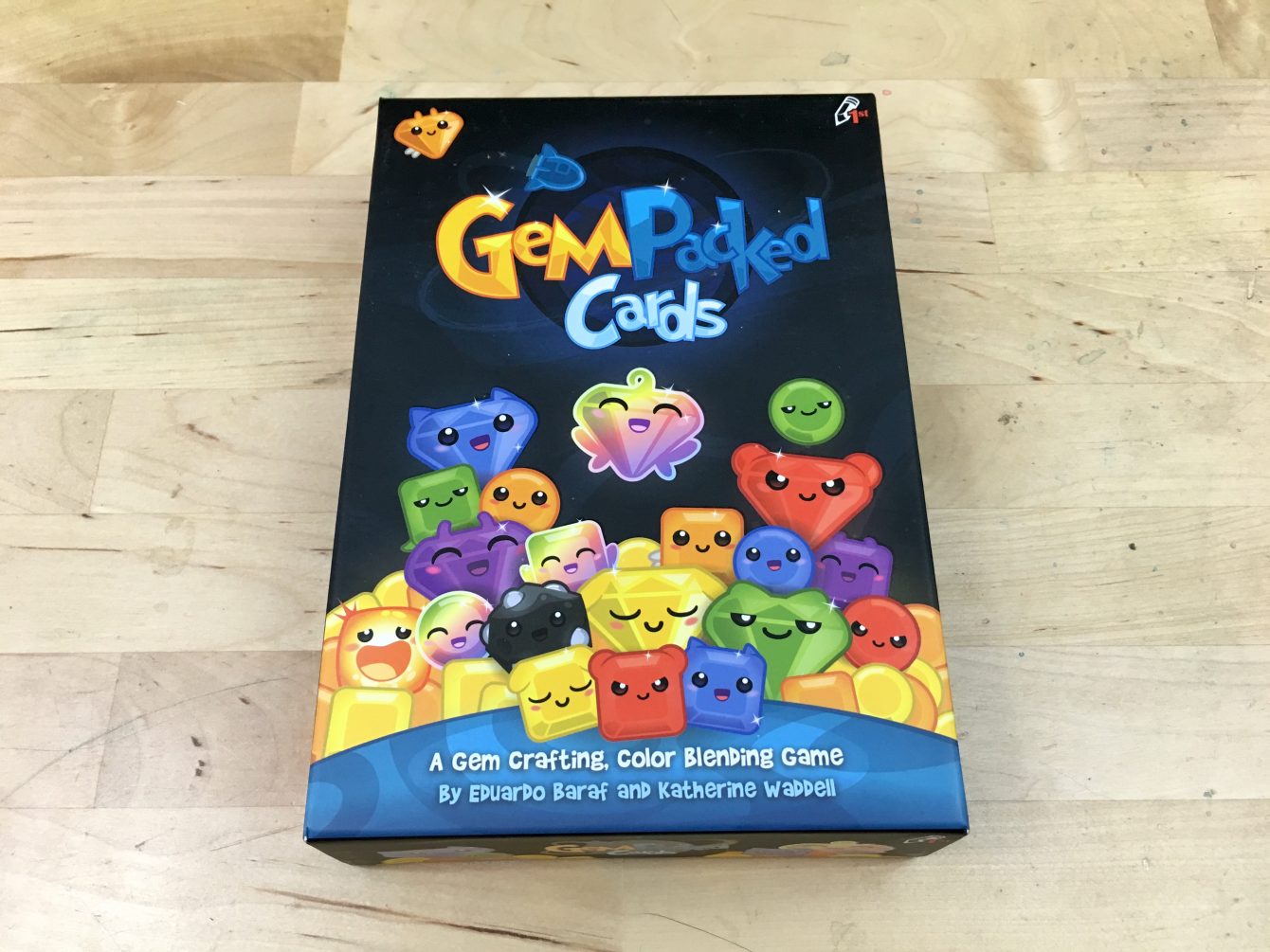 Gem Packed Cards, from designer Eduardo Baraf and publisher Pencil First Games, is a bit difficult to pin down. Not because it defies genre conventions or is packed with never-before-seen ideas, but because we’ve all had a tough time figuring out how we feel about it – and why we feel that way. I think Diana probably said it best after our last game:

Diana: Every time we play, I feel like we’re somehow missing an important rule that would make the game fun.

There’s nothing inherently wrong with Gem Packed Cards. It’s a colorful game with some incredibly cute-looking gem illustrations (from artist Katherine Waddell) that, both visually and mechanically, seems like it’d be ideal for a younger crowd. The thing is, unlike some other ‘younger’ games we’ve played and reviewed, that appeal somehow didn’t extend to us. To put it plainly, it’s just too simple.

Rob: What really drives me nuts is how there’s nothing actually wrong with this game. It’s easy to grasp, and the idea of trading your not so great gems for better gems is totally fine on paper.

Again, on paper it’s a perfectly sound idea. Players start by collecting a few small, comparably worthless gems from a shared pile on each turn. Then they can potentially swap those mediocre gems for much better (and more valuable) ones at different exchange rates. So two small greens (or one blue and one yellow, because color mixing!) can be traded for a larger green, and two larger greens can be traded for a much larger green.

A couple of additional wrinkles in the formula include sun, red dwarf, and nova cards that can be bought for varying quantities of gems for extra points, as well as “rocket cards” that act as additional goals players can complete for even more points. I know, all of this sounds absolutely fine in concept. Heck, it even sounds kinda fun!…In practice, though, we found it a little tedious.

Rob: Why? Why don’t we have fun playing this game? All the pieces are there! Set collecting, commodity exchanges, bonus challenges, high-quality production, great art…What are we missing??

Diana: I don’t think we’re missing anything.  I think this one may just have missed us.

Diana: Well, one thing that does bug me is how pointless the rocket/challenge cards seem. The game ends so fast there’s usually not enough time to complete any of them. And even if you do, they usually only give you a few more points than the total value of the gems you’d be trading for them.

Rob: That’s true. And now that I’m thinking about it, weren’t you saying that our last game felt like it ended way too soon?

Diana: Yeah, for sure.  It’s like, by the time either of us had a decent pile of non-worthless gems and could start making better trades, the game was over.

Despite our collective indifference to it, Gem Packed Cards isn’t a bad game by any stretch of the imagination. It’s just not a particularly interesting one – which is a real shame because it has the building blocks of a really fun, light little game.

We could see a group of young players who aren’t accustomed to more complex mechanics or strategies having a good time with it, however, so even though it doesn’t necessarily have a place in our collection, it could certainly act as a primer game for young players or non-gamers.  They may quickly move on to more complex fodder, but that doesn’t mean Gem Packed Cards isn’t worthwhile…it’s just not for us.

(Thanks to Pencil First Games for giving us our copy for review. Their generosity didn’t influence our opinion)

One thought on “GemPacked Cards Review”