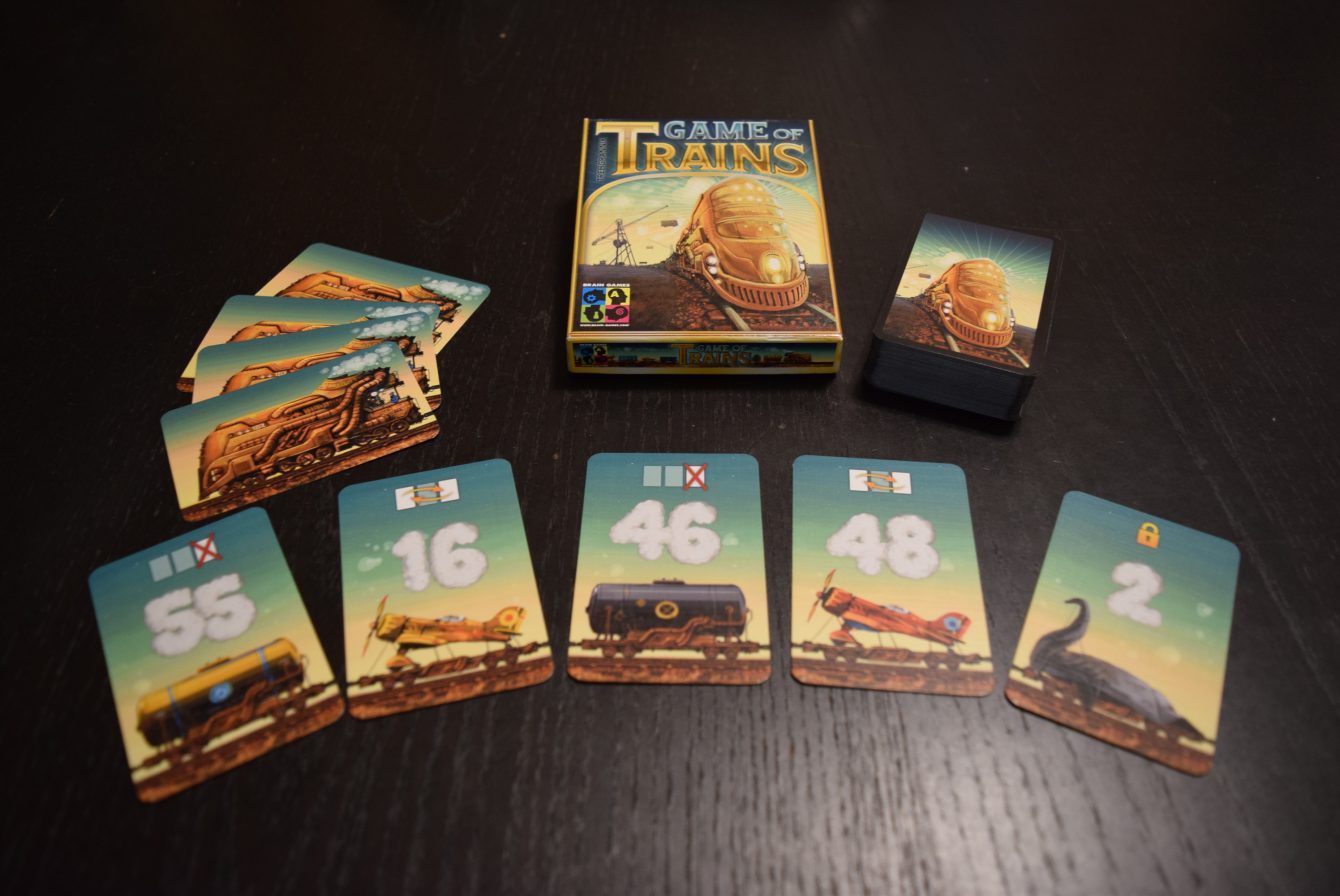 Game of Trains, designed by Alexey Konnov, Alexey Paltsev, and Anatoliy Shklyarov and produced by Brain Games (Om Nom Nom, Voila!), is a deceptively simple game.  Within this small box is naught by a deck of cards, numbered 1 – 88, and starting cards for each of the four players.  Your goal in Game of Trains is to arrange your train cars in ascending numerical order, which is complicated by the fact that your 7-card train will always start with its cars in descending numerical order.

Jess:  So, wait, if the train is already arranged in descending order, why don’t we just stick the locomotive on the other end?

Anyway, merciless applications of logic aside, Game of Trains is a sublimely simple game.  On your turn, you will either draw a card from the deck, adding it anywhere into your train by replacing one car (and discarding the replaced car face-up into the center area), or you will claim one of the face-up cards in the center, not for its value, but for its special icon.

Andrew:  See, each card in Game of Trains has one of six icons, each of which helps you manipulate the cards in your train.

Jess:  Do any of them reverse the direction of the train, letting you win immediately?

Andrew:  And that’s it.  Each turn, you will either activate an ability or draw a card and swap it into your train, turning the card you discard into a symbol that can be activated on any subsequent turn.  First player who gets their train in order wins.

Jess:  All kidding aside, Game of Trains is a great little filler.  It’s super compact (just a 2-piece box), takes up very little table-space, and it plays quick and fun.

Andrew:  Absolutely.  It’s totally abstract, of course, just a card-manipulation race, but the art by Reinis Petersons is just fantastic, and there are about a dozen subtle cameos and references, ranging from the A-Team to Game of Thrones hidden amidst the cards.

We think Game of Trains is fantastic.  If you’ve got room in your collection for an abstract little filler with absolutely awesome art, then you should totally check it out!

(Thanks to Brain Games for providing us with a review copy.  Their generosity didn’t influence our review)