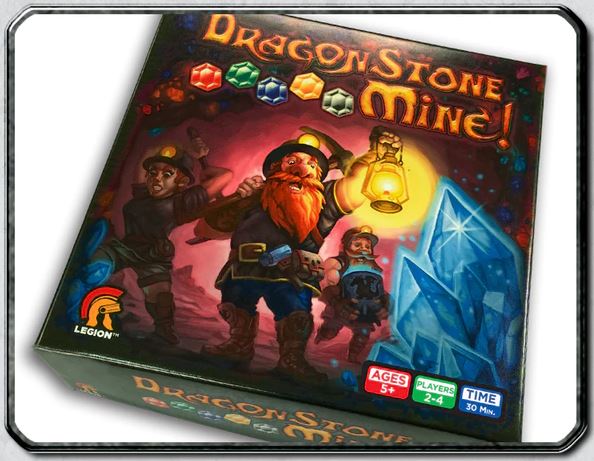 DragonStone Mine! is a game on Kickstarter right now, might be a game you’d be tempted to dismiss as gimicky; on the table, it is all colorful bits and some spoked wooden blocks, with naught but a few miniature cards to denote it as a ‘game’ rather than a ‘toy’ – but don’t take its unique appearance as a negative.

**Kickstarter Prototype Alert! – This is a preview copy Legion sent to us for this article.  The final bits will look way nicer!**

Designer Scott Elliott has crafted something that may look like it could be a toy, but what he and publisher Legion have created is actually a very light, very family-friendly set-collection game with a unique look and just enough tactical bite to keep adults playing right alongside the kids.

DragonsStone Mine! (which is clever, because it is about mining for DragonStones and also about making those stones Mine, All Mine!) is a simple, accessible game for 2-6 players, though we found the sweet spot to be somewhere in the 3-5 range.  In order to give players some flexibility in rules complexity, it comes with 3 different levels of play, each one getting progressively more complex (the first level, for example, is appropriate for kids who aren’t even reading yet).

Andrew:  Our rules summary will be for the most complex ‘Level 2’ ruleset, since we are all readers around here, but we did really appreciate the inclusion of a scaling system for younger or less experienced gamers.

Each player will start out with one of the neat little custom peg stands; these stands are the bases on which you will build your DragonStone towers.  Some cards are laid out and all the gem-bits are placed in the bag.  Then, after grabbing some initial cards and gems, turns begin, starting with the youngest player.

The goal of the game is to be the one with the most points at the end, and points are gotten in several ways.  There are 5 gem colors and each tower you build is 5 gems tall – at the end of the game, you will get points for every gem you have collected.  Bonus points are awarded for towers composed of single colors, or of each of the 5 colors.

On your turn, you will mine a gem from the bag (randomly).  Each of the 5 colors of gem has a unique effect that triggers as soon as it is drawn:

Andrew:  So, as you can see, there is actually a bit of strategy to be had here.  While it is true that the game is very random – those gem draws are everything – being smart about building your own stacks isn’t the only thing that matters in DragonStone Mine!; you also need to tactically disrupt your opponents’ towers with off-color or duplicate gems, because those rainbow and single-color bonus points are huge.

Jess:  And don’t forget the cards!

In addition to the stacking rules for the various colors, the Level 2 game makes use of action cards which players can draw.  These cards have powerful effects – some are useful simply for drawing huge numbers of gems, while others let you steal from and manipulate your opponents’ stacks. 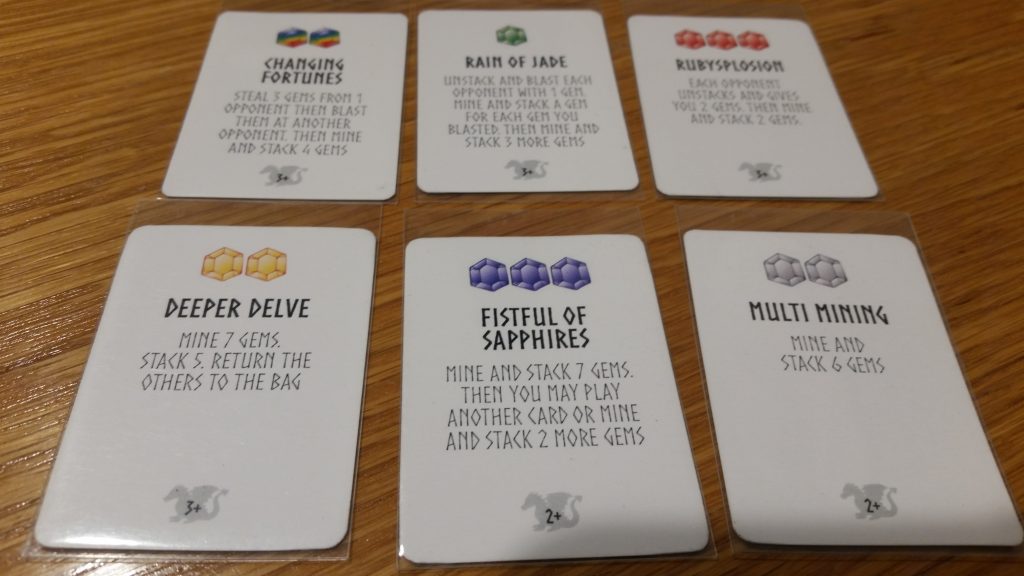 Andrew:  And, really interestingly, you pay for these cards by drawing gems from your own towers!  These spells use your victory points as fuel!

Jess:  Yeah, which may seem lousy at first, but they also give you the chance to remove unwelcome off-colors from your stacks, letting you manipulate your own towers even as you mess with the rest of the table!  It’s no deep strategy game, but it’s just thinky enough to keep people interested even beyond just making pretty piles of bits.

DragonStone Mine! is decidedly a family game – with young kids, the simple rules are perfectly adequate.  However, once you hit Level 1 and Level 2, things get interesting enough that we are sure parents will enjoy playing the game with their little ones, and it even acts as a nice filler for more experienced gamers.

The Kickstarter for DragonStone Mine! has 4 days left and they have successfully hit their funding goal!  You can click this link to check them out now!

(Thanks to Legion for providing our prototype.  Their generosity didn’t influence our opinions.)