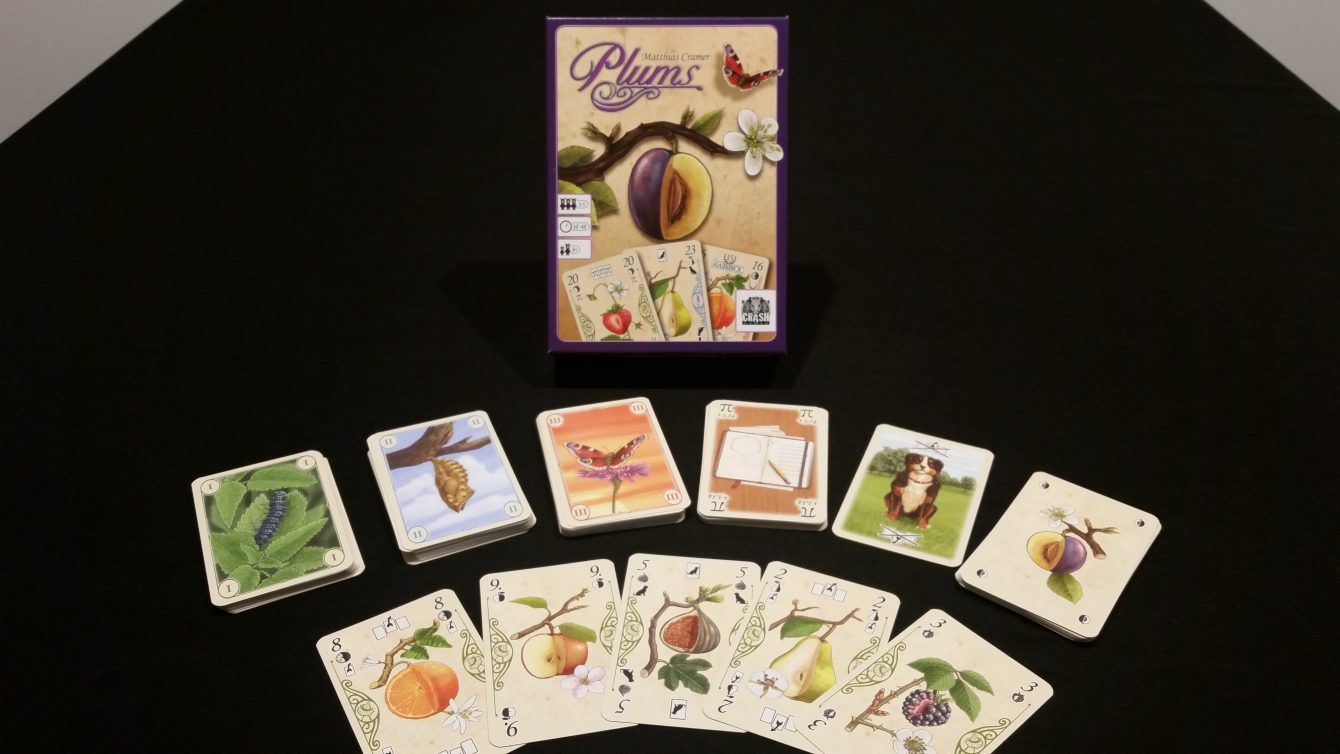 Plums, or Pi Mal Pflaumen (as it was originally titled) is a beautiful trick taking game from designer Matthias Cramer and publisher Crash of Games (Backyard Builders Treehouse).  With a refined aesthetic, easy-to-grasp rules, and a snappy playtime, this small-box game for 3-5 players might at first look like a delicious fruit-filled filler, but is there enough caloric content to make Plums a meal on its own?

Plums (I’m going to keep using the current title, because despite the linguistic beauty of the original, it’s, like, 8 extra characters) is a fairly pure trick-taking game with some set collection elements.  In some ways, it’s simpler than most – there are no suits to be concerned with, and games will rarely last 30 minutes.  Played over the course of 3 rounds (each round consisting of 6 tricks), players aim to collect sets of gorgeous fruit cards in order to score points.

On every turn, each player will play a single card.  Whoever played the highest-value card becomes the lead player, and picks one of the played cards to add to their tableau.  Each other player, in order of the card they played, does then does the same.  The last player to pick up a card, in compensation for not getting a choice, gets a plum, which acts simply as another kind of fruit.

As players pick up cards, they can complete ‘Fruit Mixes’ by discarding the appropriate combinations of cards, as shown below.

In addition to the Fruit Mix symbols, cards can have one of three other symbols, which activate as soon as the card is taken (not when it is played):

Andrew:  Plums has a lot going for it.  It is a simple game, with absolutely beautiful components and a quick playtime.

Jess:  Yeah, the artwork is lovely – Dennis Lohausen manages to make everything look like scientific sketches in this very painterly way – its really beautiful, and fun to play, too!

Josh:  I think it only masquerades as a simple game – Plums may be quick, but it has some unique twists – like how in order to make a fruit mix, you need not only the right combination of fruit but the mix card itself – and the only way you can get a card is by claiming it from a trick.  That means that if you are holding the card you want to score, you need to risk putting it on the table before you can claim it, and there is always the chance someone else will take it instead of you.

Andrew:  Right!  There is a unique timing element to when to play your cards – it’s not just about when you want to ‘win’ a trick by going first, because sometimes you want to come in last, to get those sweet bonus plums.

Our one substantive criticism of Plums is that we don’t like the ‘steal’ mechanic – it’s bad enough when someone snags the card you wanted during the trick, but to then have one of your precious fruit cards stolen just feels frustrating.  The dog offers protection, but it is capricious, following whomever took a Dog card last, and it only serves to ensure that one player is protected, at the expense of the rest (this is particularly acute in a 3-player game).  And if you are the lead player in a trick that has a Steal card and you don’t take it, there is no reason why a subsequent player couldn’t take that card, and then take whatever you had claimed.  It is a mechanical nuisance in an otherwise cleanly-designed game that we really wish wasn’t there.

That aside, we think Plums is excellent all around.  Despite its shallow footprint and short playtime, it is just strategic enough to elevate it past ‘filler’ status, and it never overstays its welcome – a great trick taker for nearly any gaming group.

You can pre-order Plums directly from Crash of Games, and it will officially release July 27th!

(Thanks to Crash of Games for providing our review copy.  Their generosity didn’t influence our opinions.)

2 thoughts on “Plums Review – A Real Peach Of A Game”