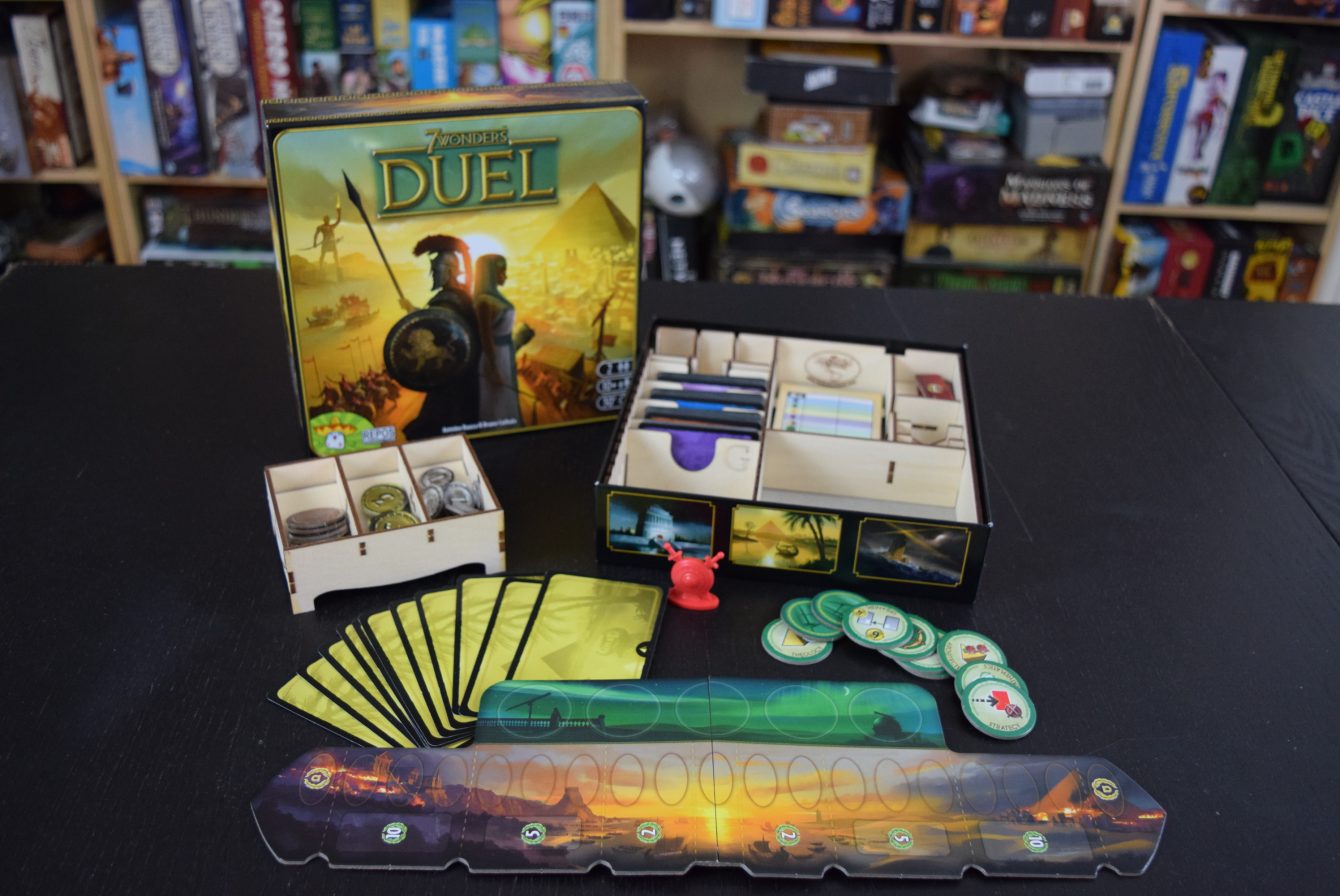 For the uninitiated, 7 Wonders, from the brilliant Antoine Bauza and published by Asmodee, is among our favorite city building card drafting games.  Since its initial publication in 2010, 7 Wonders’ unique take on resource management and tableau building have kept it relevant and playable (for lots of us, anyway), especially with all the excellent expansions that have come along.  It is a fast game (notoriously taking three times as long to explain as it does to play), and plays spectacularly well at any level of its wide player count, from 2 to 7 players…

Andrew:  Except the 2 player game is crap.  Instead of managing your own city-state, you and your opponent will take turns managing both your own and a phantom 3rd player’s board.  It’s annoying, it’s cumbersome, and it robs 7 Wonders of its brevity, one of its best attributes.

Fortunately, this weakness in an otherwise excellent game was clearly something that designer Bauza understood.  And from his collaboration with Bruno Cathala, another industry great, we get the 2-player only 7 Wonders: Duel.  Does it succeed in delivering the same tableau-building pleasure of the original?

Jess:  Absolutely!  Comparisons to 7 Wonders are unavoidable, but Duel really stands up on its own, too.

Andrew:  Now, for the sake of the rest of this review, we will assume players aren’t familiar with 7 Wonders already.  However, if you are, then you already have all the vocabulary you need to dive right in to Duel, though there are differences you will need to keep in mind.

In 7 Wonders: Duel, both players are trying to build the most successful cityscape.  They will do this over the course of three rounds of card drafting.  Instead of passing hands of cards around, as is tradition for drafting games (a tradition solidified, incidentally, by 7 Wonders itself), each round, players will find themselves facing a wall of available cards, some face-up, others face down.

There are several types of cards, and each one provides different advantages.  Brown and grey Resource cards give you symbols to pay for subsequent cards.  Yellow Market cards generally give you a variety of advantages, though often at a cost.  Blue Civic cards generate victory points, and often chain together, letting you build future cards without paying for them.  Purple Guild cards add a variety of end-game scoring opportunities, and only appear in the 3rd round of play.  The last two types of cards, red Military cards and green Science cards, are somewhat unique, and I’ll cover those in a moment.

On a player’s turn, they can draw any available card (which is a card not covered by others).  When you draw a card, you can use it 3 different ways:

Building structures in Duel is pretty simple – as long as you have the required resources in your tableau, you can build that card.  The only resource which is ‘spent’ is coin – otherwise, simply having the symbol in your tableau is enough.  If you find yourself missing symbols, however, you can always pay the bank for the difference, at the cost of missing symbols is 2+the number of that symbol in your opponent’s tableau.

Jess:  That means that by cornering the market on a given resource, a player can make it very expensive for their opponent to buy it.  However, it also means that player will be low on other resources, since they spent their card-draws getting so many bricks or whatever.

The game’s three rounds, or Ages, are all set up the same way, with each Age’s unique deck of cards being arrayed before the players (the layout differs with each age, giving players different numbers of accessible cards at a time), and the cards in each age get progressively more powerful and expensive.

However, the most expensive investments in the game are the Wonder cards.  Each Wonder is unique, and both players have 4 Wonders they can potentially build.  By constructing these edifices, they will trigger powerful gains, such as points, resources, and even extra turns, giving huge benefit for their high cost to construct.

7 Wonders: Duel will end one of three ways.  If players make it to the end of the third Age, then scores are tallied based on the victory points they have acquired on their cards and their wonders.  However, the game can end immediately under two other circumstances:

Jess:  Duel is a fast, light game.  Each turn, you will really only be presented with a handful of options as to what cards you can take, but from the very beginning you will be thinking about how to best build out your tableau.  Add in the spikes of power that your Wonders can provide and the fact that some cards are obscured before they become available and you suddenly have a lot going on with just a few simple mechanics.

Andrew:  Granted, it can get a little predictable – the Age cards are finite and since you use nearly all of them every game, eventually you will start to see patterns even with the face-down cards to mix things up.  However, that said, we don’t care.  We have enjoyed every game of Duel we’ve played.

Our one substantial criticism of it is that the two immediate victory conditions, particularly Military, can occasionally bring the game to a crashing halt, seemingly out of nowhere – unsatisfying if you’ve invested several turns of a round to setting up a great combo, only to have a just-revealed military card allow your opponent a win you couldn’t have anticipated.  Still, that doesn’t happen too frequently, and it just incentives both players to not ignore the Military track.

For those of you who are familiar with 7 Wonders, we think you’ll find Duel to be a perfect 2-player adaptation of the original.  If you’re new to the game, Duel actually represents a good jumping-on point, to get a sense of whether this excellent tableau-building franchise is for you.

Finally, we just wanted to draw attention to the insert we have, provided by our friends at The Broken Token.  While the insert that comes with Duel is actually really quite excellent, the Broken Token adaptation is superior because of its removable component tray as well as the fact that it keeps the components organized, even when the game is stored vertically.  You can snag the insert from Broken Token right here.

7 Wonders: Duel is really a great little date-night game.  It’s fast, its thinky (without being cumbersome), and it brings together some very simple, very clever mechanisms into a well-working whole.  If you are a member of a gamer pair and don’t need direct conflict to have a game feel satisfying, then definitely give 7 Wonders: Duel a shot!

(Thanks to Broken Token for providing our insert for review. Their generosity didn’t influence our opinions.)