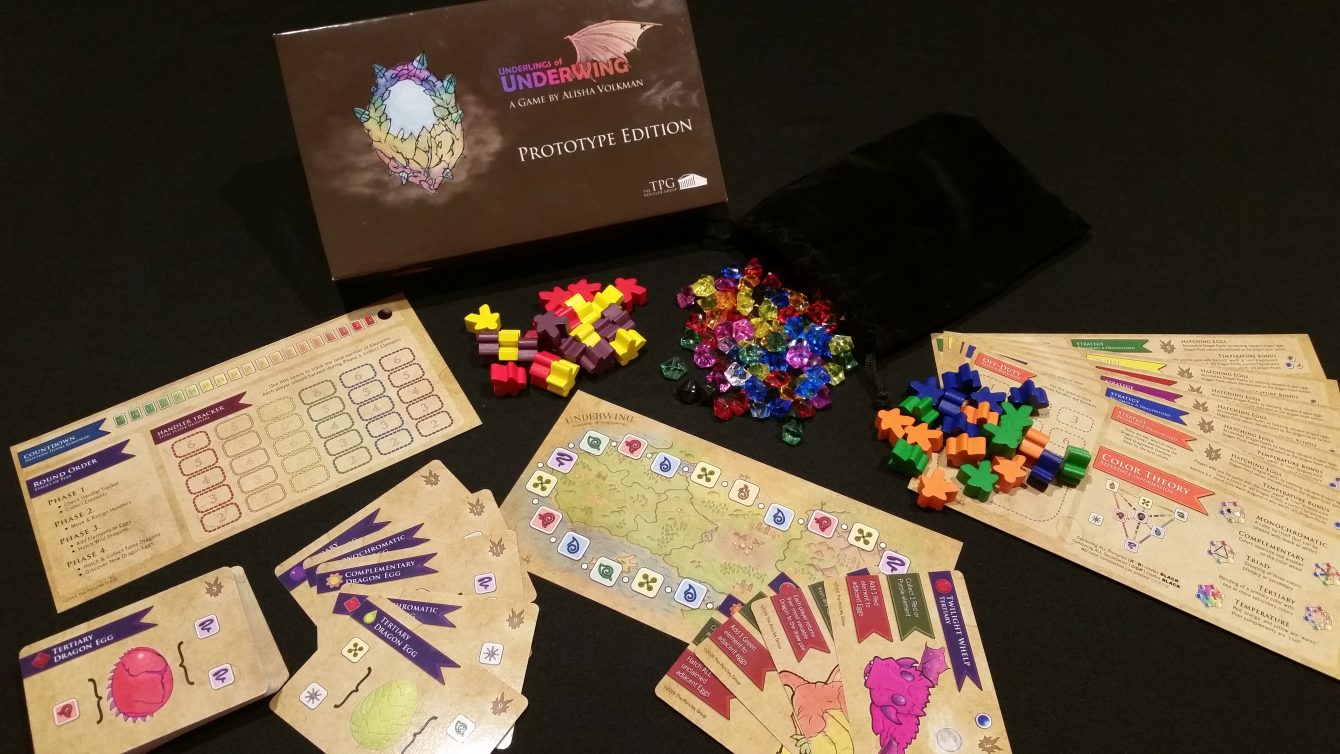 **Edit:  It’s up now!  Check out the Underlings of Underwing Kickstarter here!**

Going up on Kickstarter August 25th, Underlings of Underwing is a new game from Alisha Volkman, Stephen Slota, and Kevin Ballestrini.  In it, a whopping 2-6 players will take on the roles of would-be DragonLords, each trying to claim and hatch the most valuable stable of dragons from the eggs which are ready to hatch!

**Kickstarter Prototype Realness – These photos are from our prototype, provided for our preview.  Nothing is final!**

Jess:  Since this is a Kickstarter preview, we’ll spend a little more time than usual going over the rules, though Underlings of Underwing is actually a mechanically straightforward game.

At its core, UoU (is that an ok abbreviation?  I hope so) is a worker placement and set collection hybrid, with some color theory to add complexity.  Generally speaking, each player uses their workers to gather colored crystals and then assigns those crystals to the field of available dragon eggs, in an attempt to hatch the most valuable, powerful dragons possible before the game ends.

Each round is divided into 4 phases.  These phases allow you to assign your workers (handlers), gather elemental crystals, assign those crystals to eggs, and hatch eggs that have been completely ‘imbued’ (all their crystal slots filled).  The breakdown looks like this:

Phase 1:  Gather crystals from the bag.  For each worker not assigned to a colored spot on the field, draw a random gem.  For each handler on the field, get a gem of the color they are standing on, then march them one space clockwise (so they get a different color next round).

Jess:  Claiming eggs is a key action and it’s how you will make the majority of your points.  But handlers assigned to eggs only let you draw random crystals from the bag, as opposed to the ones in the field, which give guaranteed colors.  Balance wisely!

Phase 3:  Assign crystals.  For each handler you have, you must assign a single crystal to a space on one of the eggs (though not necessarily an egg you have claimed).

Andrew:  Here’s where the color theory bit comes in.  Assigning crystals is simple enough when you have the exact crystal that matches the required color on the dragon’s egg, but you can also assign groups of primary colors to create secondary colors, like using a yellow and a blue to fill in a green slot.  Like so:

Phase 4:  All eggs that are completely imbued hatch.  If the egg is (hopefully) claimed by a player, that player takes the card in front of them – during the next round, they will flip the egg over to the dragon face, reclaim their handler for reassignment, and gain the benefit listed in the dragon’s green text.

Andrew:  These rewards generally grant you some extra crystals, which is great, but some let you gain additional handlers or even give you a per-turn gem, making it easier to meet future requirements!

Andrew:  Well, more on that in a bit.

Should an egg be completed without being claimed, however, a wild dragon will be born.  It stays in its location on the table, and its negative red text resolves, probably screwing up all kinds of carefully laid plans.

The game will continue for a number of rounds determined by player count, and at the end, each player will total up the value of the dragons they have hatched, and some bonus points will be given to players depending on whether they have majority over the warm or cool colored dragons, or if they have a perfectly balanced stable.  Player with the most points wins!

Andrew:  Underlings of Underwing does a lot of things right.  We love the whole color match/color theory mechanism, and it is so incredibly satisfying when you manage to plan out and get exactly the gems you’ll need to hatch that ultra-valuable 20 point dragon.  Even our prototype was attractive, and I think the final product is going to be absolutely gorgeous.

UoU also has plenty of chaos in it, with random bag draws sometimes letting a player surge ahead (or fall behind) for no reason other than the fact that Jess always draws exactly what she needs all the damn time, but that randomness is balanced against the mechanic of sending handlers to the field or getting dragons that give you per-turn draws.  We found gameplay to be accessible and enjoyable overall. 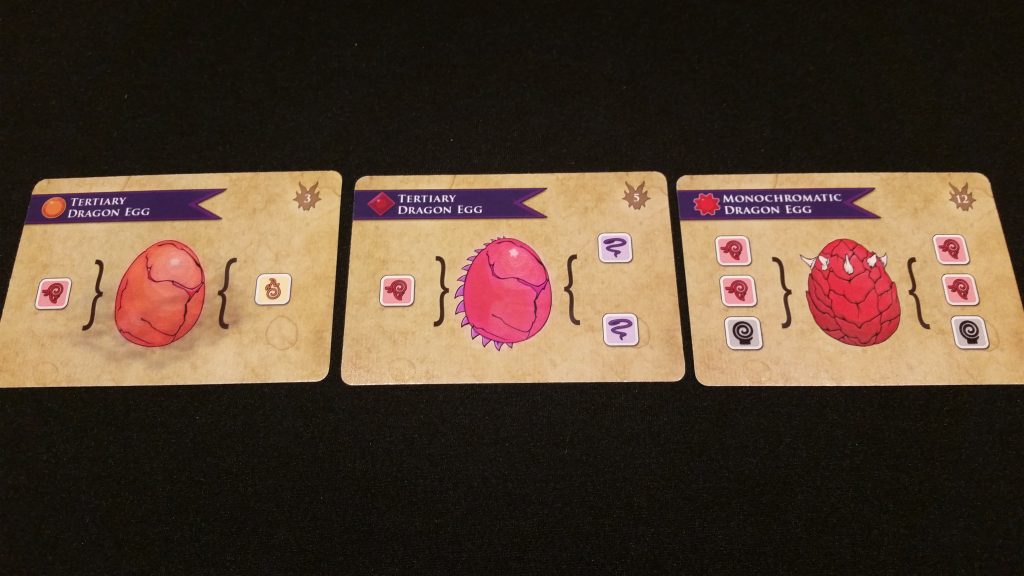 That said, there were a few issues worth noting.  Though, again, we played a prototype with rules still in development, so any or all of our critiques could be ironed out by the time the game is ready for release…or not, which would be fine too, I guess.

In a nutshell (dragon shell?), Underlings of Underwing is a decent game of set collecting, with some minor worker placement elements and a neat little color theory twist.  We love the concept and the design, and, despite some minor tweaks and missteps, we had a good time playing it.

You can click here to check out the Underlings of Underwing home page, which will redirect to their Kickstarter as soon as it’s up!

(Thanks to The Pericles Group for sending us our prototype for preview.  Their generosity didn’t influence our opinions)

One thought on “Underlings of Underwing Kickstarter Preview”