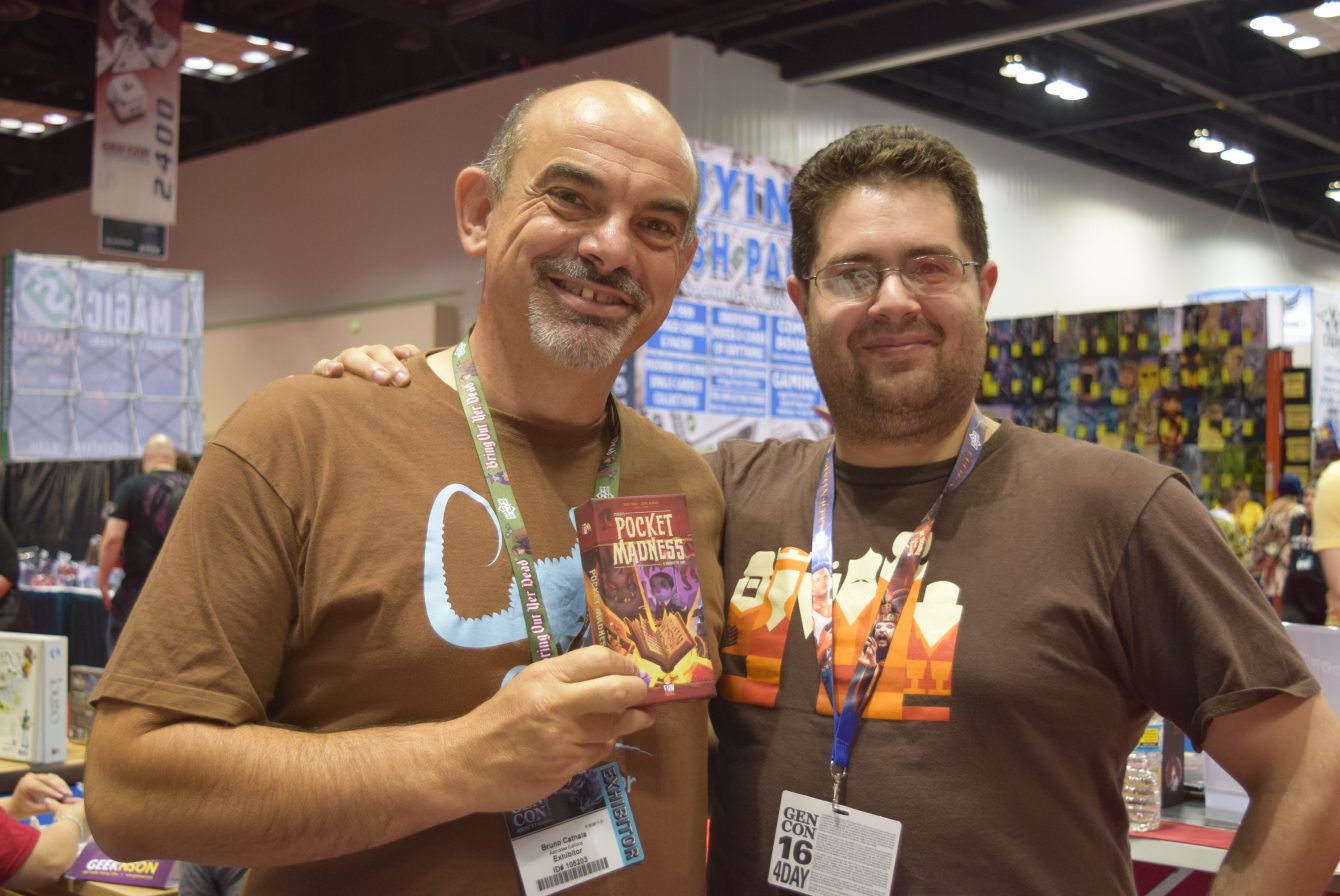 We were lucky enough to get a guided tour through the Passport booth at Gen Con, and we were treated to a glimpse of several new and upcoming games!

Jess:  Passport is the US publisher for many titles that we love, such as CV, Praetor, and my absolute favorite, Tokaido.  We were so excited to see what they have coming up!

Andrew:  Yeah!  Visiting Passport means getting to see stuff from FunForge and LudiCrations too!  And that means I got to meet one of my favorite designers around, Mr. Bruno Cathala!  I may have squeaked. 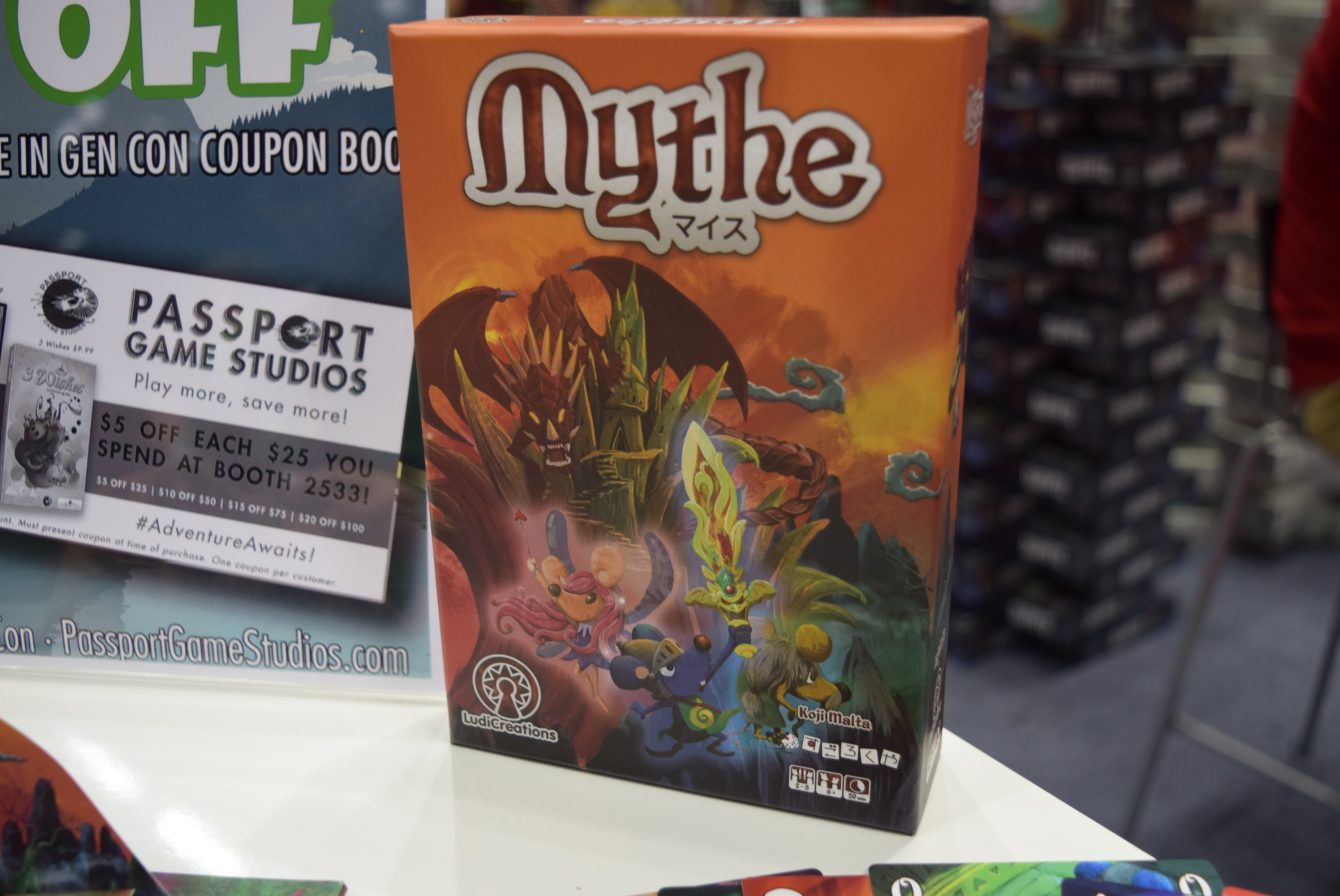 Andrew:  Speaking of squeaking…A beautiful little game about heroic mice trying to defeat a dragon and recover their sacred cheese set inside a pop-up book, Mythe grabbed my attention the instant I saw it.

Jess:  Literally!  You were mid-sentence and walking, and then all of a sudden you were transfixed!  But it’s easy to see why –  the game is tiny and gorgeous and it looks like so much fun! 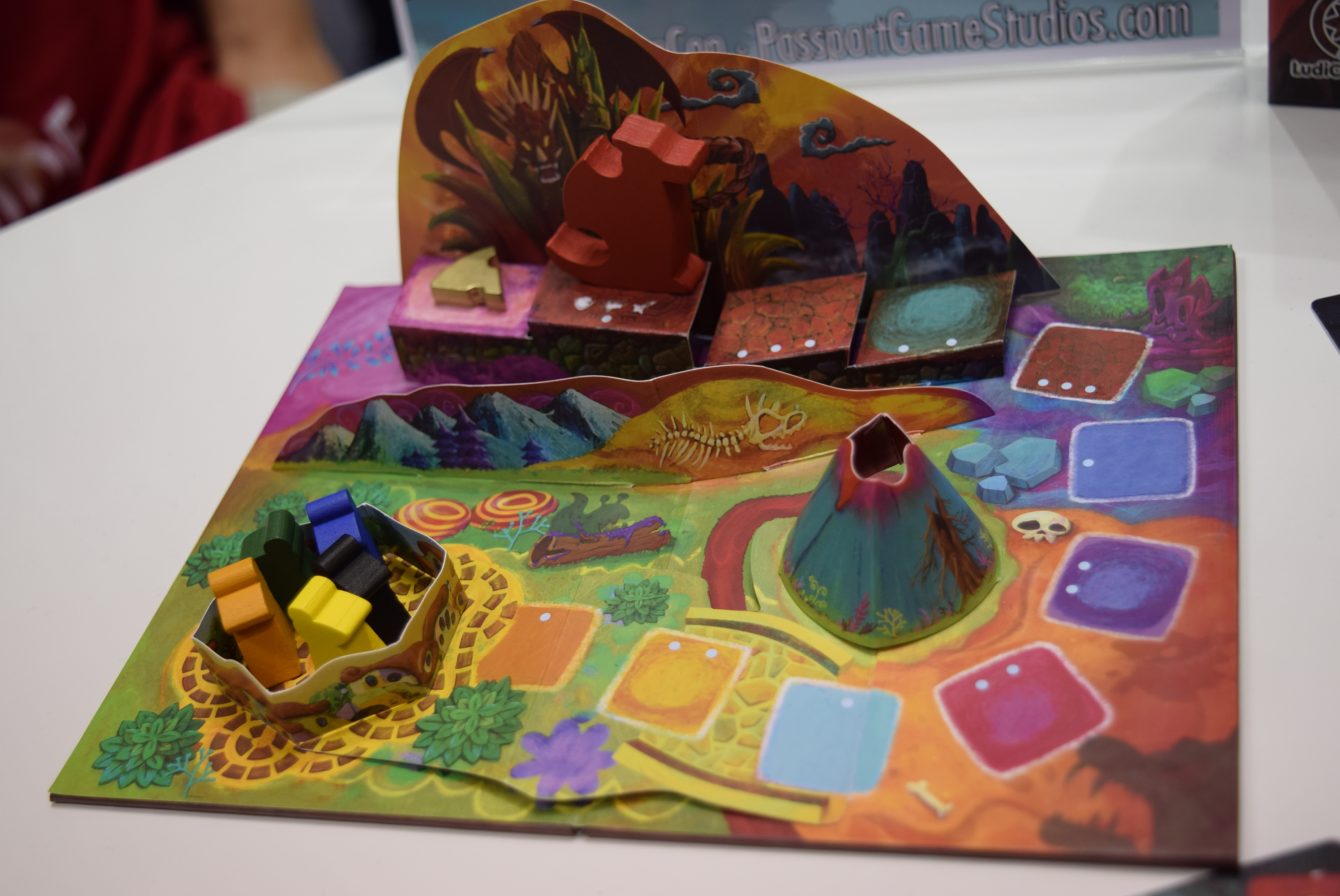 The mechanics are a neat little twist – during your turn, you will use cards from other players’ hands to try and gather the items you need and move along the track.  But if you draw the wrong cards, you bust.  And at the end of your turn, you can seed your own cards into your opponent’s hands, so you have some limited information about what they are holding.  It’s pretty darn brilliant.

We think this one is going to be a hit with the light/medium weight crowd.  Its theme is completely family-friendly, but there is a surprising bit of strategy and memory involved.  We can’t wait to get some playtime with this one. 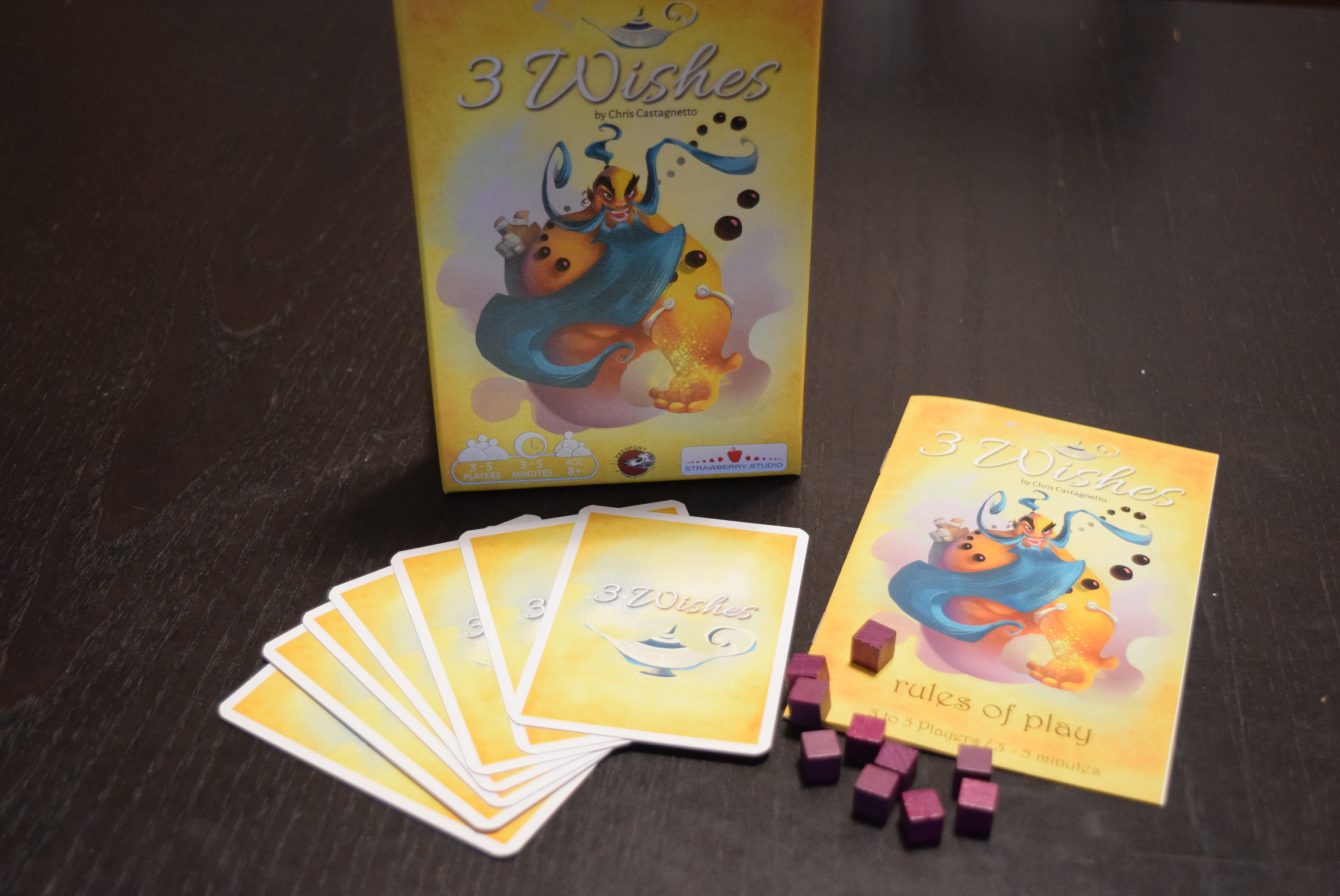 A new microgame from Passport, 3 Wishes weighs in at around 1 minute per player, so brevity is it’s strength.  In it, each player is trying to come up with the best 3 wishes that they can get from a genie, trying to best balance between getting a cool superpower, an amazing thing (like a talking dog), and a wish that will benefit the whole world.  Gameplay consists of shifting cards around between yourself and your opponents, with the hitch being that these face-down cards are rarely glimpsed even by the player who holds them.  When you think you’ve managed to get one of each type of wish, you can declare the game over and whomever has the best hand of wishes wins!

Andrew:  The whole microgame thing is a great movement, as far as I’m concerned.  Passport gave us a copy of 3 Wishes, so we will be doing a more detailed review soon, but at first look it seems like a lot of fun packed into a little box!

In Quartz, players will take turns drawing crystals from a bag to simulate their efforts at the mines.  As players draw, they are pressing their luck, because as soon as you draw a second of the black Obsidian crystals, you bust for the round.  However, by drawing sets of gems and cashing them in before they bust, players can score big points – that is, as long as someone doesn’t use attack cards to mess with you.  The person with the biggest pile of points at the end of 5 rounds wins.

Andrew:  I totally agree, but I have to say, I didn’t care for this one much.  It doesn’t quite seem to know who the target audience is – gameplay is super-light and arbitrarily punishes you (draw 2 obsidian?  You’re out for the whole round), so probably aimed at more of a casual crowd, possibly a family game?  Then again, it feels like it lasts 2 rounds too long, it’s take-that elements are pretty brutal, and the scoring is really mathy (combos of gems increase the value of other gems, that can then combo, etc.), so honestly, I have no idea who this game is for, precisely.  But it sure is pretty, no doubt. 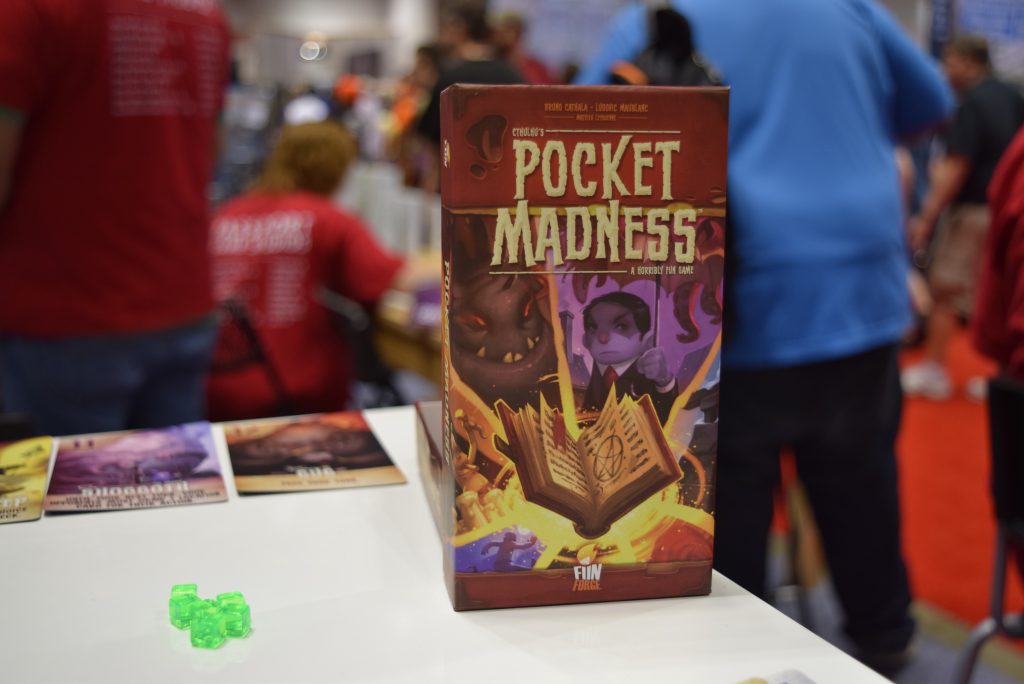 Jess:  Now this I can get excited about!

Shaping up to be a great little hand management game, Pocket Madness is about a pile of cultists trying to drive each other insane while simultaneously not being driven nuts themselves.  Uniquely, one of the central mechanics is-

Andrew:  Actually, let’s let the man himself, Bruno Cathala, explain!  I fanboy at him as little as I can manage, but, honestly, I fanboy a little too much.

We think Pocket Madness looks like a good bit of fun!  Great art, simple design, and a small package make this one a must-get for us when it comes out later this year.

Finally, we got another peek at the Tokaido Mobile App, being developed for release later this year!  Forgive the dark photos – it was a little hard to get good shots with the convention lighting being what it was.  But honestly, it’s amazing. 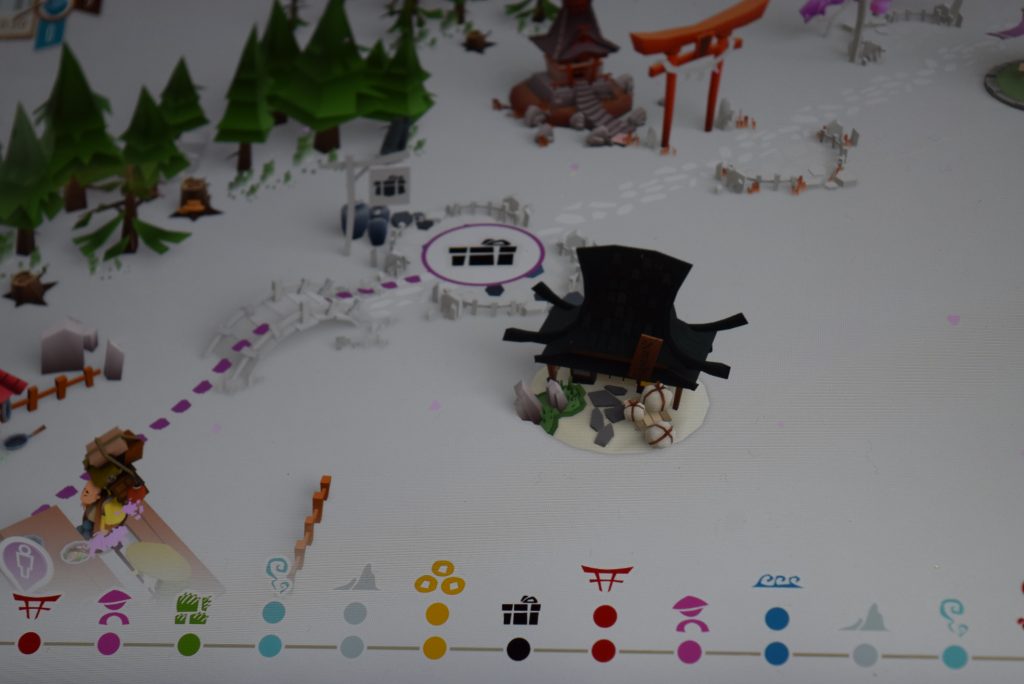 Jess:  Holy cats, you guys, I am so excited about this!  Like I said, Tokaido may be my favorite board game ever, and this app is shaping up to be my favorite digital port of a board game ever, too.  The animations are gorgeous, the gameplay is smooth, and even though it was still only a beta, it could so easily be a finished product. 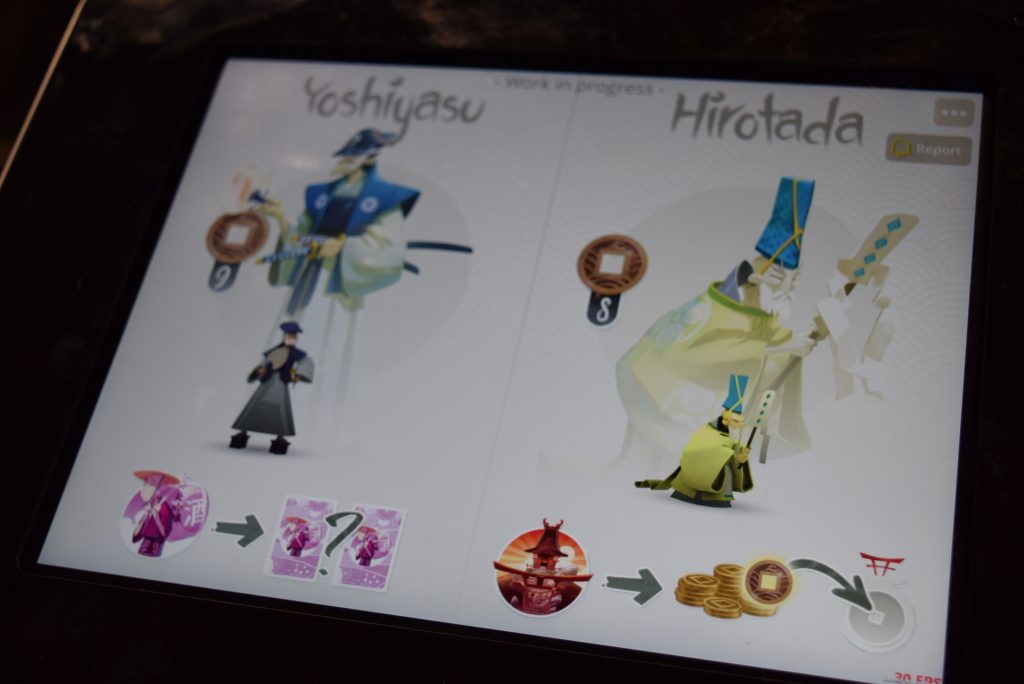 Andrew:  For sure.  This is an absolutely fantastic port – a tremendous amount of love and care went into this, and I simply can’t wait to get my hands on it. 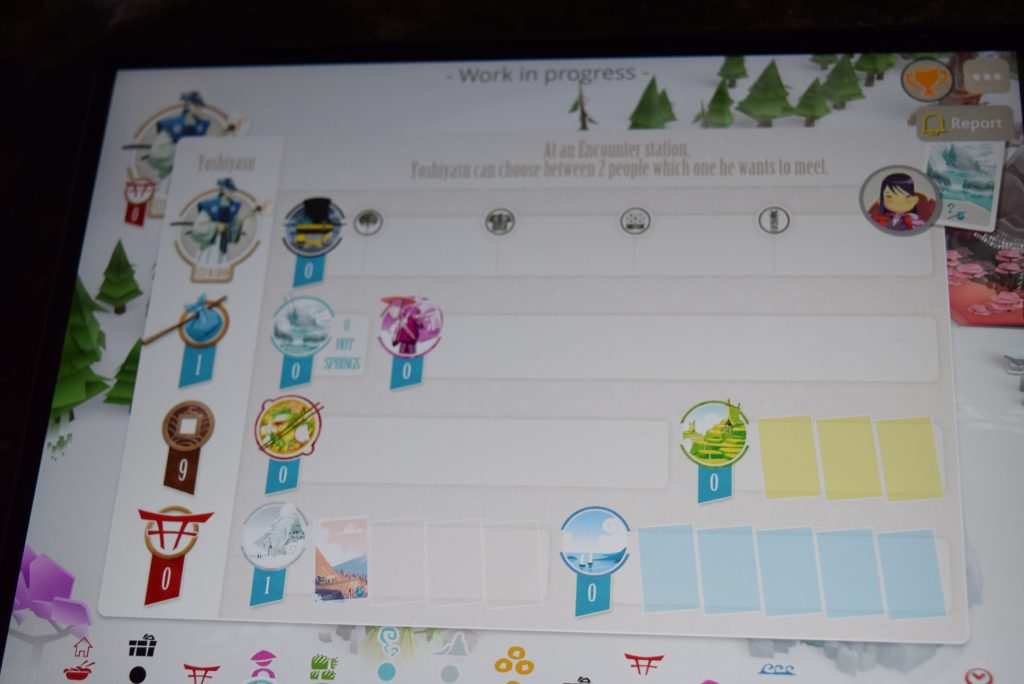 Andrew:  So that was a quick look at what we saw at the Passport Games booth this year.  We’re really looking forward to a lot of their upcoming titles, so it was really awesome to get a close-up look at their stuff.  I especially love that Passport makes it possible for us to get our hands on games by the likes of FunForge and Ludicrations, so there’s even more to love there!