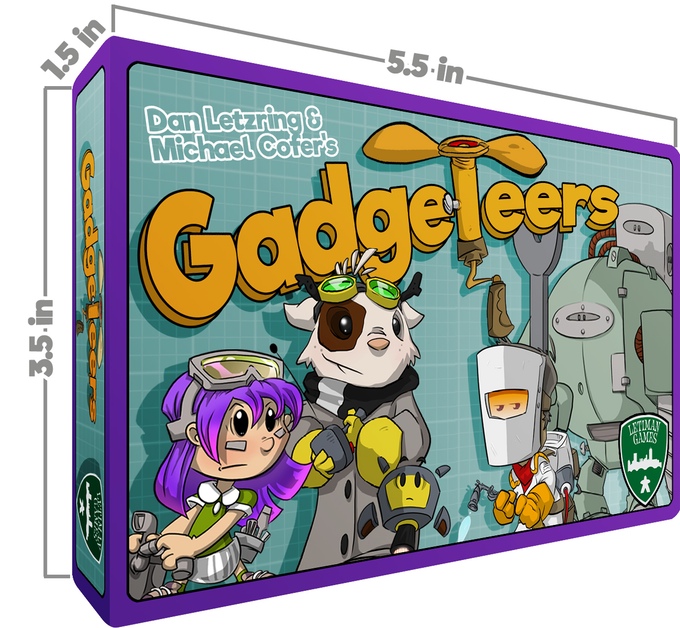 Up now on Kickstarter, Gadgeteers is a bidding, bluffing, and set completion game from Dan Letzring and Mike Cofer and Letiman Games.  With adorable art by Jesse Labbe and Alisha Volkman, this small box game at first appears simply-constructed; however, does the casual exterior conceal more complex machinery within?  Grab some goggles and grab a spanner as we cobble together our review!

**Kickstarter Prototype Warning! – Despite being cute and excellent in quality, our photos were taken from a prototype sent to us by Leitman Games…or stolen from the KS page.  Final product may look different!**

In Gadgeteers, 2-3 players will take on the task of inventing the, and I quote, ‘Zaniest Gadgets!’.  The setup is sublimely simple, and the gameplay mechanisms are really easy to grasp.  Here’s the quick overview:

Each player gets a pile of bidding tokens.  They get lots of value 1 and 2 tokens, but only one 3,4, and 5 each.  They also get a player screen for hiding those tokens.  The shared resources are set up in the ‘junk pile’, a collection of humble components you and your fellow inventors will use to create your mechanical masterpieces.  As a nice little additional gameplay element, unique player powers can be added to each color, making it interesting to try each of the different inventors.  Finally, a number of possible gadget blueprints are revealed, and the game begins!

There are 2 Phases per turn; the Bidding phase and the Gadget phase: 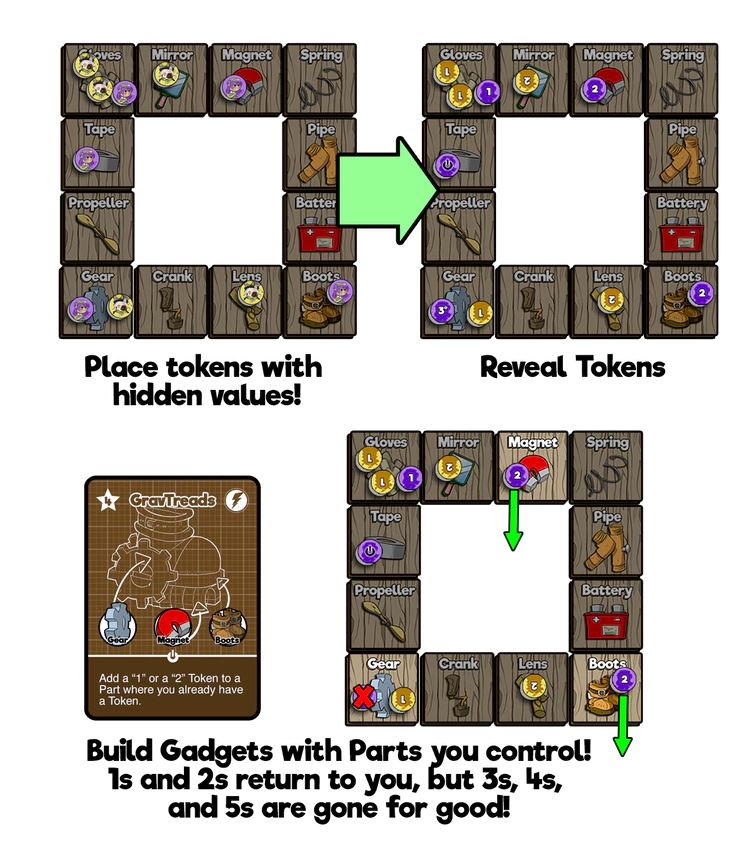 Having removed your bid tokens in order to make a gadget, you now likely open the possibility for another player who didn’t have majority before to now build something themselves.  This process will go until both players either can’t or choose not to build, in which case there is a brief cleanup phase – new gadget blueprints come out, and each player has the option to recall bid tokens left on the board (but they can leave them!).  Then the first player token passes and the game continues until someone builds their 4th gadget, ending the game.  Most points wins!

Andrew:  Ok, so a few things that I love.  Firstly, it’s a bluffing game with no actual lying.  Because you are placing your bid tokens face down, folks don’t know if you’ve invested a huge 5 point token or a lowly 1 pointer (or possibly a power token, more on that in a sec).  So it creates tension without someone needing to lie convincingly.

Jess:  That’s a great part of Gadgeteers.  I also like how the gadgets you build aren’t just worth points most of the time, they actually do things.

Andrew:  Right, that’s another thing worth talking about.

With only a few exceptions, the gadgets in Gadgeteers can be used after they are built to provide some benefit, usually manipulating bidding tokens or making subsequent gadgets easier to build.  In order to activate these effects, you will need to withdraw a power token you had previously placed on the junk cards.

Jess:  Power tokens don’t provide any majority influence, so putting them out ‘wastes’ one of your 5 token placements per bidding phase.  But since they go out face-down like other bidding tokens, they are fantastic ways to bluff your opponents, making them think you’re spreading influence when you don’t really intend to. 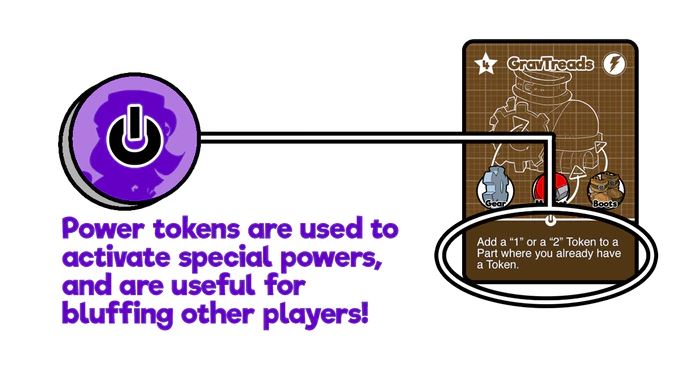 Gadgeteers has a ton going for it: fantastic art, accessible but engaging gameplay, simplicity in design and smart execution.  They managed to pack a whole lot of game into this little box, and we really love that.  And for the price point on the Kickstarter, you’d be hard-pressed to argue against its value. 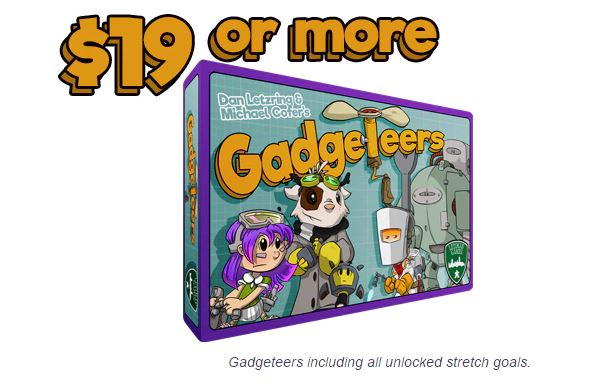 That said, there were some little things we didn’t strictly love about it.  Your mileage may vary, but here are the negatives, as we see them:

The good news is that none of these criticisms are deal-breakers, and some are self-correcting: any round where no gadgets have been built sees an additional new blueprint added to the pile, so eventually the deadlocks will clear up.  But when they are there, they tend to slow things down.

All in all, we think Gadgeteers is a fun, light game with the potential to introduce a whole crowd of younger gamers to the concept of bluffing and bidding mechanics.  It’s accessible, fun, and will fit nicely into most any collection.  And if you think you’re really going to love it, you can even snag a cool-yet-not strictly necessary playmat.  We have to say, we think it’ll look great!

You can check out the Gadgeteers Kickstarter now and snag yourself a copy!

(Thanks to Letiman Games for providing our prototype for preview.  Their generosity didn’t influence our opinions.)