Grey Fox Games has seen some awesome success with Champions of Midgard, but in an effort to not be pigeonholed into one type of game, they are releasing a whole line of new games soon and we had a chance to check them out at this past Gen Con!

Andrew:  Grey Fox makes some fantastic games, like the aforementioned Champions, Conquest of Speros, and Deception: Murder In Hong Kong (uh, spoilers for our upcoming review, I guess?).  It’s always a blast to see what they have going on. 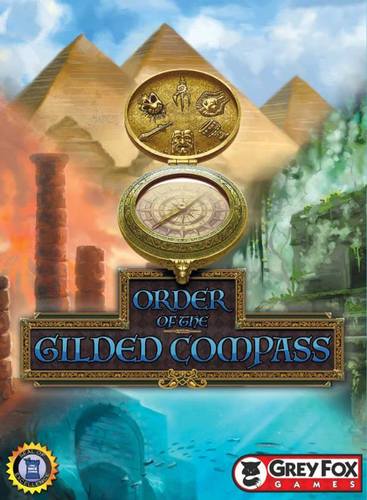 We demoed this with Joshua Lobkowicz of Grey Fox Games. You could call Order of the The Gilded Compass a reskin of Alea Iacta Est, but it is so much more than that! The theme is different, there are more locations, and has a variable set-up so every game can feel fresh. 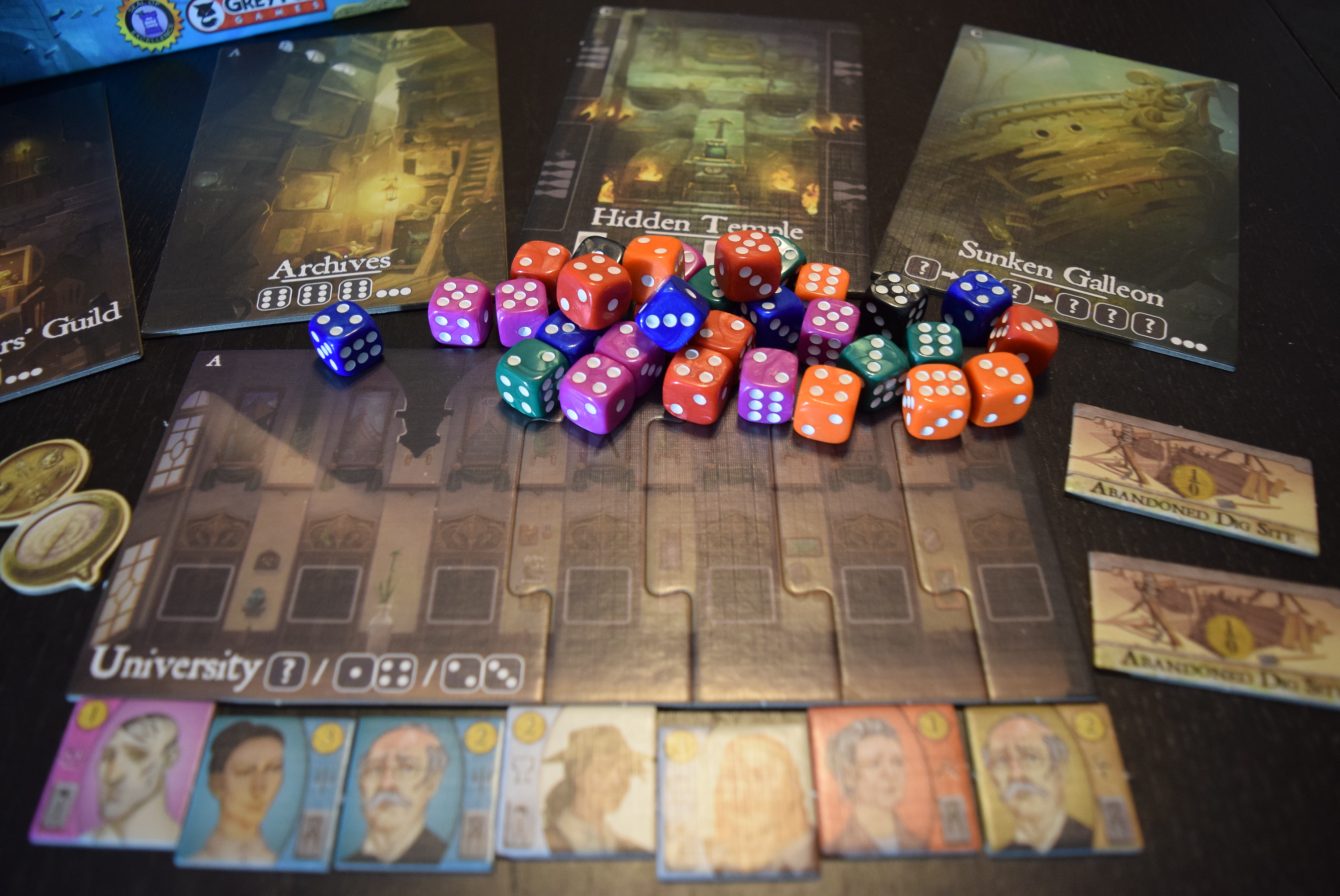 Andrew:  Normally a fan of all dice games, Alea Iacta Est simply didn’t work for me.  Somehow, this re-theming and slight mechanical update has completely turned me around to it.  I really enjoyed this one!

Each player is a treasure hunter looking to gain enough prestige to get invited into the secret Order of the The Gilded Compass, which marks you as one badass adventurer. You’ll start each turn rolling all of your dice and then assigning as many as you like to one location (so long as those die fit that locals requirements). Whomever has the higher total of dice at the end of the round gets the rewards from that spot. The locations all have different uses and will do things like give let you dive for treasure or hire an assistant. After five turns, the game is over and everyone tallies up their treasures. The person with the most points wins.

Jess: I really enjoy dice allocation games too and, for me, Order of the The Gilded Compass was a blast. I like how there are many different ways to score points, so you never have to take the same tactic when you play. 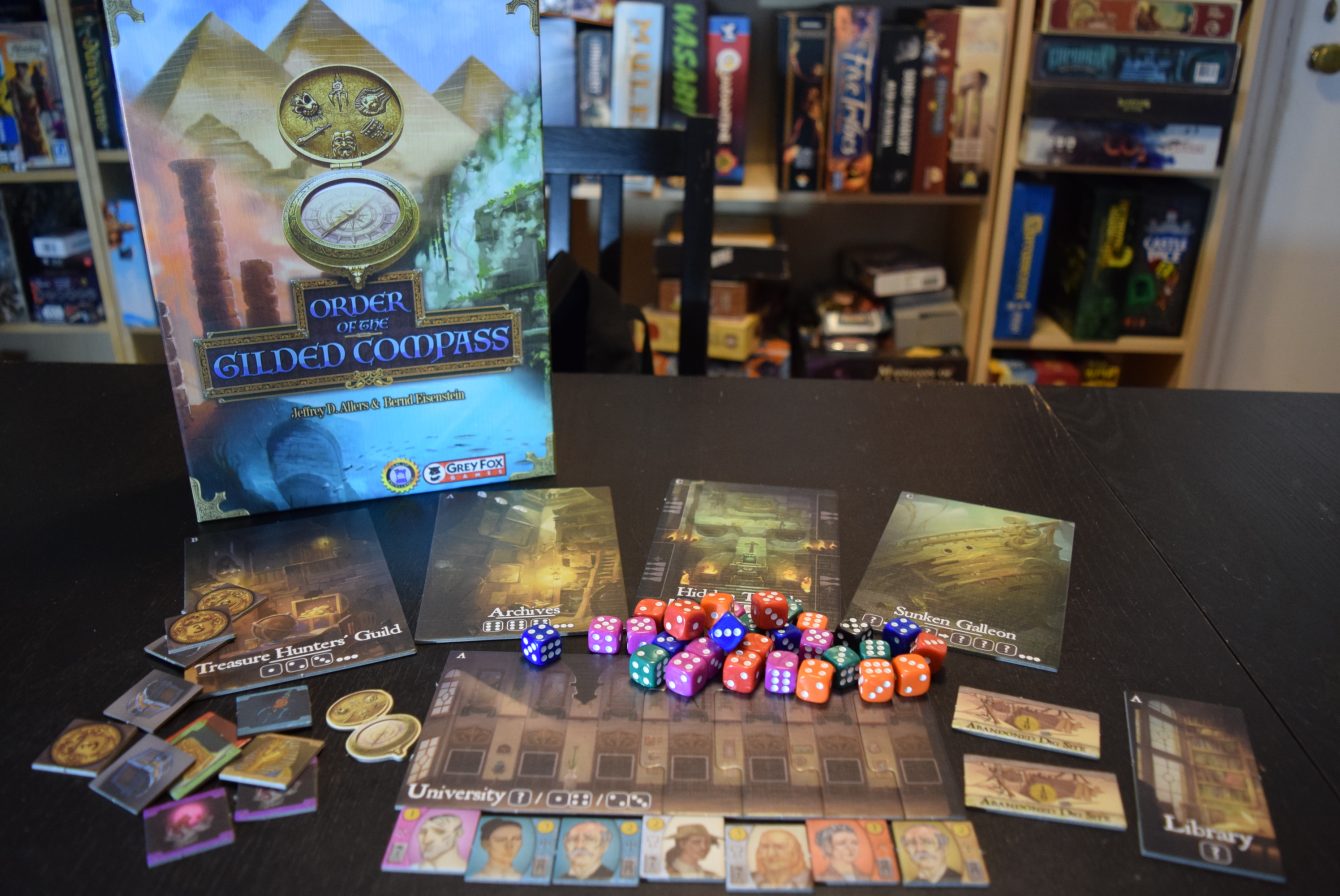 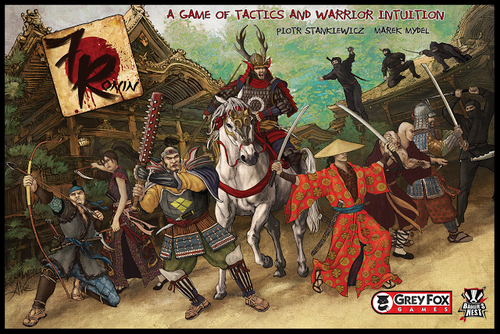 Jess: I’m not usually one for head to head games because I don’t like going after a player. In 2 player versus games there is not vindictiveness, no picking on someone; it’s just you vs your opponent and that makes it a lot easier to engage. 7 Ronin does this really well using an asymmetrical play style. 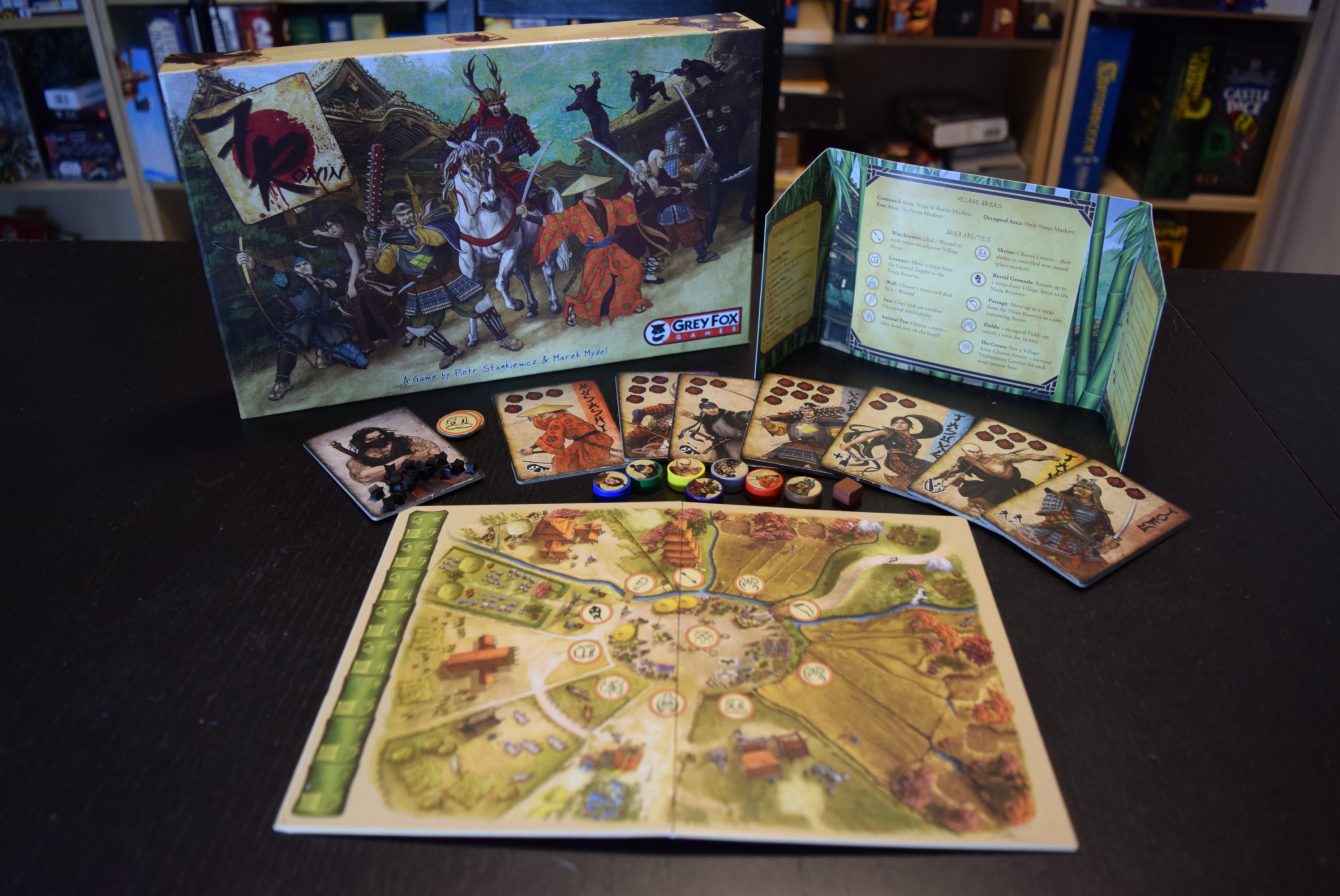 7 Ronin was designed with the movie Seven Samurai, by Akira Kurosawa, in mind. One player takes on the roles of the seven defenders of a village, while the other player embodies hordes and hordes of ninja. The object of the game is to survive until the end of the game if you are the Ronin, or take over 5 locations if you are the ninja. Both sides can also win if they eliminate the other (which is pretty darned hard).

One of the best things about 7 Ronin is that each Ronin has a special ability, and each territory the ninja control give them a once-per-turn power.  It adds lots of strategy beyond simple area-control.

Andrew:  My favorite part of 7 Ronin is how, despite it being a tactical 2-player game, the contention was entirely in trying to out-think your opponent.  The mechanics are simple and smart – you and your opponent secretly assign units around the village, then simultaneously reveal.  All the action is in the pre-planning; once your pieces are down on the board, there are minimal choices to be made.  That gives it a very tense, very playable feel, where your cleverness is rewarded and can’t be undone by a move you couldn’t possibly have seen your opponent considering (no top-drawing a card or countering a move or getting unlucky on dice in this one).  I think it’s pretty damn brilliant, and I had a great time with it. 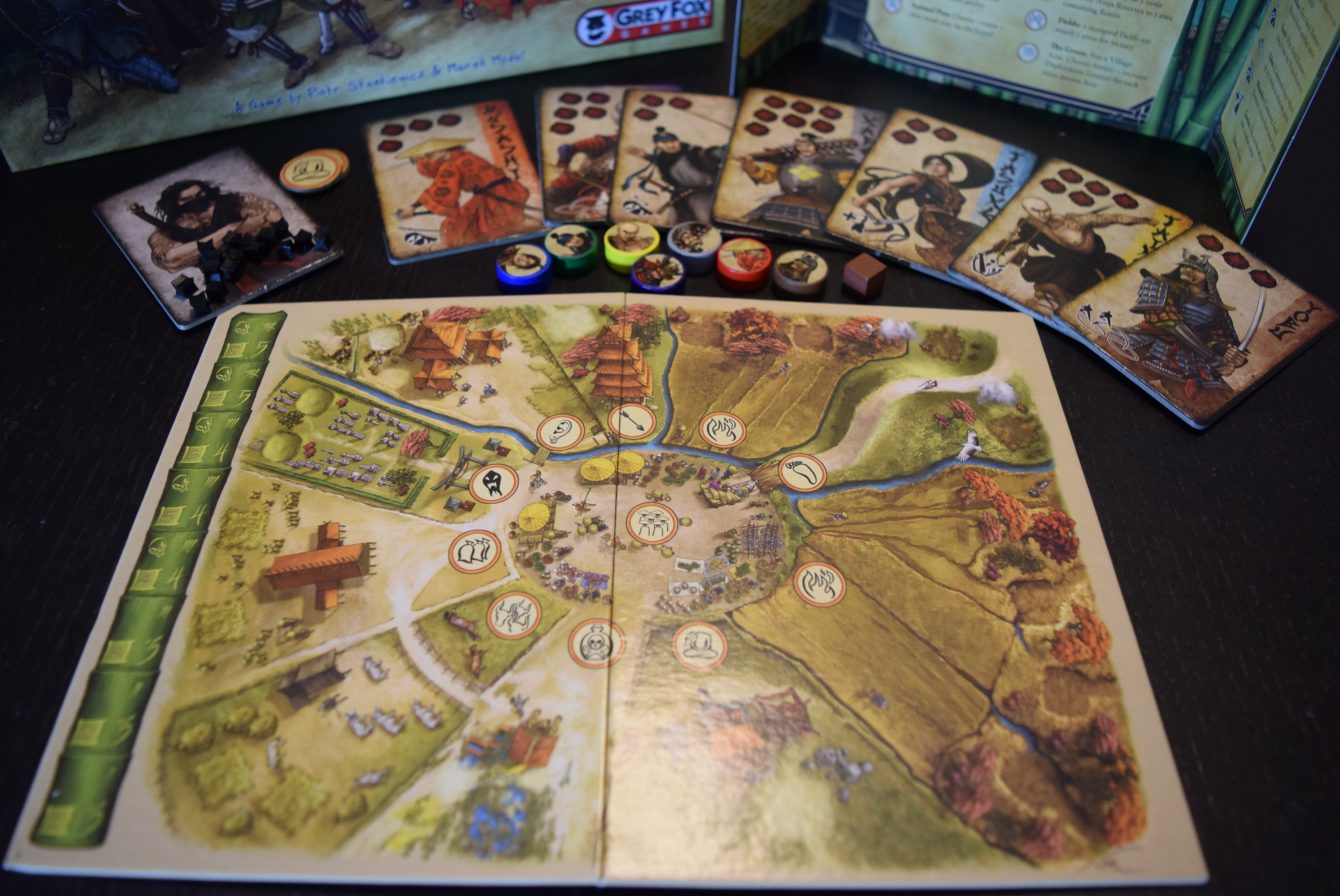 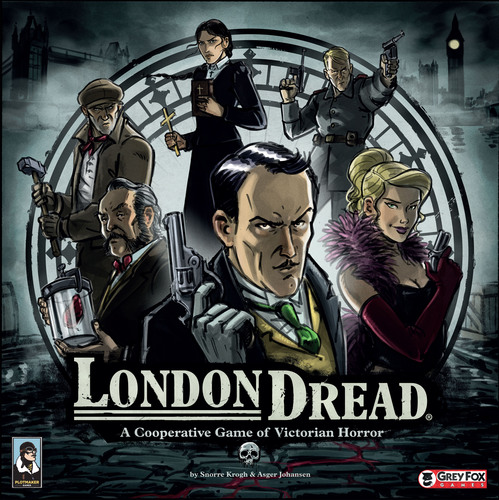 London Dread is a co-op full of  Victorian mystery and a touch of the supernatural.The players are all investigators trying to uncover the dark secrets hiding in the depth of England’s shadows. You play through scenarios that are broken up into chapters. Players will rush to plan our their investigations during the first phase which is timed. Then they will watch the story unfold as they revels the results of their efforts in the second phase.

Jess: I was really disappointed I didn’t have a chance to try London Dread at Gen Con. The fact that the table was always packed with players speaks to how attractive this game is.

Andrew:  Yeah, I wish we had gotten a chance at this one, but I get the feeling it will end up in the collection real soon.  It looks simply too interesting not to snag.

Thanks to Grey Fox for giving us a walk-through of their booth!  We always enjoy seeing what they are up to, and they did not disappoint!