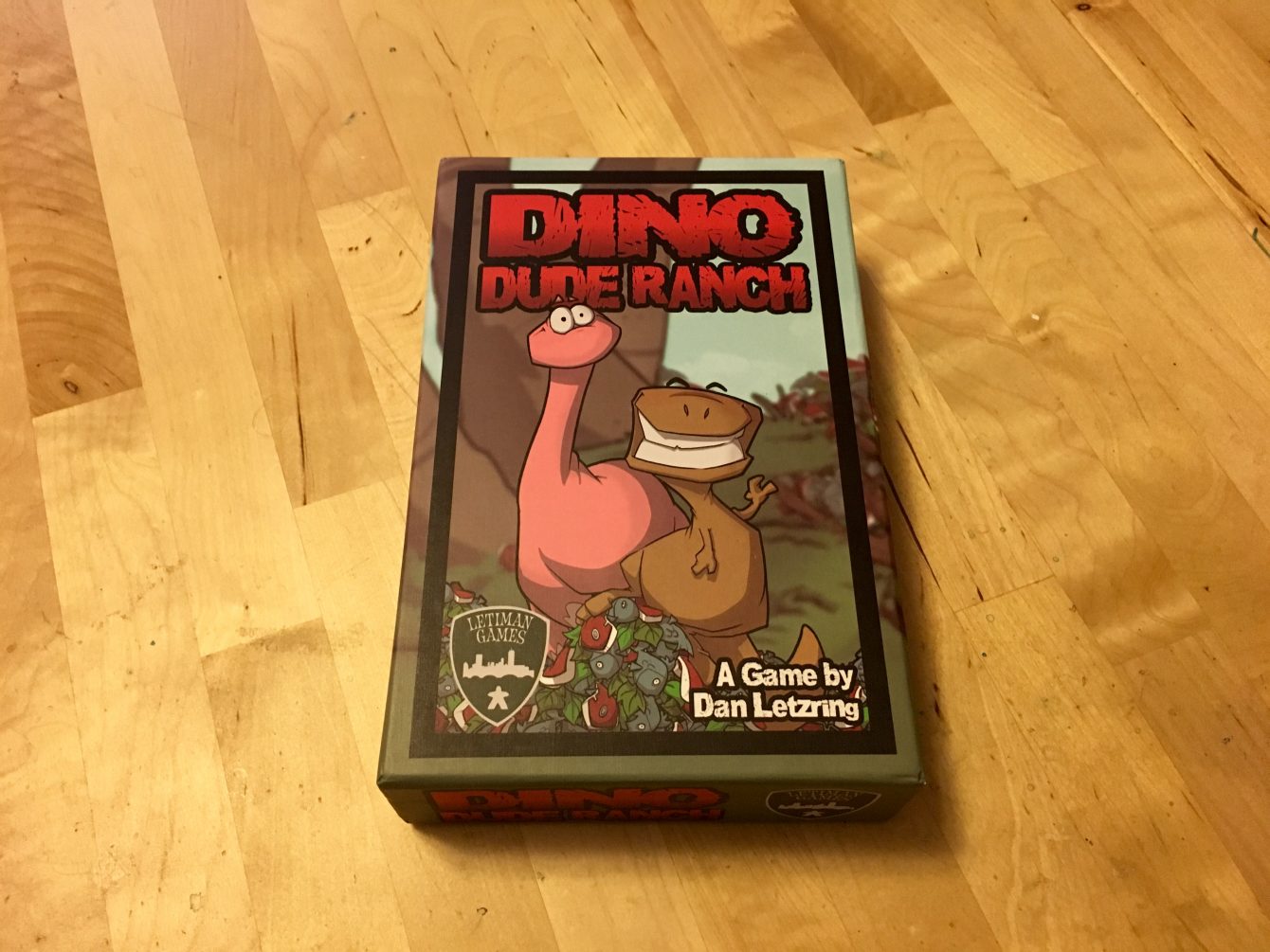 Dino Dude Ranch – from designer Dan Letzring and publisher Letiman Games – kind of sells itself. At least for me. The name implies either managing a ranch full of dinosaurs, or being a dinosaur that is also a rancher. Either one of those options sounds awesome.

In this case it’s the former. You get to run a dude ranch and populate it with dinosaurs. What else do you need, really?

Diana: We’ve been looking at a lot of cute games lately.

Rob: I suppose we have. I wouldn’t necessarily call that a bad thing, though.

Diana: No, not really. And this one is definitely cute. I love the dinosaur illustrations!

Cuteness aside (although it is really, really cute), Dino Dude Ranch is a very straightforward game about wrangling dinosaurs. Everyone gets their own ranch board with either 11 or 15 (depending on the number of players) spots to fill. From there it’s a race to see who can collect the most theropods before they’ve all been taken in – or before someone completely fills up their ranch.

Each turn begins with rolling a couple of dice, then dealing with the results. Any of the three food icons (leaf, fish, or meat) will yield the appropriate food tokens, while tar pits mess things up and hired hands grant a free card draw. From there, food tokens can be used to lure dinos to the ranch (match the tokens to the dinosaur’s requirements) or to draw extra hired hands cards.

The wrinkles – and there are always wrinkles – come in by way of those tar pits and hired hands. Tar pits will muck up a ranch (pun definitely intended) by taking up space and deducting points at the end of the game. Helping hands are cards that will let you perform all sorts of special actions – from scooping up dinos for free to getting rid of those dang tar pits.

Rob: It’s so simple, but at the same time a lot of fun.

Diana: It really is. And, again, it’s adorable!

Rob: I’m not sure if it’s a kids game thing or a smart design thing, but this is the second game we’ve played recently that never really ruins your plans. Like, no significant consequences for rolling what you don’t want or anything like that.

Diana: I’m not sure either, but I like it. Although I suppose it’s possible to keep rolling tar pits and get screwed over that way.

Rob: I guess so, but even I didn’t manage anything close to that and dice games always have it in for me.

There’s a good chance players will often find themselves buried in vegetation – that’s just how the dice tend to roll. This isn’t necessarily a bad thing, though, because the food can be used to bring in several different kinds of herbivores. If you’d rather not fill up on low-scoring plant eaters, or if you have a special ranch goal that you want to fulfill and it doesn’t involve them, you can also spend two tokens to draw a hired hands card. At first this seemed like an odd design decision because why would anyone want to get rid of their food tokens? But when you’re trying to stock your ranch with a bunch of higher value fish and meat eaters, and all you roll are leaves, it can be something of a godsend.

Hired hands themselves are also fairly interesting. The cards can have a pretty wide assortment of effects, and there’s no hand limit. Depending on how you roll and whether or not you spend any food tokens, it’s also possible to draw anywhere from none to three of them on a single turn. This can lead to a pretty impressive set of rule-breaking options, and can even inform strategies to a small degree.

Diana: About that. How come you kept drawing the cards to get rid of tar pits?

Rob: I’m not sure. I shuffled everything, but they just kept ending up in my hand. And I didn’t even need to use them.

Rob: Not my fault!

Dino Dude Ranch lives up to expectations (you manage a dude ranch full of dinos), but also manages to be both entertaining and very accessible. I suppose it’s technically on the “younger audience” side of simple, but it doesn’t feel like it’s been dumbed-down for the sake of the Ages 8+ on the box. It’s fun for all, and if nothing else will make for a good in-between game to play with friends.

(Thanks to Letiman Games for providing our review copy. Their generosity didn’t influence our opinions.)