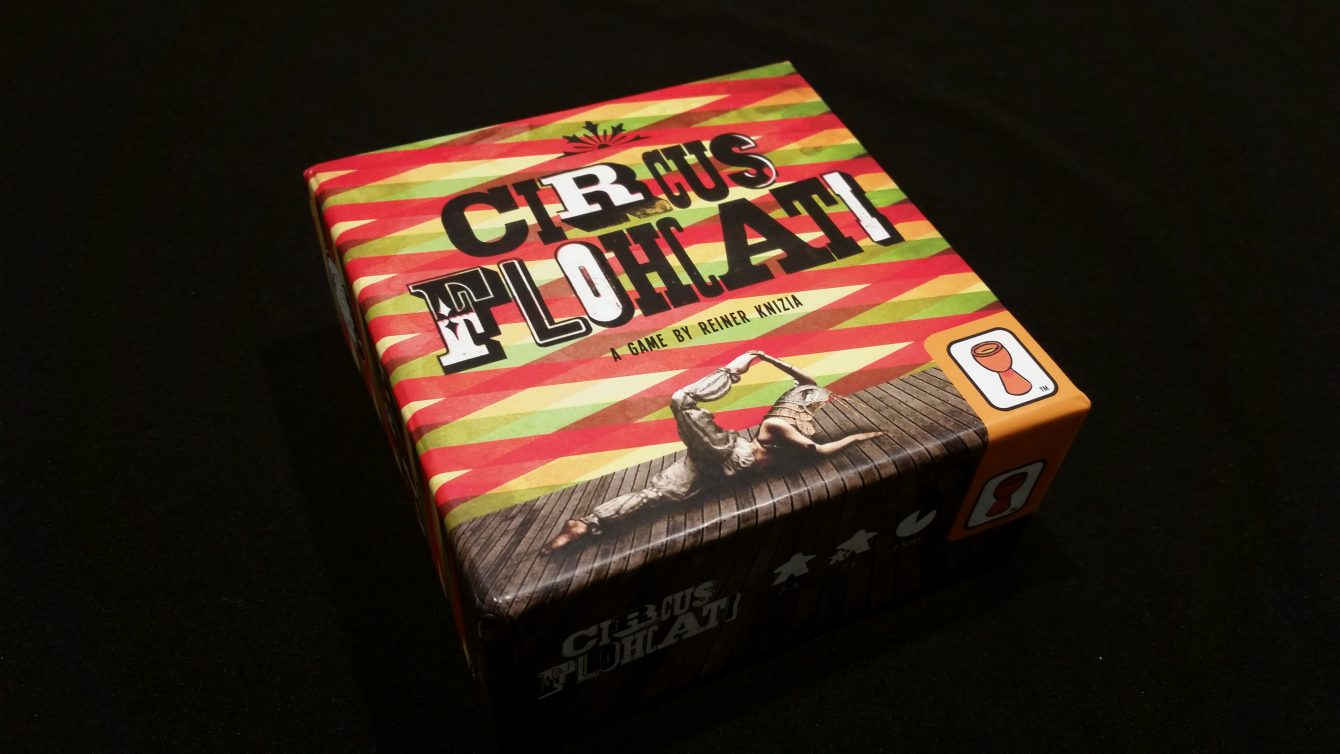 Sometimes, it’s easy for a small game to squeak by.  Honestly, it is; a small box, a modest price tag, a low run-time, these attributes can often forgive a less-than-stellar game, giving it space in a library or on a table that it would otherwise probably not be allowed to keep in the face of other, perhaps, better games.

On the other hand, like short-form fiction, sometimes the limited structure of a ‘small’ game can provide the perfect platform for a design that wouldn’t benefit from needless embellishment.  When games like these work well, they do more with less, delivering fun disproportionately to their components or even mechanical complexity.

Circus Flohcati, published by Grail Games (Too Many Cinderellas) and designed by the rather priceless Reiner Knizia, is a small game.  A member of Grail Games’ Mike Line (named for…Honestly, I have no idea), it comes in a small box, has a short runtime, and has a pricetag to match.  Does this simple push-your-luck filler squeak by like the tiny flea circus it depicts?  Or is there more to it than meets the eye?

The rules for Circus Flohcati are simplicity itself.  On your turn, you may draw as many or as few cards as you like, adding each in turn to the face-up row shared by all players, and then you must take one card from those available.  The push-your-luck aspect arrives in the form of busting, should you draw a second card from one of Circus Flohcati’s 10 (count ’em, 10) different suits.

Jess:  The theme here, of the flea circus, is as pasted-on as you get.  Each of the suits is a different circus act, but there is zero theme in the gameplay.  This may or may not bug you…get it?  Because

The goal is quite simply to make your personal circus worth the most points.  Scoring points works thusly:

Gameplay concludes when either someone puts on a Gala Show or the draw deck empties.  Along the way, there are 3 action cards that, when drawn, let players steal cards from each others’ hands or possibly dump lots of cards into the communal line, but that’s it as far as rules go.

Jess: Circus Flohcati is a simple game, but it’s actually a really great game for its weight.  When you first explained it, I was pretty sure it was going to be too simple to hold my attention, but it’s perfect for a 15-minute filler.

Andrew:  Yeah, the whole draw/bust mechanic, which makes you lose a turn and would otherwise annoy the crap out of me, isn’t so bad within the short timeframe.  And after all, nothing ever really forces you to draw cards.  You can always just take from what’s available.

Josh:  But think about it!  If you draw more cards, you might get some really high-value ones!  It always makes sense to draw!

Andrew:  Oh man, you and push-your-luck mechanics.  One day, I’m taking you to Vegas and watching you implode.

Josh:  I’d be the best at Vegas.  But at any rate, I agree that Circus Flohcati does a lot within its really small design space.  It’s really simple, but in the best way, and it is exactly what it needs to be without any embellishment.

Jess:  Although some people will undoubtedly find the art a little…squicky?

Andrew:  It didn’t bother me any, but I definitely had some players get grossed out by the flea-people.  I find them oddly charming, myself, and certainly not more off-putting than any other given circus-folk.

So the question is, do we recommend Circus Flohcati on its merits, or do we simply recommend it because at its size and price it does no harm?

Gladly, I can say the former is true. Circus Flohcati is a filler game.  It has no depth to speak of, but doesn’t pretend toward that aim either.  It’s a great game to take on the go; it’s a backpack game, a lunchtime game.  Taken for what it is, and if the flea people don’t distress you, then you can’t go wrong grabbing this little box and adding it to your collection (or your backpack).

(Gameosity was provided a review copy of this title, but was not otherwise compensated for this review)