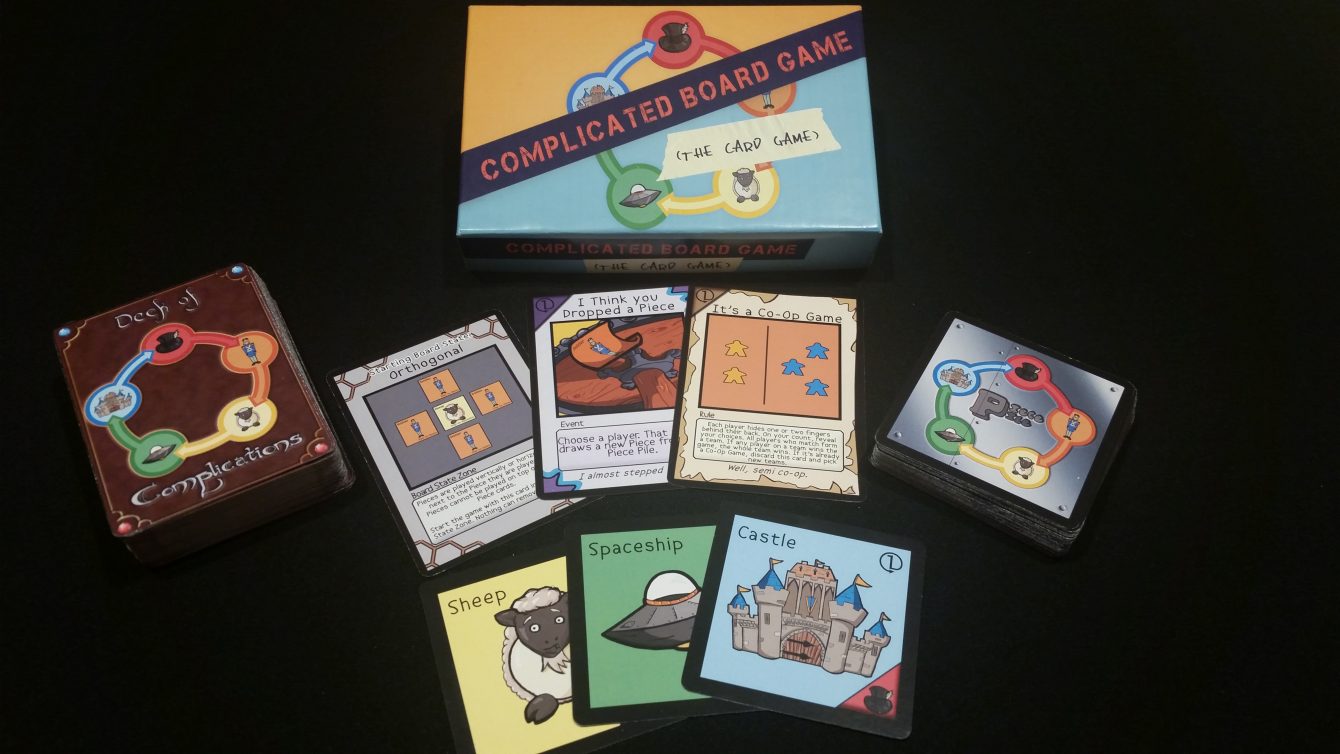 Up on Kickstarter right now with about a week left in its campaign, Complicated Board Game The Card Game (great title, but oh man, that’s getting abbreviated) is a, to quote the page, ‘Simple card game about a complicated board game’.  Designed by Pat Brennan and Jason Turner and illustrated by Jess Hough, Complicated Board Game The Card Game aims at being a light-weight fillery card game of variable mechanics and clever board game themed humor.  Does it succeed?  Or is it as generically fussy as its overlong name might suggest?  Let’s discuss.

**Kickstarter Prototype Heads Up – All pictures were taken from a prototype or stolen from the KS page, and may not be final** 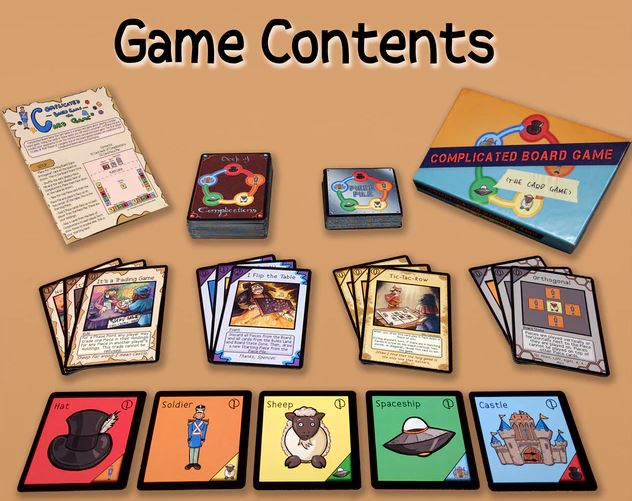 In Complicated Board Game (that’s still a little cumbersome…), each player will start with 5 face-up cards drawn randomly from the piece pile.  They also get 4 cards from the Complications deck.  The goal of the game is to be the first player to play all their Piece cards into the center…or possibly other goals, to be determined later.

Jess:  Wait, what was that last bit?

On each turn in CBGTCG (well that just looks a little silly), you will draw a card from the Deck of Complications and then spend up to two Phase Points, and those points can do two things.

Firstly, for a single Phase point, a player can place one of their Piece cards into the center (but only once per turn).  And it is here where the first of Confiscated Bread Game’s central theme (or gimmick, depending on how uncharitable you want to be) shows up.  At the beginning of the game, pieces can be placed orthagonally adjacent to other pieces, so long as you follow the rock-paper-scissors of the completely intuitive placement rules, which goes:

Again, at the beginning of the game, you must play orthagonally.  But pretty soon, someone is going to spend their Phase points on the other thing they can do – playing Complication cards.  And that will muck with everything.

Jess:  These cards are where the real meat (albeit lean, low-fat meat) of Complimentary Bard Game’s gameplay occurs.  Because these Complication cards either:

That last one, the Board State cards, changes how Piece cards are played into the center.  For example, Stacks changes the way cards are added, replacing the basic Orthagonal structure (now cards get added on top of the cards they are played on, rather than beside them.  Lane makes you add cards in lines, whereas Diagonal, well, obviously.

With each card that adds or removes rules or that changes the way Piece cards can be played, the game becomes more and more complex, complicating (thematically enough) the otherwise simple task of playing out your Piece cards for the win.

Andrew:  And that’s if no one manages to accomplish one of the secret goal cards they are holding, which can often end the game really unexpectedly.

Jess:  Or really jerkishly – remember that time we had the Co-op rules in play, and everyone was about to win together when all of a sudden you played the MVP goal and claimed the victory for you and you alone?

Josh:  That was the worst!  Especially since I could have won solo the round before, but you guilted me into a team victory! 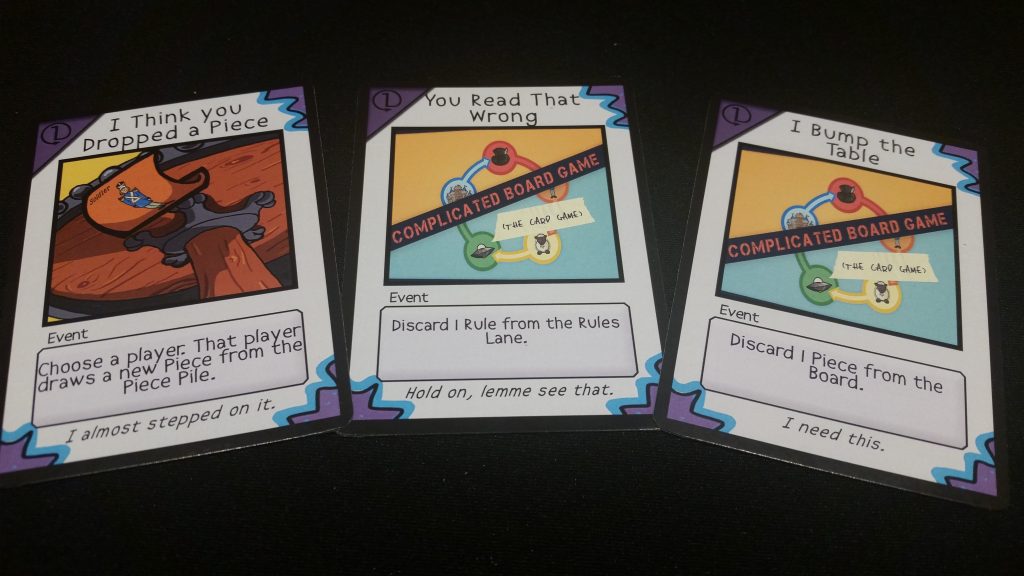 And there, right there, are the best moments in Coordinated Band Game.  When you mess with the rules, coming at the game from unexpected angles to win in clever ways, it is a lot of fun, especially because the humor of the cards is so board-game-centric, with the sort of in-jokes that veteran board gamers will definitely chuckle at.

But there are some issues.  Like many of the games like it (and there is at least one other game just like it, which I’ll get to), every player interaction is negative – anywhere from mildly annoying to ‘oh screw you’.  Also, as in the totally real example above, those clever manipulations of the rules to get you to win will make everyone else feel like a chump, especially since they often couldn’t have done anything to prevent or alter it (since your secret goals are, well, secret).  And the humor is fine, if you’re on the inside of boardgaming, but there are going to be plenty of folks who don’t find it all that funny, and that’s too bad.

Andrew:  But my biggest criticism of Condescending Beard Game is, ironically, that it is far too simple.

Jess:  I know exactly where you’re going with this.  I was hoping for a game where the rules shifted all the time in new and interesting ways, but the actual number of board state manipulations and (interesting) new rules is surprisingly low, since it’s really the game’s central concept.  A lot of them just make things fussy, rather than fun.

Josh:  Yeah!  There are only about 4 board state cards and most of the rules involve manipulations that don’t really change the way the game flows, but rather affect the meta, like giving players the ability to trade Piece cards or making sheep wild or whatever.

Andrew:  Though that Rule that states no one can say the word ‘Rule’ is pretty funny.  But yeah, I honestly feel like the game has a great concept, but in trying to keep it, well, simple, they kept it too simple.  They could have pushed it further and it would only have benefited.  But screw that Memory Game card, man.  That one’s the worst.

Josh:  That could work, sure.  They could add new rules, change things up-

Jess:  No, I mean I play ‘Expansion Pack’, so everyone has to draw an extra Piece card except me.

So, let’s address the elephant in the review.  Convoluted Broad Game bares some undeniable mechanical similarities to Fluxx.  For the uninitiated, Fluxx is a fast playing filler card game with ever-shifting rules and variable win conditions.  Sound familiar?  Well, the fact is, though Fluxx once occupied a staple slot in our game nights, we have long since retired it in favor of better, more satisfying games.

Andrew:  The good news is that, despite the similarities, this is definitely a better game than Fluxx.  For as random as it can be, it still holds together more as a game than Fluxx does.  It’s a perfectly adequate filler, for what it is.

Jess:  The bad news is that it is still very much a game like Fluxx, and that means if you don’t like one, you probably won’t like the other.

Josh:  Ironically, I feel like it would be a good game for less experienced, possibly younger boardgamers, but the rules changes can sometimes make it really hard for those exact sorts of players to engage.  But that’s one niche it could fill, with the right group.

So do we recommend Complicated Board Game The Card Game?  Well, yes, we do, mostly, but only for those who like this sort of take-thatish, ultra-light (except when it gets overly fussy), extremely specific style of gameplay.  For folks who do, CBGTCG will definitely be a fun addition to their rotation, and it will probably edge out other, Fluxxier games.

But for some, like us, it will just feel too basic once the novelty of the theme wears off, and it will be on to other, more filling fillers.

That said, we do absolutely recommend heading over to the Complicated Board Game Kickstarter page and giving it a look for yourselves.

(Gameosity was provided a prototype for this preview. We were not otherwise compensated.)