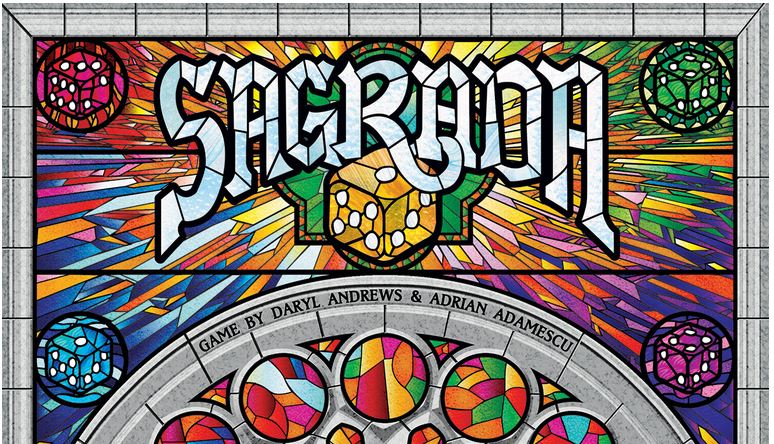 Sagrada is a dice-drafting and placement game for 2-4 players from Floodgate Games.  Up on KS now and at almost 200% funded, Sagrada , designed by Adrian Adamescu and Daryl Andrews, has its players acting as stained glass artisans (which is to say artisans making stained glass, not, like, made of stained glass), each trying to make the most beautiful, technically perfect piece they can manage within the game’s shockingly quick 10 rounds.  Is Sagrada the stunning experience its subject tends to be?  Or is it just a little too transparent to be any fun?  Let’s discuss!

**Prototype Alert – our prototype copy of Sagrada, sent to us by Floodgate Games, was a little on the rough side (asethetically), so we have stolen liberally from their Kickstarter campaign**

So, mechanically speaking, Sagrada is pure simplicity.  Each player begins the game by selecting which of the 4×5 window cards they will try to complete (the final game will have snazzy card holders which not only give your dice a place to socket but also are, well, snazzy).  Then, the lead player draws a certain number of dice (depending on player count) and rolls them.

Each turn, players may take a die and place it on their window (following the placement rules), and they may also use one of the tool cards randomly chosen at the beginning of the game to manipulate their dice or placement.  Each player takes 2 turns per round, and after 10 rounds the game is over.  At the end of the game, players will score points for their personal objectives as well as any public objectives, but will lose points for any blank spaces on their board.

Andrew:  Look, the reality is that the rules are so simple, they can be communicated completely in GIF form.  See?

Andrew:  So, cutting right to it, I think Sagrada is a good little game.  It’s simple – we played our first game within 3 minutes of opening the rules, and I love that about it.  But I also love how quick it is – every turn, you have the simple decision of where and how to add a die to your window, and that keeps things moving along.  The rules say 30-40 minutes, but maybe that’s for max player count; our 2 player games took less than half that.

Jess:  Yep, and it’s pretty, too.  Even our prototype had very nice dice, and even though we only had a sample of the player board holder thingies, I think they’ll look great once they are fully produced.  I liked the flow of the game, too, but there is the luck issue, which kinda sucks.

Andrew:  Yeah.  Normally, I don’t mind luck in games, and I certainly wasn’t troubled in this one-

Jess:  Because you always got exactly the dice that you needed?

Jess:  Yeah, it does suck when you have a turn where you literally can’t draft one of the rolled dice because of the adjacency restrictions.  It doesn’t happen a lot, and is more prone to happen toward the end of the game, but having to idle for an entire round while everyone else grabs dice isn’t the most fun.  On the other hand, that’s what the tools are intended to offset; they can give you better options when the dice fail you.  Not always, but often.

Sagrada is, despite its attractive appearance, a filler game when played with 2.  That shouldn’t be a mark against it – individual turns can sometimes be a little thinky as you strategize how best to use the dice and tools at your disposal, but generally speaking the game will move along at a nice steady clip and will be over before you know it.

Predictably, things get a little slower at higher player counts, but hardly – player interaction is virtually non-existent, aside from when a player drafts a piece you needed (and then ‘interaction’ is generally defined as ‘looking scornfully at them’.

Though it may be uncomplicated, we think that Sagrada is a really solid game.  It is attractive, accessible, and enjoyable, and totally worth checking out on Kickstarter now!

(A prototype of Sagrada was provided to us for this preview. Gameosity was not otherwise compensated.)