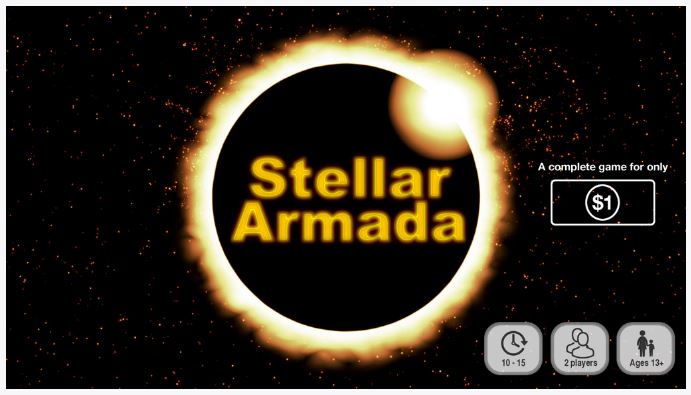 Stellar Armada is a tiny space-themed dice duel for two.  Up on Kickstarter now (and weeeeell over-funded), Stellar Armada is the first game designed and published by Jerason Banes.  Promising light, fast gameplay at a ludicrously low price, is Stellar Armada a capital ship of fun, or is it more of a runabout? 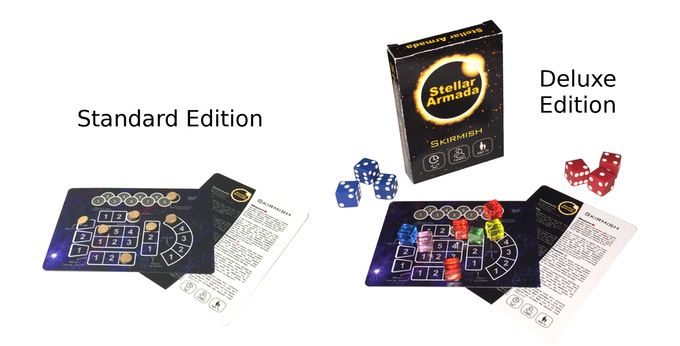 **Kickstarter Prototype Alert! – We received copies of both the deluxe and standard levels of Stellar Armada for preview.  We also stole pictures from the Kickstarter.**

Both players start with identical ships, and the goal of the game is simply to defeat your opponent before they manage to wreck your ship and blow up your reactor.  Your ship is divided into several systems, and each system serves a distinct purpose: 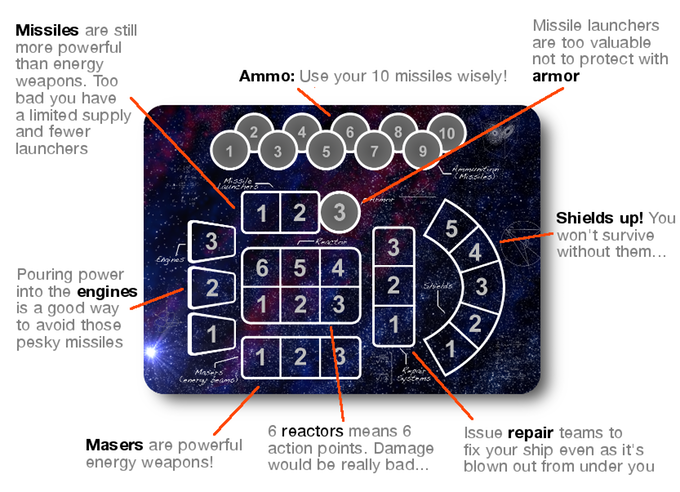 Each turn, you will receive as many action points as your reactor’s current health.  By spending those points, you are hoping to both attack your opponent’s ship successfully as well as make your ship less likely to blow up when your opponent attacks it.

Jess:  What I like here is that there is a balance.  If you throw all your action points into attacking, firing 3 masers and 2 missiles (the maximum your ship can manage in a turn), you may do great damage to your opponent.  But the fact is that, if they are still standing, they will have a much easier time pounding you to dust than if you spread out your actions, refilling your shield, boosting your engines, and affecting repairs.

Andrew:  Yep, that’s definitely true.  But you can’t win defensively; you really do need to attack as well.

Attacking works with a simple roll of the dice – each weapon you fire in a turn will be rolled for separately.  The target for success on these rolls is determined by your opponent’s engine – a 1 is always a failure, but each point spent on engines increases the difficulty of these rolls; with fully powered engines, weapons will only hit on a roll of 5 or 6.  Once a weapon hits, damage is first applied to the ship’s shields, if any, and then to one of the ship’s systems or weapons.  Each point of damage done to a system limits its function, and if a system goes offline, damage dealt to it will spill over onto the ship’s reactor.  Once the reactor is destroyed, the surviving player wins!

Andrew: Stellar Armada’s gameplay is quite simple, and each skirmish will be over in a matter of minutes.  And that’s good, because as soon as your ship starts taking damage, your action options, already fairly limited, will get even moreso.

Jess:  Yeah, we often found that the first player to land a solid hit or two was the winner, as the other player had to spend precious actions repairing systems and shoring up defenses, rather than just hitting back.  Being on your heels is a bad place to be in this game.

Andrew:  Especially once your reactor has taken a hit or two.  Less reactor health means less potential actions, and that means you’re dead.  Of course, dramatic reversals are always possible, but Stellar Armada is punchy and short, and that’s clearly by design.  If it were a more protracted game, it would definitely be less fun.

We think Stellar Armada is a neat, well-executed concept – a game with a very small footprint that can be played in a matter of minutes.  The biggest criticism we have, aside from the fact that an early lead almost guarantees victory, is that the graphics are somewhat overpacked onto the small cards – legibility was already improved during our time playtesting, but we do wish that the ship cards had quick rules summaries on the front, rather than the tough-to-read script on starfields that Banes settled on.  It would be less thematic, but a more schematic-like diagram with rules text would be more useful, especially since the actual rules are on the flip-side of the cards, you know, the ones you are using as your game board.  Just a touch inconvenient.

Now, we generally try not to talk about things like price on Gameosity, because what is ‘worth’ this or that many dollars is a subjective measure, for sure.  However, we would be completely remiss in not pointing out Stellar Armada’s ridiculous price-point.  A bare-bones copy of the game, with recycled cardboard bits instead of cubes and no dice, is a single dollar.  $1.  And the deluxe version, with acrylic cubes and six dice?  $5.  If we may be so bold, go ahead and splurge on the deluxe version; the little punched cardboard chits are functional, but the colored cubes, dice, and tuckbox make the deluxe version self-contained and easy to take with you.

The bottom line is, if you have one other person to play with (or more, or fewer; solo and 4 player rules are in the works), Stellar Armada will absolutely be a worthwhile little addition to your collection.

Head on over to the Stellar Armada Kickstarter page now, and snag a tiny box of space battle for yourself!

(This prototype was sent to us for preview.  Gameosity was not otherwise compensated.)