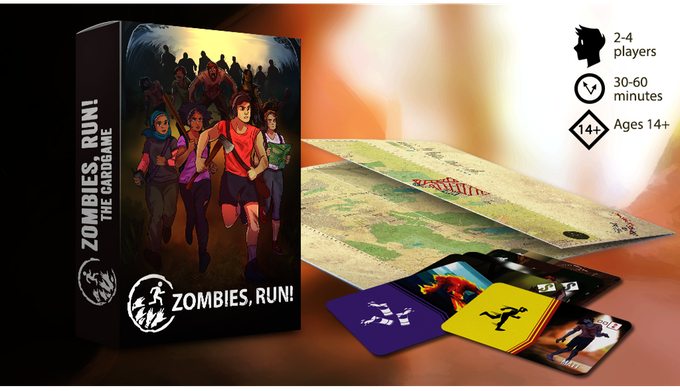 I run, but I wouldn’t consider my self a “runner” unless you are talking about the Zombies Run app. I use it to train for my 5K charity run every year. It is fun and good motivation to run as the app weaves a story fraught with man-eating, shambling danger around every corner and your only option for escape is to RUN!

Now Six to Start and Naomi Alderman are bringing that action to board games! On Kickstarter now, Zombies, Run! The Board Game is a 2-4 player audio adventure designed by Matt Wieteska (ZR Audio Director, Radio Abel writer), Adrian Hon (ZR Lead Designer), Alex Macmillan (ZR Developer), and illustrated by Kas Sweeney. Players will guide their survivor across the board rescuing survivors, searching for clues, and racing to find a cure.

A companion app helps tell the story with voice acting and undead-like zombie growls. Similar to the app for Dead of Winter, it will offer you choices that could save your life or destroy everything. The app will also tell you when to add more zombies to the board and when they shamble towards their goal.

In the game you get a dry-erase map to track your movements, 96 opportunity cards, 72 zombie cards, 5 zombie tracker cards, 18 close call cards, 18 weapon cards, and 4 characters. There is also an expansion called the Party Pack, which 96 more Opportunity Cards, 12 After Dark Zombie Cards (which have you drinking shots and doing stunts), and 24 Versus Mode Cards (which adds another team of runners you must compete against).

Jess: There is also a  premium edition, which adds artifacts and minis to help bring your game to life. 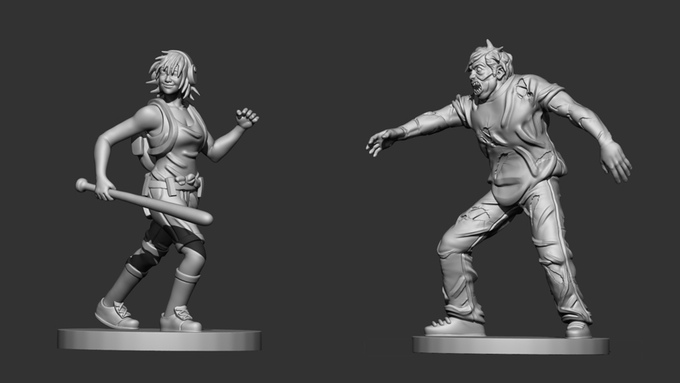 The standard game will run you about $34 on Kickstarter. The party pack level is $44 and if you are looking for the premium bits, you’ll be paying around $72. This seems like a lot, but this is also the first board game that  Six to Start has put together and the companion app does add a nice element to the game. Zombies, Run! The Board Game has 28 days (zombie reference ftw) left to go and is already pretty close to funding. Shuffle on over to the Zombies, Run! Kickstarter to learn more.