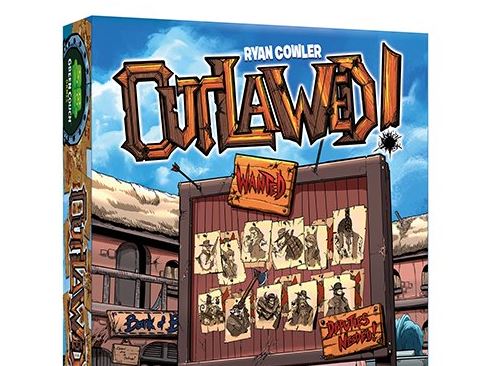 Bluffing games are sort of a polarizing genre, in my observation.  There are folks who absolutely revel in the challenge – out-thinking your opponents, making big plays on little more than intuition and clever, subtle manipulation, and falling prey to your opponents’ machinations.  And some players can’t stand bluffing games for more or less those exact same reasons.

OutLawed!, up on Kickstarter now, is a bluffing game from Green Couch Games (Avalanche At Yeti Mountain, Rocky Road a la Mode).  Designed by Ryan Cowler, this western-themed card game sets 2-4 players against each other as bounty hunters in Bandit Bluff, a town full of anthropomorphic animal criminals with prices on their heads.  To quote the Kickstarter, with “a little lying, some stealthy scheming, and the good sense to know a good time to tell the truth”, players will try to be the one who bags the biggest bounties and claims the title of deputy!

**Kickstarter Prototype Notice – Green Couch Games sent us a prototype for preview, so all the media displayed will either be from that or stolen from their KS campaign.**

Each game of OutLawed! works like this.  Players start with near-identical hands of cards (one secretly set aside to facilitate bluffing).  Each card represents a bounty, and each bounty can only be caught under unique circumstances (explained on the card).  Players each take one card from their hand and place it face down, and then announce what that card is.

Jess:  And now we’ve gotten to the bluffing bit.  Of course, you don’t have to tell the truth about which card you’ve played.  In fact, there are plenty of times you will want to lie your butt off, because you will often need to manipulate the other players into playing certain cards, or playing a certain way, which will let you score your bounty.

Once everyone has played their card and made their claim, everyone flips and results are compared.  Each player assesses whether the conditions for capturing their bounty were met – if so, into the score pile they go.  If not, back into your hand to be tried again later.  Gameplay continues until someone bags their 7th bounty, at which point scores are totaled and a deputy is crowned.

Andrew:  Then why do I want this stupid job again?

The key to OutLawed!‘s gameplay is in the way cards interact with each other.  You will nearly always need at least one other player to play a certain way (lie, tell the truth) or play a certain card for you to claim your card.  So it’s on you to try to figure out how to make those circumstances come about.  Good at reading the table?  You’ll do great.  Clueless about what makes everyone else tick?  Well, you’re in for a rough night.

Andrew:  To be honest, we’re all pretty in-between on bluffing as a mechanism.  It can be a lot of fun, but it can also be frustrating and arbitrary, and there is sometimes little that a player can do to improve their lot.  I was really surprised that OutLawed! plays 2 players – I can’t think of another bluffing game that claims to work with so low a player count.

Jess:  With good reason, actually.  I didn’t really care for OutLawed! at the 2-player mark.  Sure, it works, technically, but the spirit of the exercise wasn’t there, and it was just too easy.

Andrew:  You mean impossible, right?  I barely scored anything!

OutLawed! is a much better game at 3 and 4 players.  More players mean more opportunities to score and more bluffing and manipulating.  The game really opened up when we had a full compliment, and there was lots of fun to be had there – it’s quick, portable, and, once the minor learning curve is overcome, it can be a real blast.

Fun as it is, OutLawed! isn’t without its weaknesses, though.  Some of the cards are disproportionately difficult to capture.  Sure, these cards feature higher rewards as compensation, but it is entirely possible for players to end up with a handful of cards that they can literally never score, due to nothing more than the order in which other players play their own cards.  It can be very frustrating, in that regard, because it takes a game about being clever and makes it instead about being lucky.

Andrew:  Of course, luck is a huge part of this light filler, and that’s fine, but man, getting stuck with that stupid tiger because everyone else has already capped their lions is infuriating.

Jess:  But Lionel Manesworth can only be claimed if you are honest about playing him, meaning you warn everyone else at the table that you’re playing him!  It’s honestly silly to not be able to capture Duke Tigre.

Andrew:  I want you to consider for a moment, Jessica, that it is entirely possible that I am crap at bluffing games.

While it may not be for everyone, OutLawed! is an excellent little filler to have in your arsenal.  Like all of Green Couch’s titles, it is small, portable, quick, and solid, hitting the table in moments and running its course in 10-15 minutes.

You’ve got less than a week to get in on the OutLawed! Kickstarter campaign.  Head on over there now and see if this filler is your kinda fibber!

(Gameosity was provided with a prototype for this preview.  We were not otherwise compensated)