I won’t equivocate: Gameosity loves The Captain Is Dead.  We’re huge fans of the game’s tough-as-nails difficulty, its complete cooperative play, and its capricious willingness to lay waste to even the most well-considered tactical choices.  Produced by The Gamecrafter and designed by Joe Price and JT Smith, we’ve reviewed The Captain Is Dead as well as its sequel-expansion, Episode 2: Adrift.  It’s fine, I’ll wait here while you catch up.

**Obvious prototype alert! – The Gamecrafter sent us this pre-production copy for preview, so all shots are either of that or lifted from their Kickstarter campaign.**

Now that you’re up to speed, we have had the pleasure of playtesting the newest episode of TCID, thanks to our friends at The Gamecrafter.  Episode 3: Lockdown takes place after the stalwart crew has managed to navigate the deadly asteroid belt, only to have their ship taken hold of by invading aliens.  Captured and locked in the medbay, the crew of the ship must stealthily slip past the guards, retake the ship’s systems, and ultimately restore their own control over the vessel.

This is all, of course, easier said than done.  Trapped and outnumbered as they are, the crew must be careful not to alert the aliens to their attempts.  And with each passing turn, more aliens will board the ship, and not all of these are the relatively manageable as the lowly grunts our heroes have fought in the past…

Lockdown introduces a whole pile of new stuff to TCID.  Instead of the Warp Core (that perpetually offline focus of the previous two episodes), we are instead trying to restore ship control.  And instead of an ever-waning shield which strains under the assault of enemy blasters or rogue meteors, Lockdown features a Concealment meter which dips every time the crew does something risky, and which must be maintained lest the invaders uncover their ruse and end the game, shall we say, prematurely.

To go along with the new theme, Lockdown provides components which are substituted in for those found in the base TCID game.  Clever large card overlays are used to change the core and shields to their new meters, as well as provide at-a-glance rules explanations.

A completely new threat deck, replete with deadly surprises for players to face, including the appearance of several new types of aliens, each of which follows different rules and harass the players in unique ways, from triggering alarms to stalking them through the halls.

Of course, the players have been given some new options for dealing with the alien menace as well.  Grenades and traps have been added to their arsenal, and a new type of skill card has been added, which acts as a wild.  Further, a few new characters, including an alien sympathizer and a hacker, all bring the flavor of Lockdown to the fore. 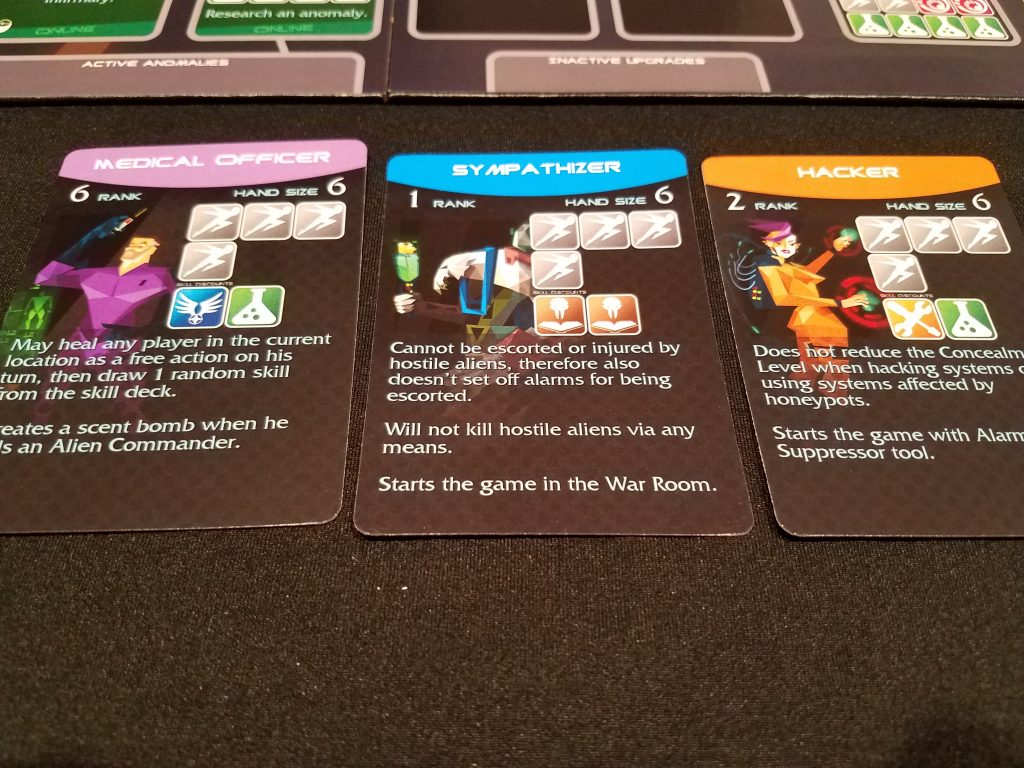 However, that said, Lockdown is still the same TCID experience.  If you love the base game, Lockdown provides another chapter in the ongoing story and creates tense, dynamic experiences on the board.  If TCID isn’t your thing, Lockdown probably won’t be the expansion that sells you on it.  The new elements, patrolling aliens, stealth tactics, and an expanded arsenal (particularly the ‘contraband’ mechanic, which lets you get a bit of a boost when you are captured) are really neat, but in some ways don’t innovate much on the formula.

Don’t get me wrong, we still throw TCID a lot of love, but more than anything, we wanted even more divergence from the core TCID experience in Lockdown.  The patrolling aliens, for example, are a fantastic start, but their route is fairly limited and the consequences for running into them isn’t particularly dire or interesting – just a threat to be mitigated, and therefore consume your limited actions per turn.  We would have loved to have seen even more extrapolation, since the core game is so strong and this is already the second expansion.

That said, we did feel the gameplay was a bit more tactical this time around, which we really appreciated.  Even without reinventing the game (which is fine, actually, given how much we enjoy the original), Lockdown is satisfyingly tense, as aliens will inconveniently patrol right into your path or warp in a technician to shut down a system you desperately needed operational.  The threat deck is as hand-wringingly evil as ever, and we love it.

All in all, Lockdown is a solid expansion.  It may not be groundbreaking, but it feels unique enough that it is definitely distinct from is predecessors.  What it has going for it is tight, often incredibly difficult cooperative gameplay and more of the staggeringly good art from Gaetani Leonardi.  It may just be a bit more of the same, but it’s more of the same of a game we really like, so no real complaints there.

Head on over to the The Captain Is Dead Episode 3: Lockdown Kickstarter to check out what they have going on over there.  There are bundle packages that make it easy to jump on to this excellent co-op game now, including pledge levels to get the core game and both expansions all at once.

(Gameosity was provided a prototype for this preview. We were not otherwise compensated.)