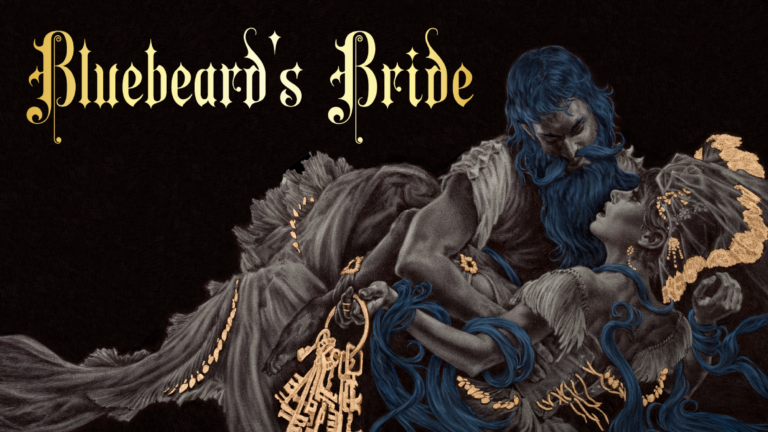 Jess: We love to play RPGs here at Gameosity HQ;forming parties to hunt down badass monsters, rolling dice to determine our successes, and bringing our characters to life. So what happens when everyone is playing the same character? Or, at least, parts of her?

Bluebeard’s Bride, produced by Magpie Games, is an investigatory-horror tabletop RPG on Kickstarter right now. If you know the story of Bluebeard, you know , it’s really a story about his bride. She explores her husband’s mansion until she comes to the forbidden room. She enters it against Bluebeards command and finds his brutally murdered stash of previous wives. In the RPG you and your friends will play aspects of the Bride’s psyche as she searches her new home, with the ultimate goal of deciding to open that last fateful door.

This unique set-up allows player to take on the five different aspects of the Bride: Animus (strength and will), Fatale (sensuality), Mother (authority), Virgin (warmth and obedience), and Witch (magic).

The house changes with the decisions of the players. As each player will give their own flavor to their part of the Bride, their choices will change how they experience each room, lending Bluebeard’s Bride a lot of replayability.

The game was designed by designed by Whitney Beltrán, Marissa Kelly, and Sarah Richardson. According to Whitney,

“This game came about because of a game jam for women two years ago at Gen Con. Myself and Sarah Richardson were complete strangers. We were sat at the same table and went through an exercise of what kind of game we wanted to make for the jam. We discussed our background and I mentioned that I had a Masters degree in mythology. She said that she loved fairy tales. That narrowed it down for us. Then I came up with the idea to do Bluebeard, and we settled on it. At that point, Marissa came in as a facilitator to help us decide how to structure the mechanics. She was helping run the jam. By the end of that hour though all three of us were gripped by what we came up with. We thought we had something special, and when we pitched it to the room, everyone there agreed with us. We decided right then and there to make the game. Two years later, and here we are!”

Bluebeard’s Bride uses the Apocalypse system (Apocalypse World, Dungeon World, Monsterhearts, Masks) which boils down all of your main actions to either description or a roll of two six-sided dice. We actually play the system a lot and it is a refreshing take on gaming for someone who is used to D&D 3.5 with its’ heavy handed rules and inflexibility (by the way the new D&D is a lot of fun!). 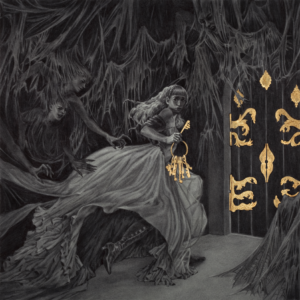 The kickstarter campaign has described the game as being an “Adult feminine horror fiction like Crimson Peak, American Horror Story, or The Company of Wolves, making it fun for horror fans and dark fairy tale fans alike.” The Apocalypse system focuses much more on storytelling than mechanics and lets players immerse more fully in the story and that’s very important when you are trying to tell a horror story.

The Kickstarter is offering the 8″ x 8″ hardbound copy of Bluebeard’s Bride, as well as PDF digital download copies of the Bluebeard’s Bride main book, the Book of Rooms, and PDF stretch goals for $50. You can pay less if you are only interested in the PDFs, but if you want a super deluxe version that comes with customized Bluebeard’s Bride dice, tokens, and a Deck of Objects, then prepare to pay $100.

The campaign has already blown past its $5,000 goal, having raised $40,452 so far. This means you can look forward to receiving the, so far, 11 unlocked stretch goals. I’m betting they will be unlocking the rest before the end of the campaign. If you back the game at any level you can download the rules to try it out. I’m very keen to check this out as I love a good horror story.You can learn more about Bluebeard’s Bride on Kickstarter.