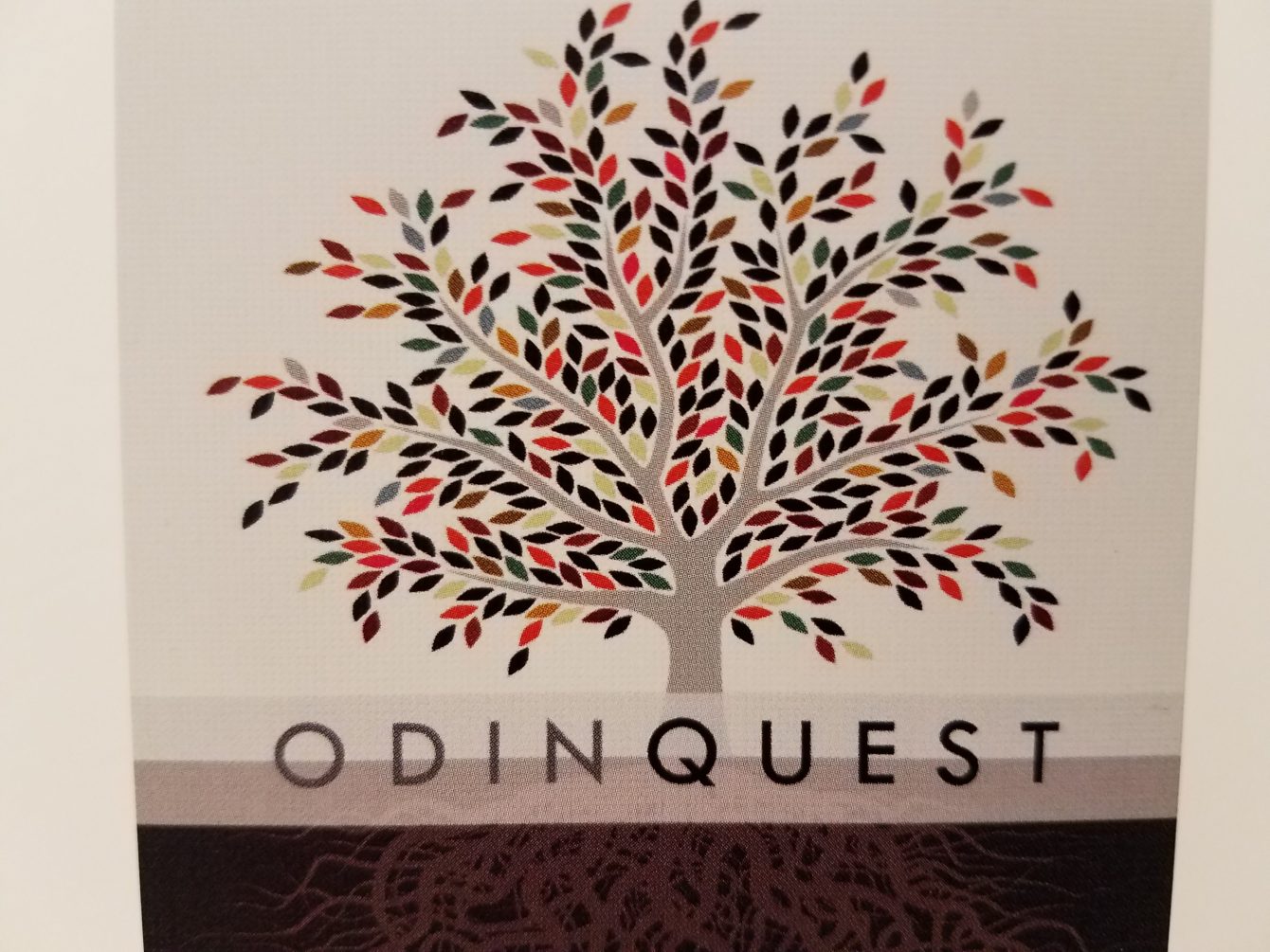 Odin Quest drew my attention, initially, for one simple reason.  The aesthetic, created by the game’s lone designer Todd Sanders, is staggering in its beauty.  Honestly, I saw an image of it on Twitter and I immediately sought him out, eager to learn more about this game.  Call me superficial, but sometimes one look is all it takes.

When my copy arrived, generously provided by Mr. Sanders, I spent a great deal of time simply flipping through the gorgeous deck of tarot-sized cards.  Each piece is unique, featuring such an immersive and vivid vision of the world that the storyteller in me, conditioned by nearly two decades of roleplaying games, couldn’t help but begin to draw out the tales that this deck of cards might tell.

As I shuffled the cards into their various piles and settle them into their circular arrangement for the first time (an entirely optional layout, which is as thematically-appropriate as it is disrespectful of your table-space), I found myself wondering if the mechanics could possibly live up to the promise that Odin Quest’s aesthetics are promising.

Odin Quest is a solitaire game; it uses a combination of cards, dice, and tokens to let a single player take on a perilous journey and face down a gauntlet of foes as they attempt to regain control of the 9 realms of Norse mythology and save the world from the impending Ragnarok – really, as paint-by-numbers a plot as there is in the whole Norse mythos.  Whatever is lacking in originality (at least as far as the source material goes) is more than made up for in the flavor of the experience.  As you travel from realm to realm, previously unknown cards get flipped over, revealing potential allies or foes to be overcome.  Your hero has a finite reserve of resources in the form of cardinal virtue cards, each of which will provide dice and bonuses useful for overcoming foes.

Some of these cards provide huge benefits, like adding several dice to your dice pool, and make encounters totally manageable.  However, once cards are used, they are dropped unceremoniously into a discard pile, not to be drawn again until you have milled through your entire hand – including other, measurably inferior cards.  Worse, some of your best cards will remove themselves from the game upon use.

It is in the balance between these powerful cards and their less-useful counterparts that forms the gameplay core of Odin Quest.  The game is a puzzle, an occasionally tough-as-nails one, where you will need to overcome each challenge with as few resources as you think you can get away with.  By only leaning on the weakest of your cards, you can carefully grind away the weakness from your hand, leaving you with powerful cards when faced with powerful challenges.  However, each play is a gamble – aim too low and you will suffer the consequences of failure in lost cards and increasing difficulty.

Odin Quest ends one of two ways.  Should you clear all 9 realms (easier said than done) and still have 3 or more virtue cards in your and and/or discard pile, then you have won!  You can tally up a score (based on the final state of the board) should you feel the need to know how winning your victory actually was, or you can do what I do and just pat yourself on the back for making it through.

However, should you ever have less than 3 cards at your disposal, or if enemies and events scatter too many Omen tokens about, then the game immediately comes crashing down and you are defeated.  No score, just shame.

Odin Quest does a lot right.  As I can’t stop mentioning, I’m infatuated with the game’s aesthetics.  I enjoy the puzzly challenge of its design, working always to make you cringe with each roll of the dice.  In a very real way, Odin Quest manages to capture the core of that Ragnarok story I so dismissively called ‘by the numbers’ a few paragraphs ago; the game’s core is of dwindling hope in the face of mounting odds, of beings of tremendous power and virtue simply running out of time in their desperate bid to avert foretold disaster.  Fickle fate, and all that – It’s all in here.

There are some nit-picks.  I found the rules to be oddly dense – the game uses some keywords and lots of icons, and until you absorb them, it can be a little challenging to figure out exactly what you are meant to be doing at any given time (a ‘how to play’ video would help immensely, and maybe that’s a project I’ll tackle in the future).  The icons themselves, too, represent a minor issue – you will find yourself constantly checking the cheat card (thankfully, there is a cheat card) in your first few games.

And of course, there is the looming specter of luck, the eternal curse of dice-driven conflict games everywhere, which can turn a delicately-planned action into a spiraling disaster, seemingly through no fault of your own.  And the luck factor reaches beyond the dice, as the appearance of certain foes together, or the absence of valuable allies at critical moments, can make the game feel almost unwinnable.

That all said, I honestly love the game, and in some ways specifically for many of the criticisms I just made.  Once you have the icons down, each card benefits so much from their simple, graphic presentation that I would lament bricks of text in their place.  And as I mention, I find the chaotic nature of the dice, mitigated by smart plays, to be right at home with the theme and feel of the game.  Sometimes the hand of fate is against you, and in the realm of Norse myth, it frequently was.

My final recommendation? Odin Quest is an excellent game in many, many ways.  It provides visual splendor, challenging gameplay, and a surprisingly immersive experience, if one is inclined toward appreciating its source material. 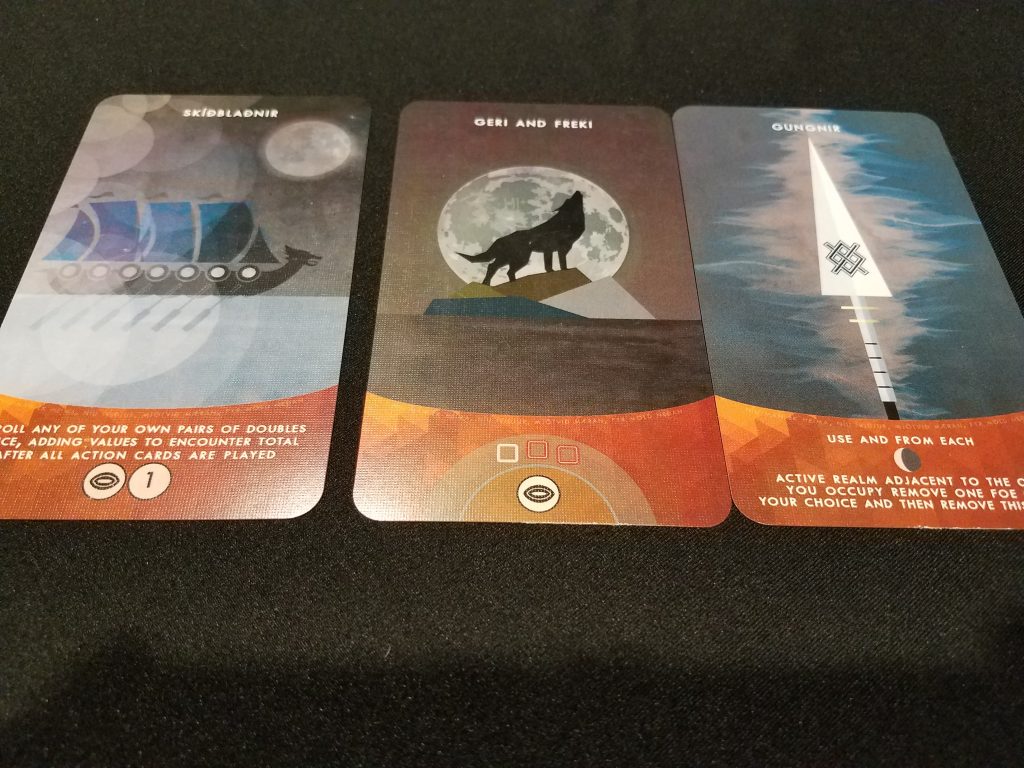 Odin Quest, for all its incredible aesthetic appeal, is a print-on-demand game, not available at retail.  Todd Sanders has made the source files available, for FREE, on Board Game Geek; all you need to do is print them out, cut them, provide dice and tokens, and get to playing.  You can also order a professionally printed deck here, though you will still need to handle your own dice and tokens.  Finally, Todd Sanders, despite his incredible propensity toward prolific design, is also easily reachable on Twitter and via email – I am certain that he would be more than happy to answer any questions you may have about getting or playing this excellent solitaire game.

(Gameosity was provided a review copy of this game.  We were not otherwise compensated.)

5 thoughts on “Odin Quest – A Lone Journey Against Ragnarok”