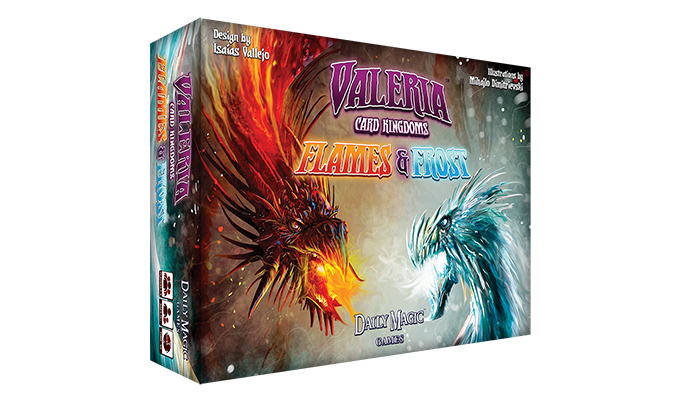 Flame & Frost is a 'more of everything' expansion for Valeria:Card Kingdoms.  It introduces a new card type, Agents, and adds more of every other kind of card in the game.  The tone is slightly more aggressive than the base game, with more negative player interactions, but never crosses into full-on 'take-that' territory.

Back when we reviewed Valeria: Card Kingdoms, we said 2 things (ok, I said 11 minutes worth of things, but, you know, stay with me): that we absolutely loved the game, and that it was simply ripe with possibilities for expansions.  No surprise, then, that Daily Magic Games has unleashed onto Kickstarter Flame & Frost, the first large expansion to Valeria Card Kingdoms.  With 3 days to go, it has way more than funded, demolishing over a dozen stretch goals and adding a ton of content.

**Kickstarter Prototype Thingie – we were sent a nice PnP set from Daily Magic games for preview.  All pictures are either of that set or stolen from their KS page.  Everything is subject to change, but probably won’t.

The core gameplay is still the same; you will build your kingdom, activate citizens, conquer monsters, and look to accrue more victory points than your opponents.  Most importantly, you will still have a great time staying engaged with the on-turn/off-turn structure that Valeria established, where everyone’s roll matters to everyone.

Flame & Frost adds more of everything that makes Valeria so much fun – a whole pile of new citizens to add to your tableau, monsters from the far north and south of the kingdom (fitting the elemental theme of the expansion), new dukes, new events, new domains, and even an entirely new category of card, Agents, which will change your strategy and options.

First and foremost, the expanded citizenry of Flame & Frost makes for excellent tactical gameplay.  Citizens like the Summoner generate one kind of resource on-turn, and an entirely different kind of resource off-turn.  In the Summoner’s case, there is a natural synergy between these – activate off-turn to generate some magic at the cost of warfare, activate on-turn to spend some magic to generate warfare.  With some good luck, this card can, all by itself, machine out tons of resources.

Then there are cards like the Sorceress, which introduce one of the new symbols for the Flame & Frost expansion: wild resources.  On-turn she generates a magic and another resource of your choice.  Off-turn, spend a magic to get two of anything you like!

Jess:  I love the new citizens! And the best part is that they’re balanced alongside the other cards from the base game, and are designed to be thrown in the mix along with them. Flame & Frost hugely expands the possible combinations of citizens so that each game of Valeria you play can have even more variety!

Andrew:  I especially love the citizens that set up these natural synergies.  Nothing feels slicker than when you can pull off one of those internal combos.

The new domains introduce one of the new mechanics that Flame & Frost brings to Valeria – banishment.  For the first time, you will be able to force cards out of your opponents’ tableaus, permanently removing them from the game.  We personally didn’t love this mechanic, but it only shows up on a couple of cards and isn’t something you can do repeatedly – mostly just one-off effects as soon as a player purchases the domain.  Otherwise, the new domains are excellent – we especially loved Flame Tongue Fountain, which generates magic whenever anyone rolls doubles, and Rime Temple, which lets you pay coins for VPs every turn (a potentially powerful mid-to-late-game strategy).

The new monsters are fun, presenting a pretty standard array of challenge/reward combinations.  Several allow you to immediately take Citizens as rewards or let you decide which resource you get for beating them, so that’s neat.  Mostly, we remain infatuated with the consistently amazing artwork in Valeria, and it really comes through on the monster cards.

Finally, the newest feature of Flame & Frost are the Agent cards.  These sit in a stack beside the offer, with several face-up at any given time.  On your turn, you can hire an available Agent for its cost and then immediately activate that Agent’s effect.  Agents cause all kinds of things to happen – some, like the Captain or the Treasurer, let you convert currency to VPs.  Others, like the Sapper or the Assassin, let you disable the effects of citizens and even domains belonging to your opponents.  Once an Agent is activated, it is placed at the bottom of the Agent deck, to be redrawn once you run through the rest of the cards.

Andrew:  The Agents are simultaneously my favorite and least favorite aspect of Fire & Frost.  They give you an additional option for how to spend your resources, and I love the whole 1-time effect thing; unlike all that fantastic tableau-building, there is no randomness in activating an Agent – you get exactly what you pay for.

Jess:  Yeah!  But a few of them are pretty attacky, which isn’t ever going to be our favorite part of anything.

Andrew:  Still, they are a cool addition to the game, and honestly, as a module, you could easily leave them off if you didn’t want to play with them.  But I think we’ll likely keep them in, most of the time.

Flame & Frost is definitely a worthy first expansion to what is already an excellent game.  In some ways, it is a ‘more of the same’-style expansion, which simply offers a plethora of new options for every facet of the core game.  However, some of the new cards and concepts introduced are anywhere from perfectly good to excellent, with only our personal distaste for direct contention mildly coloring our reception of the expansion in its entirety.

If you enjoy Valeria: Card Kingdoms as much as we do, we can wholeheartedly recommend Flame & Frost; it simply gives you so much more to play with.  Daily Magic Games has done another fantastic job with this one – head on over to their Kickstarter now and snag yourself a copy!

(Gameosity was provided a prototype for this preview, and were promised a copy of the final product at our request.  We were not otherwise compensated.)