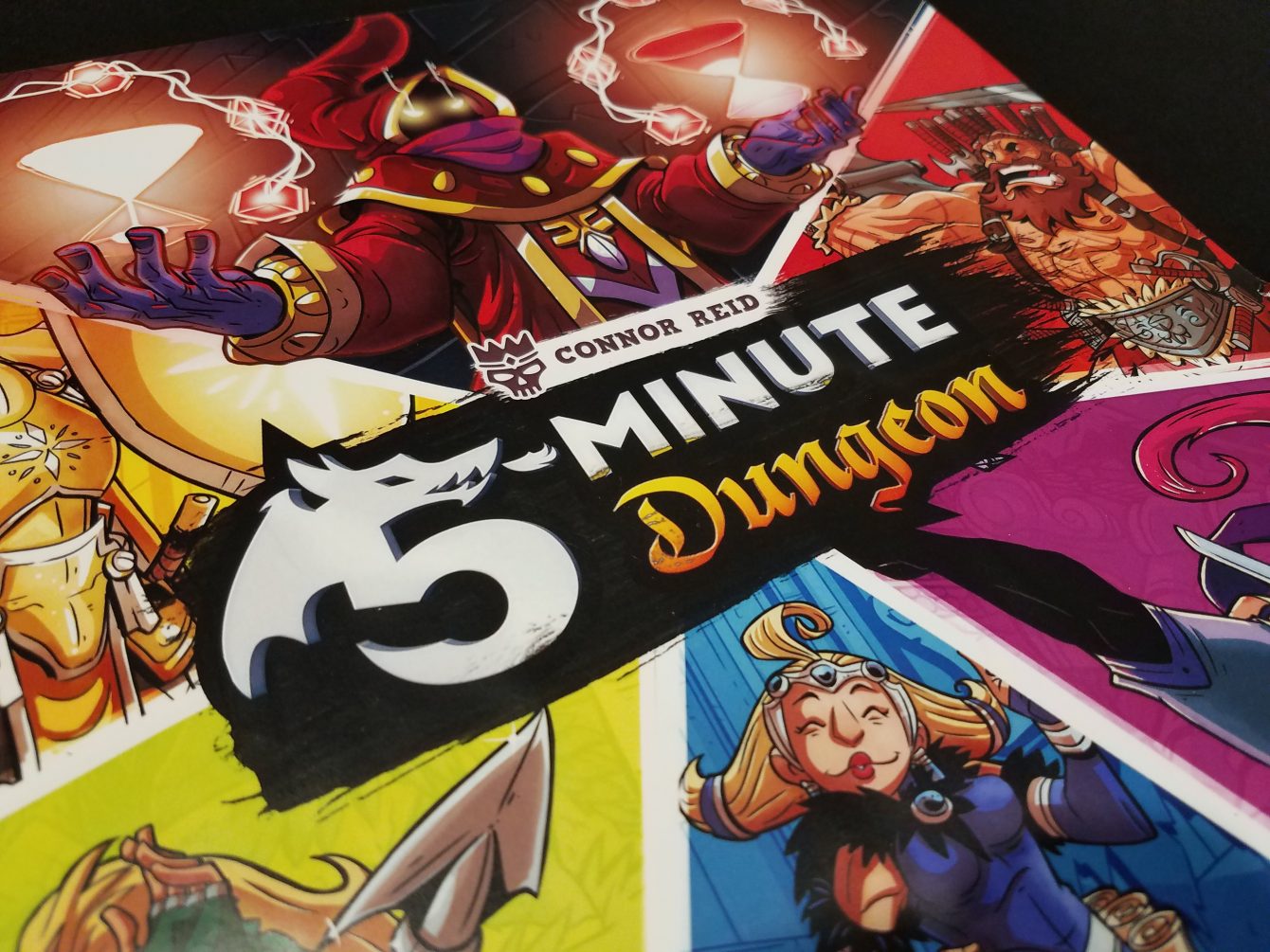 5-Minute Dungeon is a great little blitz of a dungeon scrambler.  As a tight co-op filler it's fantastic, and it's got great artwork besides.

5-Minute Dungeon, from Wiggles 3D, is up on Kickstarter right now.  Go back it.  Now.

Andrew:  Ok, fine.  But you get to shuffling in the meantime; I want to play again!

**Kickstarter Advisory – We were provided a prototype for this preview, so all pictures are either of that or stolen from the KS page.**

5-Minute Dungeon is a light-wight, real-time, co-op, hand management game (gasp, wheeze).  Each session, which lasts exactly, you guessed it, 5 minutes, has players blitzing their way through a deck of dungeon cards, rife with monsters and enemies and obstacles.

Like any good dungeon crawl (frantic dungeon scramble, really – you crawl, you die), the goal of 5-Minute Dungeon is to smash your way to the bottom of the deck and confront the boss.  Manage to mash that monster’s face in?  Everyone wins!  But fail anywhere along the way or run out of time and it’s a total party loss, no two ways about it.

Jess:  So, the first cool thing about 5-Minute Dungeon is the art.  It’s got a fantastic aesthetic; Alex Diochon’s work is always amazing and it really shines here!

Andrew:  Absolutely!  And the game also has a phenomenal sense of humor.  I mean, the ‘Exactly 26 Ninjas’?  ‘Lots and Lots of Zombies’? ‘A Straight-Up Ghost’?  The art and names are so funny it’s really a shame you’ll be screaming past them as fast as you can possibly manage.

Jess:  And the character and boss art are no less awesome!  I love ‘A Freakin’ Dragon’, and the fact that we get male and female heroes, each with different powers and really fantastic art is so awesome.

The flow of the game is dead simple – each player takes their character’s deck of cards, draws a handful, and gets the timer ready.  As soon as you flip the first dungeon card, the clock starts ticking and all players must collaborate to produce the necessary symbols to defeat each card as it comes up.

Player powers can be used at any time and there are no turns – everyone just starts talking and playing cards at once in a sort of chaotic symphony of dungeon destruction. 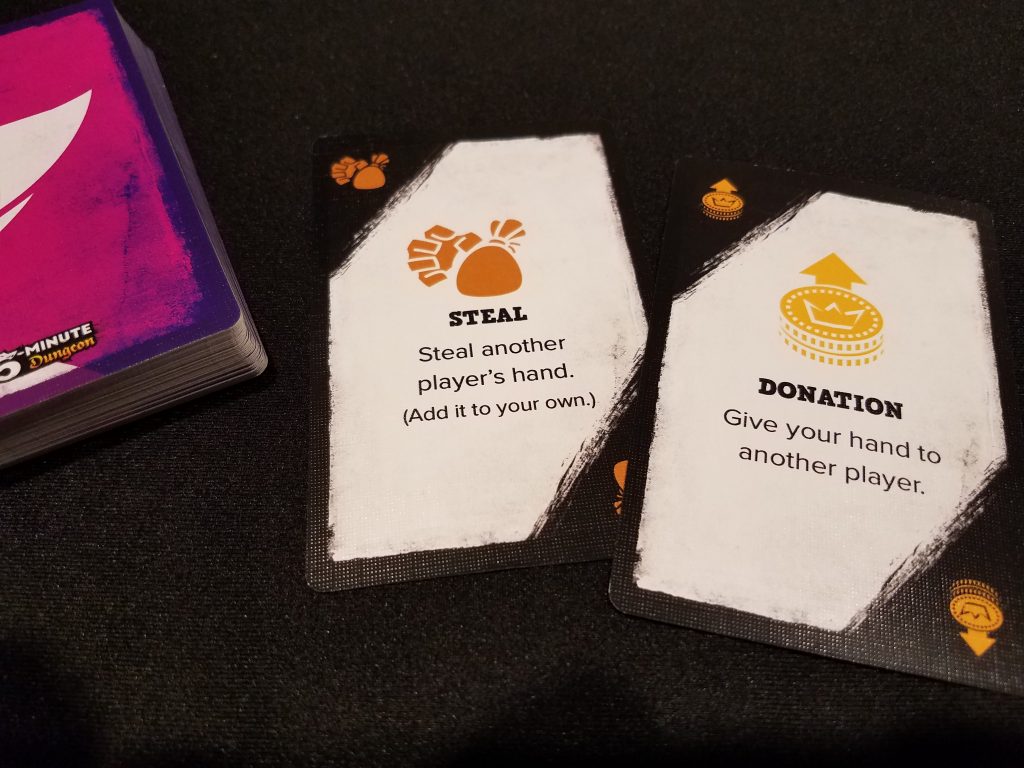 Every time the group produces enough symbols to defeat a card (or beats it with one of their effect cards or player powers), the next card in the dungeon is flipped over and the process continues.  If you can manage to mill through the entire dungeon deck, all that is left between you and victory is the often super-tough boss…and of course that ticking timer that has been running the whole time. 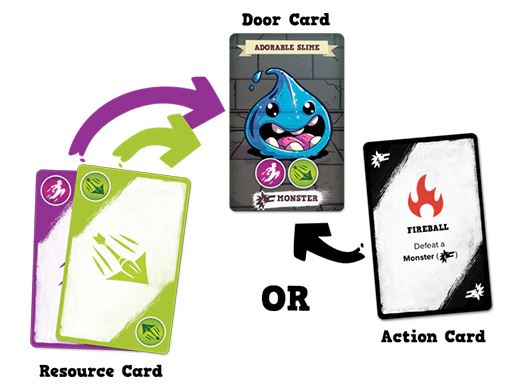 Andrew:  The wide array of characters is another great part of the game.  Sure, several of them are sort of generic ‘Defeat this type of encounter’ power and many of them relate to card drawing, but what may seem uninteresting in theory is amazing in practice – how many times did we succeed only because we cleverly found ways to draw cards faster or blast a Rosetta Stone Golem when we didn’t have the symbols to beat it?

Jess:  Definitely!  Our first game, no one took any powers that helped us draw cards.  That…wasn’t so awesome.

Like so many co-op games, there is only one victory condition – beat the boss – but a couple of different ways to lose.  Of course, if you run out of time, you’re dead.  Likewise, if all players run out of cards before beating the boss, it’s also game over.

However, another way to lose is if you encounter a card, any card, that you can’t beat.  Need jump symbols, don’t have any, and none of your player powers can help?  Well, you’ve just lost.  The fact that this can happen a minute into your 5 minute game feels rather…I don’t know.  Deflating.  All that fantastic energy the game builds can come crashing to a halt in a most unsatisfying way, just because you encountered A Cactus That Wants A Hug and you simply can’t produce the 3 Shields necessary to bypass it.

Jess:  Yeah, that can be a little sucky.  ‘Deflating’ is probably the right word, too; we’re humming along, frantically throwing cards around and blasting our way through the dungeon, when all of a sudden we slam into An Invisible Wall and the game’s over.  But of course, we can’t stop giggling because it’s literally an invisible wall.

Andrew:  Heh, yep, and of course a reset is just a quick card shuffle away, and then we’re back into it!

There are some things that 5-Minute Dungeon isn’t:  It isn’t deep or complex, though that isn’t to say it’s mindless; sometimes you have to be clever with the order that cards get played to avoid the dreaded dead-stop. It isn’t for folks looking to play quietly or calmly, either.  But with a heaping helping of fun art, lots of humor, and enough gameplay and tension to keep everyone flinging cards and laughing along, 5-Minute Dungeon is a truly solid filler with production quality that makes it even more desirable.

So like I said, get yourself over to the 5-Minute Dungeon Kickstarter and get yourself this fantastic light-weight game!

(Gameosity was provided a prototype for this preview, as well as a complete version of the game upon our request.  We were not otherwise compensated.)