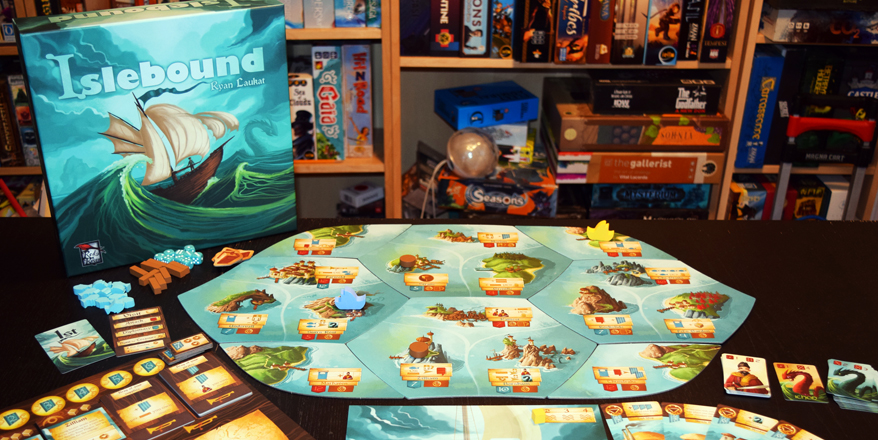 An area control game from the story rich world of Ryan Laukat. Characters can be combined with another title in the series: Above & Below giving the game an added expansion element.

I’m a sucker for any game that tells a story, so Ryan Laukat’s games really appeal to me. They all seem to occur in the same universe, where humans live alongside magical creatures, visit mystical places, and find adventure around every corner. Ryan is a one-man band; designing and illustrating his own games under the name Red Raven Games and he’s really damn good at it.

Andrew:  Absolutely true!  Everything of his I’ve played has been good, from the simple area control of 8 Minute Empire: Legends to the fantastic storytelling exploration of Above & Below.  And all that goodness carries into one of his newest titles, Islebound.

Islebound is a 2-4 player area control game where you represent a seafaring nation looking to spread your influence and build a glorious city. If you have played Above & Below then a lot about the game will feel familiar.

Andrew:  They’re by no means the same game, but as you mentioned, all of Red Raven titles feel like they share similar DNA.

Jess:  Exactly!  And that’s a great thing, because that means they’ve all got great aesthetics and really accessible design.

The basic premise is that you and your fellow players are sailing around a bunch of islands (represented by some pretty lovely, modular board tiles) trying to gain resources, crew members, and money so that you can purchase buildings to add to your tableau, all in the name of gaining the most Renown by the end of the game. Once a player has constructed 8 structures, the endgame is triggered and everyone tally’s up their points to see who won.

Each island offers different benefits for visiting; some provide resources, while others let you convert those resources to buildings, crew, or even victory points.  However, every time you land in a port, you must pay at least a coin, and coins spent this way cleverly accrue in a pile which any player can spend their whole turn claiming.  This little closed economy is a neat way of helping players catch up when they find themselves low on cash.

Jess:  But maybe you don’t want to fork over coins every time you stop to pick up fish or whatever.  Maybe you’d rather have other players pay you for the privilege of stopping at these ports.  Well, good news!  Just throw some giant sea monsters at them!

Every island can be claimed, coming under the control of one player at  a time; the owning player can stop at that island for free, and each other player must instead pay them to use that space going forward.  Islands are claimed either through diplomatic means (paying cubes off the Influence track, which accrues as you accomplish certain goals) or through military might.

When attacking an island, you decide how many Pirate and/or Sea Monster cards you are committing.  Each card you commit lets you roll a die, and each die that meets or exceeds one of the target numbers on the cards generates attack strength.  If your strength meets or exceeds the island’s defenses, it’s yours!…until someone else grabs it.

Andrew: The combat is straightforward but satisfying, though rolling like crap on 6 sea monsters is heartbreaking in a way that I can’t quite describe.

Jess:  Hehe, anyone who has ever thrown dice knows that pain!  Still, you can stack the odds in your favor by bringing in a lot of pirates or sea monsters to help.  And you can always send your crew into battle to compensate for sad rolls, though an injured crew takes twice as many rests (which is to say 2) than an exhausted one to come back to fighting form.

Each building you construct also offers ongoing benefits, but unlike the islands, these only benefit the owner (and can’t be taken away). You can purchase a building with coins on your turn as a free action or visit the isle of Stratic to build one using your resources.

Andrew: Islebound isn’t quite a point salad, but you do have tons of opportunities to set up cool synergies.

Jess: Yeah!  In our last game I was able to buy a few buildings that gave me more Renown points the more buildings I acquired, making it really profitable to build. I also bought a building which gave me a ton of Renown for attacking my opponent’s islands.

Andrew:  Yeah, I noticed, thanks for that.

Another important aspect in the game is influence. You gain it through quests that will appear on random islands, moving around the board as players accomplish these quests. Similar to Above and Below, the quests all have a bit of flavor text that help tell the fantastical story of the world.

The influence track is really clever, too, with players pushing each other along, rather than just having a static rating independent of each other.

Jess:  It’s true that being clever with your timing will make you a force to be reckoned with in-game, but the game itself does have a little bit of a ‘time’ issue.  Even though this big gorgeous board can be set up for 4, it really drags at max player count.

Andrew:  Ooooh yeah.  At 4, Islebound can be what we call a ‘sandwich’ game (as in, take your turn, go make and eat a sandwich, come back and take another turn).  Of course, that’s hugely down to how analysis paralysis-prone your players are, but somehow the plethora of options that Islebound presents ground our games to a crawl with too many.

Jess:  But it is excellent at 2, and certainly isn’t broken at 3 or 4.  We just prefer it at lower counts.  Of course, you lose a bit of area contention, which is a fun part of the game, but your mileage may vary!

Islebound has an added benefit, thanks to that shared Red Raven Games DNA we mentioned before. The workers you can hire are double sided: 1 side for Islebound and the other for Above & Below.  This interactivity between Red Raven games makes me think that perhaps they would make for a great legacy campaign.

Jess:  I think you could play Islebound (nations searching for a home), Above and Below (you’ve found your home, now build it), and then perhaps Near and Far (the official sequel to Above & Below). You could probably find some way of carrying over a benefit from winning a previous game like starting with an extra coin or fish.

Andrew:  Heh, that’s actually a great idea – you could even follow it up with The Ancient World to show how your civilization eventually fares as it develops, and even play Artifacts Inc. as a far-future investigation into your society after it’s decline!

Jess:  That’s, like, two days worth of gaming.  And it sounds awesome! 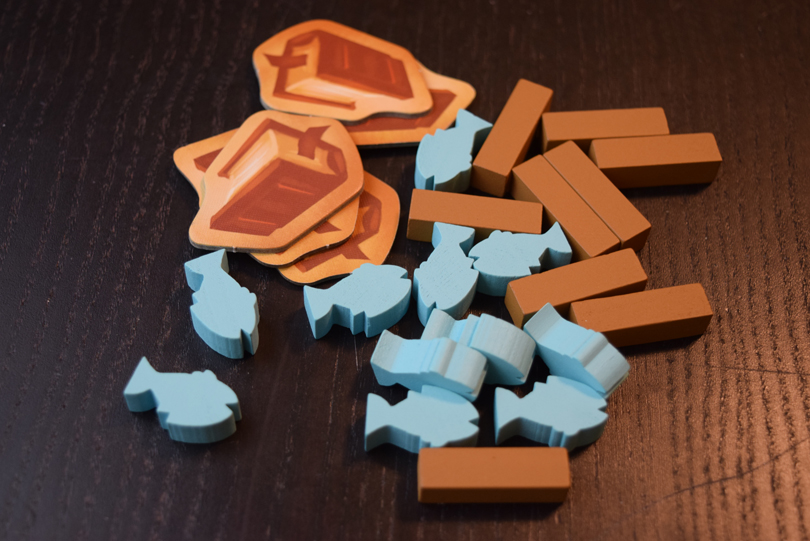 On its own or as part of a larger universe, Islebound is fantastic! The art design is beautiful, the bits are chunky and fun to play with, and the adventure cards tell some really interesting snippets of story.

And beyond all that, the gameplay itself is satisfying and tight, with lots of paths to victory points and the ability to change plans fairly easily mid-game.

Once again, Ryan Laukat proves himself to be an excellent designer.  If you’re a fan of his games, Islebound is a fantastic addition to his catalog, and if you are unfamiliar with his games, this is an excellent jumping-on point!