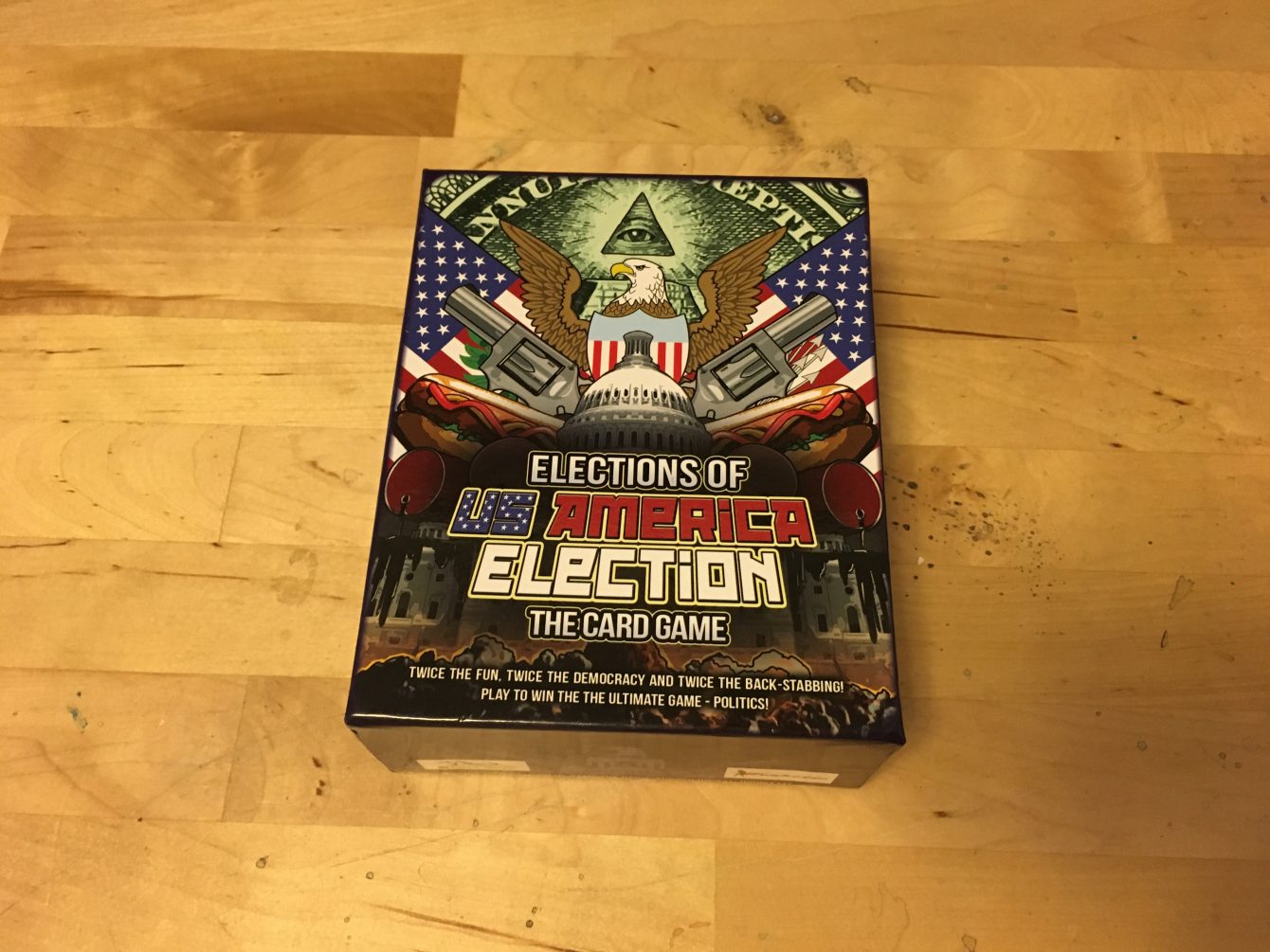 Elections of US America Election: The Card Game is way more entertaining of a political commentary/joke card game than it really ought to be.  Full of Take That opportunities, it still manages to stay light enough that even people like us, who normally don't enjoy shanking each other could get into it because, hey, that's politics!

’Tis the season for vitriolic political “discussions” and tons of conjecture. Yay. But it doesn’t have to be entirely about losing Facebook friends and tirelessly cross-referencing news stories on Snopes; we can actually have a little fun with it, too. At least that’s the idea behind Elections of US America Election: The Card Game (yes, it’s really called that), from designer Dr. Tomas Rawlings and publishers Auroch Digital and Wonkette.

Andrew: A Take That card game, which is a mechanic none of us really enjoy, based on the US presidential elections.

Elections (because I’m not typing the rest of that name out again if I can help it) is an ultimately simple game about a very not simple system. Every player is a presidential candidate, and they all have to try and win more electoral votes than their opponents by attracting voters (Republican, Independent, Democrat) and winning the majority in various states. Things like candidate appeal with each group of voters, home states, and a candidate’s individual advantages (i.e. special abilities) all play a part, as does the cards everyone can play to give themselves an edge or screw over their rivals.

One of the more interesting aspects of Elections, and one of its saving graces as far as I’m concerned, is that it makes fun of almost everybody. No matter who your candidate is or which voters you’re fighting over, chances are the game will take a jab or two at them. Some more than others, because some candidates give comedians more fodder and some are squid-faced elder gods who want to devour the universe so how do you really joke about that, but no matter your political interests (or disinterests), there’s plenty of stuff to have a chuckle over. And yes, Cthulhu is a possible candidate. He can eat his staffers.

Andrew: Me either. It’s the sort of thing that could have easily ended up being too crass, too blatant, too one-sided, or too subtle. They managed to hit a pretty solid sweet spot here.

Diana: I think a lot of it has to do with the scenarios these cards can lead to. Like when I was playing as Cthulhu and tried to completely destroy everyone’s campaign progress. Because I mean I was Cthulhu. Cthulhu would totally do that sort of thing.

Rob: Exactly. Or like that time Andrew, as Abraham Lincoln, stole one of my staffers and severely hampered my ability to earn votes. Then I got back at him by-

Andrew: You made people think I was the Zodiac Killer!

Rob: I did. And it was really funny.

Andrew: Okay, fine, you got me there.

This is Elections’ other big strength: how the absurdity makes the Take That gameplay actually fun and not a painful, potentially friendship-ending affair. You kind of want to get annoyed, but it’s hard to manage that when there’s so much goofy going on around you. Plus when you have elder gods, founding fathers, and current runners as potential candidates it can lead to some fantastically humorous situations. My solo test run (there is no solo mode, I was just awkwardly playing against myself) was Bernie Sanders against Cthulhu, and Bernie actually wiped the floor with the ancient one.

Elections does still have a few weaknesses, though. A big one is the rulebook, which is missing a lot of very important specifics when it comes to things like attracting voters. More detailed rules and information is available online, but that’s not always an option when you’re sitting down to play a board game. Or at the very least it’s kind of annoying to have to search somewhere other than in the provided rules when you’re trying to figure out how to play your game.

The cards also have a few problems, though some of them might be addressed in later printings. None of it is game-breaking or anything like that, but I did find a couple of cards that were missing the useful iconography that’s meant to help players keep track of how much influence over the various parties they have. I’m also not sure why the two kinds of State cards (Large and Small) had to look so similar when so many other card backs can be easily distinguished from one another. It’s super easy to sort the Wonks (cards you play against other players or on yourself) from the Candidates from the Voters from the Scandals (bad stuff), but the only difference between card backs for the two state sizes is the size of the titles. In other words “Large States” appears bigger than “Small States.” I feel like anything – a different colored bar behind the text, a slightly different background image, or just whatever else – would have made sorting through these cards far more easy. It’s not a huge deal, but it does bug me when virtually every other card type is so much easier to tell apart at a glance.

Andrew: You know, I had way more fun with this than I was expecting.

Jess: Me, too! It was just so… silly. I couldn’t help but enjoy it, especially how some of the cards require you, the player, to do something like stand up and plead the fifth when you use them.

Diana: And I was Cthulhu! I don’t think I’ll ever get tired of that.

Rob: I don’t think any of us will.

Andrew: But yeah, this was a lot of goofy fun, and I immediately though of how good it would be as a light board game night meetup title. Considering how much we all tend to shy away from or outright dislike Take That games, I’m not sure I can think of a better way to express how enjoyable it is.

It’s worth noting that our group stuck with the “short” game variant, in which players are competing to see who can earn 70 electoral votes first. In a full game, they play to 270. It’s entirely possible that a full game would have left us feeling differently, but we knew going in that it would’ve taken an hour or more to finish so we decided to go the quicker route. For us, the faster game was a great fit; but if you’re looking for something that will take a bit longer that’s also an option.

There’s another mode that’s available when you include the small expansion set, which is meant to emulate more of a full US election cycle. Four players (no more, no less) compete as usual but the states come up in a set order and there are always two Republican and two Democrat candidates. Once the initial competition is over, the winner from each party becomes the presidential nominee while the loser becomes their running mate. Then it’s a two team cooperative race to become the next president. While we never had the chance to try this mode for ourselves, it does seem interesting (and rather time consuming). So yeah, it’s another variant for you to enjoy.

Normally I’d say your enjoyment of Elections of US America Election: The Card Game depends on how you feel about Take That stuff, but it’s far less of a factor, I think. Really it’s just a goofy, entertaining, simpler than it looks card game about running for president – and encountering some pretty bizarre and memorable situations along the way. If any of that sounds like something you and your friends might have fun with, you should definitely check it out.