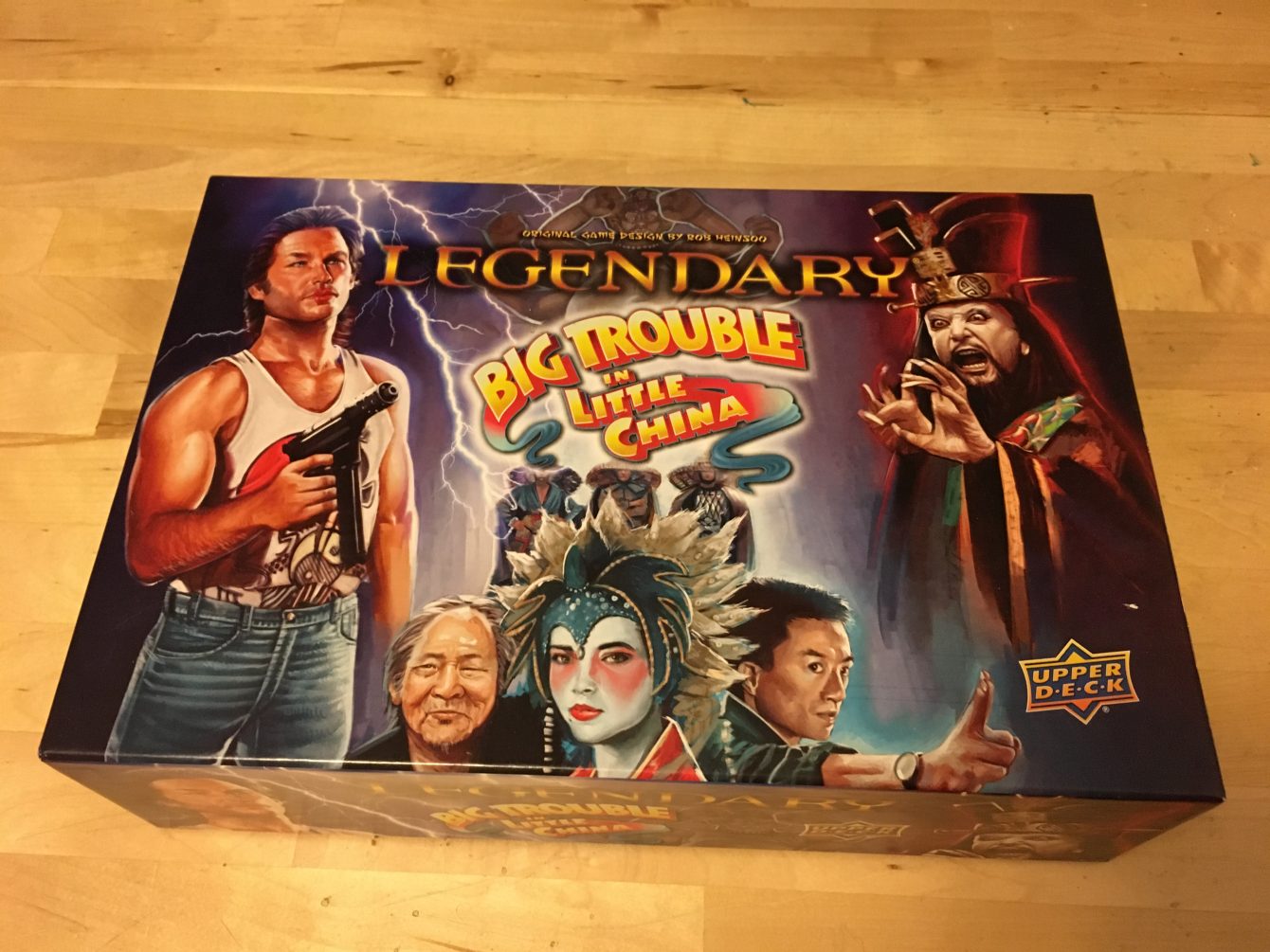 Legendary: Big Trouble In Little China is a fun deckbuilder with good mechanics and some great art, but it doesn't quite have the thematic penetration we've come to love in the Legendary Encounters series (worth noting, it's not in the Encounters series).

Legendary Encounters, specifically the Alien version, is one heck of an enjoyable and thematic deck builder. Big Trouble in Little China is one heck of a fun and ridiculous (in a good way) movie. So of course it’s easy to love Legendary: Big Trouble in Little China, a deck builder based on the cult classic film from designer Rob Heinsoo and publisher Upper Deck, right? Well sort of. It’s definitely a good time, but “love” may be too strong a word for it.

Diana: A deck builder that pulls from the Legendary series.

Diana: A deck builder that pulls from the Legendary series and is based on John Carpenter’s 1986 classic about a clueless action hero of a truck driver who gets pulled into a good versus evil battle of the ages while passing through China Town in San Francisco, which also happens to be a movie that you adore.

Diana: And you don’t love it?

Rob: Not exactly, no.

Legendary: Big Trouble in Little China is based on the original Legendary system and not the one for Legendary Encounters. I know it seems nitpicky but the differences do carry some weight. For instance, players no longer have a health pool to maintain. Instead, they will occasionally have to add wounds to their deck, which pretty much just exist to clog up their hand and make being helpful in later turns more difficult. Another difference is that most regular enemies don’t attack players, but rather make it more difficult to combat the game’s chosen Mastermind (i.e. primary antagonist).

Regular enemies are also trying to escape the city rather than rush into a combat zone where they can deal players damage. Sometimes they might bring an innocent bystander along as well, which doesn’t really do anything except give players more points if they defeat that enemy. Oh yeah, there are points. Apparently even though everyone is working together to take down the Mastermind, they’re also trying to earn more points than everyone else by defeating bad guys and rescuing bystanders. Because reasons.

Diana: That definitely felt pointless to me. I mean we’re all trying to stop the Mastermind and we all lose if the scheme succeeds, so why would we bother competing over points?

Rob: It just felt superfluous. Like having the personal goals in Dead of Winter when you’re not a traitor. What’s the point? I care way more about us actually surviving to the end than I do about who had the most points when the dust settles.

Diana: We didn’t even bother to count after our last game, did we?

Rob: Nope, and I honestly don’t feel like we missed out on anything. I mean I suppose you could argue that it sort of fits thematically when you consider the campy 80s action hero feeling of the movie, but game-wise I just couldn’t bring myself to care about scores.

It turns out, theme is actually the problem with Legendary: Big Trouble in Little China. While previous games in the series (Legendary Encounters games, anyway) always managed to feel, mechanically, like the movies they were trying to tie into, this one just doesn’t. The characters are there and represented; notable villains are present and accounted for; the artwork from Mike Thompson, Zazo Aguiar, J R Baker, Jude Beers, Daniel Dahl, Gianluca Gugliotta, Mike McGee, and Tom Walker is all great; but there isn’t anything to the gameplay that really felt like playing Big Trouble in Little China.

Diana: It was pretty great how the Jack’s truck was counted as a hero character, though. I thought that was pretty funny.

Rob: Oh I loved that! But at the same time it made me sad, because I didn’t see that level of clever nods to the movie anywhere else in the game’s mechanics.

Diana: The way some of the cards played into different characters’ personalities and their role in the movie was decent.

Rob: Decent, sure, but nothing really jumped out at me as being particularly Big Trouble in Little China-themed. If you took away all the artwork and replaced it with superheroes, it wouldn’t feel any different.

None of this is to say that Legendary: Big Trouble in Little China is bad, though. It’s not. In fact, it’s a lot of fun! But it was kind of disappointing to find that it didn’t convey the theme of its subject as well as any of the Legendary Encounters spin-offs. Or at all, really. It’s definitely a deck builder worth playing if you haven’t dabbled in anything from the Legendary series, but if your shelf space is limited you might want to get ahold of the Alien, Predator, or Firefly version instead.

(Gameosity received a copy of this title for review. We were not otherwise compensated)