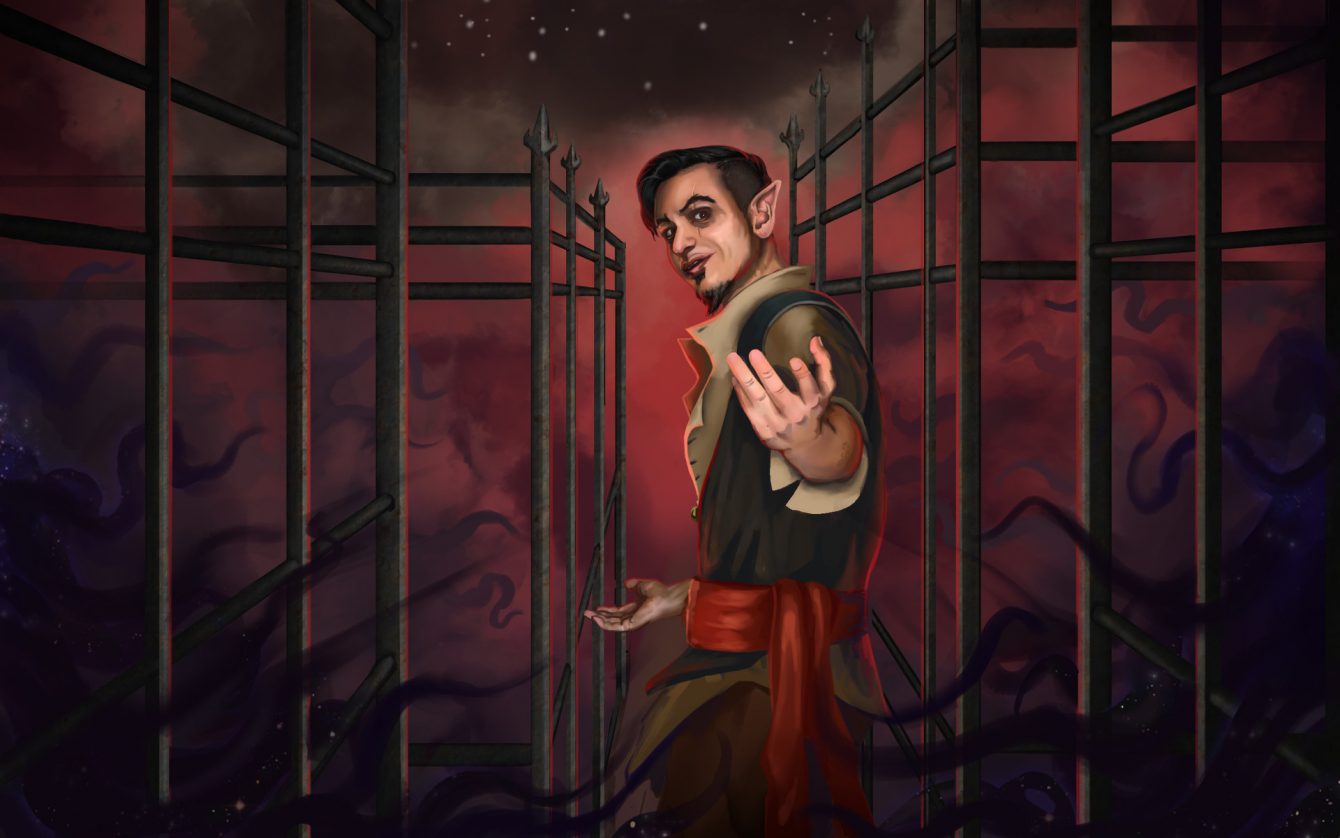 Welcome back to Masterpiece Meeple Corner! This month we are sitting down with Nolan Nasser, the brilliant artist who has worked on the fantastic games Fate of the Elder Gods and New Bedford just to name a couple.

Diana: Nolan, thank you so much sitting down with us today. For starters, how did you first get started creating art for board games?

Nolan: In 2014 a friend sent me a call for artists that Greater than Games had put out looking for artists for Spirit island. That ended up being my first gig in the gaming industry, and it could not have been a better introduction. They’re an absolutely fantastic company to work for. The best part about this is the friend that sent me the call for artists is friends with Christopher Badell (one of the owners of GtG) and my friend offered to put in a good word for me with him. So this whole time I’m sitting here thinking I lucked into this position because I happened to know someone. Well I asked Christopher when I met him in 2015, and he looked shocked as he had never heard from our mutual friend and in fact had no idea we had a mutual friend. They had hired me just based on my skill and resume, which felt incredible to find out!

Diana: Awesome! So what has been your most challenging project so far? What made it difficult?

Nolan: Far and away the most challenging project to do art for was Fate of the Elder Gods. That’s mostly because there’s already a ton of amazing games with really incredible art in that genre and setting. So I felt like I really had to turn it up to 11 with the artwork I was creating in order to even compete in the lovecraft realm. Luckily the design of the game was already pretty different which allowed for some really fun art exploration. It’s also a big help that Chris Kirkman and Darrell Louder are fantastic art directors, artists and people in general!

Diana: Besides your work on game art, what else do you create? Do you keep a daily sketchbook?

Nolan: Oh this is such a good question! I do not keep a daily sketchbook, however I do work on a personal project as often as possible. I’m writing and world building for an IP that’s been in development. I keep a journal full of notes and sketches for that. I just finished my most recent painting for that project, Minastera.

Diana: When did you first realize you wanted to be an artist? Do you have any formal schooling/art education?

Nolan: Drawing has been a passion of mine since I was young. There’s a few artists in my family which inspired me at a young age to pursue it. However upon getting to college I convinced myself there was no way I could compete in the world of illustration so I studied web design and interactive design for 4 years. In my 5th year of college, I realized that wasn’t at all what I wanted to do and promptly started teaching myself how to digitally paint. I’d go to my web design classes and admittedly just read tutorials and articles on painting through them, then rush home on my lunch breaks to watch Youtube tutorials, while scarfing down my lunch. It was a really inspired and unforgettable time in my life.

Diana: What kinds of board games do you like to play? Any favorites?

Nolan: SO many favorites! It’s always hard to narrow them down. I’ll admit I come from a competitive MtG background so I always have a soft spot for TCGs. That being said, a few of my favorite board games are Time Stories and Betrayal (I LOVE being told a story when playing a board game). I’ve probably played about 30+ games of 7 Wonders, and I’d still eagerly play more. I also adore worker placement games such as Lords of Waterdeep, Viticulture, and Stone Age, which are a few of my favorites. Lastly, I’m playing a lot of X-Wing Miniatures too when I have time.

Diana: If you could sit down an play any board game with any person in history what who would you play against and what would you play?

Nolan: Oh wow, this is an interesting question. Well I’d definitely want to play a legacy game to maximize my time with this person. So Seafall with Sir Francis Drake would be one example. Another would be playing Resistance: Avalon with someone like Freud, which would probably be hilarious.

Diana: What projects are you working on right now? What can we look forward to seeing from you in the near future?

Nolan: Right now I’m working on finishing up Fate of the Elder Gods art, and otherwise just working on my personal project. The series I’m working on is called Astra, and along with lots of artwork I’m creating for the world, you’ll hopefully seen the rumblings of a game I’m also designing set in the world! This is all still very fresh though so we’ll see. So far I’m loving having my own project to work on.

Diana: Where can we see more of your art?

Nolan: You’ll find a lot of my artwork on my official site, and links to everywhere else! I’m also very active on twitter, and encourage anyone who’s interested in seeing more to follow me there! Thanks so much for asking all of these great questions!

Diana: And thank you so much for taking the time to chat with me today!

Is there an artist that you would like to learn more about? Let us know in the comment section below.